Thank you for linking to our photo gallery at the top of your post.

NJ.com reports that Jollibee is opening two more NJ locations, one in the American Dream Mall, and one in Jersey City spot at the Hudson Commons. Opening dates TBD.

That place is absolutely ridiculous but it is something I think everyone should try at least once. Spaghetti and fried chicken drive thru!!! Where else can you get that?

Spaghetti and fried chicken drive thru!!! Where else can you get that?

I’d guess in the Philippines.

So I found this in the Coupon Clipper about Zoni’s on Rt 35 in Middletown: 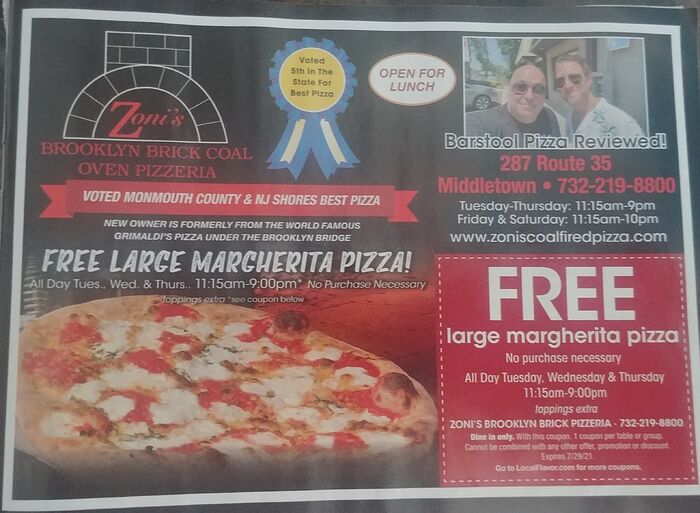 We all like to brag, but better than Una Pizza, Rosie’s, even Frankie Fed’s? Still I’m all for free pizza. Has anyone been?

This was the first thing I found when I did a search for Zoni’s:

I know he hit Luigi’s Lincroft and Marucas on Seaside boardwalk as well. But only thing posted so far was Zoni’s and Nicholas. Love how the guy in the Zoni’s review video bombed it and said go over to Nicholas for a great pie haha.

I enjoy zonis. It’s good and the wings were great. Haven’t been in a cpl years but it’s def good. It’s also def not the top place in Monmouth county. But it’s def been solid on my visits

This is only a few miles from me, so we went on Thursday. As you may have guessed from my profile picture,

I am not Jewish so don’t claim to be an expert on this cuisine, but I liked it. I had the reuben with pastrami. The pastrami was on the fatty side, but I am a glutton so like the fatty meat cuts. There was a fair amount of meat (though nothing like Harold’s) and I only ate half the sandwhich. My husband doesn’t care for pastrami or corned beef, so he had a tuna salad sandwich with Malaysian sambal. (They do have burgers, breakfasts and a few other things for weirdos like him). I also had a chocolate egg cream.

Stockon has VERY limited parking, so I suggest you go early during the week (they are open Thursday - Sunday). There were lots of cars with out of state plates, and lots of older people coming in escorted by their adult children. It was fairly busy on Thursday with maybe 10 people waiting in line to order at a given time, but you take a number upon arrival and they got through the line pretty quickly.

As expected with a new restaurant, there are some kinks with the service that need to be worked out. I was disappointed to see that the current menu does not include a side salad with each sandwhich (the pre-opening menu gave a choice of potato, macaroni, or health salad) and we only received 1 pickle with 2 sandwiches. Someone was walking around handing out dessert samples and Chef was stopping by tables to ask how people liked the food, so they are trying and I’m sure will get better.

It is a little pricey for what you get ($20 for a reuben, $14 for tuna sandwhich, and $5 for egg cream) but the Stockton Market in general is pricey and the owners obviously invested a lot of money in remodeling the space. I want to go again and try some of the smoked and cured salmon varieties as well as their soups, but will wait until all the out of towners have had their fill.

For months, I’ve been asking the crew at The Greek Spot in Ocean if they know what’s going in to the large empty (former laundromat) space next to them. The last time I inquired, they said “a food hall…” and it was said with great confidence. Today’s APP confirms that! At the risk of awakening the APP trolls, I’m just sharing a bit of the info:

The (owners of the building) have been renovating the space since the laundromat relocated last summer. The food hall will feature Japanese, Peruvian, Mexican, Venezuelan and Thai food, all prepared by New Jersey restaurants.

As of press time, (the owner) could confirm that one participating restaurant is Tumi Peruvian Restaurant in Elizabeth.

“These are five separate (restaurants) that specialize in their cuisine,” he said, adding that another could be added as well.

I, for one, am VERY excited about the prospects…

4 years ago, I wanted to do this same thing in Red Bank.

I still think this is a great idea!

The question is how will that impact the Greek Spot? I can easily see people thinking “if I’m going there let me check out the other place” and splitting their order, or worse, skipping GS all together.

Funny, I’m NOT worried about the G Spot! Every time I pick up from there I make the same comment–that place must be a gold mine.

Part of the reason I kept asking about the space next door was I was secretly hoping maybe they’d expand and have a small full restaurant!

APP “troll” here, just pointing out that reading a local site to see what people are talking about/interested in is part of reporting. I don’t come here to post links to our stories (though I politely request that members do, if they’re going to share our content.) I’m here because I love learning about NJ food, just like all of you.

I’m told by Dean of International Bites that the plan is to have the food hall connect to the Greek Spot (the work is still being done inside, at the moment). His family owns the whole building, so they want each component to do well. And he says the Greek Spot owners are excited; while the building isn’t great for foot traffic, new people coming to eat there is good for their restaurant, too.

Cool article about the Asbury Park Food Collective in today’s APP… the most interesting thing I learned was that it was started by the owner of MOGO! I follow the APFC and many of their tenants on social media; there’s a new Indian street food company that I’m hoping will start taking non-catering orders at some point. TBD!

If you live or travel in Northern NJ, DAS sells their samosas to Indian shops there. I’d be happy to send you a list.

Good article and excellent concept. The only disappointing thing about the APFC is the lack of retail sales at the location.

The ladies at DAS told me they sell to Patel Brothers in Old Bridge, Subzi Mandi in Hamilton, Hot Breads and Pakvaan in Edison, and Apna Bazaar in Dayton.

It is a bummer. Not zoned for it thought. Maybe one day!