As someone who has done PR/Marketing/Customer Relations for her entire career, I have to agree with the FB poster. While Nicholas can afford to lose plenty of people, it’s stories like this that tell me (a potential customer who has never been) about their attitude–and it certainly doesn’t make me want to rush there. And it has nothing to do with football (I could care less).

Do you know who actually made the comments? I am not sure since I’m not on fb. I can’t say for sure but I don’t think it was nicholas. I could be wrong but I’m just wondering.

It probably was Nicholas. He is a huge Giants fan. He even closes the Restaurant on the Sunday if the Giants make the Super Bowl.

That’s awesome. Good to hear. Freedom of speech: …use it while we still have it

I’ve never had marinated oyster, nor have I ever had them prepared in a similar manner but I could have never believed oysters could have such a non-oyster flavor.

Pickled oysters were very common in the 19th century. Used to be poor people’s food. 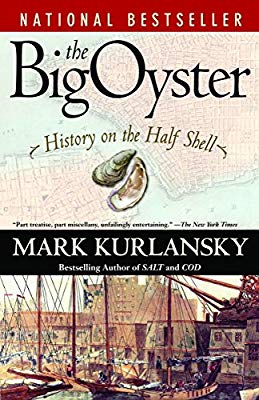 The Big Oyster: History on the Half Shell

Lmao at the weird directions this thread has gone in, but it is a thread …

So, we were at Bar N at Nicholas tonight. They have replaced the rotating three course bar special with a fixed tapas menu where you get to select three out of six items and also get a tasting of three ice cream flavors for dessert. I had fried mushrooms that were very good and not at all greasy, slightly spicy fresh fluke ceviche, and outstanding fried chicken nuggets in hot honey. This is still the best meal for the money in Monmouth County.

Ooh! We will have to try this. How were the portion sizes? I assume they do this only weeknights? Price?

Not large…Great food though. It ia probably the best spot in central NJ, but of course, you have to pay for it.

The portions were not too skimpy, especially for something labeled as “tapas” For example there were five big bite size pieces of chicken in that dish, and while I would have gladly eaten twice that, the three dishes made a good meal. I may be wrong but I think they also have this on Saturday and they are closed now on Sundays.

Do they ever serve chicken in the dining room? I don’t think they do, or not frequently.

AFAIK they always have had a chicken dish on the regular menu, but this is different. It was more like gourmet fried chicken nuggets, and that hot honey was so good I may have licked the plate clean when nobody was watching.

If you look at the dinner menu online, you will see that the first main course dish is roasted chicken. We had it years ago in the Bar Room. It was superb.

After a few month absence we ate dinner at Bar N at Nicholas last night. Much as I hate to do this I have to announce a downhill alert here. There are a whole bunch of things that contributed to this so let’s go one at a time.

Maybe they spread themselves too thin by opening an ice cream shop in Atlantic Highlands and recently acquiring the Little Red Store, also in AH.

Timely report for me. Bar N is/was on my radar for a meal tonite. May need to rethink.

What dishes did you guys have?

We went about a year ago and we weren’t impressed. We haven’t been back since. For that price point, I expect more. That is sad about the bread. I liked the bread basket concept.

I might be wrong but I think other people manage these. I believe he is just the money behind the operations.

Fwiw, I got my mom a gift card for mothers day and she said she had a fantastic dinner recently with my dad. In fact, she was blown away and said it was the best dinner they could remember in a long time. If my dad liked it, well that is saying something lol.

I just got her another gift card for her b day in November. They want me to come. I haven’t been in a while and will report back if I go.

Ps, I think I mentioned this but the bacon/bourbon chocolate ice cream was pretty damn good! You can get a sample to try first. I think this might be up your alley.