Ate a few sandwiches (and a hot dog) on a trip to New Orleans:

Central Grocery
Italian grocery store in the French Quarter where muffulettas were invented. I got a half muffuletta for the plane ride home (picture is of a quarter sandwich). They are pre-made and it was pretty quick to get one to go at the register. It also travelled well. By the time I was eating it a few hours later, the olive oil from the olive salad had soaked a little bit more into the chewy bread, but it wasn’t soggy. The bread held up well. Pretty good sandwich and a good amount of cured meats and cheese. It’s basically an Italian sub with olive salad on a round, dense roll. 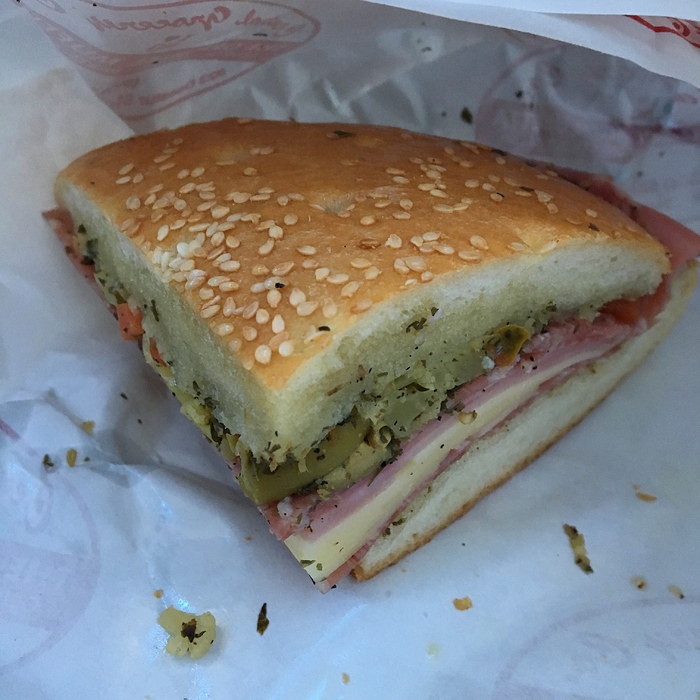 Cochon Butcher
Ate Cochon Butcher’s muffuletta here on my way to the WW2 museum, which is just a few blocks away. Casual service, you order at the counter and get a number.

It’s a large sandwich and only comes in full size, a bit smaller though than a full muffuletta from Central Grocery which could probably feed 4 people. I managed to put Cochon Butcher’s muffuletta away by myself with some effort. Soft, slightly warm seeded bread. Good assortment of salty cured meats (also warm) and cheese, and the olive salad was also nice and flavorful. In comparison to Central Grocery’s its bread is softer and less dense, and the meats higher quality. Not sure which one I liked better. 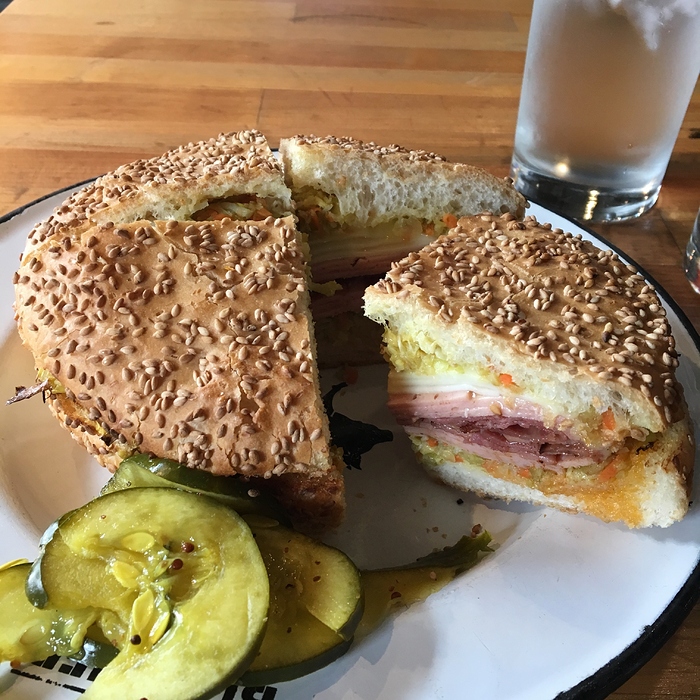 Domelise’s
Had a late lunch at Domelise’s. Had a half and half shrimp/oyster po boy, dressed, and a Barq’s root beer. The half and half is only available in large size, which is huge - about the size of 2 normal sandwiches. Portion sizes are very generous (I’ve found this to be the case throughout New Orleans). It was constructed so that half of the sandwich had shrimp, and the other half oyster. A little bit of crystal hot sauce was sprinkled on top of the fillings.

Despite the size I didn’t get overly full off of it, maybe due to the bread (Leidenheimer roll I think), which is quite light and airy inside with a crispy crust. The fried shrimp and fried oyster fillings were very good and fried perfectly golden. Very good sandwich. 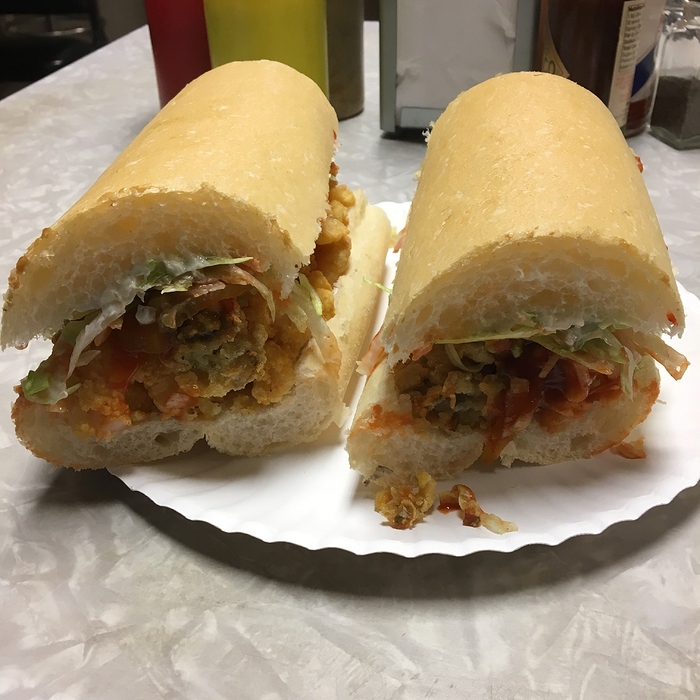 Parkway Bakery and Tavern
Went here for lunch. On the day I went they were offering special thanksgiving po boys with turkey and stuffing. I ended up getting a fried shrimp po boy and the roast beef with gravy from here.

Golden Fried Shrimp Po Boy
Really good. Shrimp were fried perfectly and there was a good amount of mayo. I think I give it a slight edge over Domelise’s (small sample size of 1 sandwich from each place though). 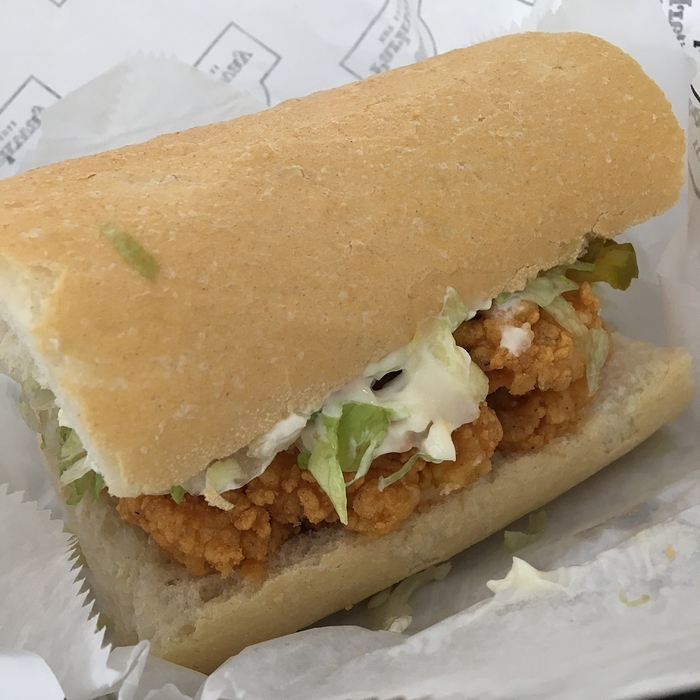 Home-Cooked Hot Roast Beef with Gravy Po Boy
I might not be a fan of their roast beef debris po boys. Maybe I just got a bad one. The roast beef in my sandwich was a little stringy and in somewhat thick chunks, similar in texture to beef stew. The gravy also was a little bland, maybe could have used some salt. 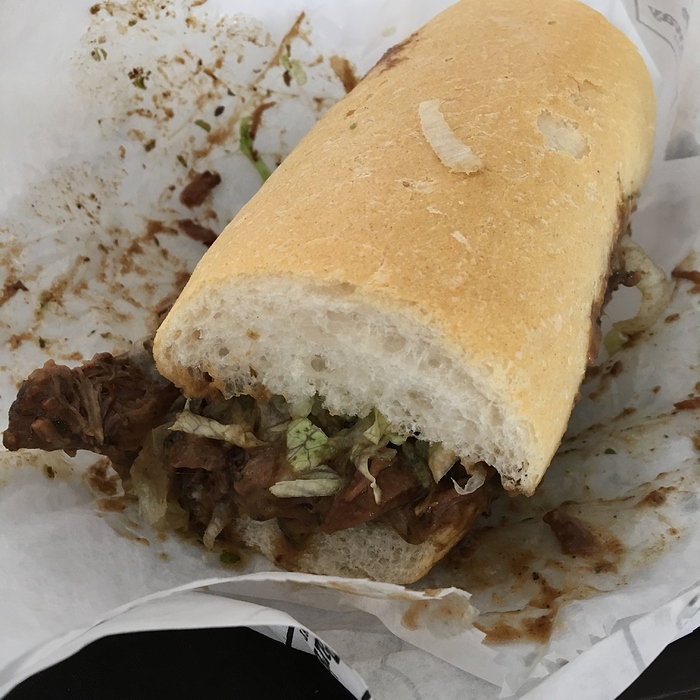 Killer PoBoys
Went to Killer PoBoys in the French Quarter for lunch. They also have a window at the back of the Erin Rose bar a few blocks away. They sell non-traditional po’boys and even have a vegan option. Had the glazed pork belly po’boy. Topped with an aioli cabbage slaw. I liked it. The glaze was sweet and pork rich and fatty, but balanced by the slightly sour lime slaw and garlicky spread. 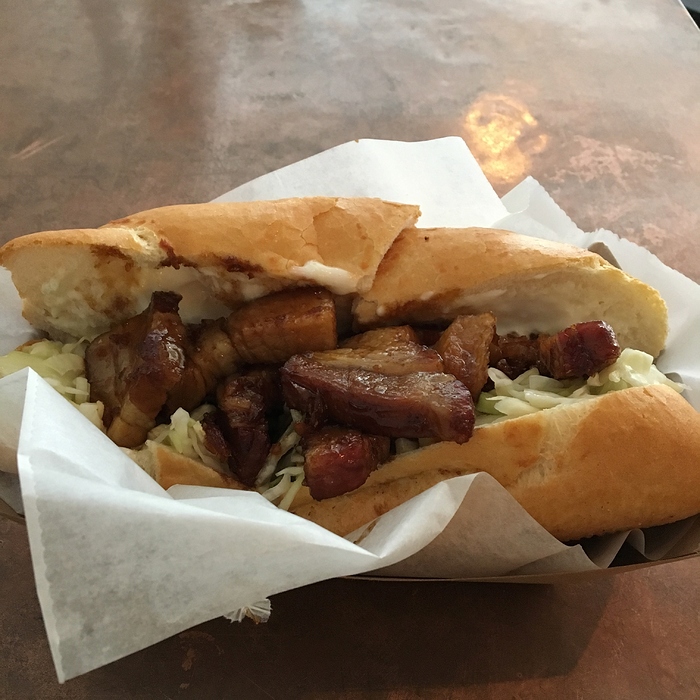 And a Hot Dog

Dat Dog
Went into the Dat Dog on Magazine St. to have an afternoon snack after taking a walking tour of the Garden District. Pretty quiet in the afternoon. Nice space with a large open air patio, and a bar.

I had the crawfish sausage, with chef’s choice toppings. It was really good. Had a soft, pillowy bun that was a little sweet. I believe the sausage is made of pork with crawfish, and it was juicy and fatty with good snap. It was nice to be able to have the chef choose the toppings as I often get the wrong things or weird combinations that don’t work when left to my own choices. Had jalapeños, bbq sauce, some sort of yellow sauce that maybe had some mayo in it, tomatoes, and a lot of bacon bits. They did a good job dressing it. 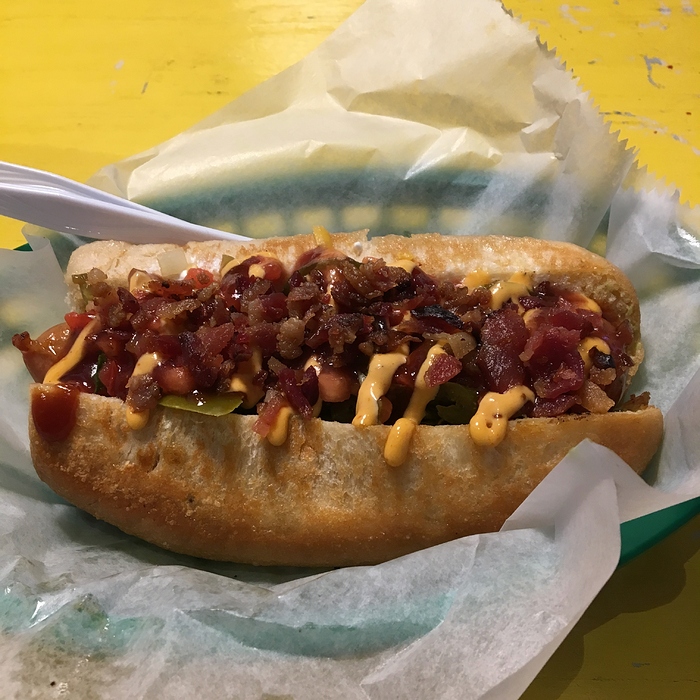 Rum and ginger lime glazed pork belly and seared gulf shrimp poboys, both really good. To me, based on the bread and shredded pickled veggies these are more banh mi than poboy, although I’m not clear on where the line is. 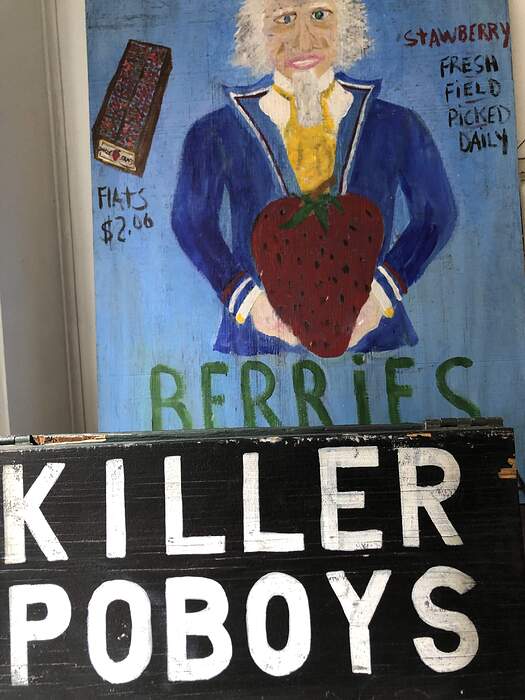 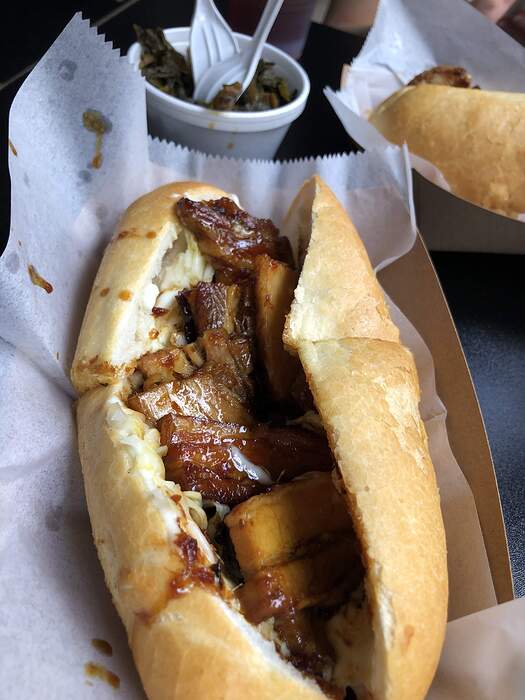 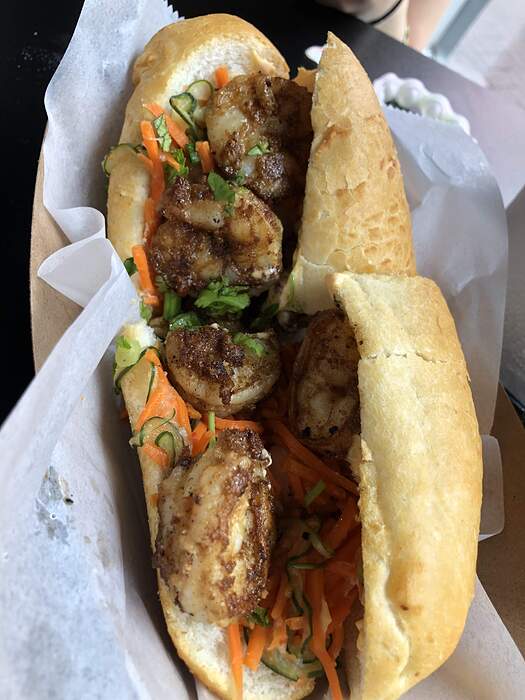 SO jealous of all of this!

although I’m not clear on where the line is

Excellent report and pics, Mr. Happy. Just seeing this. A reviewer here wrote some years ago that the way to experience a muffaletta is to get one to eat right away if you must, but get another on the way out of town, throw it in the back seat of your car, and by the time you get home to Houston, it’ll be ready to eat. Olive salad soaking in to the bread is a must.

There is a blogger from NOLA who undertook to sample every po’boy available. maybe 500??? I don’t know how far along he is on that but I think he’s only middle-aged. I’ve tried to interest him joining HO but maybe his experiences on CH soured him completely on message boards and he hasn’t taken me up. He was Scrumptious Chef on CH, blogged from Austin for years but got fed up with it and moved to NOLA about 10 years ago.

Bread certainly would make a difference. There are places here (Houston) Vietnamese owned, that use French baguettes, which are crustier, heavier and chewier, and others that use a locally produced loaf that is a knockoff of the NOLA baguette (but not quite as good) I prefer the ones with rice flour.

Pickled carrot and daikon and cilantro are also key but with the Vietnamese element in NO, there’s probably a lot of crossover going on.

Rum and ginger lime glazed pork belly and seared gulf shrimp poboys, both really good. To me, based on the bread and shredded pickled veggies these are more banh mi than poboy, although I’m not clear on where the line is.

Looks good! I want to get back to New Orleans, its a great food city. Hope you are having some more good eats there. Re: banh mi - I’ve read that in New Orleans sometimes banh mi are called Vietnamese po’ boys!

Yes they are and variations are called po mis.

get another on the way out of town, throw it in the back seat of your car, and by the time you get home to Houston, it’ll be ready to eat. Olive salad soaking in to the bread is a must.

We did that in the previous Millennium on the way to the airport. After inflight beverage service started, opened the Central Grocery treasure and within a minute you could hear necks craning to identify the fragrance’s source. Flight attendant commented that the line to inspect would be longer than any line ever to use the lavatory.

I did the same thing years ago and was the envy of the plane! 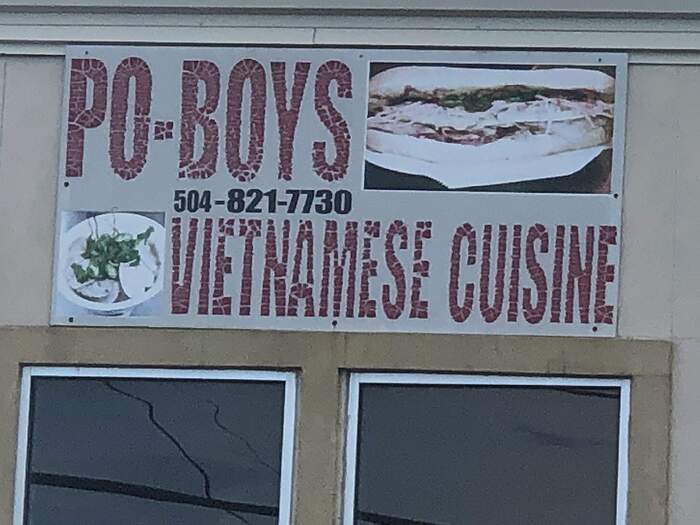 fried shrimp po boy and the roast beef with gravy

Surf and turf - best of both worlds! This is a small and I was stuffed, can’t imagine finishing a large. 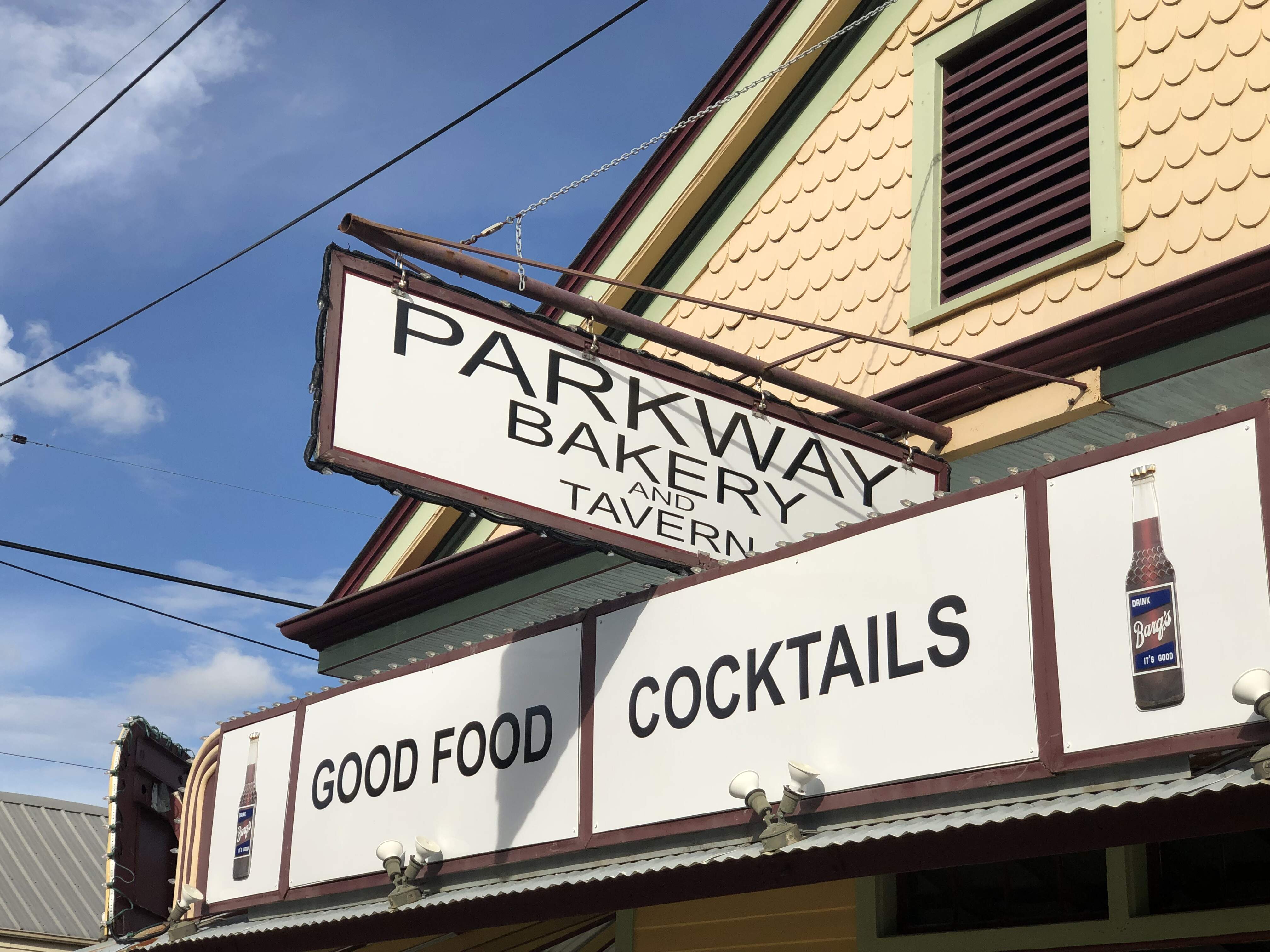 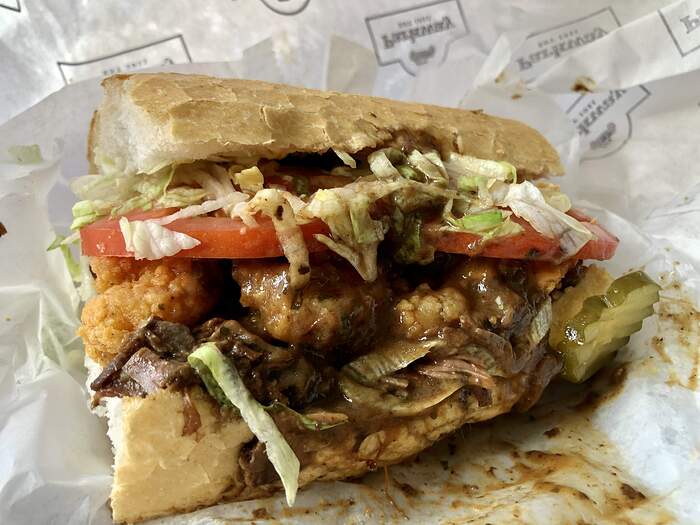