Narragansett RI 2021: More of the same plus one new recommended joint

last week it was back to my family’s annual weeklong excursion to Narragansett after a pandemic year off, which was great after the Year That Was. mostly though, I completely failed to do a lot of new to me food stuff–I did read a bunch of books and I watched LOTS of Euro 2020 soccer games, but I got real lazy (I may have warned you) and didn’t venture out all that much beyond walks on the beach and a round of old reliables. (A rental car snafu also axed a planned pizza tour of Cranston on the way down). Did I go to Anthony’s in Middletown? Nope. Did I finally get to Matunuck Oyster Bar? Nope again!

So mostly I’ve failed you all on much new intel. Go back to my Narragansett post from 3 or 4 years back and you can probably get the lowdown on a lot of what I ate. Clamcakes, chowder and a fair lobster roll at Iggy’s, clam roll and fried squid at Monahan’s, excellent ice cream at Brickley’s in Wakefield, bought clams for a home meal at Ocean Catch, an OK patty melt at local greasy spoon Meldgie’s, some pizza strips and a decent calzone from Colvitto’s.

But I’ve got a couple things. For a non food place, we took a walk in Kinney Azalea Gardens, for which we were a little late for most of the flowering, but was still quite nice. It’s a cool little botanic garden/nursery in Kingston, good for a half hour stroll and amazing if you’re in the market for plants. We also stopped at Green Line Apothecary in Wakefield for a cherry phosphate one day–only worth doing if you’re up for old timey soda fountain stuff, but fun. They really do have a vintage soda fountain set up in there.

I was also in the mood for pizza after having not been able to stop in Cranston on the way there. Pier Pizza in Wakefield does an OK NY style that we ate one day (it’s also just steps from Brickley’s), but I wouldn’t go out of the way for it. But the real surprise winner was Pasquale’s in Wakefield, a place that serves up a pretty fantastic Neapolitan style pizza. We got the margherita with the buffalo mozzarella, and frankly it was damned amazing and probably the best thing I ate all week. Warning: you’ll have to listen to syrupy RAI style music if you sit inside–but it’s worth it. 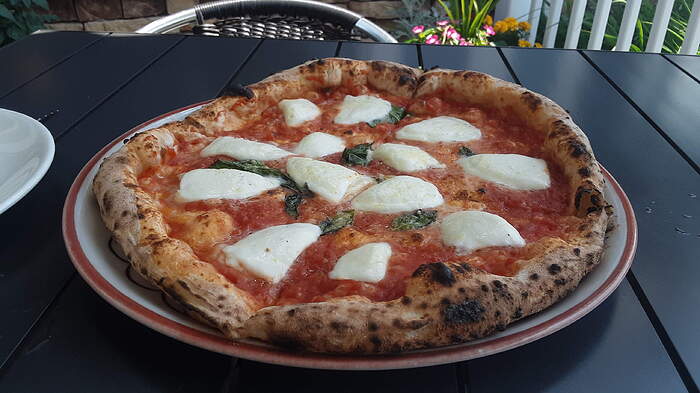 Oh, I forgot this–the people who run Pasquale’s also run an Italian deli across the way in the same weird commercial/residential complex in Wakefield. It’s called Neapoli’s and it’s good for a stop if you’re there. Nice prosciutto selection and Italian products of various varieties.

Thanks so much for posting. We are going for the first time over Labor day so I will make note of the spots you mentioned.

@passing_thru I felt like you were personally apologizing to me, as if I’d be offended that you didn’t act on my recommendations. No way, man! It sounds like you had a great week. I’m definitely putting the soda fountain and Pasquale’s in my back pocket for our next trip to South County. Thanks for the fun and funny report. But what the heck is RAI-style music?!

That pizza pic made me drool. Sounds like a very relaxing week, discoveries can be made another time.

@digga haha, no I wasn’t really apologizing–it’s just that you and Uni talked about both of those places and I said I’d never been to either on 15 or so trips down there and I really meant to go to them and then…didn’t! I was mostly feeling sheepish on my own account.

RAI is the public tv/radio broadcasting company in Italy (I used to even get with my old cable package in Somerville). They play a lot of contemporary Italian pop, which I think is pretty bad.

We are going for the first time over Labor day so I will make note of the spots you mentioned.

Cool! for what it’s worth, my post from 2018 is here and has a little more detail on spots skimmed over above and some other bonus info. I think the only thing really out of date is that the Maharaja restaurant is closed permanently. Have fun!

Edit: I just re-read my old post, and I guess all I did on that vacation was read, walk on the beach and watch international soccer. Plus ça change, plus c’est la même chose!

Enjoyed your report! I have a feeling that our summer vacation this year is going to have a lot in common with yours. Relaxation will be the main event and that’s great.