Nari is a new high end Thai restaurant located in Japantown in San Francisco. It’s been open about a month. The owner is Pim Techamuanvivit. Pim is quite a busy restauranteur these days, she also started and runs the successful Kin Khao in the financial district and is now in charge of the well regarded Nahm restaurant in Bangkok.

We ate dinner here a few weeks ago. Pim was there and we had a chance to talk with her again. She is a passionate and consummate food artist and very nice. Overall we had a great meal. It’s been quite a while since we have been to Kin Khao so it was difficult to compare the two. Here is what we ate:

Fried bites of Northern Thai head cheese. Sort of like a croquet. It was good but not the highlight of the meal.

Squid and pork jowl. This was one of the most delicious things we have eaten all year. The unctuous pork and tender squid paired magically with the vibrant Thai flavors. 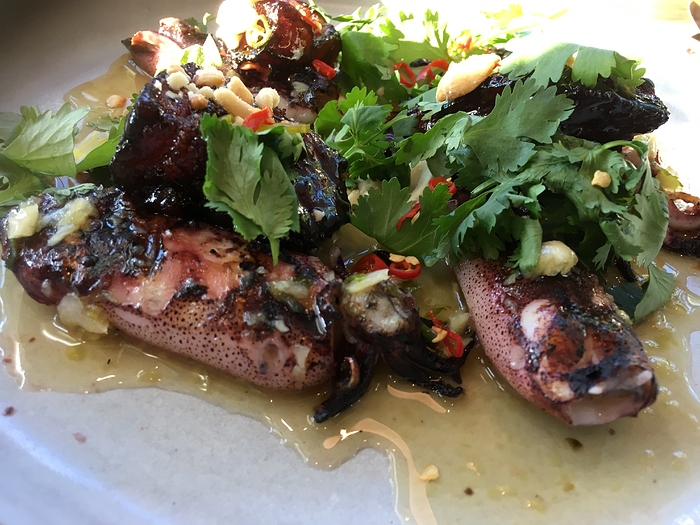 Namprik ong. Namprik ong is a dip made with pork popular in Northern Thailand. It is typically served as a condiment for dipping rice and veggies into. The version here was made with early girl tomatoes and was served with a wide array of veggies and herbs to dip. We also ordered a side of sticky rice for dipping. It was excellent. 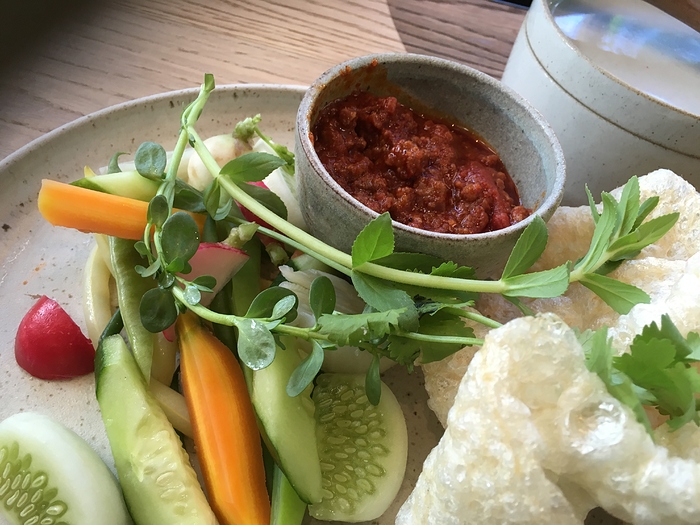 Mussel curry. A debut item on the menu. This dish put every other mussel curry I have had to shame. Not as soupy as some mussel curries it was redolent with satisfying and warming Thai curry flavors. This tied with the squid and pork for our favorite dish. 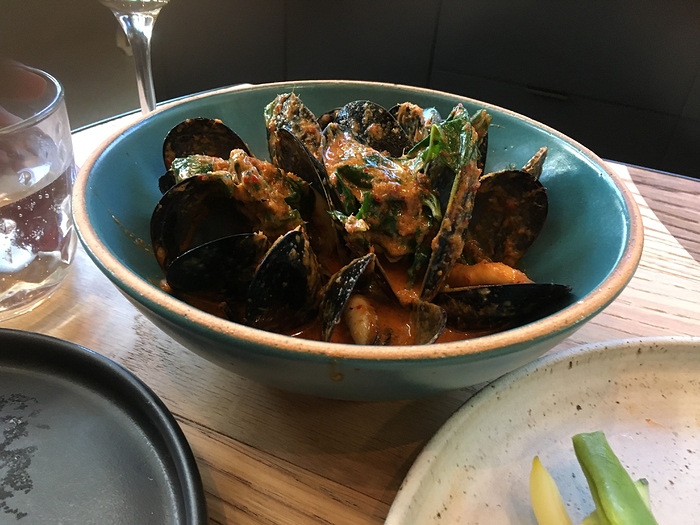 Corkage is $40 (ouch!). We brought a bottle of wine but saved it and instead had cocktails which were good and a couple of glasses of wine.

A couple of meals from Nari, from about a year apart. I kept forgetting writing about my meal there from November 2019, even though I thought that meal easily qualified Nari to be the best Thai restaurant in the Bay Area.

Miang- which according to the menu: persimmon, trout roe, pomegranate, makrut lime and sea sauce tamarind caramel served on betel leaves. Its a combination of savory, sweet, tart and yum. 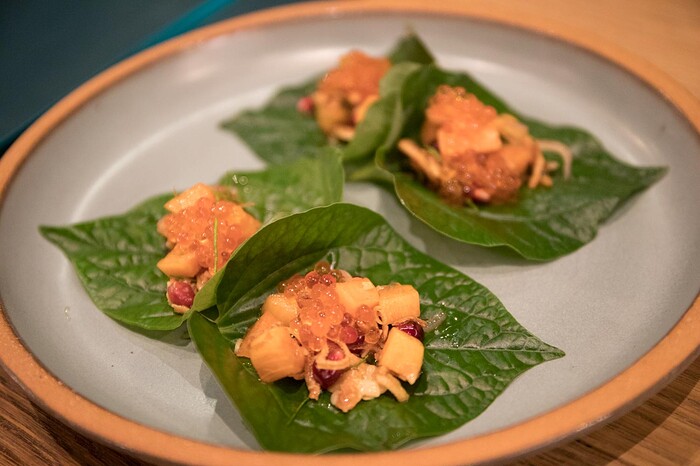 Squid and pork jowl. Just like @geo12the said, its delicious. 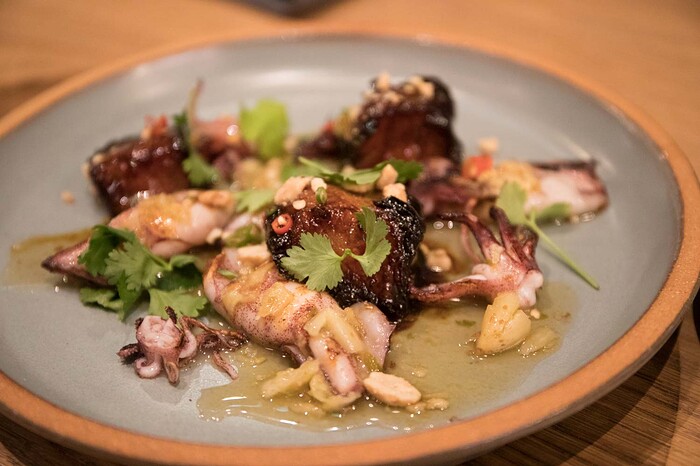 Don’t remember what this was called in Thai, but its charred lettuce. Probably the priciest lettuce I’ve eaten but it had plenty of wok hay and its yummy. 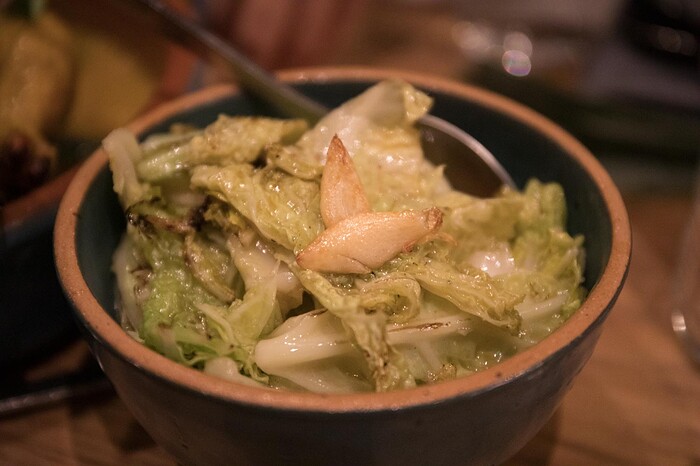 Gaeng rawaeng- I was debating before ordering if we should even consider spending $47 on a cornish game hen. But it was my favorite item of the meal. The chicken was VERY tender, juicy and succulent, and the tumeric- rawaeng curry paired perfectly with the game hen. Came with a piece of roti. I asked how they managed to keep the chicken that tender and the answer was they sous vided the chicken first before finishing. And it avoided the mushy sous vide meat syndrome. Highly recommended. 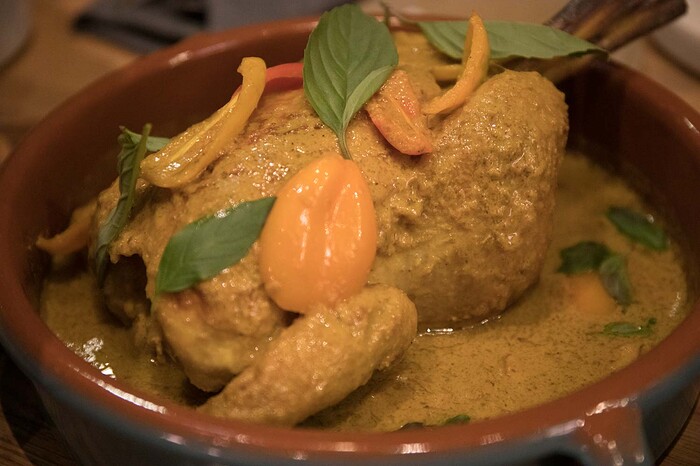 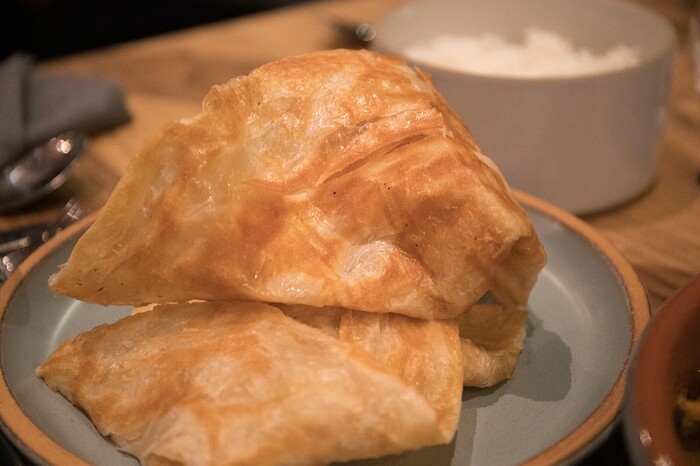 Unlimited refill of rice. That and the chicken easily fed four.

Aaharn is David Thompson’s latest restaurant adventure after he left his well-known Thai restaurant in Bangkok. Its located at the Tai Kwun - Centre for Heritage and Arts in Central, Hong Kong, formerly known as the Victoria Prison. It opened late last year. Thompson now traveled here from his Bangkok home a few times a year. Amuse-bouche: Minced pork chicken and shrimp, caramelized palm sugar on pineapple. At once spicy, sweet, nuanced and funky. [_D3A7437] Banana blossom salad with pra… 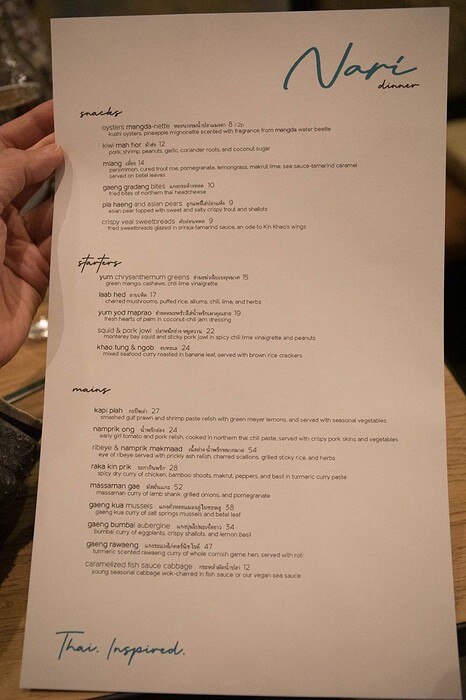 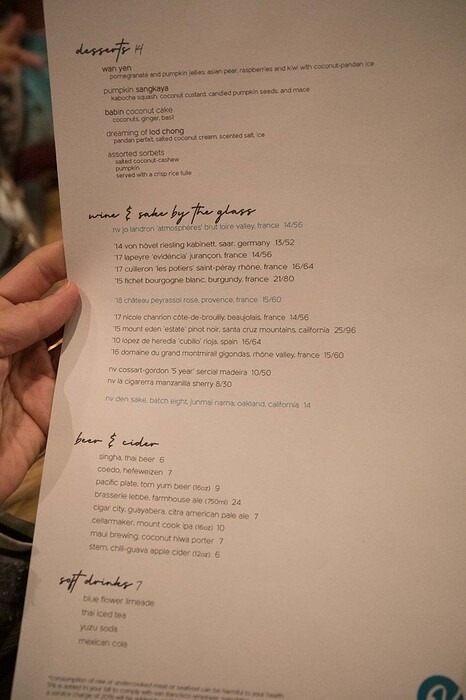 Last month’s meal was from late December. Nari now have two set menus when they are open- a meat option and a vegetarian option. I got the $43pp meat option that evening for with a two person minimum. For the most part I forgot about my 2019 meal already other than the game hen, but was happy to see the game hen as a choice. 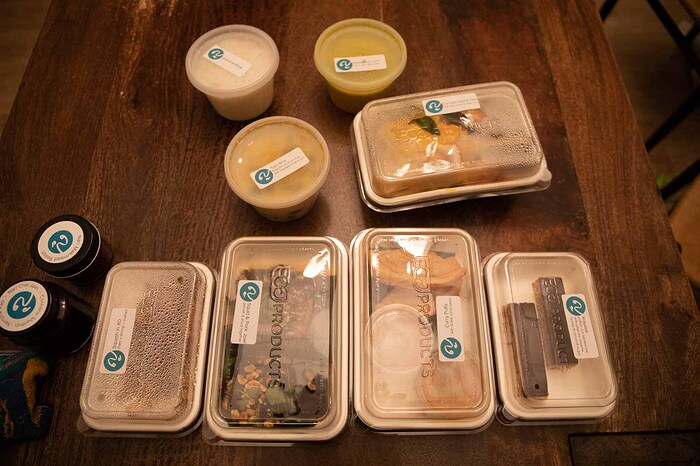 The game hen was substantially less successful this time. I don’t know if it was because of the takeout box, but the game hen was a bit dry and overcooked. Its still pretty good, but it went from very good last year to nice this year.

Squid and pork jowl again. The best item of the meal. 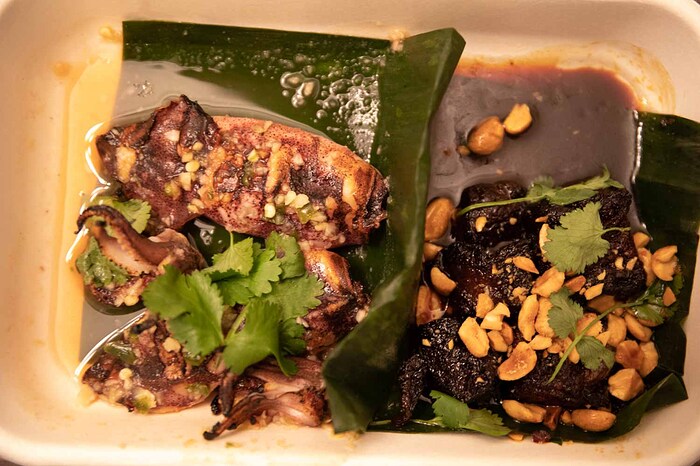 Squash with XO sauce. I thought it was fine. The XO sauce was perfectly fine. But I didn’t get a Nari meal to eat XO sauce when I could have eaten it in a Cantonese joint. It came with the meal. 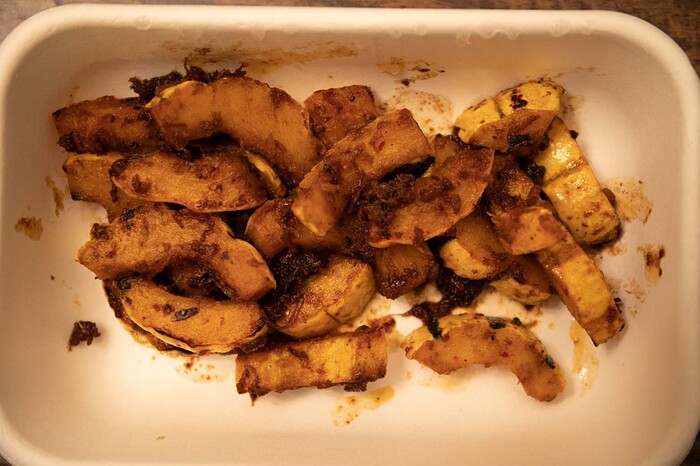 Tom kha- coconut based soup with maitake mushroom. By itself its a nice soup. As part of the set menu with the game hen curry, I thought the coconut flavor duplicated. There was no contrast between the soup and the curry. 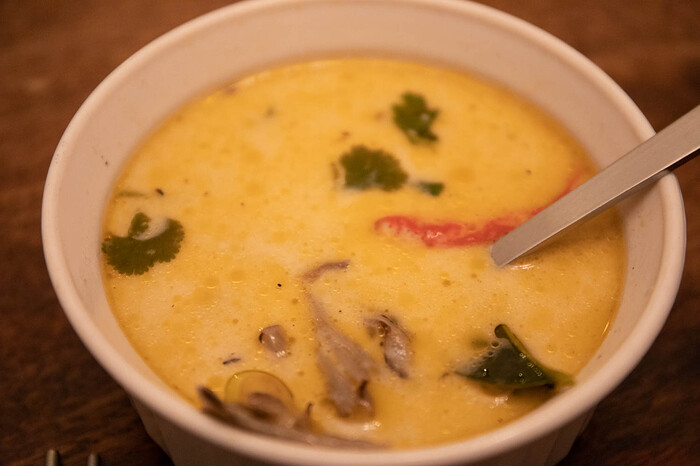 Does anyone know what the heart shaped leaf in the soup was? 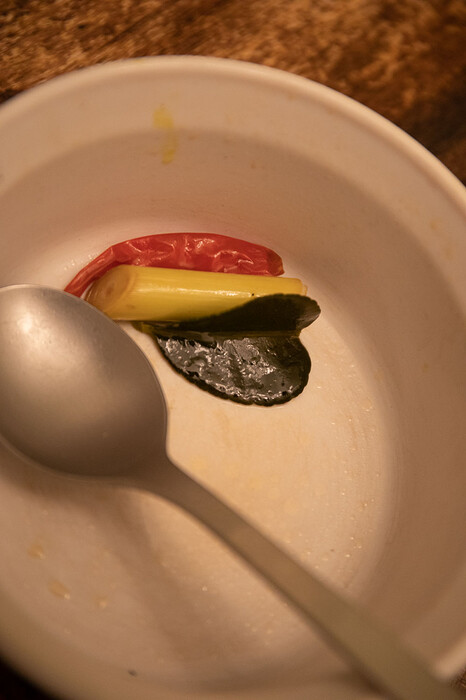 Curry puff was an addon, and actually outshined everything else except the pork jowl.

I forgot what the dessert was but its some sort of chocolate bar with grains including rice. It was fine. 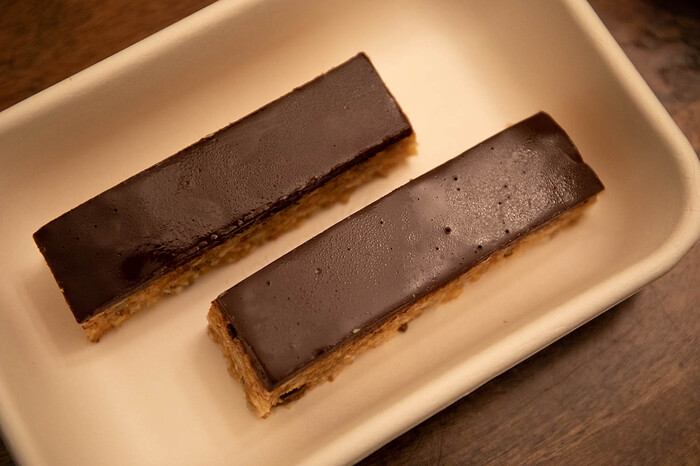 I also got a jar of chlii jam and a jar of the makmaad relish. The makmaad relish is delicious. Best described as a thai equivalent of XO sauce since we just had the XO sauce. Haven’t opened the chili jam yet.

So overall, a pretty nice meal with quite a bit of inconsistencies, cooked at a level which I would describe as a good, but pricey, neighborhood Thai restaurant rather than the best in the Bay Area. I was really looking forward to the meal. But that chicken got outmatched by the succulent el- cheapo chicken sticks from Cambodian Street Kitchen a few days later. Which was a heresy given the price. So that was a bit of a bummer.

Lower half of a Kaffir Lime Leaf 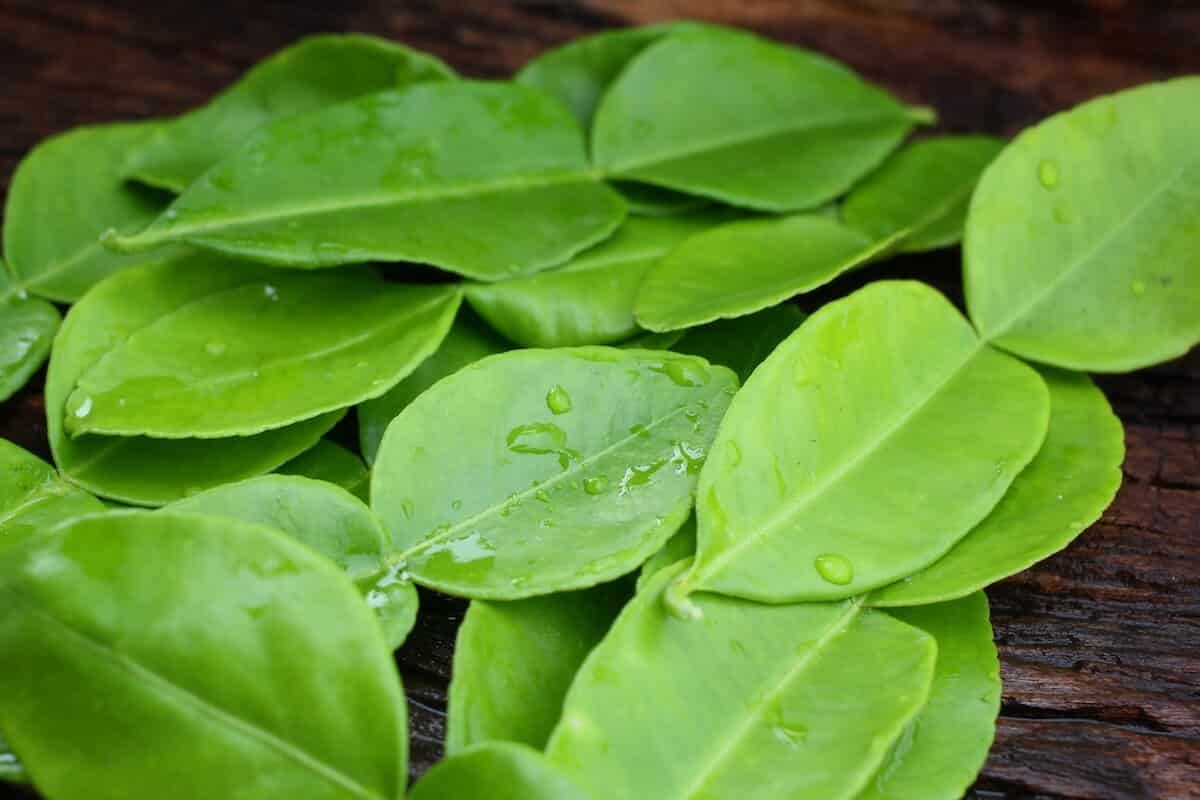 Thanks! The little notch on the leaf threw me off. I thought its a leaf with a different shape than kaffir. 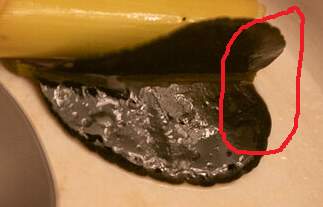 Glad to help. Sometimes the lower Section of the Leaf is more deeply “scalloped?”. That Photo is not a great Example.