My Dry January has gotten all wet

Anyone else trying to do a dry January? I started off strong. Got past the shakes pretty easily.

But last night had a wonderful dinner so I wanted a glass of wine to go with it and poof, my 20 day streak came to an end. Once that first glass was gone, I figured what the hell time for some whiskey.

Have a dinner tonight with some friends so I think I will pick myself back up on Sunday and limp across the finish line after having fallen down twice.

That’s why I never started. I am aware of studies that claim doing a dry month might mean fewer drinks for the rest of the year, but I don’t buy it.

Just like anything peeps do for a month - be it Whole30 or similar diets or “cleanses,” bc most folks can’t sustain anything that’s a radical change to what they’re accustomed to.

Baby steps & changes that are possible in the long run seem far more reasonable to me.

My idea of dry January: 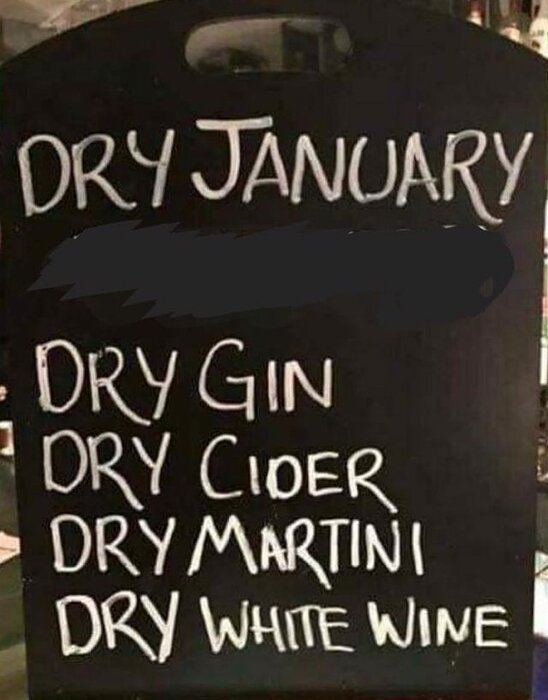 640×817 62.2 KB
Have never done it. Why would I want to deprive myself of this little pleasure of enjoying a glass of wine or a beer whenever I please?

I don’t drink more than a glass of wine or a beer, or sometimes both, any given day anyway. Unless on holiday… that’s when I can drink 3 times my capacity (mostly because I have a limited time there and the beer or wine is not available at home).

I’ve been dry all January so far without much intent, and I have to admit I don’t miss a drink unless I’m with people who consider drinking a core part of spending time together (and so get extremely uncomfortable if one refuses to partake-- (yes, that means all kinds of things about them, I know

I think I’ll get through till next weekend, when those people become a factor again, because one of them has a birthday

In any case, having a glass of wine because it goes with a lovely dinner, and so on, I don’t think that’s a fail.

I drastically cut back on alcohol a few years ago (because of an odd allergy issue that couldn’t be diagnosed but was highly correlated with consumption) and haven’t really missed it in that quantity. I still drink, when something appeals or an occasion calls for it, or I have a hankering for something (like an old fashioned or a sauternes).

I think dry January is positive for those who need a reason to cut back, just like all those other January things. It’s nice to have a reason sometimes.

No reason you can’t make up the fallen week and take it into February!

Hmm, maybe I have a problem then if no one else feels the need to clean up.

This past holiday season was finally back to normal after the covid inhibited celebrations of the prior two years. So at least for me starting with Thanksgiving, there were a lot of events to meet friends and family and coworkers and clients and drink. Had not seen a lot of people in over two years so there was even more reason to celebrate. Once I get past new years, I find it helpful to cut back and have a goal. I know I certainly sleep better and more soundly when I don’t drink. Also means I can work out with a little less intensity as I don’t have to offset the extra calories from the drink. I like the suggestion of just making up for the bit of lapse with a push into February.

Instead of dry January, which I’m not sure I could manage, I’ve cut my consumption in half by spacing my drinks with water. It’s not as good as abstaining altogether, but it’s something.

In years past I had parties and gatherings darned near every night feom Thanksgiving thru New Years, so a dry January was welcome (i could almost feel my liver pisting strike notices)

This year was very quiet, so I did t feel horribly guilty at having a glass of wine a week later. I tend to bot erink by myself, so theres not much temptation.

What a strange crowd.

I tend to bot erink by myself

Doing my first Dry January. It’s been a good opportunity to break mindless habits, explore new interests and pleasures, and take a hard look at what’s really necessary to have fun, and why. I don’t regret it, but different strokes. I don’t see much in the way of downsides. Livers and brains thank you.

My dry January lasted 10 days. It was mainly to lower my blood pressure before a drs appt. and blood work. It didn’t help much this time. I usually only have one cocktail and one glass of wine so dry January wasn’t a big deal for me.

Its the damned autocorrect elf again. Out to convince the world I’m drunk and illiterate.

I was having a dry January only because I was out of beer & waiting for it to go on sale.
Until… I received my anniversary gift from Sunshine (today)!!
YEAH!! I don’t know what 11 years is supposed to be, but I got BEER.
I got her a coral necklace and matching earrings.
We are both very happy with our gifts!! 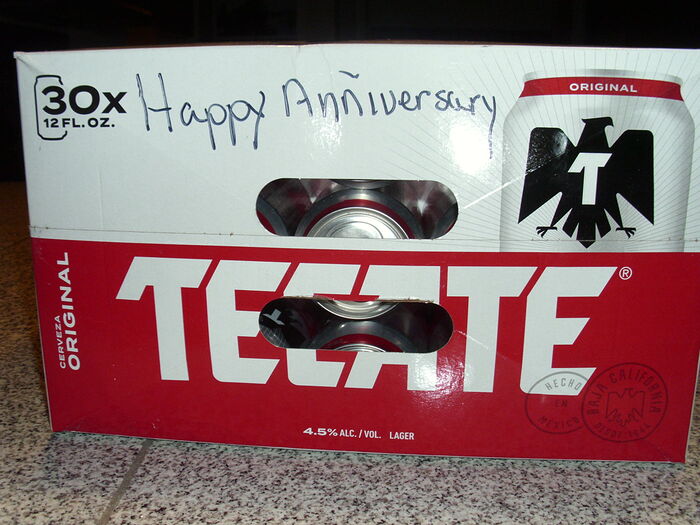 Yes, first time trying dry January, so far so good. I did eat a gummy last night though, so I’m not sure if that breaks the rules.

Sounds like we ended our dry January on the same night for the same reason! No shame in my game, though

I’m not sure if that breaks the rules.

OK, well I’m going to consider that an official ruling then!

Awesome, come live here and persuade my family of the same, please

Also how on earth did you go 20+ days before getting out a gummy? I think it was like day 4 or 5 for us…if that