Cooking Papa in Mountain View just reopened under new management. They are in soft opening mode from Dec 18th to Jan 18th. I swung by and wanted to eat lunch there. I was given a menu to look at by a server. I asked what the specialty was and I was told the roasted duck (and roasted duck rice). And the duck did look nice.

The menu looked a bit more condensed than before. Though it retained quite a bit of the old favorites. I saw a couple of familiar servers. After holding the menu for a while, I asked the server when a table would free up. She said they were cleaning the table. After another 5 minutes, with nothing much happening, I asked again and was told this time that they were waiting for a table to open up. Looking at the tables, none of them looked like they would be wrapping up soon, and they hadn’t opened up the seating section near the bathroom, so I left. Almost all tables were 4 person tables with many only had 1 or 2 seated. The tables were spaced widely apart. So they definitely could use some optimizations.

I came back to pick up to-go orders a couple of days later. Chatting with the servers, they said that all the chefs were new. So we’d have to do some sleuthing to understand their strengths since that means 2.0 is essentially a completely new Cantonese restaurant.

The congee was really good. One could clearly taste the pork broth in the congee base. Delicious.

Decent. Though a little on the dry side. I recall the old version was better.

Wonton noodle soup used to be a relatively strong point at Cooking Papa 1.0. The version at the new CP was disastrous on multiple levels.

The broth- tasted weird and unpleasant. Tasted nothing like the deeply satisfying tile fish-based broth that a proper one would have. Not sure what went into it. Discarded all the broth.

The wonton- the minced pork contained many unchewable tendons and I had to spit many pieces out. Low quality meat filling. The shrimps were of average quality.

The noodle- didn’t make it into my to-go order. I called them up, told them about it, and told them to reverse the charge for the dish. They asked me whether I could go back and pick up the noodles. I said no and told them to reverse the charge. The manager later called and said he’d try to reverse the charge and if he could not, he’d comp us a crab next time. I don’t see the charge being reversed. I think there’s a lot of inexperience at the hostess desk, both in terms of waiting experience in the first visit, and in the to-go order packing in the second visit. They had a lot of kinks to work out. I am not out to extract a crab from anybody, and I’d much rather that they fix their wonton noodles, or take it off the menu entirely.

With or without noodle, the wonton noodle soup was an embarrassment, and might be one of the very rare times that I’d send a dish back to the kitchen if I was dining in. I could live with opening hiccups like forgetting noodles (even though my hungry young daughter didn’t very much appreciate the noodle went missing), but the wonton noodle soup dish was beyond redemption and I am not sure if time can fix that.

The wait time for the order was very long- more than half an hour.

If anyone has been back, what is good? I will go back to try other dishes and the duck because its not far for me, but I will wait a little bit for them to iron the kinks out.

They don’t yet have dimsums. 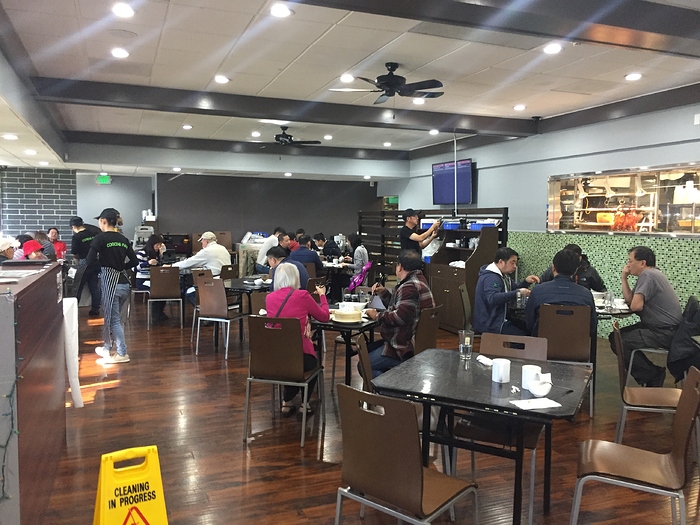 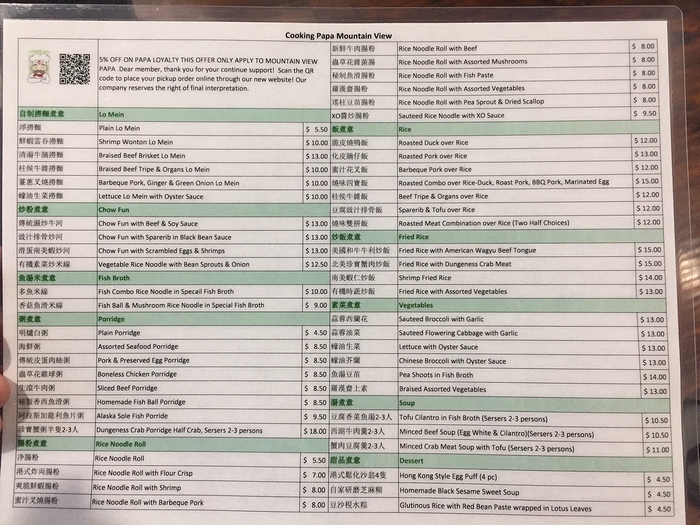 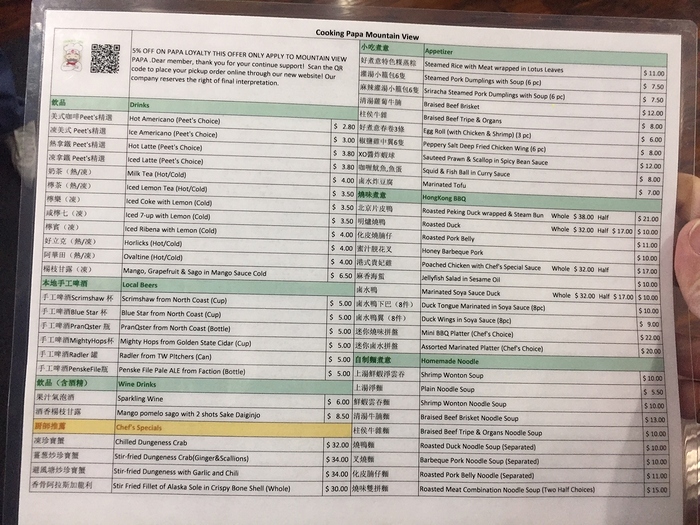 We spoke with the managers and they are focusing on fresh ingredients without preservatives, MSG, and non-natural chemicals (like Prague Powder). Also there is a focus on less sugar/oil in their dishes

The bulk of the dishes are far lighter than before (this is because there is no more MSG addition to each dish). We had the mini-BBQ platter which was actually much better than the old Cooking Papa version. The soups and congees tasted “lighter”, as did the fish and other veggie dishes.

We’d go back, the dishes are great for light brunch fare, here’s an image of what we ordered: 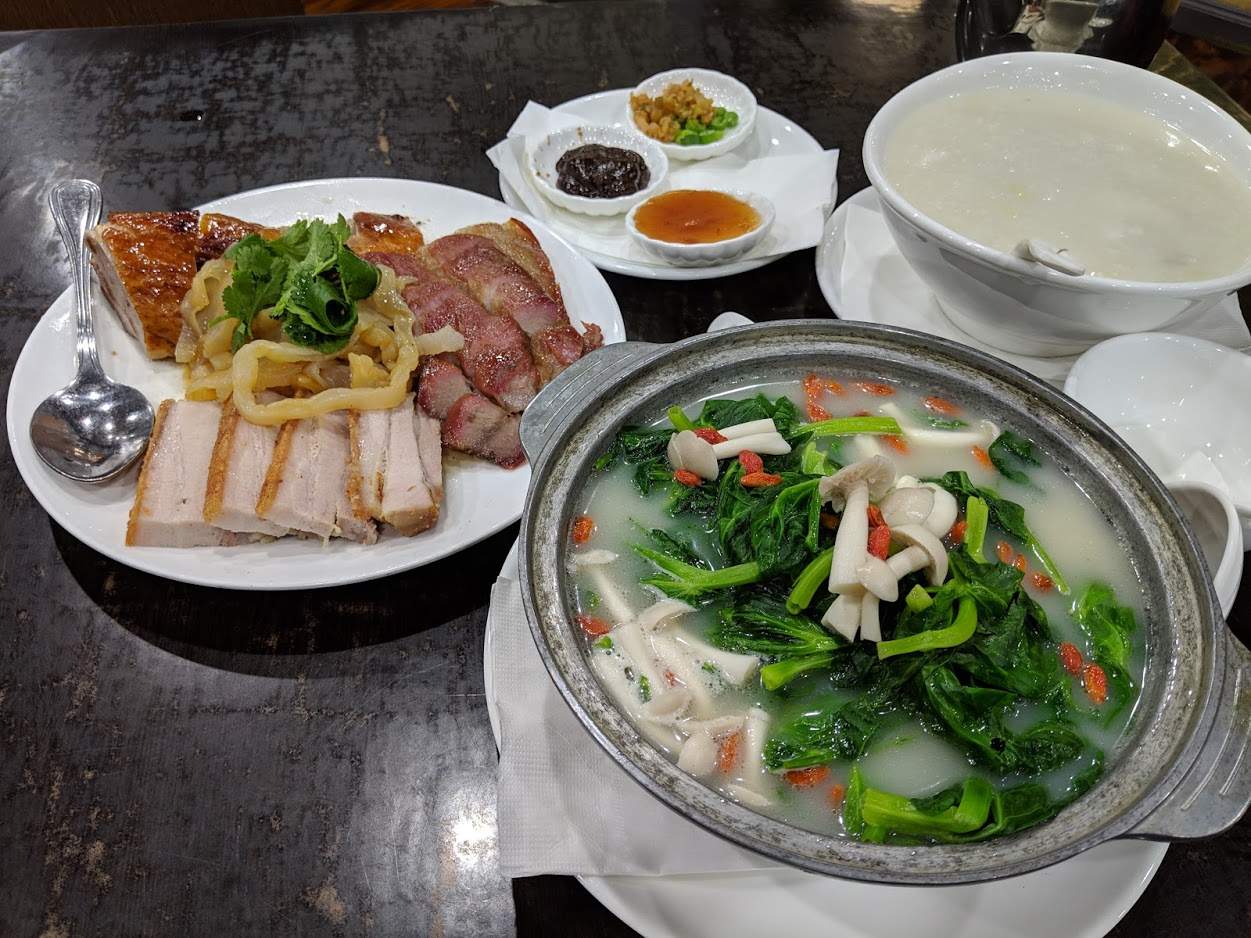 Good to hear about the quality of other food.

What is the fish that’s used in the congee? The type with or without bones?

What kind of soup dumplings? Jiaozi? or Xiaolongbao?

Sole fillets in the congee (boneless).

Soup dumplings are translated from xiao long bao (xlb), so in this case, pork dumplings with some soup inside.

Jiaozi are generally dumplings that have been boiled, but some also call them fried dumplings or jian jiao (commonly known as gyōza).

Any idea if it’s just this branch that changed over?

I believe so. The new website is specific to the MV branch.

They’re in the process of transitioning all of them, the Mountain View one is where they’re testing new recipes.

Do you happen to know who runs the new Cooking Papa? What other restaurants did they run in the past?

Oh No! I’m gonna run to the Foster City branch to get some of my favorite congee of all time, the Chicken and Roasted Duck Porridge, while it’s still available. I am addicted to the stuff, and the MV menu does not have it. Not good news for me.

The MV one has empress chicken and roasted duck. Perhaps even if they switch to the new menu, you can just ask them to make it for you.

If you go, can you ask when they are transitioning to the new menu?

Congee with pieces of chicken thighs and cordyceps flower. This tasted a lot with a lot less pork bone flavor than the thousand year old egg congee from last time. It was decent. 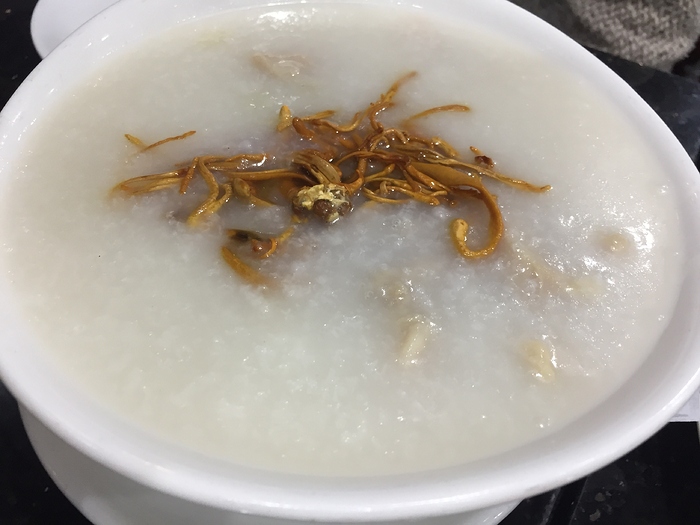 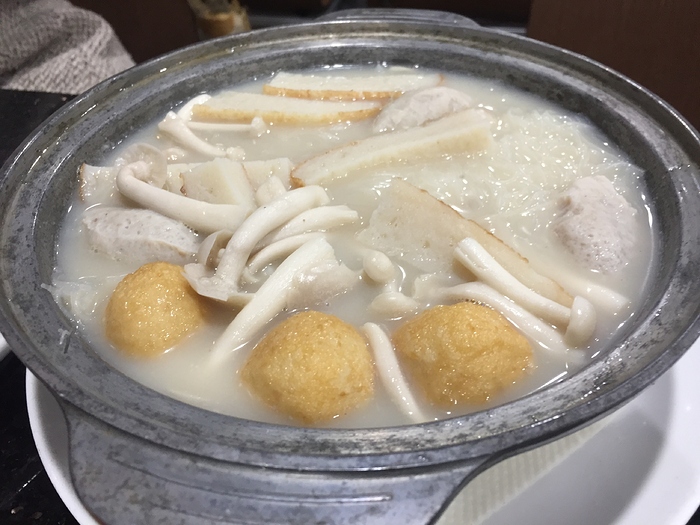 XO sauce rice noodle. Decent. Can dial up the amount of XO sauce substantially since the flavors were pretty mellow. Although that would also mean the price would have to increase as well. 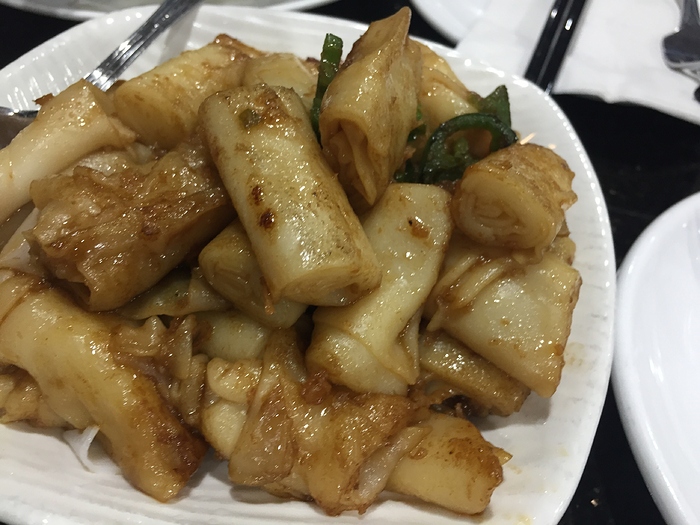 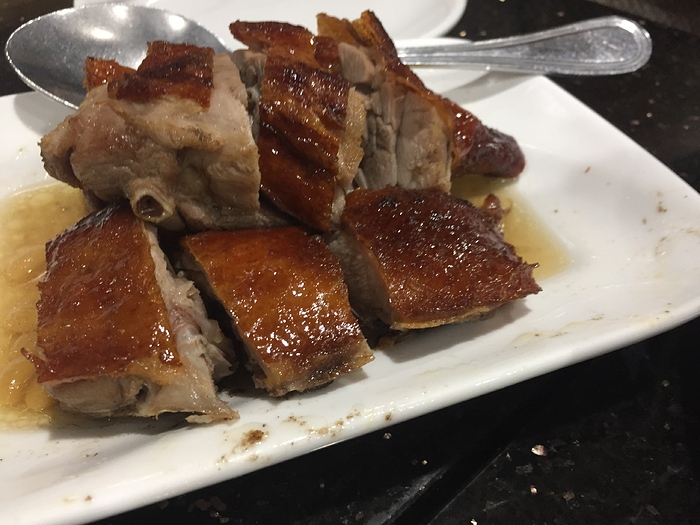 Braised beef brisket- The brisket was way too tough. I am not sure if this particular brisket could be softened by braising them longer. Skip. 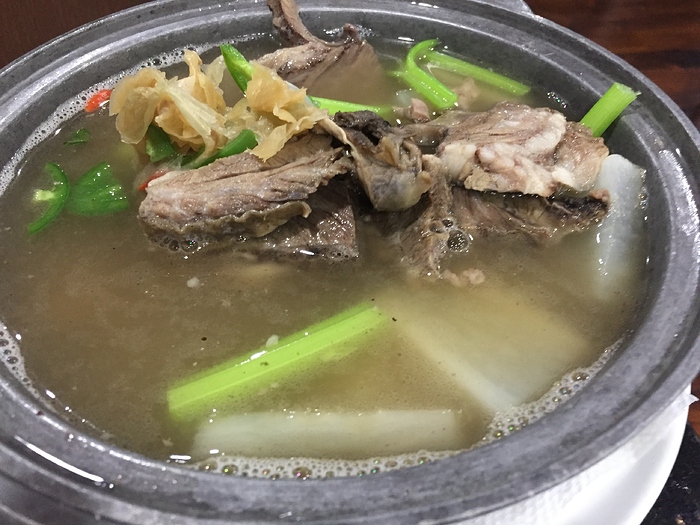 The highlight of the meal. Black sesame dessert. Excellent flavor with just a little bit of sweetness to go with the black sesame that they grind themselves at their production facility. We first got one, then ordered another one when the first one quickly got finished by everyone else but me. Totally different dish, but this sesame dessert reminds me a bit of the spectacular egg white almond dessert at Yum’s when chef Yum was manning the kitchen. 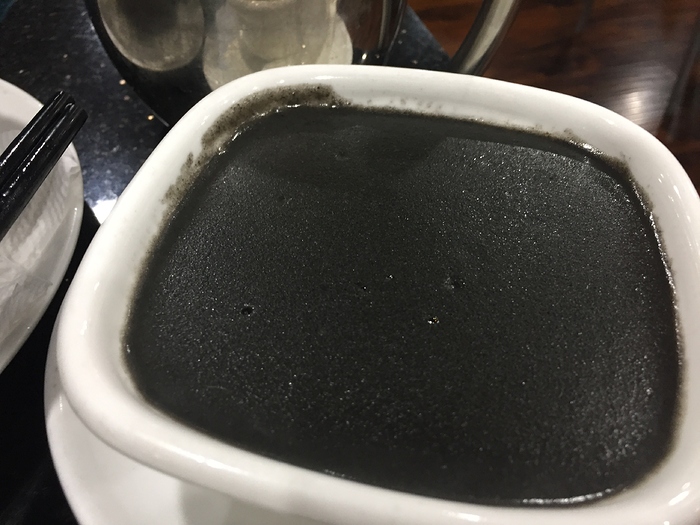 Overall, a pretty affordable meal that had a clean, homey taste. Like what @dihy mentioned, they were pretty restrained with oi. Will come back and try more of the items on the menu to find out what shined. Had my eye on the sauteed/ fried halibut? on the specials menu that I forgot to take a picture of. I will come back again and again for the sesame soup alone. 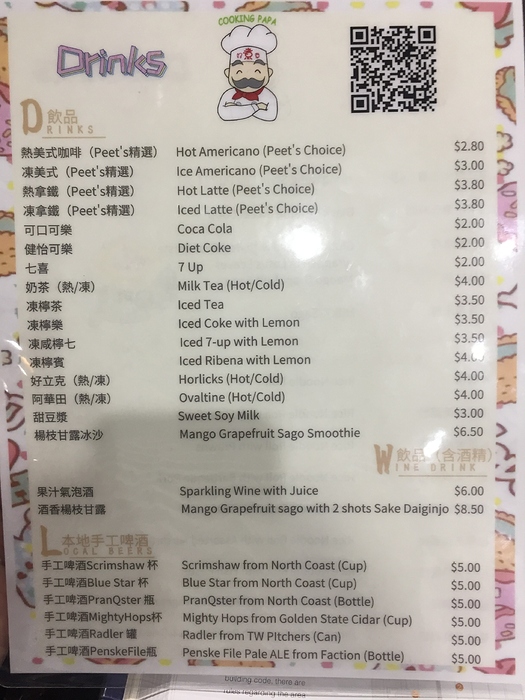 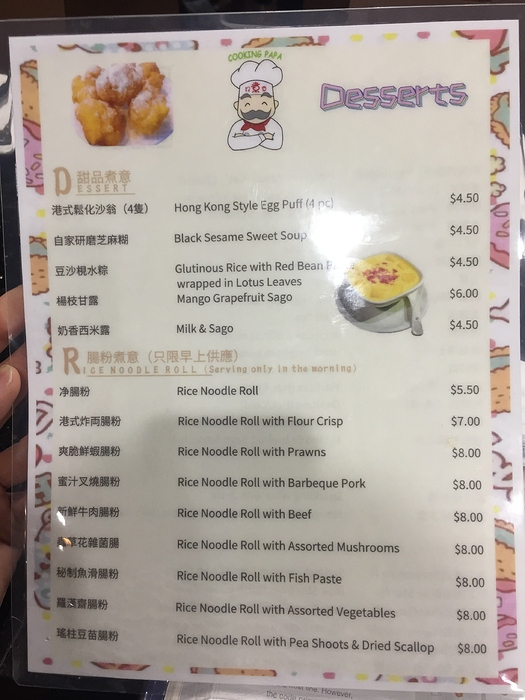 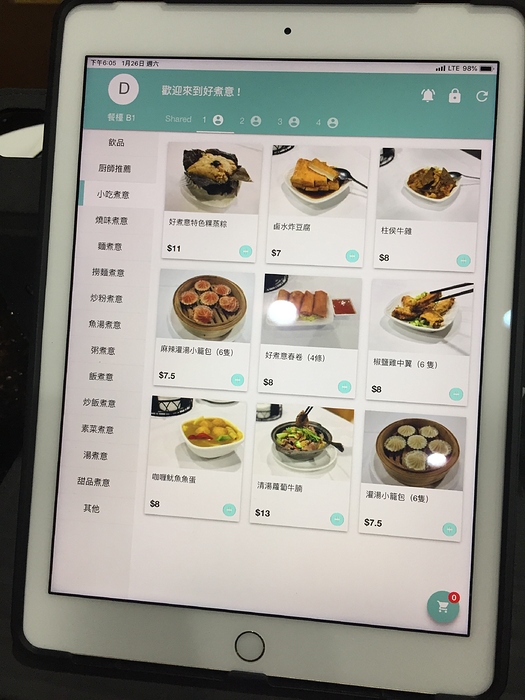 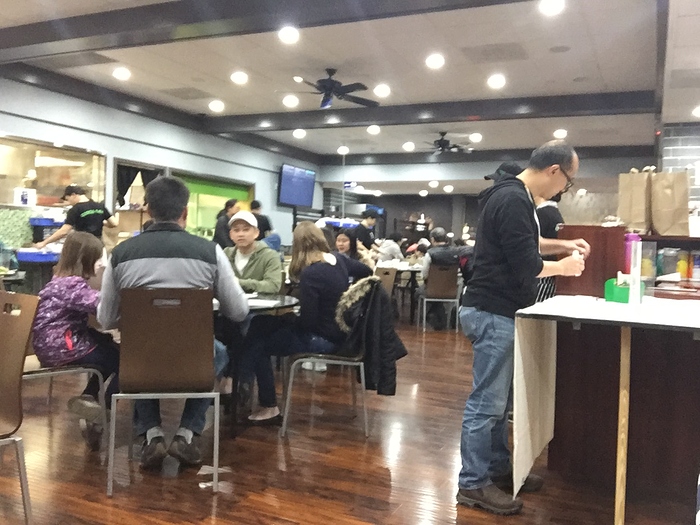 Looks like the Foster City branch has also transitioned over to the new owners/menu. Reviews on Yelp indicate that the quality has gone down and prices have gone up. Also a lot of items are not available on the menu currently. Too bad because it used to be my standard for Cantonese food on the peninsula. Has anyone been to the FC location since it reopened?

I’m torn about this, having frequented CP many times in the past. For the most part, the signature dishes were consistently delicious and cheap. The new menu is expensive and in a bunch of cases, not as good - my thoughts roughly echo what @sck posted above.

I appreciate their move towards using better quality ingredients, but the whole experience of ordering from an iPad (from a condensed menu), speaking in English even when you clearly speak Cantonese, the higher prices and mandatory service charge ruined it for me. After a few visits, we haven’t been back in months.

Are you referring to the MV location or FC?

Just the MV location (which admittedly was the weakest of the three to start). I haven’t been to the FC location since the switchover. Has the SC location also been converted?

Not sure about the SC location, the menu website still points to the old menu so appears it has not. The last time I ate there was maybe 6 months ago and the food quality/execution was significantly lower than the “pre converted” FC location with higher prices. If anything I would expect the conversion to be an improvement for the SC location but not sure if I’m going to risk trying it out. 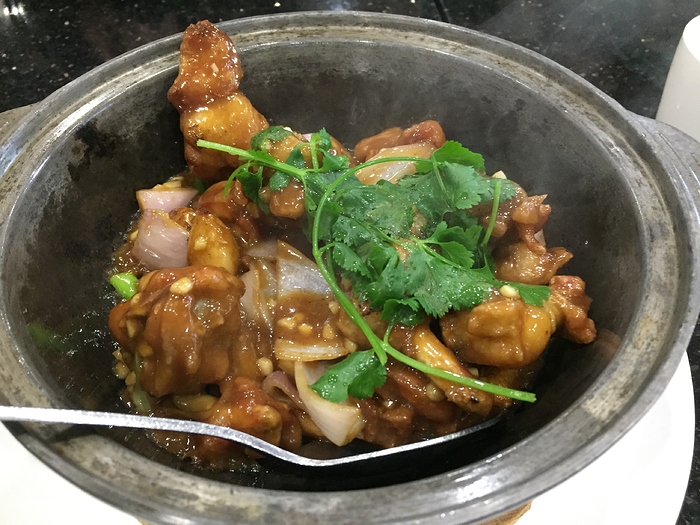 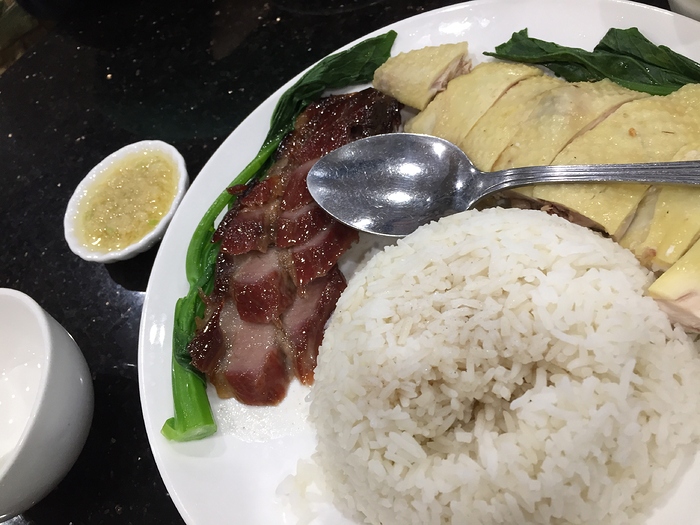 The beef sauteed ho fun was alright. Not enough wok heat. Meat texture also got dinged as a result.

I think the issue with the new Cooking Papa is that their Hong Kong classics that Cooking Papa 1.0 used to prepare quite well, went down a little bit in quality under the new ownership. Some other dishes were pretty nice, like the chicken hot pot, but those weren’t the reason people used to come to Cooking Papa for. That’s not to say Cooking Papa 2.0 is a bad restaurant. Not at all. I think they are setting the wrong expectations when they inherited the brand.

Thanks for the report. I assume this was at the MV location?

New ownership appears to have killed this place (at least in Foster City). It had been one of our favorites in the Bay Area. Today, bbq pork belly was tough and nothing like the traditional quality here, shrimp wontons had small amount of overcooked shrimp, poor wrapping, and a soup that tasted of fish flakes but not a decent stock, and ghastly XLBs with tough doughy wraps and tasteless filling. This is very sad. Service was better than it used to be, but the place was empty not packed at lunch as it used to be. Very very sad.

Poor ingredients. Menu cut by 60%. They now use some kind of tablet for the diner to order. It is confusing and even of the reduced list there, many are “coming soon” like all the rice rolls! Really sad.

Anyone know more about this?