according to the new york times. not included (who knows why):

i copied the link as a gift, so there should be no problem with the paywall.

Thank you for the link

As a fan of the Nero Wolfe novels I’m surprised that his grand feasts were not given at least an honorable mention. Perhaps because they were only dinner for for himself and his staff with enough elaborate food to feed a small army.

Not a party but “The Little Match Girl” . There was this picture…

This isn’t the one I remember but close enough. 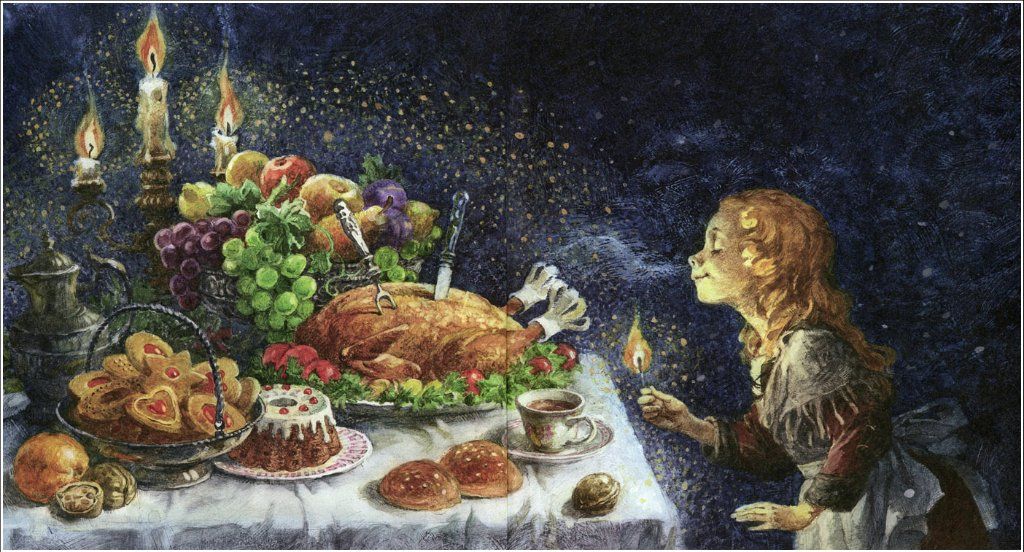 Not only a fictional feast, but an imaginary one too, I think? That story flat freaked me out as a kid, and haunts me to this day. Wondering why these awful stories are foisted upon kids…??

I think i learned the back story here on HO! I didn’t remember what the story was about, but I remembered the picture of the feast.

Well it’s a truly awful story, Wikipedia probably covers it sufficiently - I don’t have the heart to recount it.

Yes! I didn’t even think about until someone brought it up here ( or maybe CH!) , and I looked it up and I was like OMG! How did I miss that part?!?

Right - what an awful Christmas story for kids! Yet another thing to add to the childhood list of ACE’S! At least Bambi was more uplifting than that.

Fairy tales were cautionary stories designed to scare children in an instructive way. Look at The Little Mermaid now there’s a really Grim one. (pun intended) here’s my TLDR version–

Witch talking to Ariel: “Okay Hon, first I’ll cut out your tongue, then I’ll change your tail into legs & feet but you’ll feel like you’re walking on sharp pointy things, & finally the prince will toss you aside for another.”

Yes, but at least a happy ending! Truly, times were hard way back then, suppose parents needed those tales to keep children in line and from running away. Mean stuff, but often with useful themes. But I’ll take Goodnight Moon and the Runaway Bunny any day lol.

I agree, although I would not put The Little Match Girl in that category. It’s not even clear from the histories around Hans Christian Andersen that his tales were seen as particularly “moral”.

Although I’m not one for authorial intent, I read this within the drama of Andersen who definitely seems to have seen himself as tormented outsider. (And understandably as likely bisexual, not very attractive, raised in poverty, etc.) There are some good pieces out there about his drama.

But oy, what a story. Easier to enjoy the imaginary and then realised dinners of Frances Hodgeson Burnett’s Little Princess.

I would not put The Little Match Girl in that category.

Me neither. I was introducing another category, which includes Shockheaded Peter and the like.

That must be the infamous “Der Struwwelpeter,” which both my sister and I read with delight (I guess kids of the 70s/80s weren’t easily shocked). I can still recite a few of those verses

ETA: The antiauthoritarian decade brought a satire of the book with it, the “Anti-Struwwelpeter,” touting the advantages of not listening to one’s elders. I just looked it up on Amazon, and now there’s a “Struwwelpeter - The Reckoning” for adults. I may just have to check that one out

Yes, I saw a theatrical version of it. the same week I saw The Pillowman. They were both pretty gory and violent. So I was a little on edge. And for the record, I am a child of the ‘70s.

“And Then There was None” - the film adaptation of Agatha Christie’s book of the same name (although it continued to have its original, most inappropriate, title here in the UK until the 1980s

I have a very vague recollection of the dinner party scene in Plenty, which I haven’t seen since it came out in 1985. Meryl Streep is the hostess, and the dinner is an absolute disaster - not because of the food, because of the guests. When everyone has finished, she says, “Well, there’s plenty of food left - shall we eat again?” I say this myself sometimes.

I say this myself sometimes.

I’d love to be able to say that. When we’ve hosted family get-togethers, I’ve often thought “Yep, I’m looking forward to the leftovers for lunch tomorrow”. But, nope, some family members will just keep eating till it’s all gone - I think they treat Casa Harters as a challenge, much as they might with an all you can eat buffet.

Are you related to Joey Chestnut?