Well another fujianese place in the shoprite plaza is now open.

It appears they do an ayce special for 28.00

Welcome to MIZU 36 Asian restaurant, all our rolls are made fresh!  Order as many times as you want, as much as you want.

I have yet to go to an AYCE sushi place that I’ve been happy with (rice/sushi ratio is always terrible) but considering the price point here and the fact that they do sashimi… I am going all in.

BTW for what it’s worth this place is run by the same people as Ming Ying, they seem to have their local Asian game down.

I’m pretty sure they own Aji too. Ming puts out some decent food but prices have gone up a lot. I remember paying like 5 and change for a lunch special and now it’s like 8. I guess everything is higher now.

So I’m a little confused. There is very little info on this joint. It appears you order items to prepare with the ayce but I’m not certain. I don’t think there is technically a buffet. I could be wrong but it appears this way after 45 seconds of research lol

If all goes well, I’m hitting this spot with a hard hitting dude from work this Wednesday. He will surely get his 28 bucks worth.

I can’t tell you if the food is good yet but it does look damn enticing!

So I went today. In a nutshell, it’s not worth it unless your goal is to spend a lot of money on a ton of poor quality food.

I’ll start with the highlights:

Udon/Ramen were good, they have a decent tasting commercial tonkotsu style broth. Not up to any real ramen shop standards, but it’s pretty serviceable.

Steak teriyaki is not terrible, and it’s essentially all you can eat steak.

They do not overfill the sushi with rice.

Some of the sushi fish is not bad.

Most of the sushi fish is not good.

The “spicy whatever” mix they use in all forms is pretty bad. I got two rolls that supposedly had king crab and lobster, and not a hint of either could be detected in either. In hindsight ordering these rolls was a huge mistake. Their spicy tuna looked ok but I didn’t have any.

As another example, their spider roll had like, maybe 1/3 of the normal amount of soft shell crab that this roll should feature. I’ve even gotten spider rolls at 1/2 price sushi places and it was never as poorly done at is was here.

Finally, the service is atrocious. Your food will take forever to arrive, and no one checks up on you. Our glasses were perpetually empty.

Damn lol. So don’t even go try some other stuff to test things out? I am supposed to go Wednesday but I guess I will pass if you’re saying it’s not even worth trying out

I was hoping this spot would be at least passable

Well the main issue is that their fish is second rate. Most of the fish they had, I had no desire to continue consuming. They also way overpad their “spicy x” items with breadcrumbs (for example, the “spicy scallop sashimi” was 80% breadcrumb.

The best things I had there were the steak and udon, and they were firmly buffet quality.

Shit…I guess I will bail and hit some rodeio grill instead. Maybe it will get better soon but I doubt it

Dude I’m almost anxious to see how much this places sucks. I wrote it off but now I’m kind of intrigued lol. How does it work? Is there a list you can choose from ayce? The pics I see online look interesting so I it’s hard to imagine it’s that bad. Then again, I know you know good food. Maybe they serve up legit stuff then just half ass it if you get ayce.

If you had to attack this place a second time around, what would you do differently or try? Are there any decent crab dishes at all?

Sometimes these spots will actually do some “custom” stuff if you ask the server. It’s usually hard with the language barrier but you can sometimes be like “hey can you please have the cook fry me up a plate of tempura shrimp…nothing else done. Just fry the shrimp” …and you will get a plate of fresh hot shrimp. Normally this isn’t the case but if you chuck the server some cash things can happen. A “pre-check” ten spot goes a long way to have someone make you feel comfortable.

You can get all the hot shrimp you want, there’s an AYCE menu (you can see it on their website or yelp) that has all the selections you can get. Unfortunately I never got the shrimp I ordered on this visit but had a few rolls with shrimp tempura in it.

Don’t get me wrong, it’s not really the food that sucks, but the price (and the service/wait). For most AYCE sushi places the problem has always been that they add way too much rice to their sushi. Here the problem was different - the quality of the fish was just lacking. The main reason for the disappointment was that I paid extra for the dinner menu just for the sashimi options, and the sashimi really wasn’t that great.

I enjoy cheap, lower quality sushi under the right circumstances, for instance from places like Sultan Wok or the half price places in Freehold. But large amounts of low quality sushi is not something I want to pay 30 bucks for. You can go to Fusha or Oyako Tso in Freehold and pretty much get all the sushi you can eat for about 20 bucks anyway. Or for 30 bucks you can get pretty full just eating normal sushi too.

On the flipside, thinking about it more, the lunch is a great deal if you have some time to get your money’s worth. I would stick with rolls, steak/salmon teriyaki, shrimp tempura and ramen/udon. Oh and the eel sushi was just fine, so I’d probably stick with that in terms of nigiri. I would happily pay 16 bucks for all that, and it would make for a nice weekend lunch/brunch I think.

Thanks for the reply. I think I have to give this a go. Do you perhaps have a link to the ayce menu? I could be missing it but I swear it isn’t on the one I see. I’m on my phone so maybe I’m getting some android menu and I’m not seeing everything.

Did they have any beef negimaki on ayce?

I don’t think they have beef negimaki. You can see the menus in the yelp pictures. https://www.yelp.com/biz/mizu-36-asian-cuisine-west-long-branch-2

Ah now I finally see it. Thanks.

Hmmm…they have fried chicken wings on the lunch menu but I don’t see them on the dinner menu. Hell I think I could eat 16 dollars worth of wings alone lol

Yep, white tuna is escolar. Quality was a bit lacking.

Is it real escolar? That stuff is white as can be. It’s tasty too. True albacore is not white like that at all and probably 90% of white tuna out there isn’t albacore.

Escolar is pretty unique. I don’t think there is a “fake” escolar considering people rant and rave about getting sick over it

I don’t know what real or fake escolar is… it’s just my understanding that the “white tuna” they have at sushi places is escolar. It’s the bright white fish with the kinda creamy/mushy texture. Basically the same thing I’ve had at every other local sushi place, just not quite as good as usual.

My mistake. I wouldnt say fake escolar, rather crappier white fish they try to pass off as “white tuna” like bergall or some other stuff. Escolar is actually decent.

So I had to try this spot and it actually exceeded my expectations. For a 16.99 lunch it’s actually a decent deal if you can put some food away. It’s about value. If you are a person who will eat a single roll for lunch and be content, this isn’t the place for you. As noted, this isn’t a buffet. You order all you want off a menu, as previously mentioned by joon, and you just pig out. You dont have to order evrything at once and they make it fresh to order. If you’re a slob like me, read on lol

Thai cucumber salad was actually very good. In fact, that was probably one of the best things I had and I am not a salad guy really. I then had a few chicken wings which were nothing special. I think I would just ask them to fry me some up and leave off the “BBQ style” sauce next time…maybe put a side of sauce on the plate.

I then set off to dominate 3 special rolls (top three on the menu going across) and a spicy tuna roll. The spicy tuna was just OK but the one with the jalapeños was pretty tasty.

The shrimp tempura were tasty and eel was decent.

My cousin and I were greeted by the manager and instantly seated. In fact, he took our drink orders. He came around three times to make sure everything was going well. Our server was on point too. Granted it wasn’t that busy, but hopefully they have their service issues fixed. My cousin had some ice water in a minute and they brought him out a plate of lemon wedges after he asked for lemon. With the crazy prices of lemons today, I was surprised to see this.

Overall this is a decent spot if you want to freaking gorge on mediocre/decent food. The decor is actually quite nice, it’s clean, the bathrooms are spotless and brand new, and the tables are spacious and comfortable.

I never got to try the udon, or any soups, and I never got into any terriyaki or other tempura. I’d like to try some other things on the menu, including some lomein. Overall I was surprised. @joonjoon the rice ratio wasn’t off today. It appears this place is actually trying to put out legit food. I think they can probably put more care into prep while it’s lunch time. 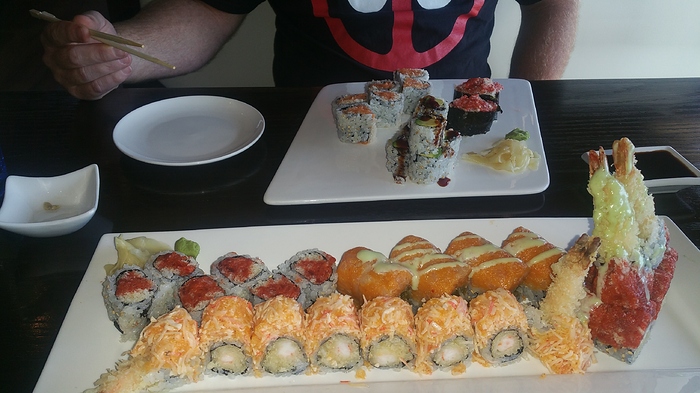 On the downside, they are really light on the wasabi and ginger. I’m sure you can easily ask for more though. I just ate my cousins ginger.

Looks great, glad you enjoyed it! Yeah as I noted in my review the best thing about this place is that they do not overpad their rice like all the other AYCE places do. The lunch deal is pretty good if you can eat. I plan on going back for a weekend brunch one of these days. You can absolutely get your money’s worth with steak and shrimp and some sushi pieces.