Ming Yuan use to be King Wah just a few months ago. In any case, I was tempted to see if anything changed and see how the restaurant was overall. I actually ate the dinner first and then dim sum a few weeks later but opted to post in a lunch then dinner format. 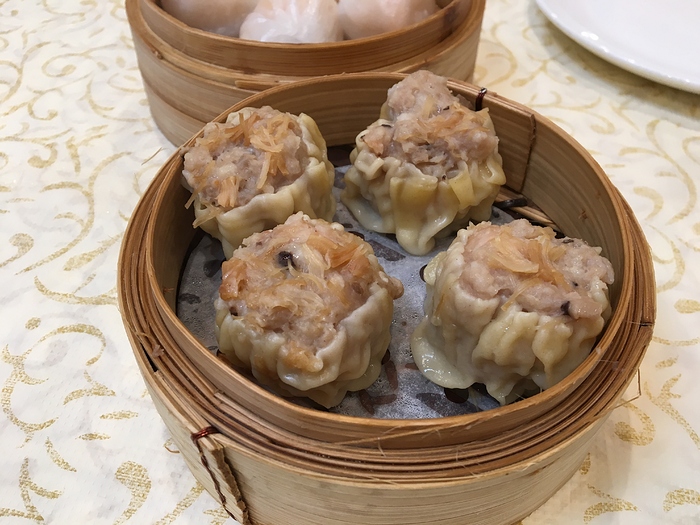 Started off lunch with the scallop siu mai (well more like conpoy siu mai). I was seeing if they were like the fresh scallop siu mai at Dragon Beaux but I can’t quite do a comparison since they’re well… dried. In any case, wasn’t a big fan of this variant, probably should have opted for the regular. I noticed that the meat was very compact so probably not made/steamed that often. 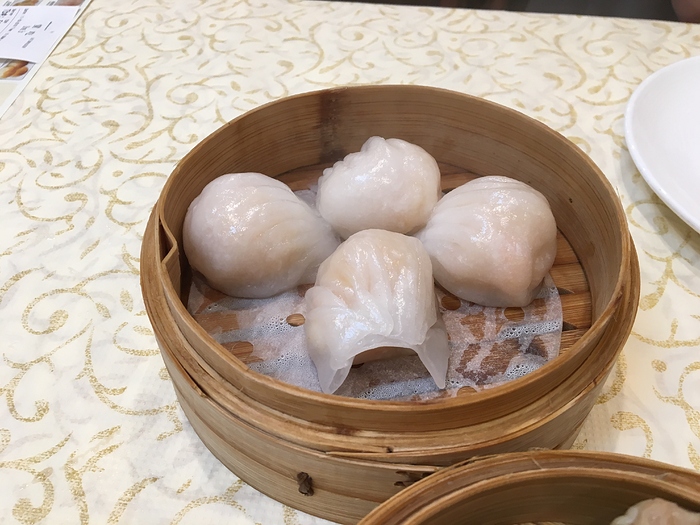 Next was the shrimp dumplings. I’m not sure if you can easily see the pleating on the dumpling, but the dumpling closest to the camera isn’t quite sealed. Quite disappointing as the har gao wasn’t really that juicy. Next up were some beef balls steamed over some yuba skin. Worcestershire sauce came on a separate dish but we opted to just pour it on top. The beef balls were quite nice, with a good bounce when eaten. 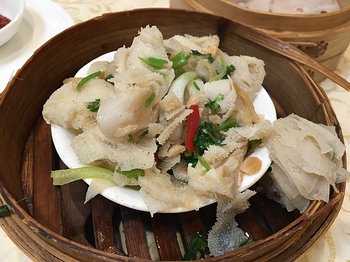 Next up was the beef tripe (feel free to ignore the trip going overboard…) and that was pretty good as well. The tripe had a good chewy texture with a crunch. 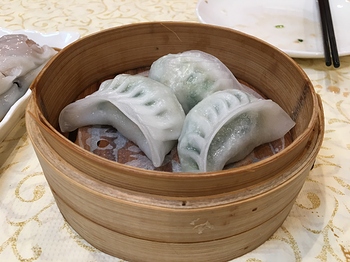 Next up was the steamed pea leaf dumplings with crab. The wrappers seemed a little under-steamed but the dumplings were just fine with a very hot and juicy interior with flecks of crab meat. 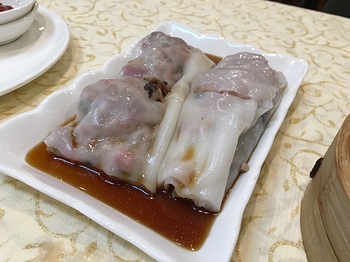 We got the 4 combo steamed rice noodle rolls with char siu, beef, shrimp and a veggie/mushroom roll. The rice noodles were smooth and didn’t really meld to each other. I still prefer the shrimp as my main roll, but all the other ingredients were good. After that we tried the steamed fish ball with watercress. I actually liked this fish ball where there was a nice textural consistency with a bounce. 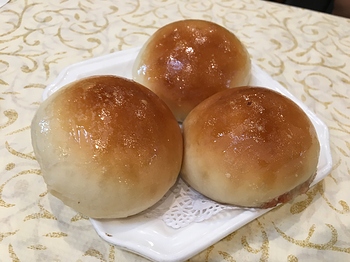 Opting for the baked bbq pork buns rather than the steamed, the buns were nice and hot with a more saucy interior. The char siu had a good meat/fat distribution without gristle. 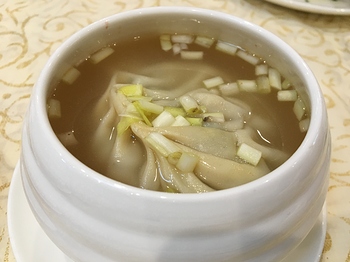 This is the dumpling in soup with dry scallops; probably one of my favorite dim sum items. The soup was a good superior stock with the golden chives adding a little extra sweetness. The dumpling to soup ratio was good (I always tend to favor more soup though…) and the meat inside the dumpling separated easily. The XO pan fried turnips were good though I do like the variants with bean sprouts on the bottom. The turnip cake could also be sliced just a little smaller for an easier bite. We got a round of the deep fried meat dumplings as well. Nice and hot with a good crispy exterior but chewy interior. 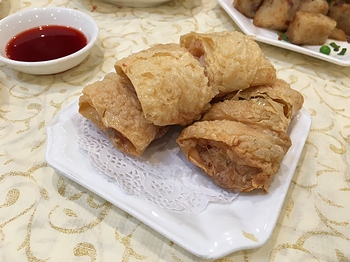 The last savory item was the dry bean curd roll with shrimp. A nice crispy yuba skin with hot shrimp in the middle, excellent. 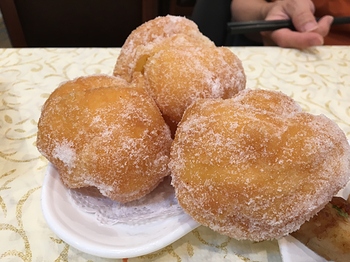 As for dessert we saw a few sai yong/egg sugar puffs carried by servers and gave those a shot. I thought these would be warm and crispy with a nice doughy interior. Sadly they were cold like the doughnuts were refrigerated and then sprinkled with sugar.

Overall some hit or misses in the dim sum area. The more common ones seem to be a miss but everything else was pretty good. I’ll say you can’t quite make any judgment when everything isn’t running on full cylinders.

Anywho, on wards to dinner! 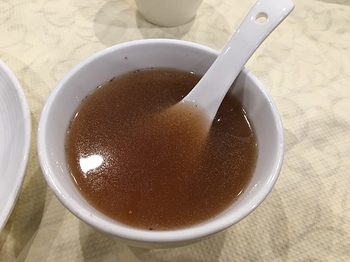 Started off with some lotus root soup. Served hot with good savory notes, great on cold nights in the Westlake area. 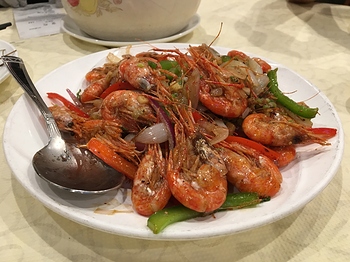 They had some ridgeback shrimp in the tank so we opted to get a pound of these sweet shrimp. Our server suggested the tri pepper (or more) cooking style and it was pretty good. The peppers had a great heat (but not too spicy)! I do wish the sauce/seasoning was a little more dry though. 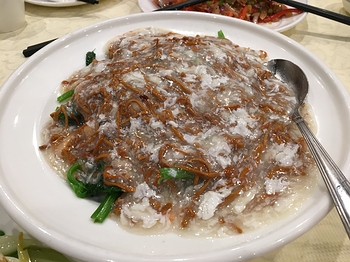 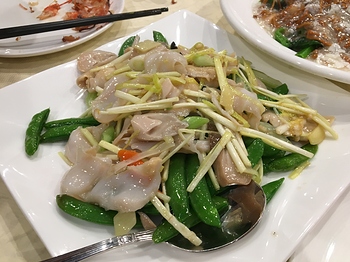 Per the server, they had some geoduck in the tanks so we decided to try their stir fry version. The geoduck was cooked quite well, with a nice crunch and chew. 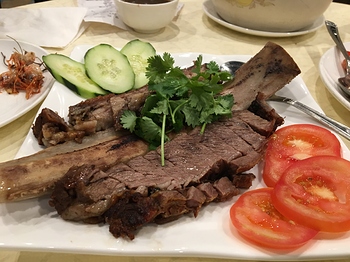 Following that, we got the chef special beef ribs. These were actually quite nice as well, they remind me of the beef ribs at Grand Palace (actually a few servers seem to be from there). They were tender though cooked to a more well done temp than what you would normally expect from a beef rib. 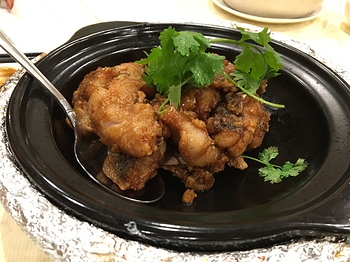 And this last dish should be the boney fish baked soy sauce. Nice crisp exterior, flakey interior. I do wish the portions were larger though.l 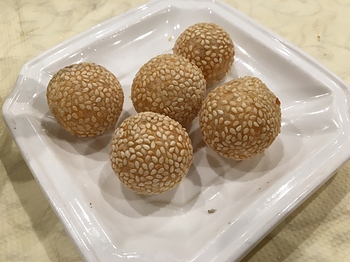 For dessert we got some sesame balls. But… they were on the cold side and a little hard. 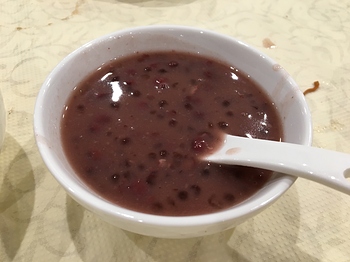 We also got a dessert soup of red bean with sago. Reasonably hot and not too sweet though I’m honestly not the biggest dessert soup fan so take that with a grain of salt.

I think I enjoyed dinner quite a lot as well but there were a few hiccups in service since we came roughly 2/3 weeks since it opened. Still working out the kinks.

Hope to see how Ming Yuan will be in a few months.

And this last dish should be the boney fish baked soy sauce. Nice crisp exterior, flakey interior. I do wish the portions were larger though.l

Thanks for the report. Do you know what fish they used in this dish?

Thanks for the report. Do you know what fish they used in this dish?

so… I forgot haha. I think it was a rock cod fish… 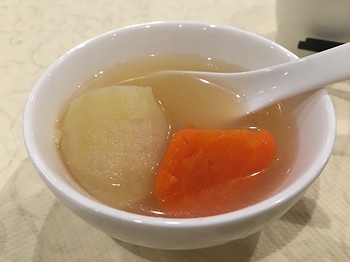 Started off with their slow boiled soup which was chayote and carrot soup. Nice and warm with large chunks of veggies. 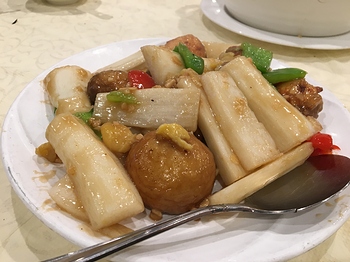 Next up we had some stir fried fresh Chinese yam with stuffed mushrooms. Seemed like a weird amalgam of the dim sum dish with Chinese yams. It was okay. 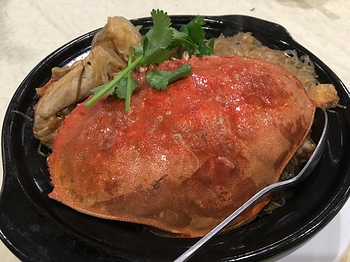 For the crab dish, we tried the black pepper crab with vermicelli. Mmmmmm I probably would try the other crab cooking options next time. The cracked shells of the crab kinda went all over the vermicelli and it was annoying in well trying to get a random bit of shell with the noodles. Flavor wise it was quite nice, sweet crab with some peppery notes! 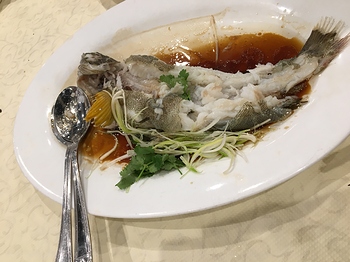 I probably should have taken a picture before they uh… split the fish , but steamed mouse grouper was another main entree. I thought they did a good job here. 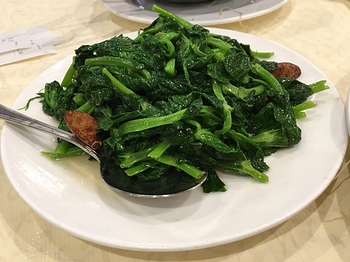 Rounding out our meal with veggies, we got some stir fried whole garlic with pea sprouts.

Overall, I enjoyed the dinner though would probably change a few things up. I really don’t know if they actually changed the chef at Ming Yuan when they switched over from King Wah…