@Night07 its your stomping ground. Hee Kee the typhoon shelter crab joint from Hong Kong has opened up a franchised branch in Millbrae, as reported by Hyperbowler here.

From their facebook page a few days ago- the mantis shrimps are live:

I don’t think I’ve ever been to Hee Kee in Hong Kong. Its said their head chef is here for the opening. 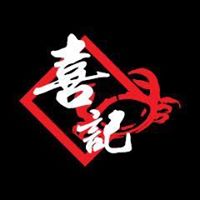 I don’t think I’ve ever been to Hee Kee in Hong Kong.

I think I had been to 避風塘炒蟹, not sure if it was Hee Kee or others. There are several in Wanchai.

Wow they are in US now?!

Huh, I’ve never actually tried Hee Kee in Hong Kong, but I’m more than willing to check this place out. Though not sure if I should do an early attempt and possibly catch the head chef (and suffer the lines) or wait a few months and see how people rate it (though most negative reviews seem to be more on the political side than food tastes

They replaced the all you can eat hot pot place (which use to be the … South China Seas restaurant I think).

I guess all that anti-democracy sentiments against Hee Kee comes from the anti-Occupy protest by the owner and the subsequent arrest. 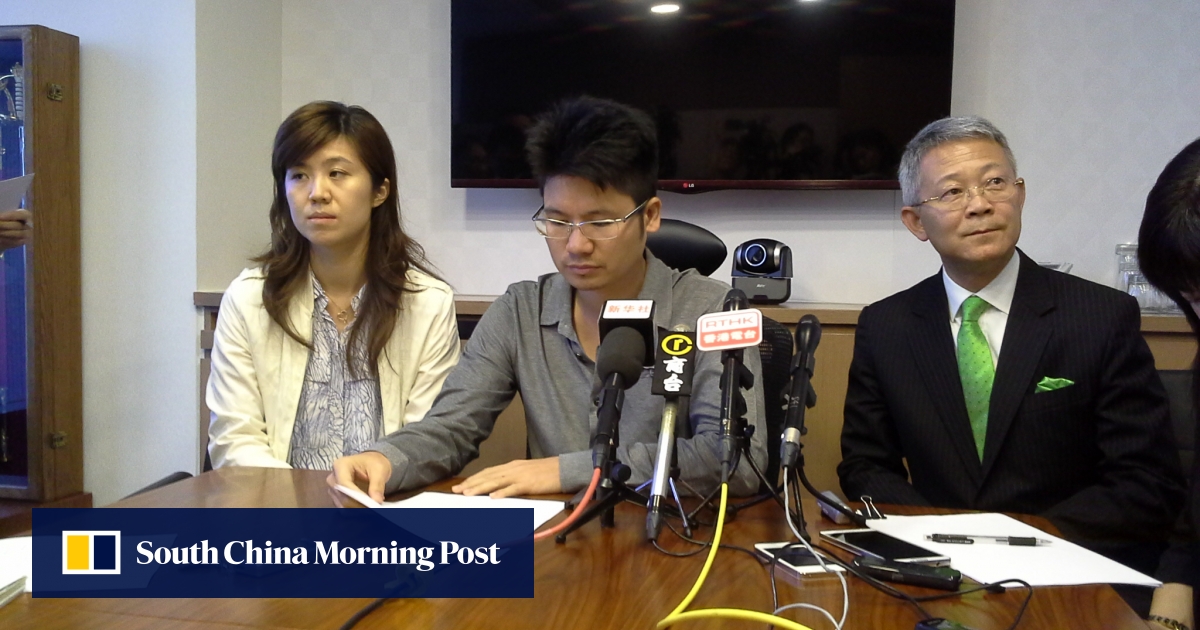 Reading the news articles about the owner is more interesting than the crabs.

Their Millbrae Yelp entry stresses that 'We are Hong Kong Hee Kee’s Franchise store. Our company is base in U.S., all owners, management and operation is independent. ’

If they try so hard to distance themselves from the HK store, why do they even franchise to begin with and use the Hee Kee name?

Ambrose the owner used to work at Hot Pot Garden. He has contacts with seafood importers, but I assume he doesn’t have the cooking skills to go with the seafood. Hee Kee actually sent someone from Hong Kong to train tyr chefs at the Millbrae location. The food is excellent, but most importantly, they don’t gouge! I spent $50 total (free corkage) with 7 others for so much live seafood, with the crabs from Vietnam and sea snails from Japan. 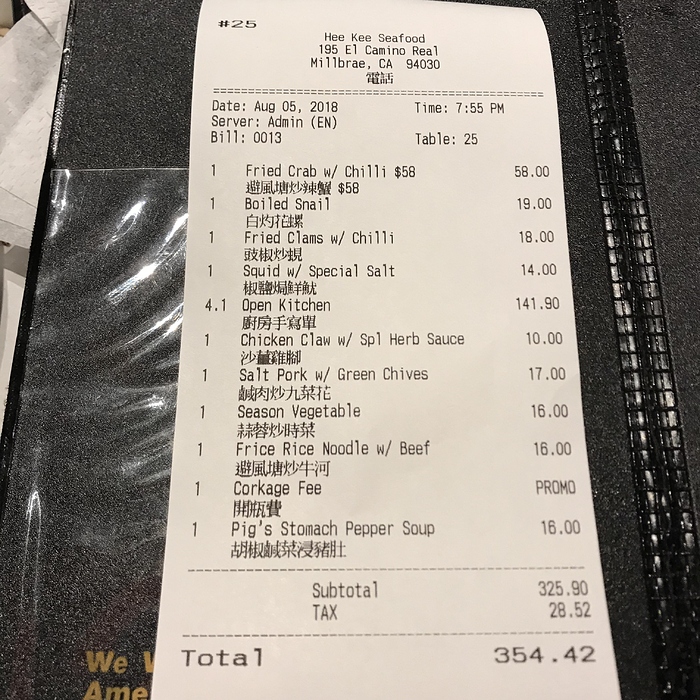 Excellent. Thanks for the report.

And I see that they have pig’s stomach pepper soup. Do they have more Chiu Chow items on the menu? 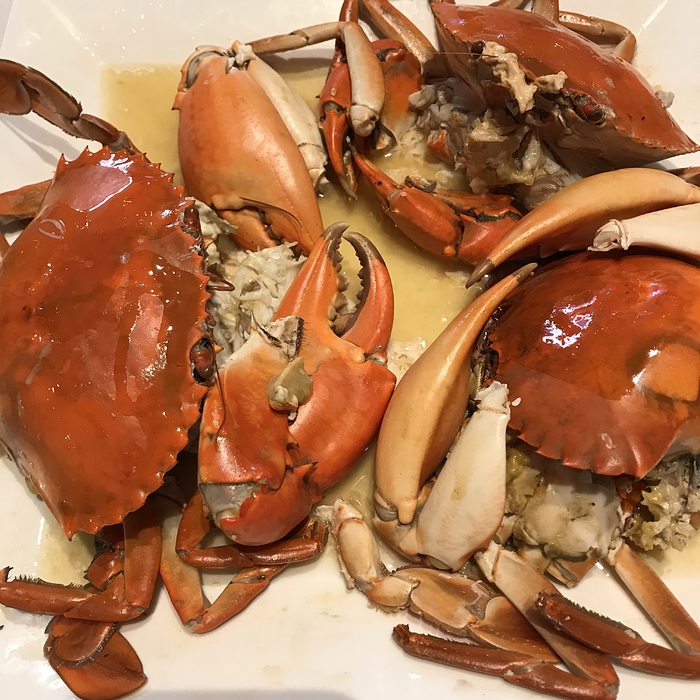 B7359987-72A9-416B-87BB-EF7761C39405.jpeg3024×3024 2.04 MB
There are few Chiuchow items there; it’s primarily a live seafood restaurant focusing on crab. The pig stomach fish isn’t really a “soup” as it’s more like a dish bathed in some broth. But $16 is a truly great value for something meant for 3-4 people. There were 8 of us, and so it was more like a small tasting of every dish. That pig stomach was suprisingly tender! They have a Facebook page where they list the prices of their special live seafood. The $$$ item was the three Vietnamese crabs. The flesh was sweeter than your typical Dungeness. And unlike Dungeness, we had one or two female ones, which meant bright-red crab roe/orange. They sell them for $39/lb., very reasonable since I spent $20/lb. retail in Oakland Chinatown a few months ago.
1 Like
Night07 August 8, 2018, 2:36pm #9

Ambrose the owner used to work at Hot Pot Garden. He has contacts with seafood importers, but I assume he doesn’t have the cooking skills to go with the seafood. Hee Kee actually sent someone from Hong Kong to train tyr chefs at the Millbrae location.

Ah that makes sense in how he gets certain seafood items. Its always a surprise to see live mantis shrimp in the bay area.

The pig stomach fish isn’t really a “soup” as it’s more like a dish bathed in some broth.

That’s a shame. I thought it would be a large bowl of it; I can’t recall where in the bay I had this soup but it came out in a giant tureen. Quite peppery but soothing in the cold.

I went recently, but did they have any fish when you were there? I didn’t see any in the tanks, just the dungeness crab and boston lobsters.

Anywho, I did go to the restaurant last Saturday. Excuse the pictures because I sat in the sunny area (so weird lighting). For our first time there, we just kinda stuck to whatever everyone else was ordering or suggested by the server. 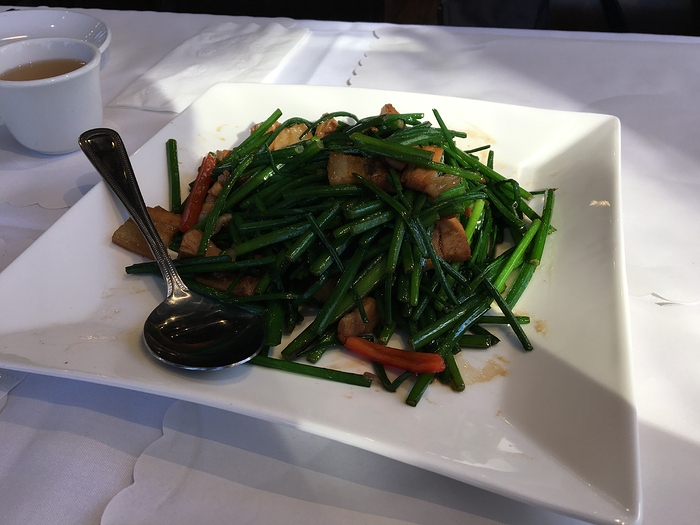 The first dish was salt pork with green chives. I enjoyed this preparation quite a lot actually. The chives had a nice crisp texture and the thinly sliced salted pork works well since each piece was well… salty but not overwhelming due to the portion. 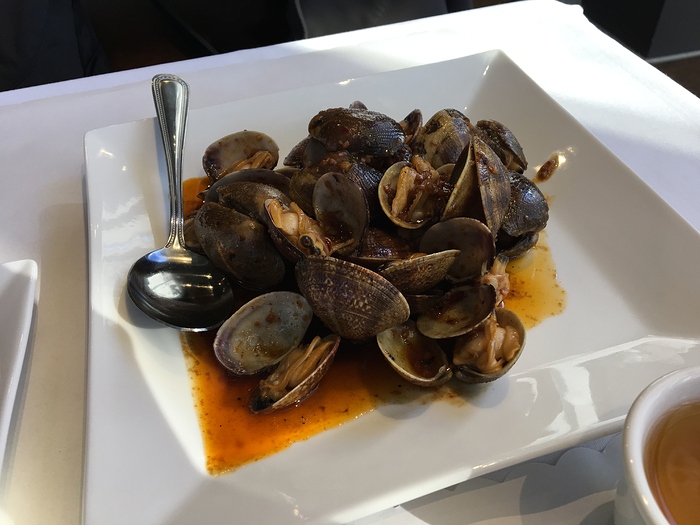 Next up we got the fried clams with chili. Quite good as the clams were larger and had no grit. The spicy sauce was quite nice, a little different from your traditional black bean sauce. 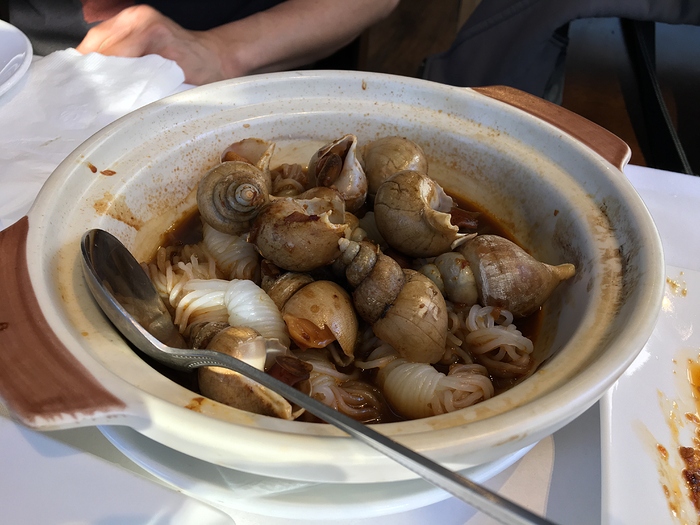 As Vlo mentioned about the Japanese sea whelks, we had them available for dinner time with some shirataki noodles. They described cooking it with some some rice wine and there was certainly a hint of that. The spiciness of the dish was similar to that of the fried clams actually. 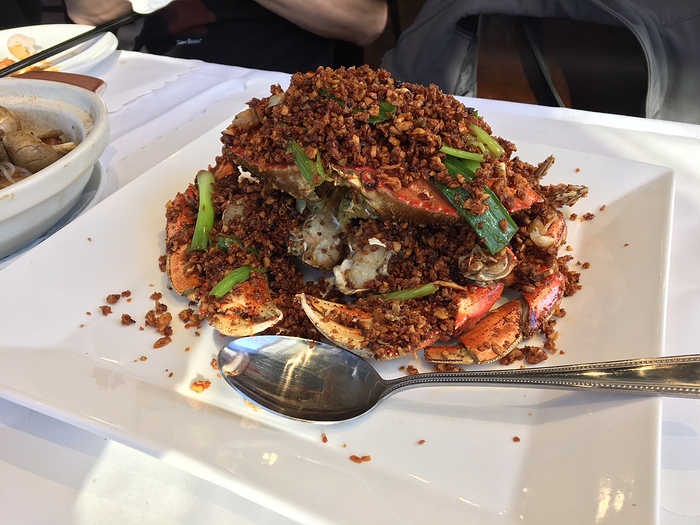 For their signature dish, we got their typhoon shelter crab (or uh fried spicy crab) at the low end of the heat index. The crab is nicely plated with copious amounts of fried garlic and onions, the dish was definitely fragrant. I personally thought the dungeness crab wasn’t too sweet at this time of the year (I’m thinking later during actual crab season would be best), but the method of cooking was quite good! Note, it was usually priced at 58 dollars but we got a smaller crab for 48. 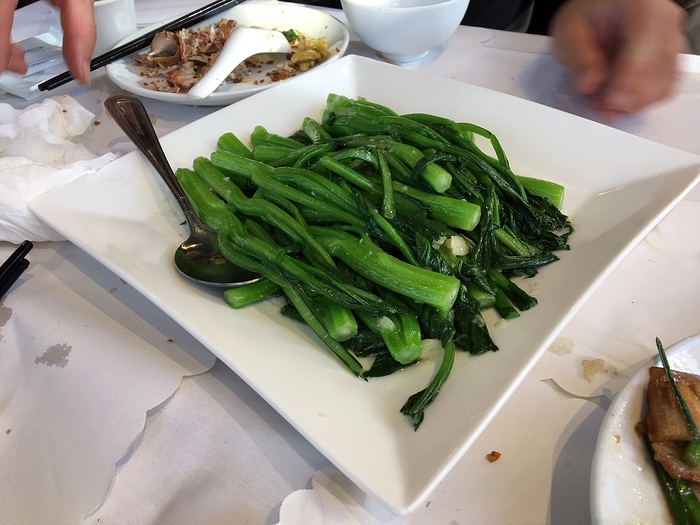 The only disappointment I’d say for our meal was our stir fried veggies with garlic. They looked a little on the limp side, I presume they might have did a quick blanch before they stir fried it. Taste wise, I was fine with it, just felt like it was overcooked a little. We actually got bok choy for our first plate rather than choy sum, but another server quickly rectified that (on that day we had two servers that mostly spoke English, so I am not too sure if the miscommunication was from the kitchen end or the server end). 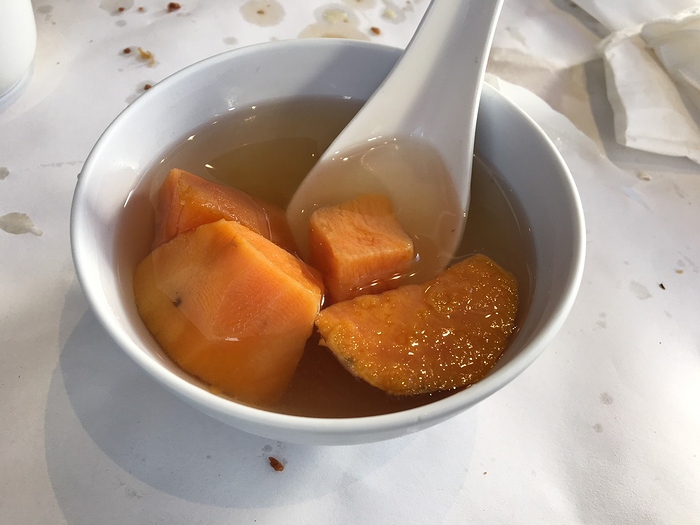 Ending our meal, we received a sweet potato dessert soup. I am not a huge dessert soup person so wasn’t too fond of it. I wished the soup was served at a higher temperature as it was luke warm when we got it.

On the carb end, we got two congees and a bowl of rice. The congee had a creamy texture, but like our dessert soup, I wish it was much hotter.

Overall, the bill was quite respectable (around 130 before tips). I asked about the mantis shrimp and they didn’t have any this time around. I’ll definitely come back and try out some other things. In some ways, this seafood restaurant reminded me of those cooked food centers right above the seafood market.

I think we got almost the same dishes, which are certainly their most popular. We did get A-choy instead of choy sum. The Japanese sea snails were excellent but too small (compare them in size to the toothpicks). I think we got almost the same dishes, which are certainly their most popular. We did get A-choy instead of choy sum. The Japanese sea snails were excellent but too small (compare them in size to the toothpicks).

You got a few more dishes (well you also had five more people… lol) than we did. I though the sea snails were pretty tasty but yes, definitely smaller. I did like these smaller ones than the gigantic periwinkles I ate in Australia. Took forever to get the meat of the periwinkles and the lower end of their digestive tract was an unappetizing dark green entrail like well… bleh haha.

Btw, do you know when they get their seafood shipments? I’m not certain how often they update their facebook announcements. I’d like to get some mantis shrimp sometime (I … think its cheaper than flying to HK… lol)

I think I would ask Ambrose on the phone before I go, and if it’s a big group, it never hurts to ask if one can make specific requests of seafood. So far their mantis shrimps have been really small. At almost $60, they are almost not worth the price tag. I forgot to mention they are also very popular with their chicken feet appetizer, served warm and white (i.e., not brown), very tender and flavorful, not tart in preparation. I also noticed everyone was Chinese and in groups. If I go there by myself, I would order the chicken feet and chive flower appetizers, a single Vietnamese crab, Japanese sea snails, and mantis shrimps or clams or whelks.

@vlo It seems like you have a better idea what’s going on there. Any info? 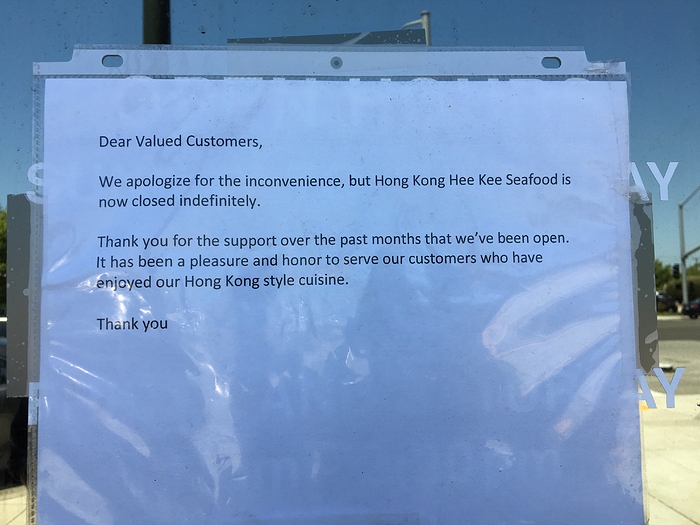 There was a disagreement among the shareholders. It was so unfortunate to lose two of my top favorite restaurants in Millbrae earlier this year: Hong Kong Hee Kee Seafood and Shaolin Pot. Hee Kee will be succeeded by a Vietnamese eatery offering carbs as well.

I’m sad to hear about that. Thought it might be a rent issue or something like that.

Hee Kee will be succeeded by a Vietnamese eatery offering carbs as well. 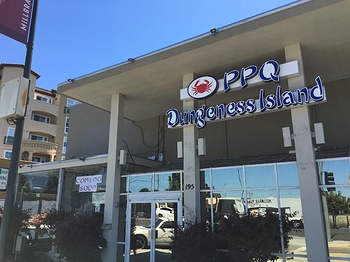 I guess PPQ saw the demand for crab in that area.