Just watched this on YouTube… they look and (more importantly) “sound” incredible. LSNED I didn’t look at the link but that’s old news. I have done this many times. I peel potatoes and then use a mandolin to slice and drop into salted water to remove excess starch and lightly season. I then lay them on a plate and microwave until brown and crisp. Takes time as you have to lay the potatoes in a single layer. Crisp and grease free. I use these when I make tartare.

Thanks, this looks interesting - bet they’d be a lot like the “kettle” style chips. I wonder how much the starch would affect the outcome if one decided to forego all the rinsing.

I’ve seen this guy’s videos before and they’re informative and he’s got a good sense of humor (“which is dumb… which rhymes with losing part of your thumb” and “not just because that plate slowly spinning around is very hypnotic, and therapeutic, and relaxing”).

I think I’ll give it a try, even though it’s kind of labor intensive and I don’t like the notion of having to do 5 rounds to get 50 chips. But it looks like he’s using a 10-inch plate. I think I’d just put the parchment directly on my glass turntable, which is 16 inches and would have about 2.5 times the surface area - maybe I could do 20-25 per go. A bit of Lawry’s seasoning put on at the start might be nice, too. Or garlic salt or whatever.

Even though I like Chef John’s content and have used several of his recipes (he’s got his own page at All Recipes) I don’t watch many of his videos because his manner of speaking (verbal sine-waves, if you will) is something I have trouble listening to.

Not if one hasn’t seen it before, you nattering nabob of negativism.

I think I’ll give it a try, even though it’s kind of labor intensive

Lemmeno how it comes out. I don’t have a mandolin, but if they’re great I may buy one.

Labor intensive indeed, but I don’t eat a lot of them (rarely finish a bag before they’re too stale to eat), so wouldn’t mind doing single servings if they’re really good.

Will do. Hopefully this weekend with some burgers or brats.

I don’t have a mandolin, but if they’re great I may buy one.

I hand-sliced stuff for years, even bunches of taters for gratins, thinking “I don’t need no stinking mandolin”. Or would sometimes use the Cuisinart slicer attachment, but that doesn’t do a great job and I hate cleaning the thing.

Then my MIL got me a mandolin for Christmas that was such a piece of junk that it solidified my thinking. She doesn’t read reviews; in her mind for most products, she’s convinced “they’re all the same anyway” so why not get the lower priced version.

The next year my daughter (who does read reviews) asked for a specific one for her birthday that was about 2X more costly than the one I’d thrown away. Somehow my wife and her mom got wires crossed and each thought they were supposed to get it, so we ended up with two of them and I got to keep the extra.

World of difference a few more bucks makes. Unless the veggie slicing job to hand is relatively small, I pull out the mandolin. I went from denier to believer in the space of 2 mandolins.

Not if one hasn’t seen it before, you nattering nabob of negativism.

Neil Armstrong is the first man to step onto the moon

The Berlin Wall has fallen

A so so real estate developer but entertainer extraordinaire becomes president.

Discovery that you can make potato chip in a microwave

Did I miss anything? Hopefully all caught up now.

Nabob is my middle name

Yep, works with other vegetables too (zucchini is a good one).

Works so well that they made a silicone doodad for it. (If you use a plate, it gets VERY hot in the time it takes to get to a chip). There’s this one too.

I used to make a Greek yogurt dipping sauce to go with the chips, otherwise they disappear too fast for the amount of time it has taken to make them. Plus, protein.

we routinely make hot nuts from raw in the microwave super easy and good.

May I ask which mandolin this is?

It’s this brand, Müeller. The one I linked looks the same as mine but they’re not using the exact same name - mine says “Müeller V-Pro Slicer”. Maybe they’ve done away with that “V-Pro” branding or it’s just not being used on Amazon. You can surely pay more, but this one is fine as far as I’m concerned.

By the way, here’s a fun 5-star review from a happy user that harkens back to Chef John’s joke. There are at least 30 other 5-star reviews with similar photos (some bloody). The moral of the story is, don’t be like Chef John - use the safety guard, even if it means you can’t get down to that last final bit of potato. 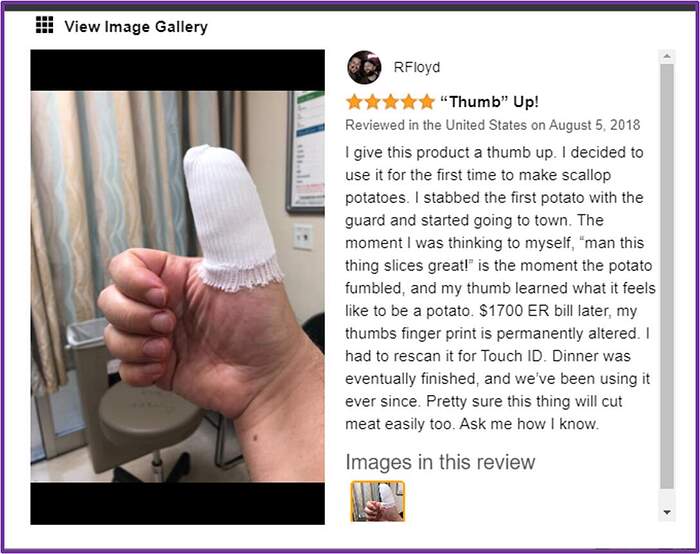 Ok… so what was the one you trashed?

Whenever I use my mandoline slicer, I always put on a cut-resistant glove. I’ve never slipped but I know if I don’t put it on, that will be the day that I’ll end up like the guy in the picture.

Hi Scott - I seriously have no idea now, several years later. Something from WallyWorld or BB&B or equivalent. I do recall looking up the brand (after the vertical fins for french fries bent badly all askew) and finding that it was some $15 POS.

Currently, there is nothing I saw on Amazon that is as bad as that thing was.

You might start a “favorite mandoline” thread. I am pretty sure there are some strong opinions here, given our membership.

In any event, like I said, I find having a fairly good quality one really trumps trying to use the Cuisinart slicer appendage, and is surely more efficient than knife slicing considering time cost.

Good idea. Earlier today I searched on YouTube and didn’t find any decent reviews short of ATK (which over the years I have not had confidence in based on few products tested, and only the winner or a second place “value” offering even being mentioned).

I was 100% sure that was a William Safire quote, but it’s actually Spiro Agnew. My mind is going.

You were correct in the first place.

Bill Safire was his sometimes speechwriter (Nixon’s, too) and wrote the speech containing that line for Agnew. The media often misattribute it as a slam against them (the media) even though clearly he was talking about political opponents.

Oh! I knew Safire wrote for Nixon, but not Agnew. It’s interesting who gets credit for stuff.