I’ll propose a thread for my specific area, which tends to be hard to investigate at times, because it involves peripheral portions of three States–Southeastern Illinois/East Chicago; Northwest Indiana; and Southwest Michigan. It’s actually hard to find a map that covers just this area, but people traveling cross-country go through here in droves. The State-centric approaches favored by maps and websites work against understanding this area as a unit, which it really is.

An example: someone driving westward under Chicago and on the way to Detroit might do well to know that there is an outstanding Naples-style pizza place near the shores of Lake Michigan called Stop 50, in a little Summer-vacation town called Michigan City. You’d stand little chance of finding that place if you looked for Illinois, Indiana or Michigan pizza on Google. I’ve had pizza everywhere including in Italy: this place has got game. Wood-fired oven, all that.

Likewise where I live, in South Bend, IN, there are plenty of chains, Whole Foods, all that. But there are also some really excellent independent pizza joints and genuine Mexican places, off the beaten path. There is a place right off the 83-Mile I-90/I-80 exit called Giannetto’s that makes Chicago Style deep dish as well as any in Chicago (and I’ve had all those Chicago ones); likewise another place in South Bend proper called Toscana’s that makes perfect Chicago-style thin-crust. There are dirt-cheap and awesome Mexican places, many. (Not always located where you want to be at night alone, though.)

I’ve long found that Yelp is a source for reviews of places in smaller communities that I might go to, but the quality of the reviewers can sometimes leave much to be desired.

I think there’d might be some use for a thread treating an area that many live in and that probably millions more drive through every year. This is a crossroads area, and maybe we can gather spots to know.

I would propose that all the places between Chicago, the South Bend area, the Kalamazoo area to Lake Michigan, the Fort Wayne area, and Ann Arbor/Detroit would be relevant. Maybe Toledo, too. People do road trips through these spaces all the time, so freeways like I-94, I-80, and I-90 define that crowd.

Good luck. Calumet Fish is something out of the Blues Bros.

My dad really likes the Wheel Restaurant just off I-94 on Indianapolis Blvd in Hammond:

I’ve been there any number of times, he always has to stop if we are driving through the area.

I’ll try it when I drive to Midway airport from South Bend. Right off the highway! Thanks.

Yeah, Toledo is a stretch…

House of Pizza which is a little bit farther north on Indianapolis Blvd also does a decent thin crust Tavern style pizza: 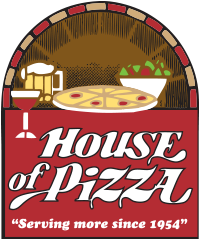 It’s been around for ever (I can remember going there as a kid in the 1960’s) but is still popular.

By the way both these places are in the Calumet region (aka “da Region”) which is strictly working class. But they are just a couple of minutes off I 94 and so much better than rest stop fast food.

Dinner for two with tip will run you $ 30 if you don’t order anything expensive. It will good, home cooked food and you won’t leave hungry.

They will also refill your coffee with a smile as long as you are ok with the coffee maybe sittin 30-40 minutes on the Bunn o Matic brewmaster instead of Starfekkinbux.

So I talked with some of my relatives who still live in the region.

They also recommend San Luis for Mexican. It’s on Indianapolis Blvd in Whiting north of the toll road, kind of on the way to the casino.

It’s not fancy but big portions and they say it’s very good.

Calumet Fish is something out of the Blues Bros.

House of Pizza still has a lake perch dinner on the menu.

The restaurant was Henry’s in Algonac if @RedJim remembers the place.

It was all knotty pine, had a salad bar shaped like a ship, and was on the main channel in the St Clair river.

So close you could almost reach out and touch the freighters…

I think you mean Northeastern Illinois aka “Da Region”

The restaurant was Henry’s in Algonac if @RedJim remembers the place.

Henry’s dropped to the wrecking ball about six years ago, VK. Lamented, because it was a favorite of my Mom & Dads’ too. Had many a great meal there when the family took a day trip along Lake St Clair and the St Clair River.

I have three “go-tos” for great lake perch: Junction Buoy in Marysville, Marine City Fish Co., in Marine City, and Pat O’Brien’s Tavern here in my hometown. Just celebrated a co-birthday with a granddaughter at Pat O’Brien’s and the Perch was stellar–as usual. Service was outstanding as well. I’ll post a review later today.

I think you mean Northeastern Illinois aka “Da Region”

Nope, I meant what I said. "Da Region"or Calumet Region refers to the areas drained by the Big and Little Calumet Rivers:

Coordinates: 41°33′N 87°27′W / 41.55°N 87.45°W / 41.55; -87.45 The Calumet Region is the geographic area drained by the Grand Calumet River and the Little Calumet River of northeastern Illinois and northwestern Indiana in the United States. It is part of the Great Lakes Basin, which eventually reaches the Atlantic Ocean. It is a sub-region of the greater Northwest Indiana region and the even larger Great Lakes region. This region includes the northern parts of Lake and Porter counties and the...

It used to be home to the industrial heartland of the Chicago area. Standard Oil, US Steel, Bethlehem Steel, Ford Motor all had huge plants there. Most of these were on the Indiana side of the border, but clearly visible from the tall buildings in da Loop.

On the Illinois side of the border it is also home to the Illinois State pen in Joliet and the fictional st Agatha’s of the Blues Bros fame (@notjrvedivici) in Calumet City.

The Calumet area is a thing unto itself. I didn’t know about “Da Region,” but I guess it’s of a piece with SNL and “Da Bears.”

No offense intended, but perhaps you can look at a map of Illinois and let us know in your learned opinion where Will & Cook counties lie in relation to the rest of the state.

The Calumet area is a thing unto itself. I didn’t know about “Da Region,” but I guess it’s of a piece with SNL and “Da Bears.”

It long predates that.

And in fact those douche bags were cake eating cubs fans.

No self respecting person from da Sout Side or da Region would ever route for the cubs.

But South siders love all contact sports especially baseball as practiced at Comiskey (or da Cell), where umpires are fair game.

The also do not like disco, as evidenced here:

PS. I was watching this game, which was vs. the Tigers @redjim.

Cake Eating Cubs Fans. Now we’re getting down to business. …

I think people in Waukegan, Illinois (Lake County), would claim Northeast Illinois for their own. But, whatever. It’s way more north, a bit less less east, than the Calumet area.

And I would agree with you about that. And Chicago and the burbs too. It’s all Northeast Illinois.

Certainly about Waukegan and “Chicago and the burbs too. It’s all Northeast Illinois.” That area will be pretty well served by the Chicago area postings, though. (Maybe not Waukegan.)

I was interested in a foodie thread that addresses something I also noticed in maps when I moved here. You can buy State maps, but I have yet to see one map that targets the southern reach of Lake Michigan, which involves three different States. A lot of the interesting food places are on the roads through there. I mean soon to try a BBQ place in Niles, Michigan, that’s supposed to be excellent.