Vegas is blessed with satellite Chinese restaurants from Los Angeles, and noodle focused Mian, the offshoot of Chengdu Taste, was my priority on a recent trip.

The menu is short and as user-friendly as can be—each dish has a pictures, and its ingredients and even vegan status are noted.

Cold starters are cheap, so it’s easy to sample a bunch, 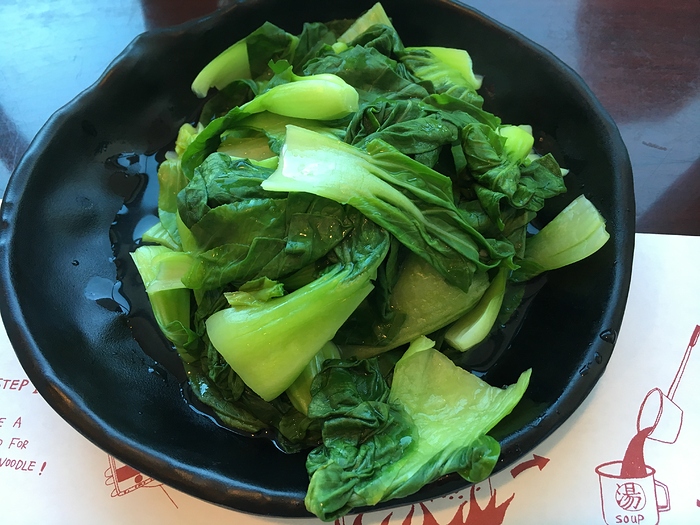 Steamed greens, tender crisp and unsalted and held their shape. 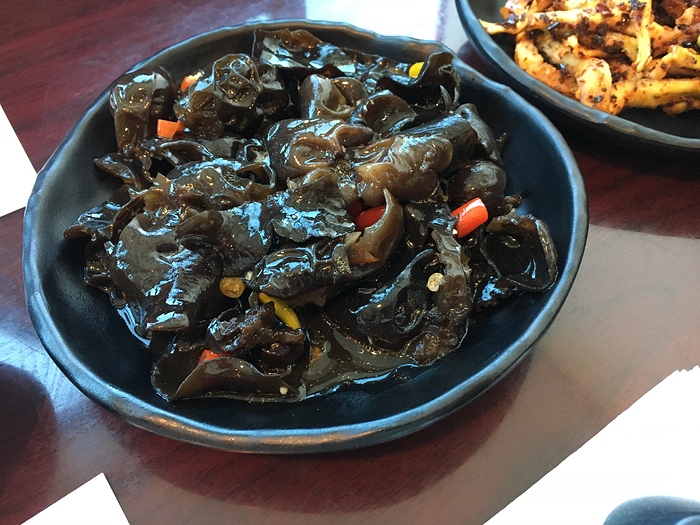 Spicy black fungus had a balanced mix of sesame oil and pickled chilis, and was less oily than the version at the Taiwanese deli in the adjacent shopping center. 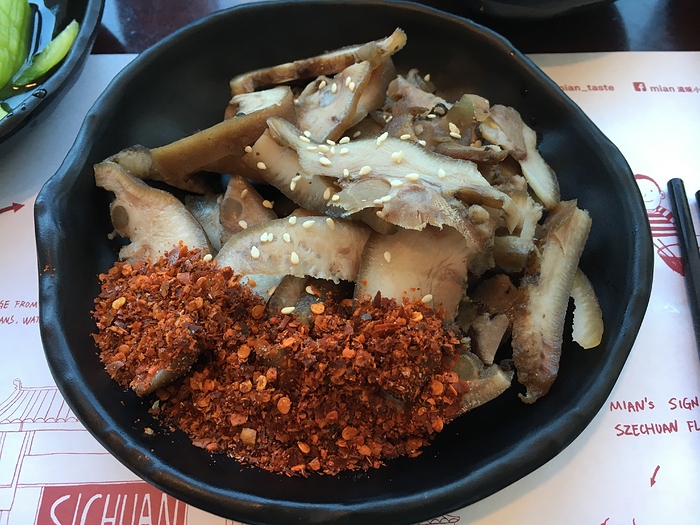 Marinated pork, stewed until soft and cartilaginous, had a dry chili dip. I thought this was foot, but it’s listed as mouth 嘴. 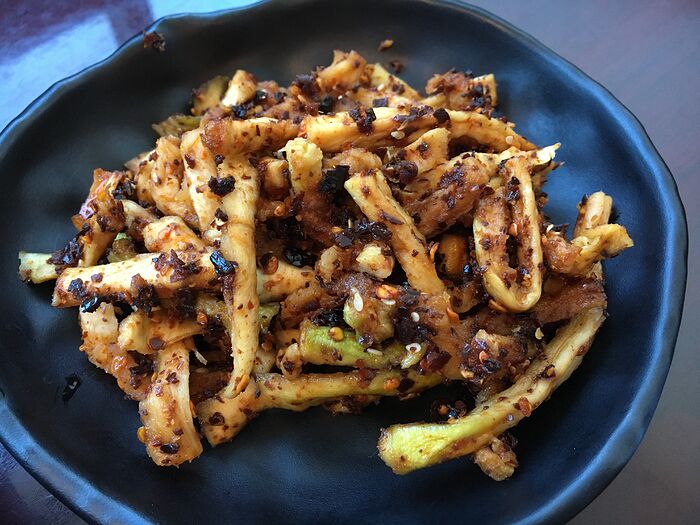 Spicy radish (dried radish) had a fresher feel than versions I’ve had at Korean restaurants. 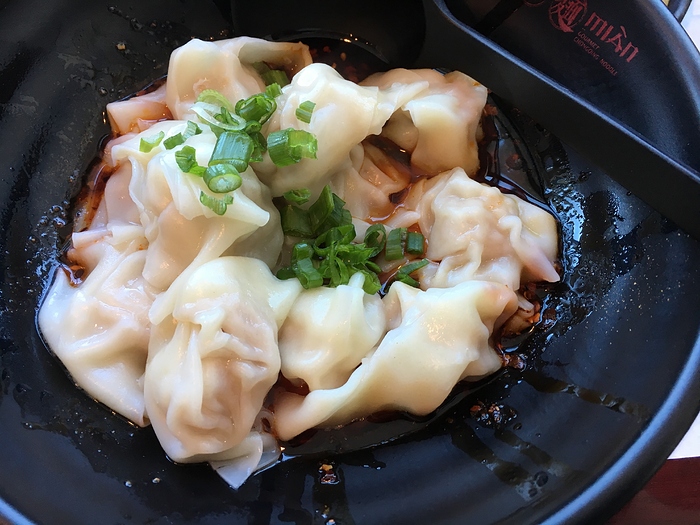 Chili oil chaoshao (red oil wontons) had an intense, aromatic sauce, and had an edge on any version I’ve had in the Bay Area. 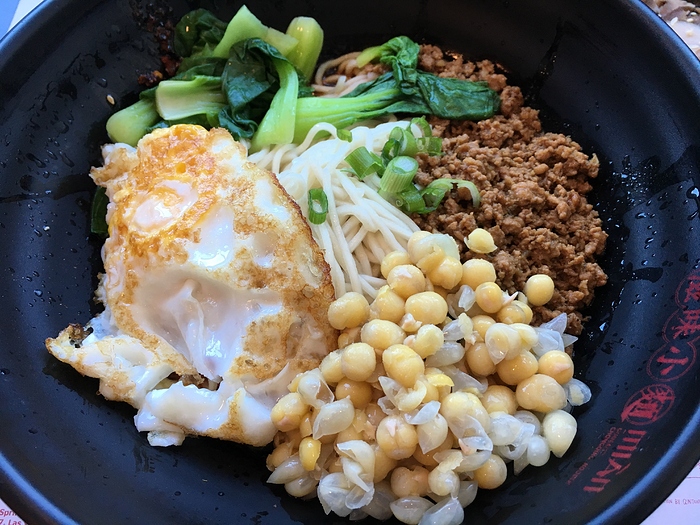 The Zajiang Noodles, which Jonathan Gold named one of his top 10 dishes a few years ago, lived up to the hype. I got the version with yellow peas, which are placed on top of the noodles. They are served cold and have a little starchiness in the center. The mixture of meat, sauce, egg, and stretchy noodles was delicious.

I had a late lunch at Mian.

This free drink was in a cup labeled “soup.” It was a little sweet and around room temperature. It’s a lightly sweetened mung bean soup, apparently helps counteract some of the spiciness. 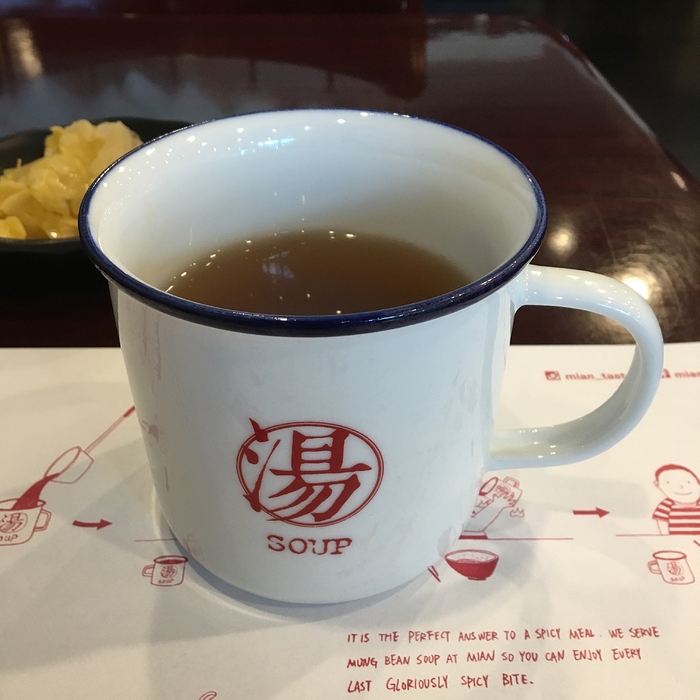 Table mat that doubles as an instruction manual. Step 1 is take a photo for your noodle. Done. 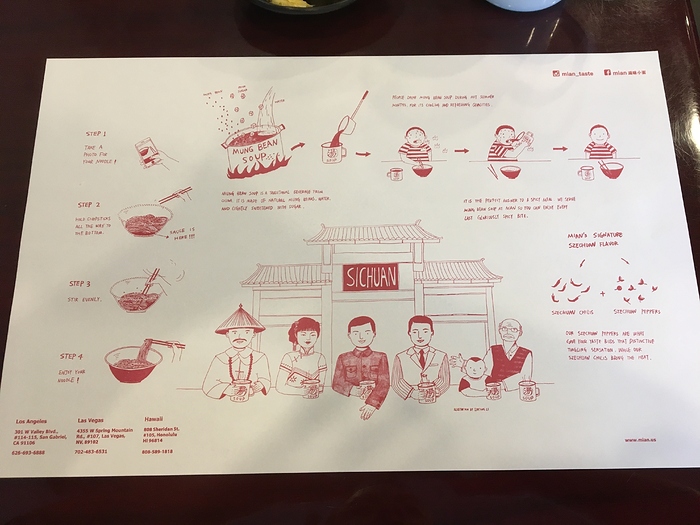 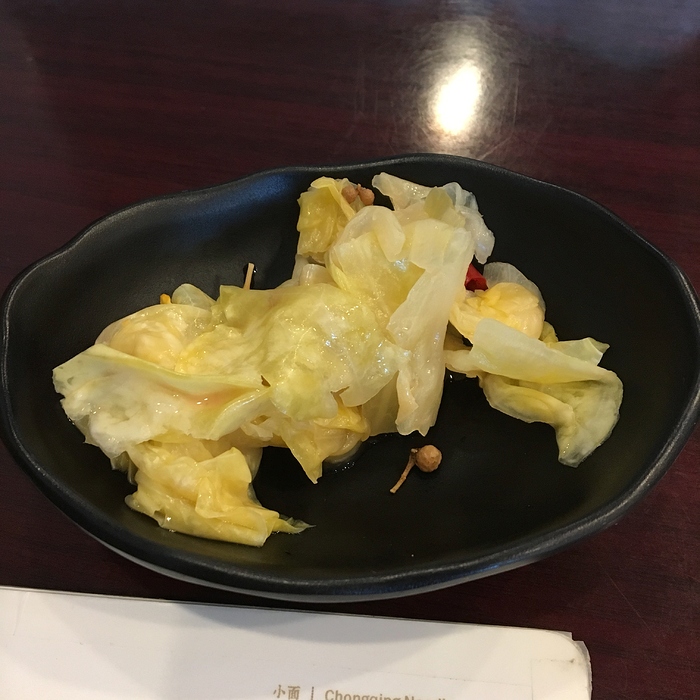 Chengdu zajiang noodles ($8.99). Homemade noodle, pork, green onion, a fried egg, vegetables. This was quite good. Nice texture and chew in the noodles, and good spicy porky sauce with some spicy oil that coated the noodles. I wish the fried egg was a little more runny in the yolk. It was fried over hard. 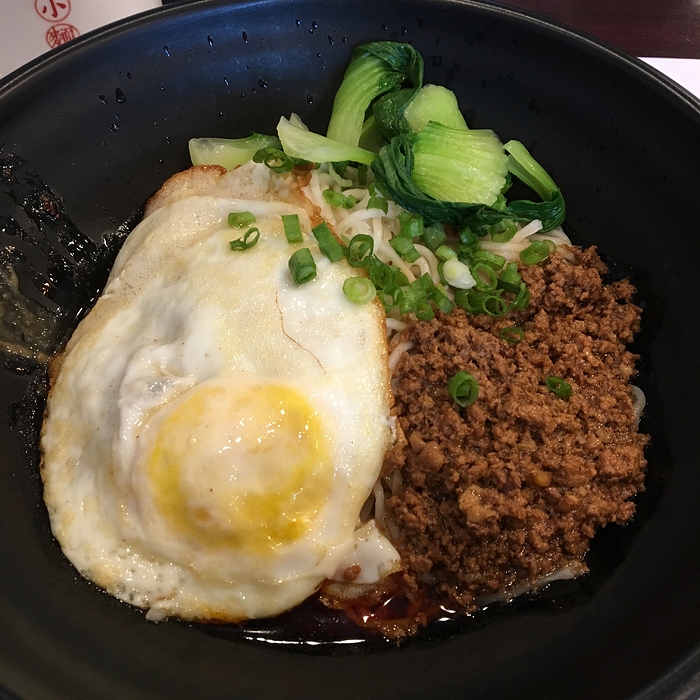 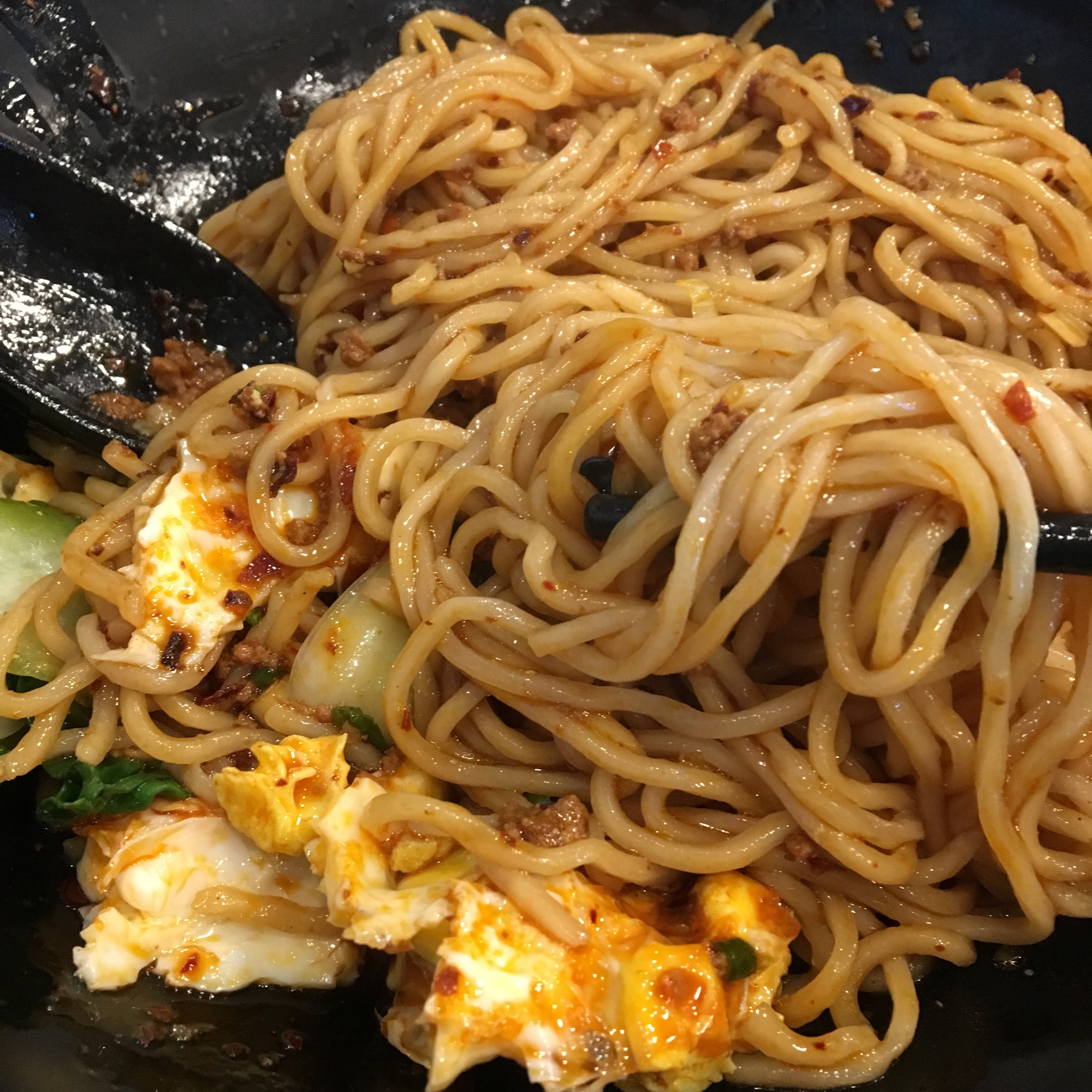 Spicy and sour chaoshou ($8.99). Chaoshou are Sichuan wontons. These were great!. They were in a salty sour spicy broth that was a bit addictive. The chaoshou themselves had light wrappers and a delicious pork filling. I’m not sure what seasoning they put in the filling but it was especially savory and flavorful. Good smooth texture too. 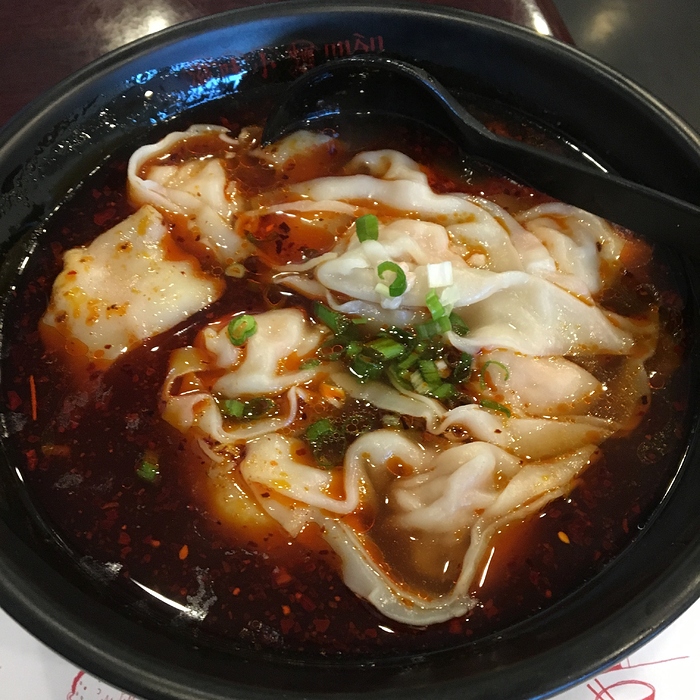 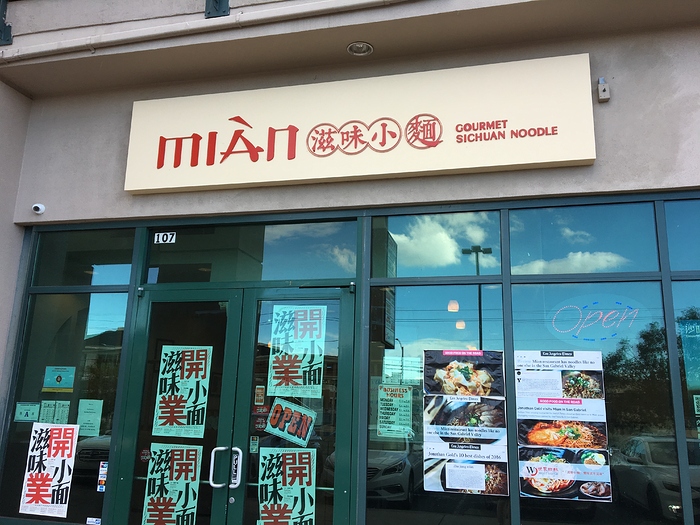 I just missed you, I was there last Saturday. I have to try their zajiang noodles.