We enjoy Juanitos in Red Bank…nice venue, good food at a very reasonable price. And always a plus, BYOB. If Freehold was closer we would opt for El Meson on West Main Street in Freehold Borough. We both feel their food is a notch above Juanitos. I love the chorizo burrito and my wife the vegetable quesadilla at both places.

@bbqboy I can tell you it’s not habanero; much less heat and an interesting and unique flavor.

Gah, this question is nearly impossible for me to answer. Actually it is impossible. There’s just something about tacos. Even if I count all the tacos I’ve eaten in California and Mexico I honestly can’t pick my all time favorite. I’m gonna just say this is a defect on my part.

The best I can do is tell you the most memorable taco I’ve ever had, which was the Al Pastor from El Rancho. It was so long ago that I can’t objectively judge it - it was my first authentic taco.

What about you? Any current absolute favorites?

You, equal mark and tapas got me into real Mexican tacos a few years back. Thank you! Lol

If you are referring to El rancho in long branch, I’ve tried it a few times. It was OK but didn’t stack up to other tacos joints locally. I’m not putting them down, I just didn’t have great tacos. I would have to try some more styles before writing them off.

I don’t get to AP much so I can’t comment on the Mexican scene there.

If i had to pick my “go to” tacos I would say the chorizo tacos at Linos in RB. They are delicious! I love these things! They are spiced well, the sausage grind is awesome and not course/gritty. It is very fine blend with good paprika seasoning. I like sitting next to the rotisserie fire and having a few brews when it’s cold out. You get 4 tacos for 7.50. If you sweet talk the senoritas they will give you a basket of chips and salsa. The salsa isn’t that great but for free I can’t complain. I jazz it up with some of their hot sauces. It’s kind of sweet for me so I heat it up. This is my winter taco spot for sure. That fire and hickory wood pit are speaking my language

@bbqboy I’m not sure to be honest, but it goes well with the al pastor tacos. It doesn’t overpower the pineapple and cilantro. @seal mentioned these today so I got motivated to go pick some up

Chilling with the locals… 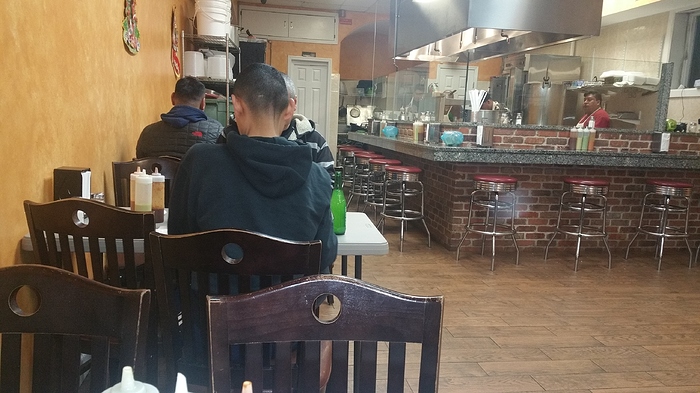 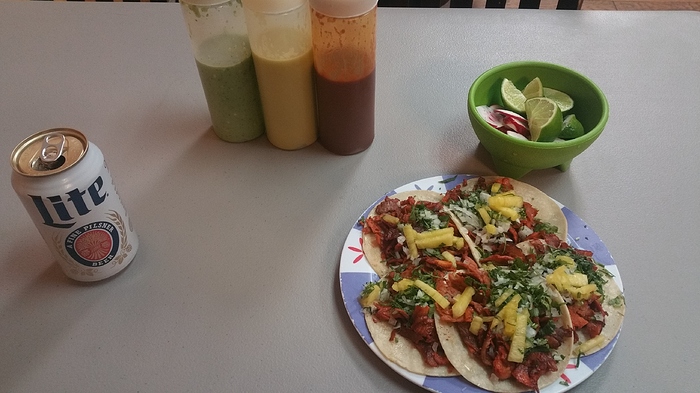 Looksgreat! where is this? what else is good here?

I’ve eaten at International Mexican Grocery at least two dozen times and I’ve never had anything except the al pastor. I usually get a half kilo to go and they throw in a bunch of tortillas and salsa. One of my favorite ways to enjoy this awesome meat is with eggs for breakfast.

Almost forgot, they are on Bridge Ave between Monmouth and Oakland in Red Bank.

I do find the al pastor needs a tiny bit of salt but it’s really good off the spit. Have you tried the linos chorizo tacos? I’m a big fan as mentioned

Tyvm @corvette_johnny. We went to Lino’s last night and had some great tacos!

nice! what did you end up getting? I think i have had most taco variations there.

We had tripe and chorizo - both were very good. You ever have their Mexican pizza?

No I can’t say I’ve ever had a Mexican pizza anywhere. How about you?

I mentioned in some thread or other that “tlayuda” was Mexican pizza. El Pollo y La Oaxoquena in Keyport used to serve it.

Yes sir ! For 8 bucks that is a nice meal and the pork is nicely toasted from the spit and then pan fried I believe. The cilantro could be a little more vibrant but overall I give these a thumbs up. I’m not sure but the cilantro didn’t have the “bite” I like the other night. Keep in mind very little English is spoken here so you need some basics or “point and play”

I missed the old ch taco crawl but maybe we could get one going again in rb.

PEOPLE. (And I’m mostly looking at you, @joonjoon )…

I heard last night that there’s a quincinera shop on Main Street in AP THAT ALSO HAS TACOS. INSANELY GOOD AND INSANELY CHEAP TACOS.

@CurlzNJ I may have to go for a ride tomorrow…

So, Mr. Bean and I were out and about doing errands and decided to try and find this place. We found one quinceanera shop on Main that had potential, Celebrations Boutique, diagonally across the street from the former Salvation Army store. We were driving too fast to stop so had to turn around and came back to it.

We couldn’t see signs about food so decided to go in and ask. The woman there had no idea what I was talking about. So we crossed back to the car and realized we were parked in front a panaderia (bakery) that had comida rapida (fast food). So we stopped in.

This place may not have been what we were looking for but it didn’t matter. It was very good, with a nice menu that includes 15 types of tacos, tortas, entrees, and specialties among other things. Since it was early afternoon and we’d already had lunch we weren’t very hungry and decided on a Taco de Carne Asada, Taco Al Pasor and what they called an Empanada Mollejo and described as chicken.

The tacos were very good, definitely served on handmade corn tortillas. The empanada was more of a large corn tortilla folded and filled with a tomatoey stew of chicken gizzards with epazote. I’d never knowingly had epazote before and I couldn’t decide if I liked its resiny flavor. I adore gizzards and these were cooked perfectly.

We will definitely be back to try more of the menu. It’s the kind of place to want to go to with friends so you can order a lot of food and try everything (Hint, Hint)