“Fast food chain McDonald’s has started offering fresh beef in burgers sold at its US restaurants.” 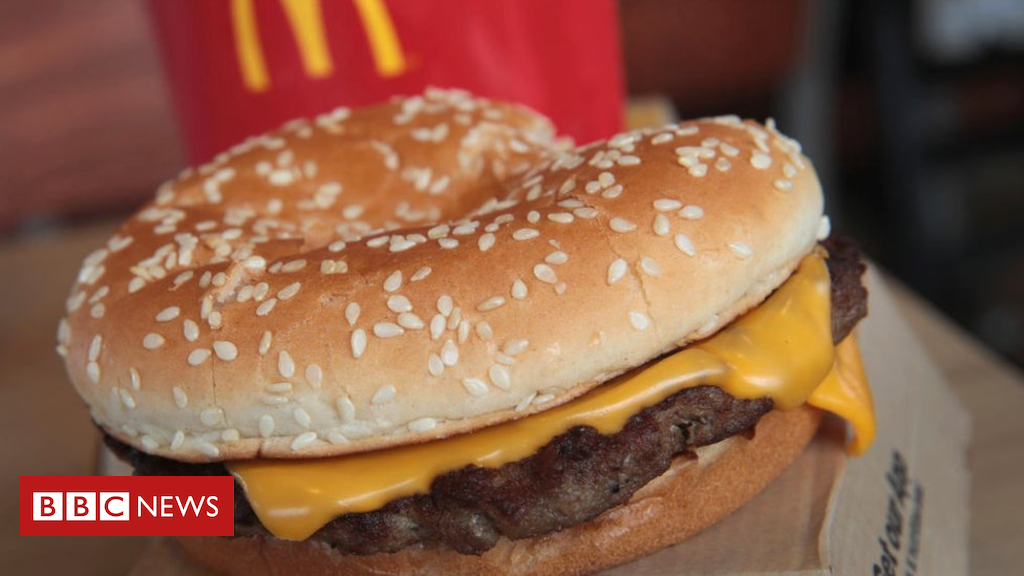 McDonald's to switch to fresh beef in US

The fast-food chain is now making its burgers from fresh beef at some US restaurants.

"McDonald’s (MCD) announced Tuesday that Quarter Pounders in every US store except for ones in Hawaii and Alaska will have fresh beef without added preservatives starting in May. " 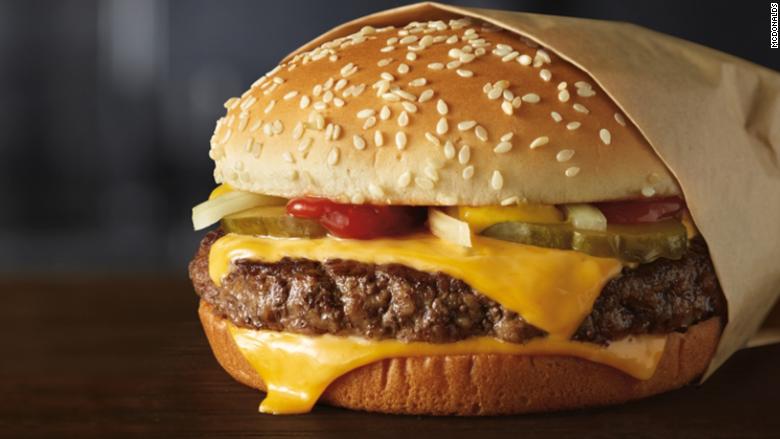 McDonald's is putting fresh beef in the Quarter Pounder

Frozen beef is out. Fresh beef is coming to McDonald's Quarter Pounders.

I was curious as to what “fresh” beef actually meant. So it will be “fresh” not frozen. Are they even grilled on premises anymore or were they just frozen and microwaved? I don’t recall seeing a grill in ages, just those warming stations/tray’s the meat lays in until the assemble the burger.

From the USA Labeling Compliance site:
"Fresh, “Not Frozen” and Similar Terms when Labeling Meat and Poultry Products

The word “fresh” may not be used to describe:

So if I understand the verbiage, since McDonald’s is not claiming “Never Frozen”, they can indeed sell frozen patties as long as there are no preserving methods (#6 & 7) and still call them “Fresh”.

They have tried the fresh quarter pounders at a select few test locations to work out the kitchen logistics. In order to roll out nationwide and have enough supply, I imagine they must need to stockpile enough first. How would they keep those fresh? Somewhere above 0 F so that it isn’t technically “frozen” such as is the case for poultry?

I love this response by Wendy’s to McDonald’s announcement about 10 months ago: 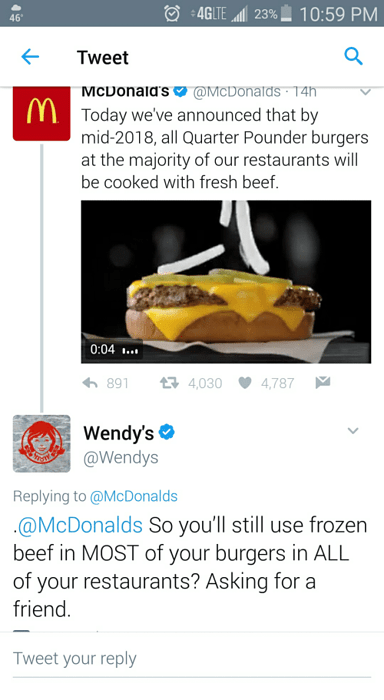 I know. It kind of asking for it but only stating the quarter pounder burgers will be fresh. In this case, I think McDonald really also mean non-frozen as well.

Who do you think actually has the rights and the password for the Wendy’s twitter account? Do you think the ceo/president makes comments on his own, or do they literally have meetings to decide what to say and some marketing person posts the tweet? (Or maybe it’s some kind of middle management marketing team…I have no clue)

I think usual social media comments are below CEOs. A communication director of sort usually can handle approval. However, I can see this particular one may go all the way up to the CMO (Chief Marketing Officer) for a quick approval. Just a guess.

You’re probably right. I think when the biggest food entity in the world gets involved, they might escalate it like you said.

Mcd has a special right now where you can get any sandwich (minus the double quarter pounder and their new signature chicken sandwiches) for 1.00

I tried the grand big Mac for a buck 2 nights ago. You need to have their app and you have to order on your phone, but it is super easy. I am not going to lie, I like big macs. For a buck, the larger size big Mac, which is limited time only, was tasty. 1.00 made me a happy guy lol. 1.07 with NJ sales tax. If I wasn’t over weight I’d eat more big macs and fries, but I limit myself to 2-3 a year. For a buck I’d try this out. It is only available for a few more days. @joonjoon give it a shot

I don’t like Big Mac. I like Filet-O-Fish and Egg McMuffle. However, you are right. You cannot beat a $1 big mac.

Good question. McDonald is probably testing water at this point. You are correct. I believe Fortune magazine states this is going to drive the cost up. On the flip side, it will reduce cooking time and increase McDonald productivity – assuming there is a high demand.

“So what led to the decision? It certainly wasn’t a cost-saving strategy. Suppliers spent roughly $60 million to adjust for the transition and kitchens in restaurants had to be changed as well to create separate drawers for the patties. In the end, it came down to a few issues…” 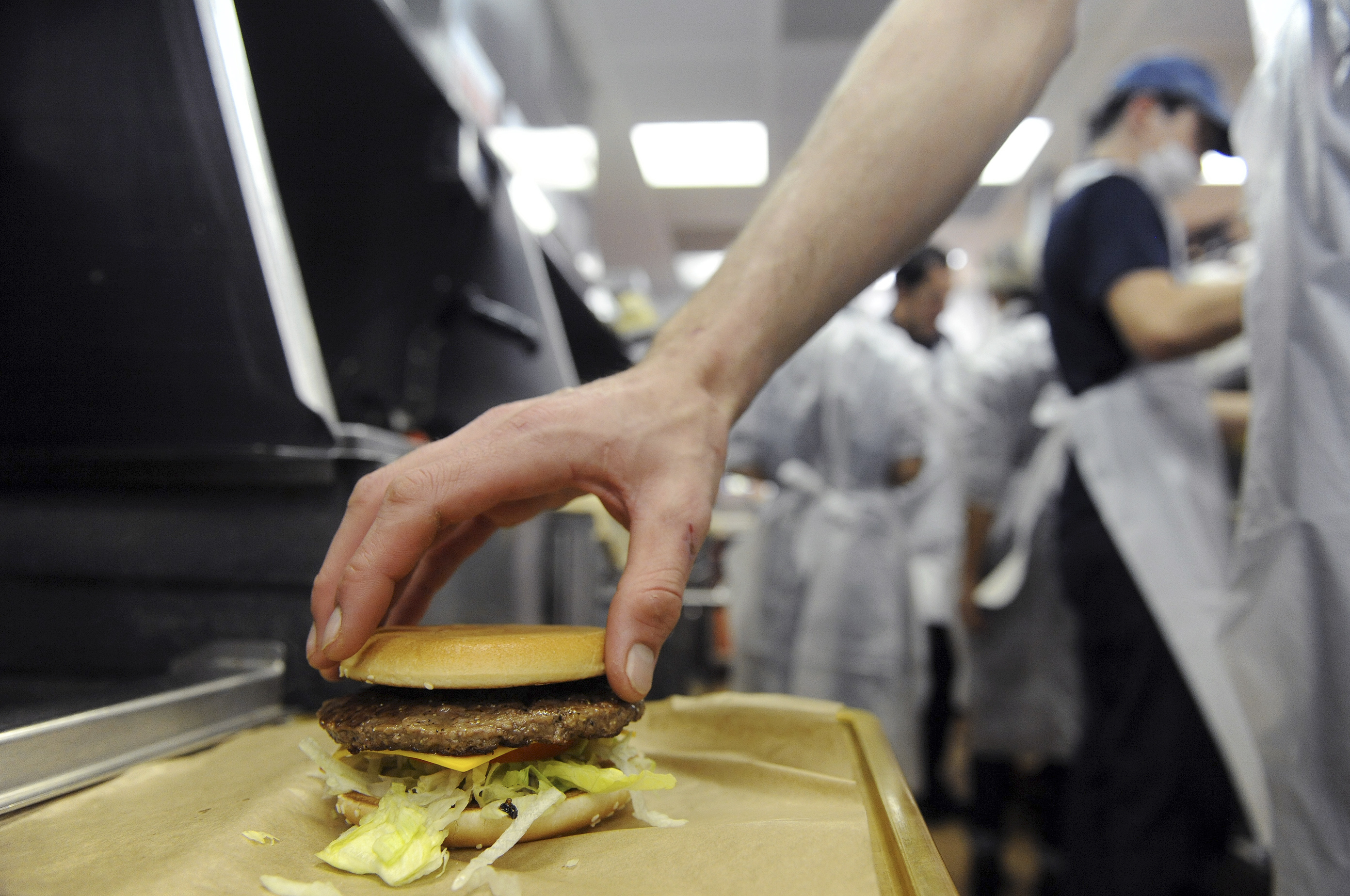 Why McDonald's Is Switching to Fresh Beef

It's certainly not to save money.

Are you the famous BiscuitBoy?

The dollar burger I had was the grand big mac…not sure if you saw that lol. It’s a 5.69 burger alone and I enjoyed it for 1.00

It was my first “bigger” big mac ever, and for a dollar I was happy. Obviously mcd is losing money here but trying to test the waters on how people will react to phone ordering. It is most likely is the wave of the future. Soon people will probably be ordering food on their car touch screens everyday

Fyi, there is a 2 for 1 fish sandwich on their app too. I’m not a fan but some people may enjoy this special.

So you are telling me that you are stealing.

Wendy’s fresh burgers are pre cooked and dry, long gone are the days of the old “hot and juicy” ad campaign.

I don’t expect much more from McDonald’s.

The masses want speedy food at the sacrifice of quality. I put the blame totally on McDonald’s.

The masses want speedy food at the sacrifice of quality. I put the blame totally on McDonald’s.

Shouldn’t the blame on the masses?

No stealing, just taking advantage of the system

I really wish I could get a burger cooked rare at Wendy’s or mcd. I bet they would be pretty tasty.

I hate lawyers and our court system. Seriously. And yes, this is why you can’t get a rare burger.