How do you do it? I’m talking crunch Jedis, save the chewy for someone else!

I think what you have to modify depends on what kind of recipe you’re starting with.

But with the types of cookies that traditionally used ammonium bicarbonate (“bakers’ ammonia”), then actually using that makes up at least part of the secret.

I’m not a baker, but am a fan of crispy cookies and these are my gold standard (we can buy them locally by the bag for 5.99 - sometimes on sale for 4.99 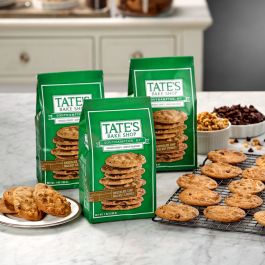 We don't think there is anything better than this paring of melt-in-your-mouth semisweet chocolate chips and crunchy, healthful walnuts. Pick up a bag of our crisp and delicious Chocolate Chip Walnut cookies and taste for yourself - we'll bet you...

I got the following at the link below (and I have no idea if the site is any good, but the page seemed legit). Here are their main crispiness tips:

All of those things either encourage more browning, or encourage the cookies to spread, or both. Forcing the dreaded “spread cookie syndrome” to happen is apparently just what you want in this case. (i.e. “But this will mean the cookies have no structure, no texture!” “Yes! Exactly!”)

Thank you - I’ve seen that link, but I was wondering if anyone here has had actual, hands-on, in the trenches experience with maximum crunch.

Get yourself a copy of Cookwise, by food scientist Shirley O. Corriher. It has a lengthy chapter on how to achieve crispy cookies, or cakey, or gooey, and explains WHY. This may also be covered in her later book, Bakewise, but I haven’t seen that one, and Cookwise covers all sorts of food. Both are decades old, so used copies shouldn’t cost much.

I’m right there with you on those crispy Tate’s cookies! I have found they have a multi-pack at Costco. They are smalled packages inside, so I don’t feel compelled to eat them all at once.

I have a recipe for pecan sandies from Stella Parks I’m going to try soon. They are supposed to be crispy and shortbread like. They use white sugar (less moisture than brown), and you let them cool on the pan they baked on. I’m hoping they will be what I’m looking for!

Speaking of Stella Parks, she has an article on Serious Eats discussing her process of reproducing the Tate’s cookies. I have made her recipe several times. I would recommend the OP start there.

@retrospek, if you are ever near a Market Basket they offer a crispy, thin cookie in their bakery section that’s worth a try. $3.59 for the package shown.

IMHO, these compare favorably to Tate’s. 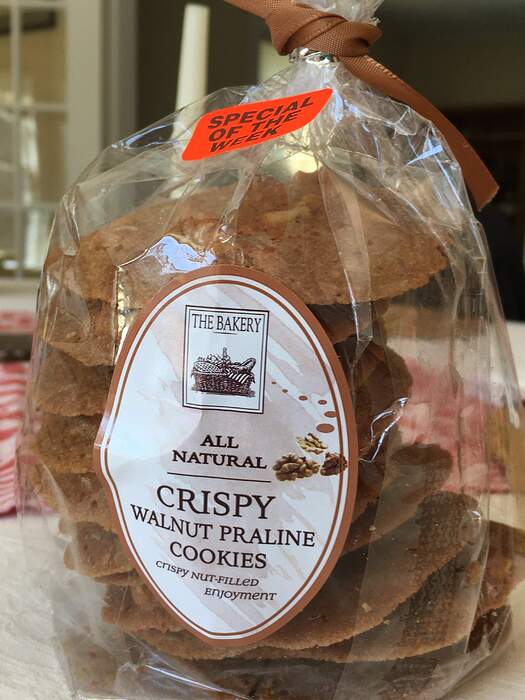 That canned advice works sometimes at least: these ones are very spread and very browned.

these ones are very spread and very browned.

Yes indeed. That’s the effect the producer is going for—which I can say because I almost never come home from the grocery store without a package of these cookies.

Good thing that I shop no more than once every two weeks.

I just reread that article and recipe. Thanks for the reminder. It says tha the cookies will stay fresh in an airtight container for up to 6 weeks! I’m lucky if I could keep them around for six days!!

Yes, those MB cookies are terrific! Since most of their in-house bakery items look far better than they taste, I was pleasantly surprised.

I should add that the oatmeal cookie recipe I created using Corriher’s basic guidelines are thin and super-crisp. I will bake them for friends, but don’t share the recipe because it has a few secrets I know most people will omit, and I don’t want to hear complaints that they didn’t ckme out the same. Also, my range is so old that I have no idea how steadily and accurately the oven heats. (The light socket died long ago so an oven thermometer is impossible to read.)

So very right. Those crisp Market Basket cookies are a happy exception, I agree.

Thanks for the tip. Those Walnut Pralines look yummy. We aren’t close to a Market Basket - nearest is 45 minutes from us at the canal in Bourne. I’ve only been in there twice since they built it. Always packed…too much trouble :o(

I’ve seen it - I note she has an unorthodox way of mixing the dough - no creaming butter & sugar.

Her own take on creaming:

By bashing butter against the sides of a bowl, whether you’re going at it with a spatula or with a stand mixer, you’re folding it over and over, creating little pockets of air with every turn.

I wonder what McGee & Corriher would say about that, but anyway, assuming it’s true, another question: does this happen when you cream chilled browned butter?

(PS - that’s not a nitpick on Stella. Her tips are always excellent. This was a great primer on creaming butter & gran. sugar.)