Hi, everyone. I’ve been on a low-salt diet for 2 months, with excellent results in lowering my blood pressure. Now, I’m going on a lower-carb diet to try to lower my LDL cholesterol. As part of the diet, influenced by the remarks about foods with soluble fiber here - https://www.pritikin.com/your-health/health-benefits/lower-cholesterol/1468-7-tips-for-improving-your-ldl-cholesterol.html - and remarks about the benefits of oat bran elsewhere, I’ve decided to make oatmeal and bought some steel-cut oats earlier tonight.

The problem with oatmeal is that I find it rather boring, but I love Indian food. Do any of you have any favorite masala oatmeal recipes or good recipes that could be adapted into a tasty masala oatmeal? It’s OK if your recipes have salt in them; I’ll just omit the salt, but I need a lot of taste. It’s also OK if your recipes call for massive amounts of ghee; I’m not on a low-fat diet but certainly use less fat and oil in my cooking than is commonly used in Indian food.

Quaker Oats is currently running a contest for new oatmeal flavors. Some of the ideas are on their website.

Chowhound has had threads on savory oatmeal.

If I were to concoct a savory oatmeal with Indian flavors, I’d start with vadouvan or caramelized onion.

Thanks for the thoughts.

I also asked for suggestions at eGullet, and I got a response suggesting just adding it to other dishes, so I think I’ll try using it as part of my sautee when making scrambled eggs. I make Indian-influenced scrambled eggs, and the first ingredients I put in their are garlic, some spices (especially seeds like cumin seeds) and then onions. I think I’ll try adding some oats and urad dal after that, before adding the eggs.

Not savoury but the first thing I though of when you posted was this dessert made with rice - you could swap the rice for oats: http://www.foodnetwork.com/recipes/aarti-sequeira/indian-rice-pudding-recipe.html

Here, cross-posted from eGullet, is my report on my first try at masala “oatmeal”:

I’m currently eating my masala oatmeal, but it isn’t really that, exactly. On the first attempt, it was a smashing success, although it took a long time to cook and I think next time, I’ll use my wok.

About 1 inch of fresh ginger, chopped

3 tablespoons or so of roughly crumbled “raw” cashews

a neutral oil (I used canola) as needed

Put a bit of oil into a wok or pan. Add the ginger and garlic, stirring until they are mostly cooked.

Add the onions and more oil as needed. Cook until the onions are close to done, then add the scallions if you like and repeat the process.

After that, add the spices and mix thoroughly. Then add the oats, urad dal, cashew pieces and curry leaf bits. Again add more oil as needed.

When the cashews seem cooked, add the tomatoes. You will probably need to raise the heat a little, but be careful not to burn the oats or dal.

When the tomatoes are mostly cooked and the liquid is somewhat reduced, add the mushrooms.

Wait until the mushrooms are cooked to add the eggs, but it is not necessary to wait until the water evaporates. Mix, making sure to coat everything with egg.

When everything is thoroughly mixed and the eggs are cooked, add the yogurt, mix thoroughly, and add the lemon juice. Simmer a bit to reduce the liquid somewhat and cook the mixture.

The result should still have a good deal of liquid - indeed, the texture should be something like oatmeal, but crispier. Distribute it into bowls for eating.

Thoughts on this improvised recipe: First, it was delicious. However, I couldn’t taste the scallions, so I think I’ll use them in something else. The ginger was somewhat present, but I think I’ll at least double the amount next time to taste it more. I used few ajwain seeds because when I opened my newly-bought bag, they smelled strong, but I couldn’t taste them much, so I’ll put at least 1/3 of a teaspoon in next time. I also will use an entire container of mushrooms if I have one handy next time (I had only half a container left). The quantity of tomatoes seemed good; I didn’t really taste them separately, but they were part of the mix and also helped add water to it.

But more worked than didn’t work. The texture of the oats was pleasant, in this combination. The lemon juice was great, and I don’t think vinegar would be as good. The spices all came through except for perhaps the paprika and to a large extent the ajwain (and turmeric just gives food a subtle earthiness, so I’m sure it helped, but the taste wasn’t that present even with a whole teaspoonfull), and the curry leaves were especially nice. The cashews also really helped. By the way, the cayenne was definitely present and the large amount of yogurt cooled it off some, but if you are sensitive to chili, decrease the cayenne or omit it, then taste it to see if any should be added.

Next time, I may try using some mustard oil. I thought I had some, but I couldn’t find it. I also would love to add some really substantial green vegetable to this like kangkong (water spinach), adding it before the tomatoes (or possibly in lieu of them, for a different variation).

Final comments: The urad dal and oats form a paste, so be careful of that. If you prefer, add more oil (but I wouldn’t have wanted more than I used, which I’m guessing was perhaps 1/8 of a cup in total at most). Some people might prefer using less oats, but the result was very good. Also, for those who like it (and aren’t trying to avoid them because of their glycemic effect), you could easily add some raisins to the combination of urad dal, oats, cashews and dried curry leaves. And finally, I’m not sure what role the eggs had in this dish. I suppose they could be omitted, and I don’t know what it would have been like if I had used 5 instead of the 3 I had left.

Are you familiar with upma? It’s semolina cooked with spices. It’s like a really thick porridge, served for breakfast. Try an upma recipe and replace the semolina with the oatmeal. Here the one I usually follow, but I don’t use cashews and sometimes add chopped veggies like carrots, peas, and green beans. 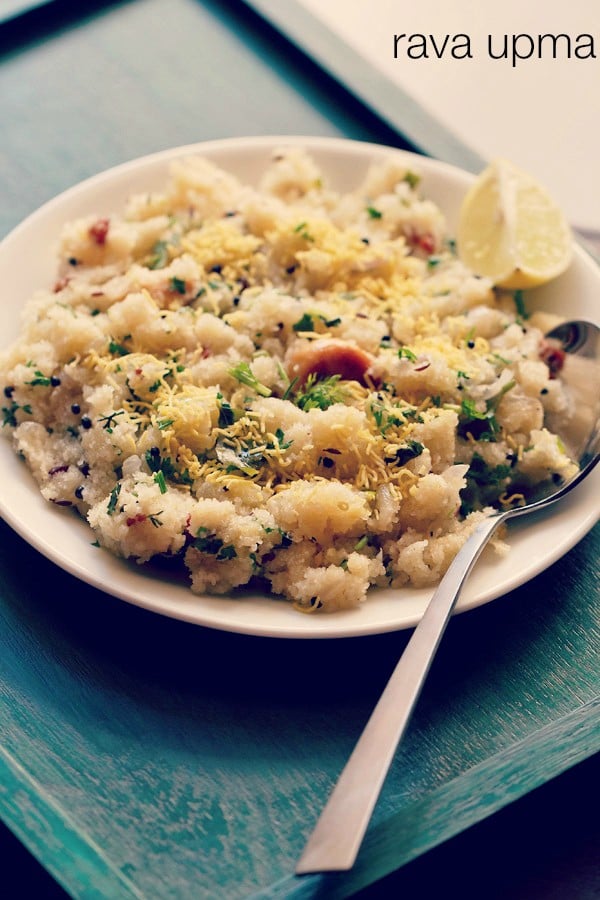 upma recipe with video and step by step photos. tried and tested south indian style rava upma recipe. upma is a traditional south-indian breakfast item made from rava (semolina). upma is served with coconut chutney, lime slices or lime pickle. It can...

I’ve had this recipe flagged a while and still haven’t made it… You use the oats in a preparation like fried rice, so it would be easy to add in more veggies. This version uses thai flavors but i’m sure you could follow the same basic preparation and swap around the spices and such to use indian flavors
http://blog.bobsredmill.com/gluten-free/meatless-mondays-thai-stir-fried-oats/

The photo looks like something I’ve eaten before. Thanks for the idea.

Thanks. This does give me some ideas. For example, I can certainly get limes and shredded coconut easily, and I eat pineapple frequently but haven’t been cooking with it. I didn’t soak the oats at all today. How essential do you find that to be?

What do you mean by “cook them halfway”?

Oh, sorry- you can boil steel cut oats like pasta to basically par cook them. Use a lot of water and boil, then add your oats and cook at a hard simmer about 10-12minutes- taste a little and be sure there isn’t a rock hard center any more, but will still be firm. Then drain the oats well and proceed with the recipe.
Or if you want oats for dinner you can start them soaking when you wake up and that’s good enough

upma with rava is a great option too

If I were to concoct a savory oatmeal…

I would begin by spelling it savoury, because it sounds more savory with an extra letter, like if you said savoury with a mouthful of oatmeal. Yeah well I have fifty pounds of rolled oats, so I was wondering about concocting something. Let’s see, Spanglish oatmeal is pretty good, like Spanish rice (but more savoury).

Vadouvan (occasionally spelled Vaudouvan)… you can’t make this stuff up.

I like Meera Sodha’s dal recipe so much and think it would adapt well to oatmeal: https://www.telegraph.co.uk/foodanddrink/recipes/10922264/Daily-dal-recipe.html