Malaysia and Singapore have always fought over not just who has the best hawker food in the region, but also who actually has the bragging rights over “owning” a certain hawker dish. Which all seemed pretty silly to me - seeing that both countries were once a single entity during British colonial rule, and with a shared legacy in cultural, linguistic and culinary terms. It’s almost akin to Tokyo and Osaka fighting over who actually “owns” the tempura dish. Sure, there are regional variances, but by & large, the dishes in question have common origins.

In Malaysia and Singapore, there are different renditions of popular hawker dishes like “char koay teow”, “Hokkien mee”, “chee cheong fun”, etc. depending on which region/state you’re in.

One of my favourite noodle dish is the “curry mee” (mee is the Hokkien (Fujianese)/Teochew (Chaozhou) word for noodles), and is often used in Malaysia/Singapore, Thailand and Indonesia, where the Hokkien & Teochew Chinese settled in large numbers for centuries, and introduced the noodle dish to the local indigenous population.

I like all types of local Malaysian and Singaporean curry mee, which is almost akin to Burmese khao shwe or Northern Thailand’s khao soi, appearance-wise, at least. All involved noodles, either made from wheat or rice, served in a spicy, curry-flavoured soup or gravy, and garnished with various meats, vegetables or other condiments.

But, despite the same label given to the noodle dish, curry mee from Singapore can be as distinct from its Ipoh cousin as Burmese khao shwe is from Thai khao soi. In turn, KL and Penang versions of curry mee also have their own characteristics. Below, I chronicled my favourite curry mee from across Singapore and the various cities in Malaysia.

The curry gravy here is savoury and slightly sweet, and a very spicy chili paste/oil is provided to add an additional spike of heat to the dish.

The two foremost curry mee stalls in Singapore - Heng Kee and Ah Heng are located in Hong Lim Hawker Centre in Chinatown, Singapore. Long queues of hungry Singaporeans form each day when the two stalls open. I queued for 1.5 hours to get my bowl of noodles from Heng Kee last Saturday, but it was well worth it. 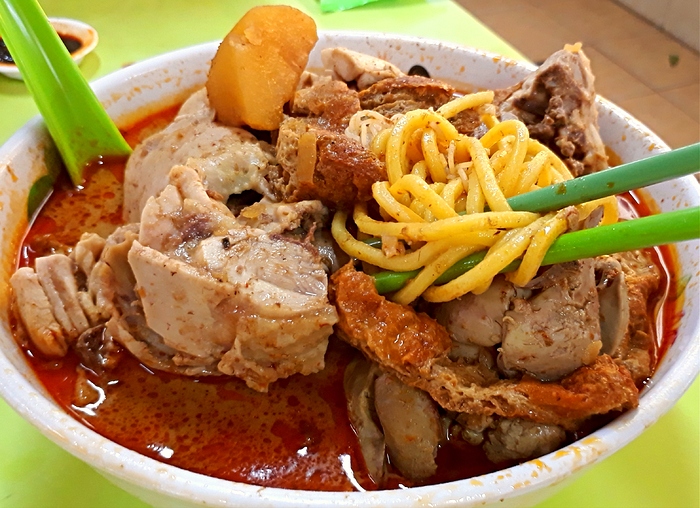 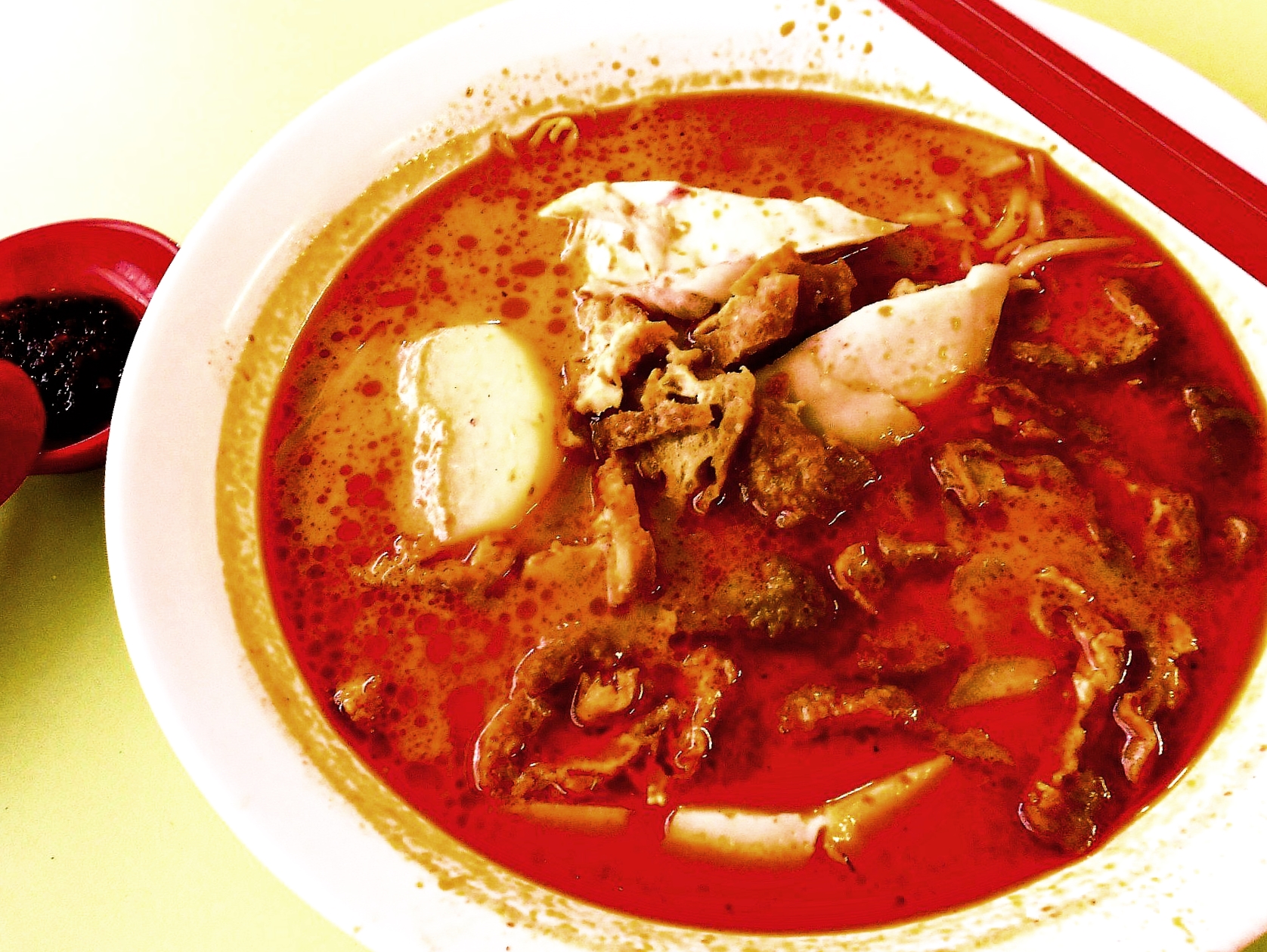 Penang curry mee uses dried shrimp to provide the underlying flavour for its soup/gravy - similar concept to Katong laksa. Penang curry mee must have cubes of pig’s blood jelly, barely-cooked blood cockles, strips of cuttlefish, de-shelled shrimps and tofu puffs (“taupok”). Your bowl of curry mee will come with a sprig of fresh mint leaves as a final garnish before being served. 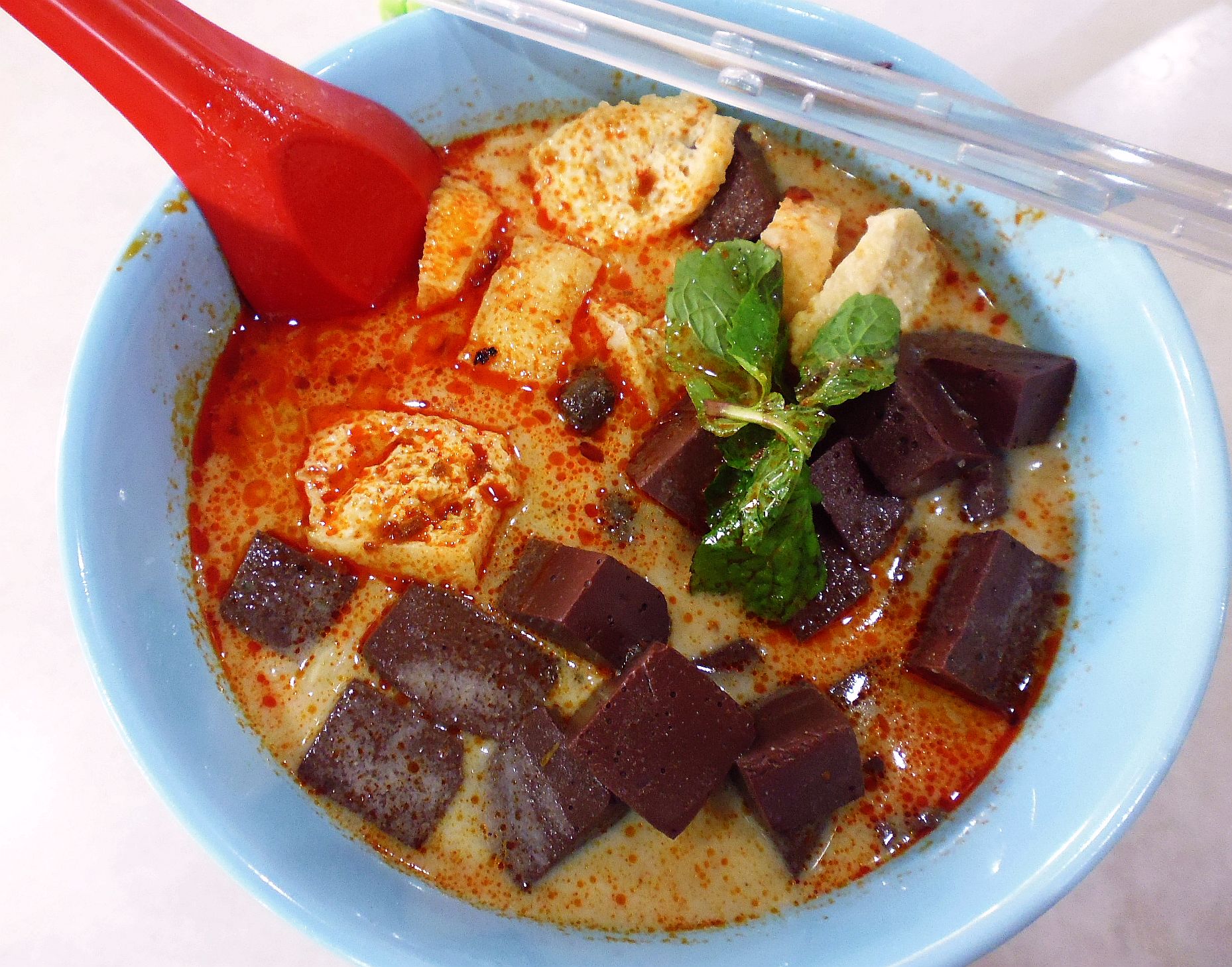 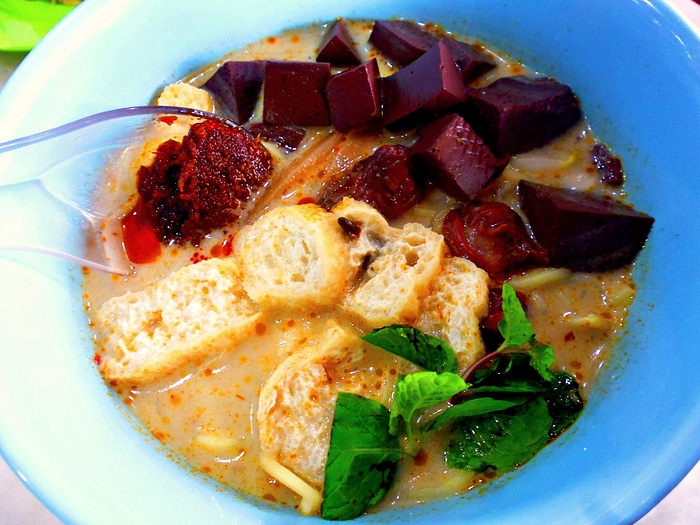 Ipoh’s curry mee, interestingly, is as robust as they come. Ipoh curry mee spots across the city uses various types of noodles for their curry mee, from the wheat “wantan mein” noodles, to the thicker Hakka bamboo-pressed noodles. But Ipoh curry mee vendors compete on who has the most robust flavors, with the thick curry gravy made from a blend of Indian curry powder, aromatics like cinnamon, cumin, coriander, star anise & cloves, plus copious amounts of minced ginger, onions and garlic. 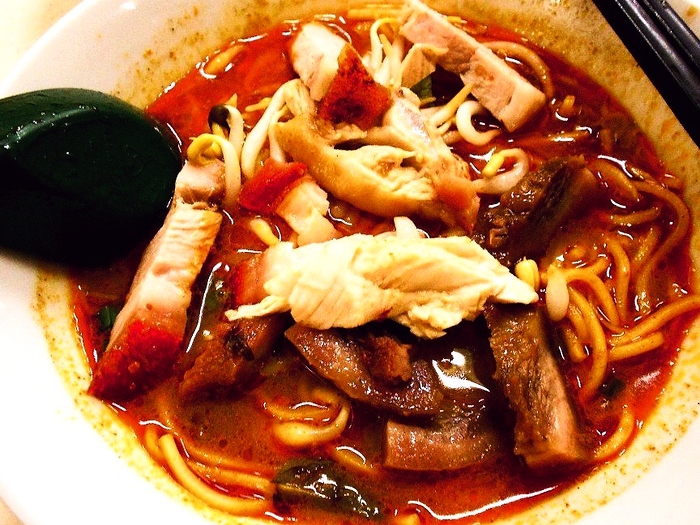 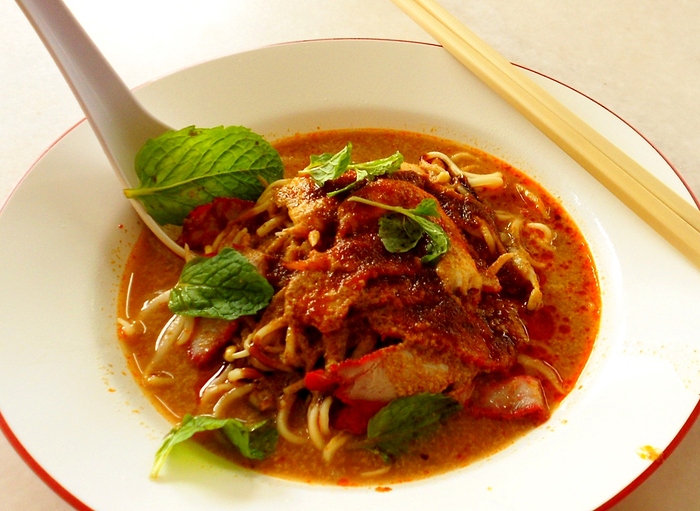 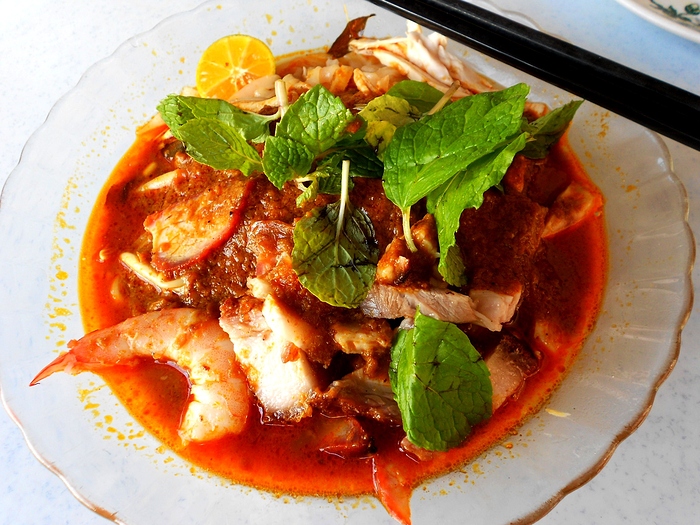 KL’s curry mee has perhaps the most robust flavours of all the regional renditions. It also uses curry powder like Ipoh’s version, but not so much in terms of other spices like cloves, cinnamon, etc. KL’s curry mee comes with poached chicken meat but, unlike in Singapore where a meat/chicken curry blend is used, KL’s version utilises a seafood curry blend (which I don’t quite like). KL’s curry mee has its trademark long beans, aubergines and pig’s skin to accompany the noodles, besides blood cockles.

Recently, Lonely Planet listed KL’s curry mee at No. 2 in its list of Best Food Experiences around the world. I don’t agree.

Madras Lane - a small backlane in Chinatown - has 3 popular curry mee stalls lined up side-by-side. Come here if you want a taste of KL-style curry mee. 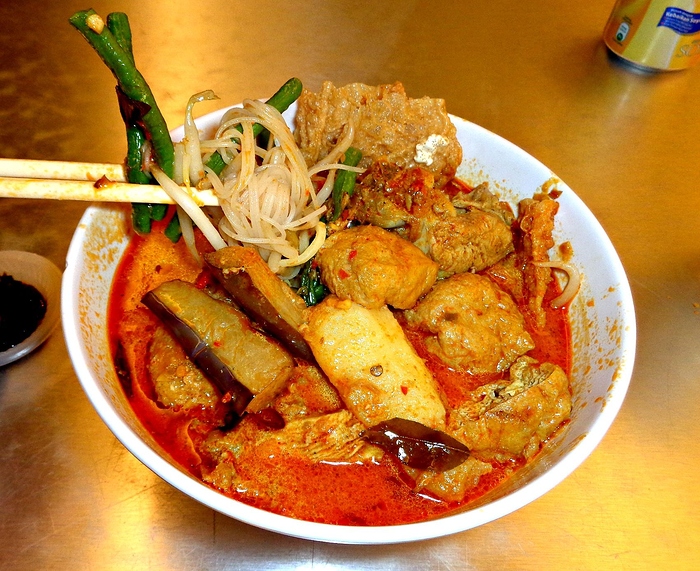 At the end of the day, tastes are pretty personal. People from different parts of Malaysia and Singapore will have their own personal preferences. I like all the regional variations, as much as I like Chiangmai’s khao soi.

I do like a curry mee. i was talking about it the other day when the missus was complaining about me buying tofu puffs and I explained that they were essential for curry mee (she still doesn’t like them but I still put them in). 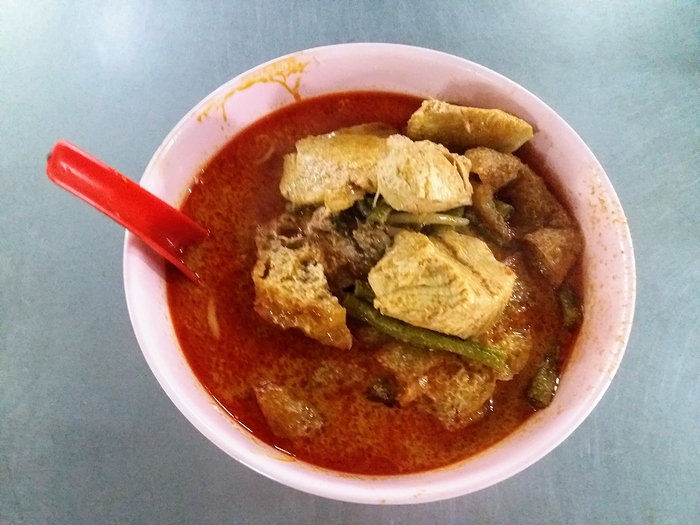 curry mee.jpg4128×3096 2.08 MB
My curry mee from Madras Lane in KL. On the sign it was down as curry laksa (the sign’s a bit blurry in the photo below ) I’m guessing that more tourists will have heard of laksa rather then curry mee. 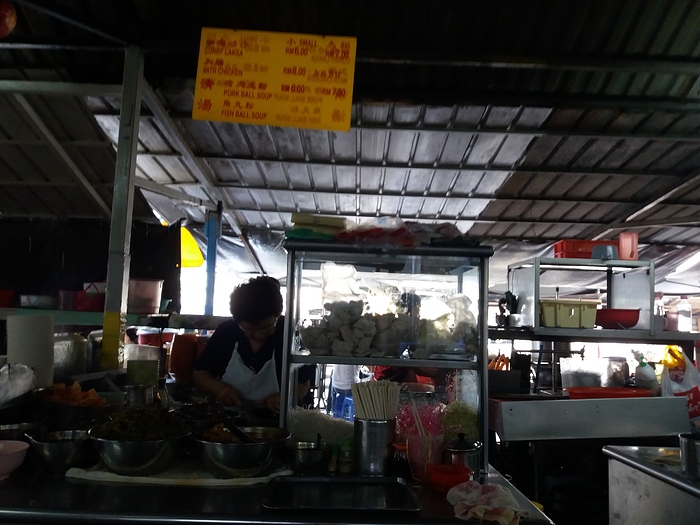 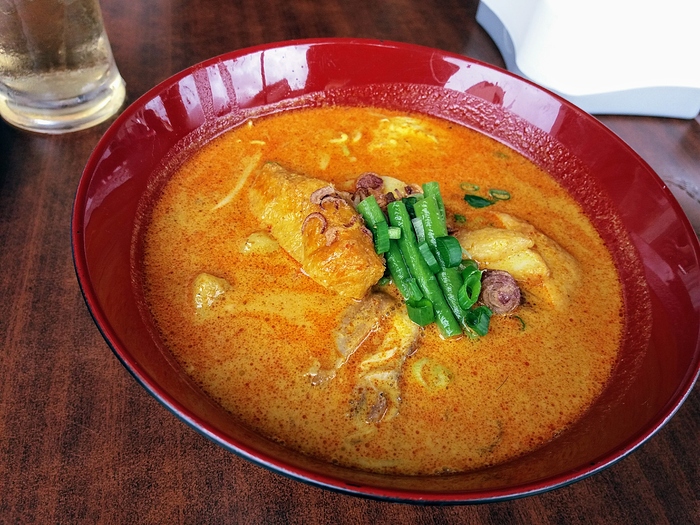 My curry mee from Madras Lane in KL. On the sign it was down as curry laksa (the sign’s a bit blurry in the photo below ) I’m guessing that more tourists will have heard of laksa rather then curry mee.

Yes, the Madras Lane folks used the term “curry laksa” - the line gets blurry as one moves between Malaysian states and cities, and Malaysian hawkers are as guilty as anyone else in misnaming their wares. But usually, one gets away with calling a dish “laksa” in West Malaysia when the noodle used is the thick rice noodles, which is invariably called “laksa noodles”, and which has the thickness of spaghettini.

But over in Sarawak (East Malaysia), their famous Sarawak laksa uses “beehoon” - thin rice noodles with the circumference of vermicelli. I remembered a Sarawakian friend in Singapore who cooked the Sarawak laksa and invited a bunch of us over for dinner. We were all perplexed then and a couple asked him, “You call this laksa?!”.

In Johore, the local Johore laksa used spaghetti pasta for noodles - a tradition started by the Anglophile Johore sultan Abu Bakar, who encountered the West’s answer to noodles during his trip to Europe in the 1860s.

Curry mee from Kuala Terengganu. Not sure if it’s a typical example from KT but it was very tasty.

The style of curry mee there is pretty similar to Kuala Lumpur’s (where they got the idea, I’m sure), and is very palatable to the local Malays, who make up 60-70% of its clientele. The proprietress is Chinese - a certain Madam Tan, who came to Kuantan from Taiping (a North-western town in Malaysia, with a food culture similar to Penang’s, actually) over 30 years ago. She’d not looked back since.

As always, thanks for the education, Peter.

Seconded, Peter contributes such a rich detail to his posts that brings context we couldn’t hope to find elsewhere. Thank you!

Most welcome, Lex & Harters. Nothing gives me more pleasure than to share whatever little I know.