Maison Nico is a newish French épicerie in the Financial District. They also have a stand in the Ferry Building farmers’ market. Some more info on them from Eater SF: 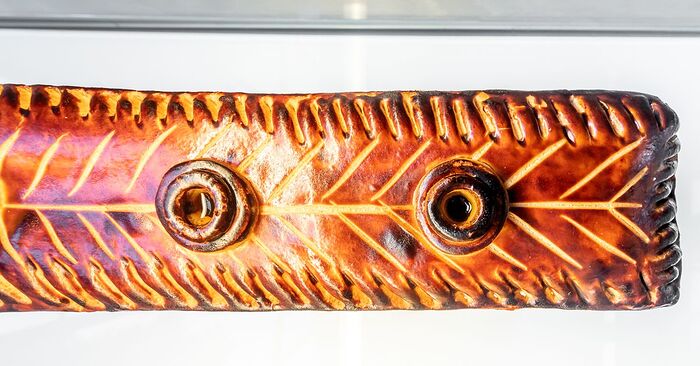 They have things like pâté en croute - pate enveloped in pastry, other savory items like terrines such as pork rillettes, some interesting looking molded jelly aspics with seafood, some very beautiful pastries, jarred preserves, wine and other provisions. Bit like a French deli. They also have coffee drinks and wine by the glass at their brick and mortar.

I got some items from here a couple times and ate them onsite. They have some little tables and chairs outside and recently opened their indoor tables for dining inside. Note that for the outdoors tables there’s no sun cover so maybe bring a hat!

I forget what this was called but it was like a cream puff. The pastry had a Dutch crunch like looking slightly crispy exterior and a delicious vanilla cream filling that I almost spilled on myself after biting into it. Very nice. 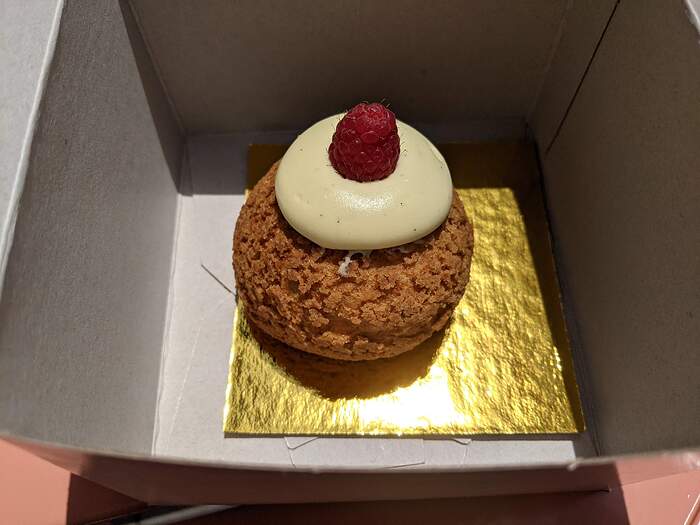 On another day I tried one of the pâtés en croute - the
Pâté en croûte de canard, pomme et
boudin (Duck, apple, and blood sausage) Nice duck meat interior with a savory blood pudding center, and some pine nuts for crunch. Don’t actually remember the apples. The crust of the pâté was a bit like a pie crust in texture, quite nice. I also had a slice of the Brioche Feuilletée (flaky, many-layered, caramelized brioche with almond paste) which was kind of like layered almond paste filled brioche formed into a loaf and covered with a caramel glazed exterior. Flaky layered buttery interior with a somewhat crispy caramel on the outside. The almond was quite subtle. This along with a glass of wine made for a nice lighter lunch. 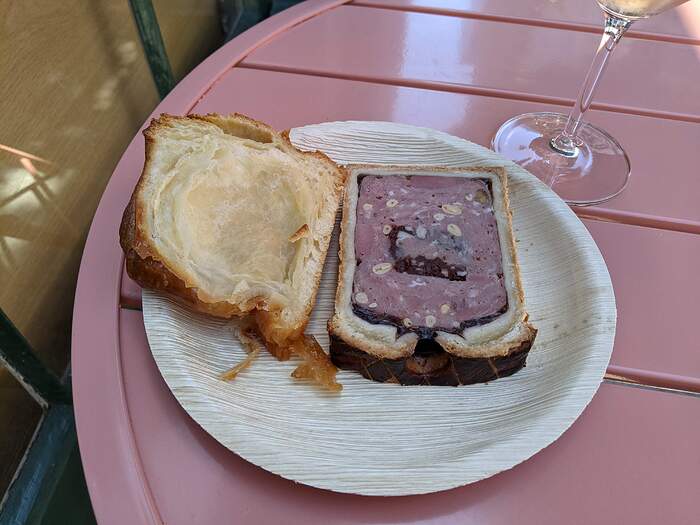 And on yet another day I tried the pâté en croûte de tomate farcie which was filled with pork with sun dried tomato, which was quite good, like a pork sausage with tomatoes enclosed in pie crust. This time they gave me some mustard and pickles to go with. Also I had a very impressive looking (and tasting) blueberry tart. A custard filled tart shell with a heaping mound (was about 2/3 of the tart as you can see) of lightly glazed blueberries and flower petals. 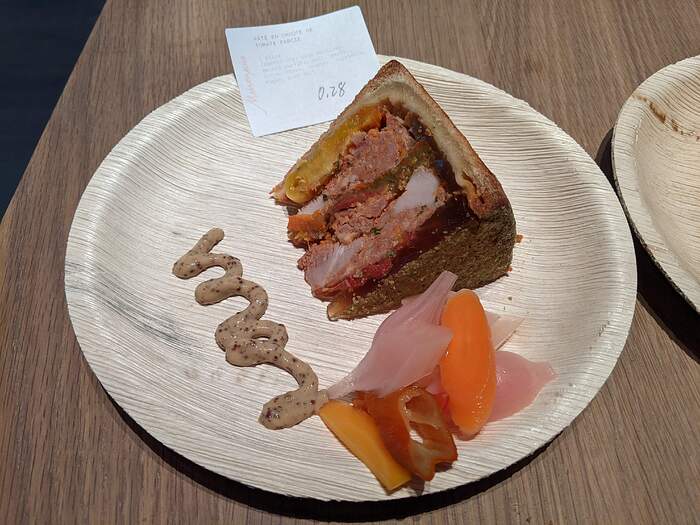 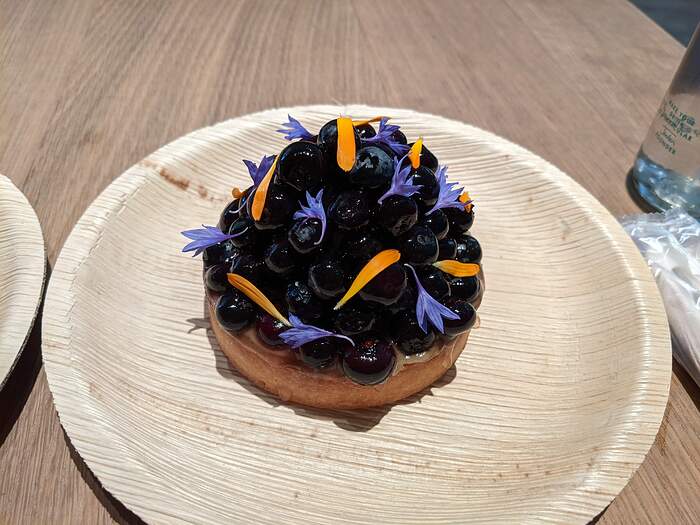 Also saw some more impressions in the takeout thread. 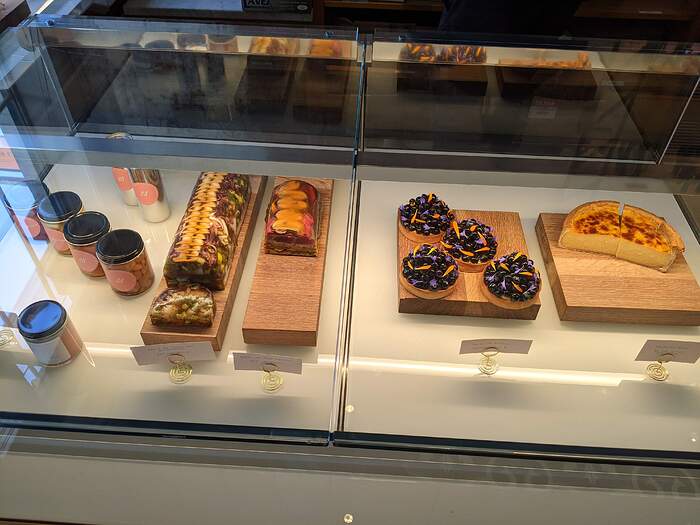 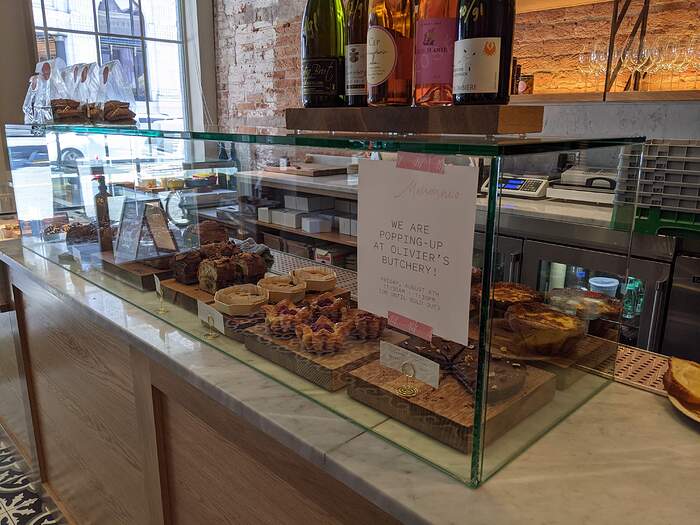 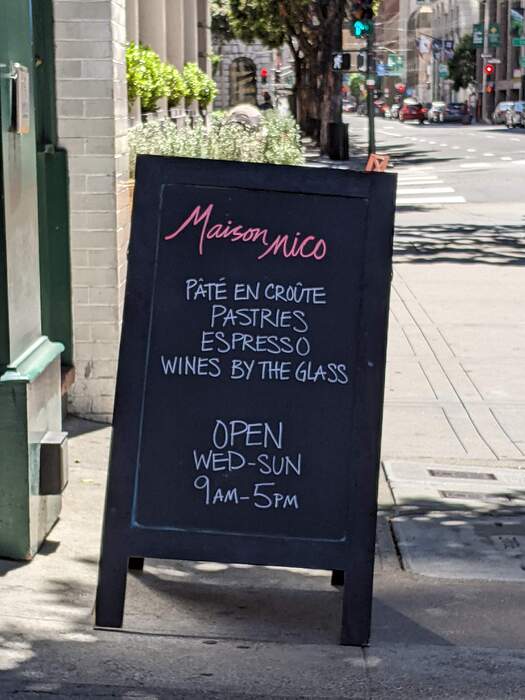 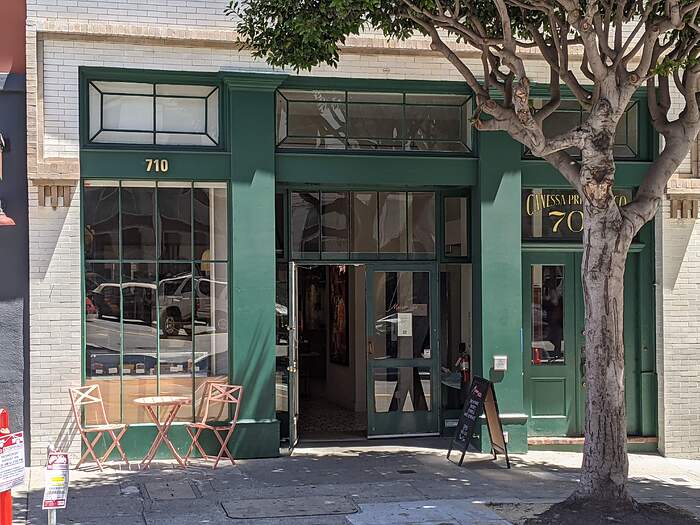 Beautiful! One of the few times I regret no longer working in The City, LOL.

Was at Maison Nico in March. Had to try their pate en croute. 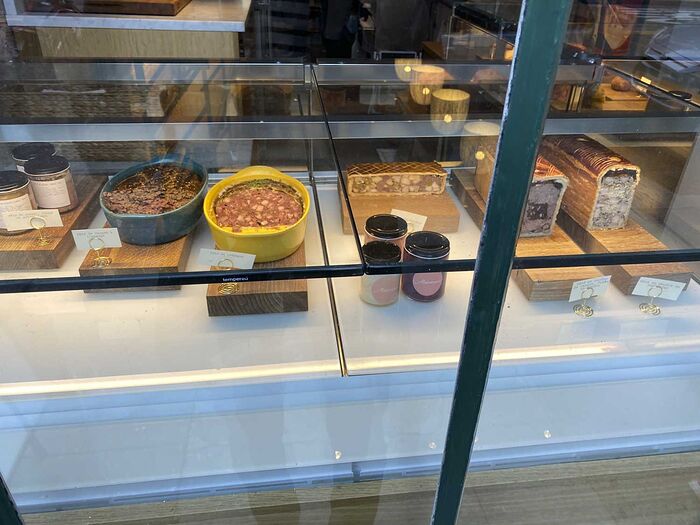 We got the pate en croute forestier, with the ingredients shown: 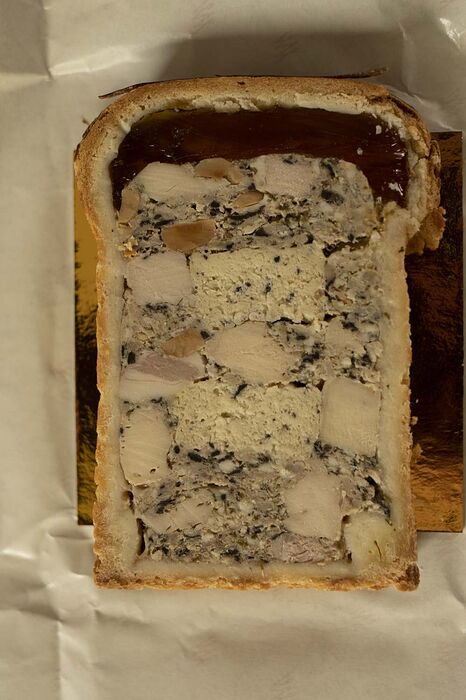 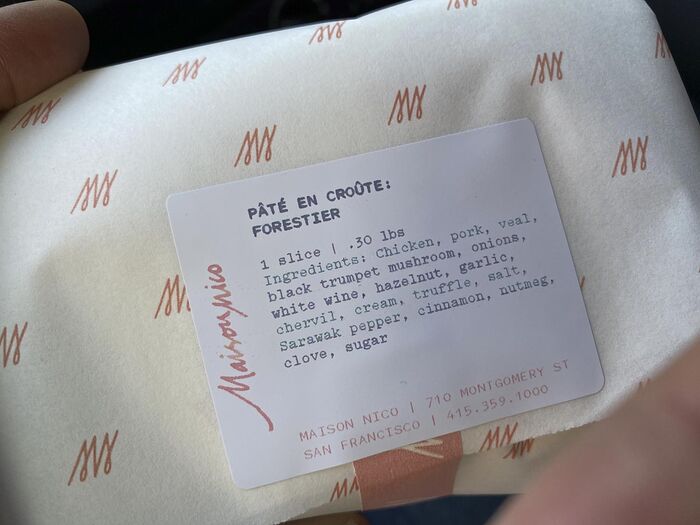 I think this was the fanciest pate I ever ate.

It was quite good, though it was also pricey

The hazelnut felt a little out of place.

Also got a few pastries: 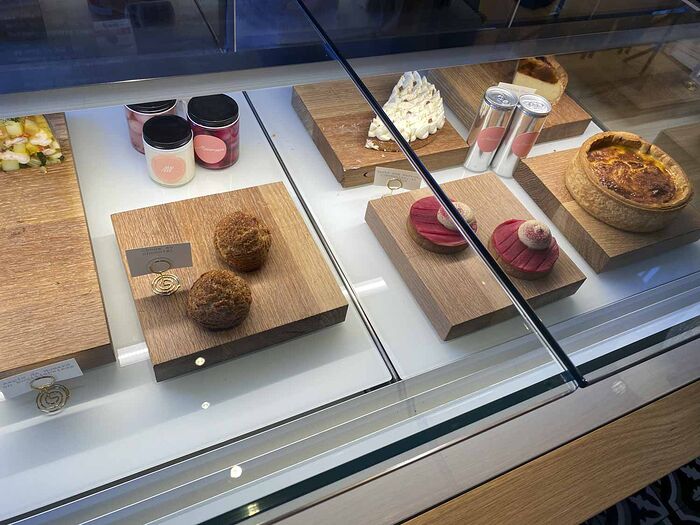 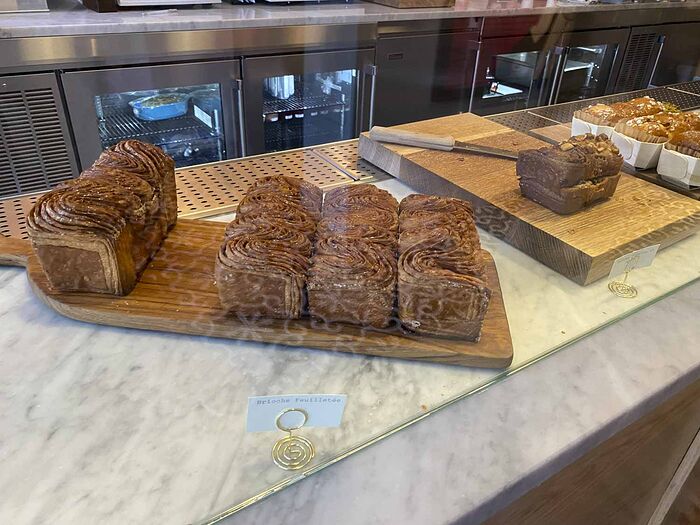 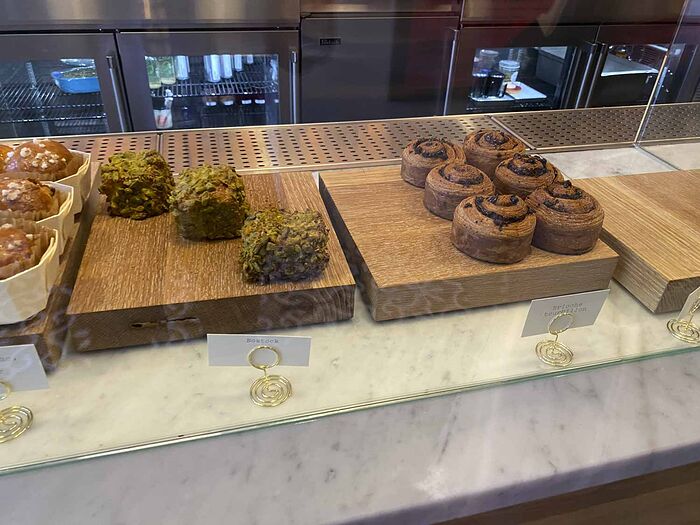 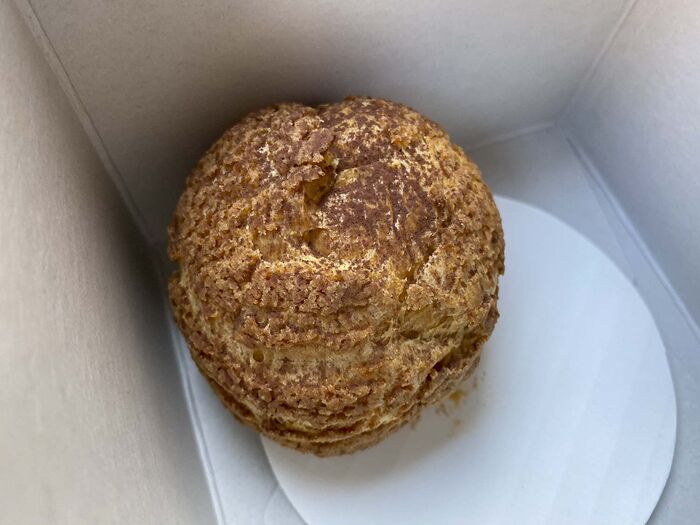 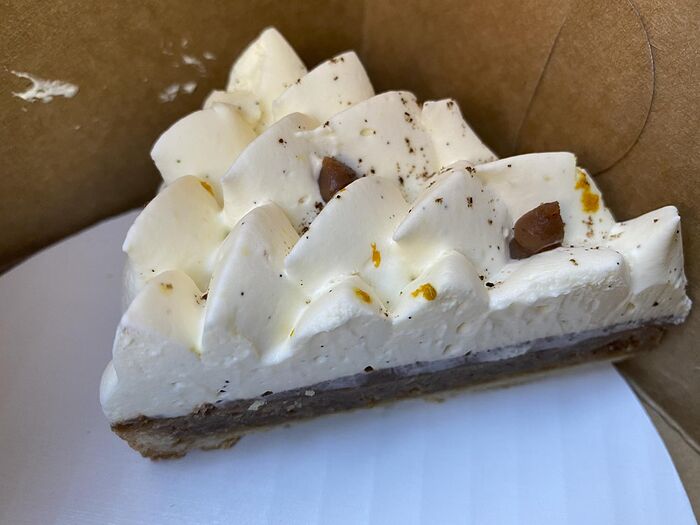 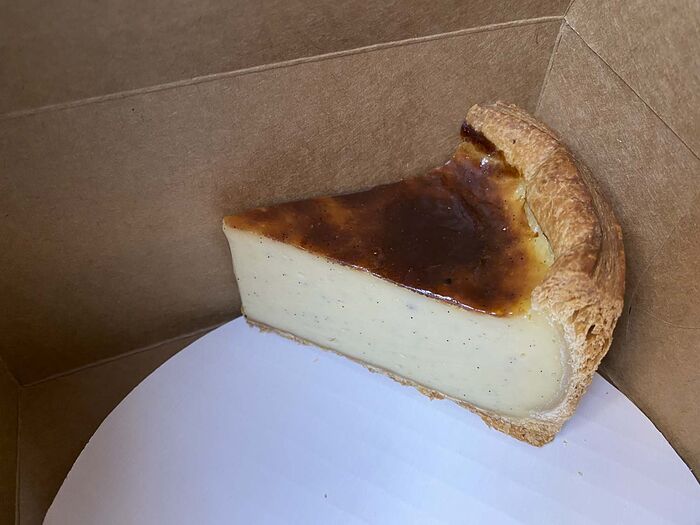 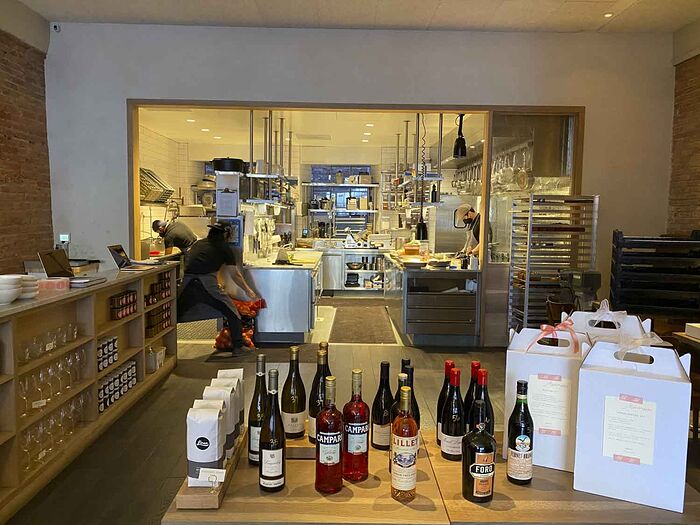 They were all pretty good, if a bit sweet, though the food and the place seems a bit too designed for Instagram…!

I’ve tried the flan, Brioche Feuilletée, and a choux - I feel like everything looks great / Instagram friendly but is a tad pricey/sweet. However, I still have not had any of the savory items.

It’s nice that you can get all these things in one place, but I’ve had better representations of everything elsewhere in SF (Flan at Arsicault, Dotori Choux from San Ho Won popup, Brioche Feuilletée - I’d rather have a Kouign Amann from Arsicault).

That’s pretty much it. By Instagram-y, I meant that they definitely got the looks nailed down, which the taste have a hard time matching. They are not bad. But we are definitely paying for financial district prices. But then again walking into the shop its like walking into a Tiffany’s store. So i guess that’s expected.

Definitely very `gram friendly, even the display cases look nice. Kind of reminded me of some of the pastry shops in Paris where the sweets look like jewellery on display. I got a similar vibe from ONE65 Patisserie near Union Square. Taste-wise I didn’t find the pastry to be overly sweet personally though I didn’t try the flan. Agree its on the pricier side.

It’s my sense that Nico has a Franco/European bent, ergo less sweet while high style.

Hey I’m not actually dead from Covid nor do I think I’ve gotten it, but have been mostly affected by it at work. Too busy to do anything. sigh.

At any rate, had a walk towards the area and discovered that Cafe Nico is right near the Transamerica building (or… the Scientology building if you care for that o_O). At any rate, saw that they had this awesome item! 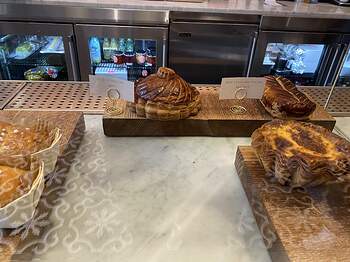 Duck pithivier! Only had a pithivier at Parthage in Las Vegas and was excited to try out Cafe Nico’s. 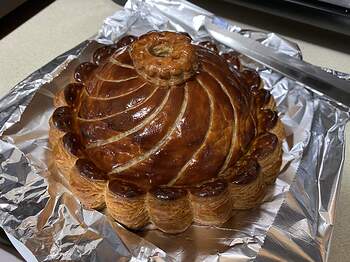 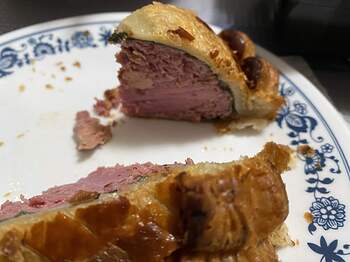 Honestly that thing is beautiful to look at as you guys have previously mentioned. The puff pastry crust was pretty crispy, and man they give a lot of duck. Seriously look at that thing, HUGE. A bit of pate (or foie gras? I’m sad to say its been a little while back) and they gave some nice au jus to serve it with . The au jus had a more sweet and tangy note (a little like worchetshire to me) but quite lovely.

A nice find for me but that thing isn’t cheap

How big is the pithivier?

It was fairly sizable, I think the plate’s like 7-9 inches or so…? the box that the pithivier came in was like a small cake box. Sadly I didn’t measure it

Hey I’m not actually dead from Covid nor do I think I’ve gotten it, but have been mostly affected by it at work. Too busy to do anything. sigh.

Ha, undead is still alive right…? Well the pithivier might keep you alive then kill you with a heart attack haha.

Was it good? How did it taste?

Maison Nico is good (and ya, expensive enough). Their Pâté en Croûtes are done well, very technically correct, with flavor to match. 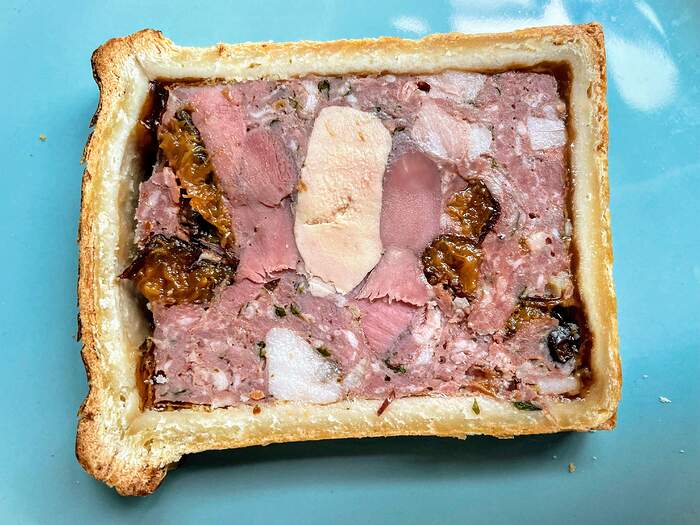 I’ve only tried a couple of the baked goods/pastries but their Brioche Feuilletée can be really good. I love the MUNI logo (I know): 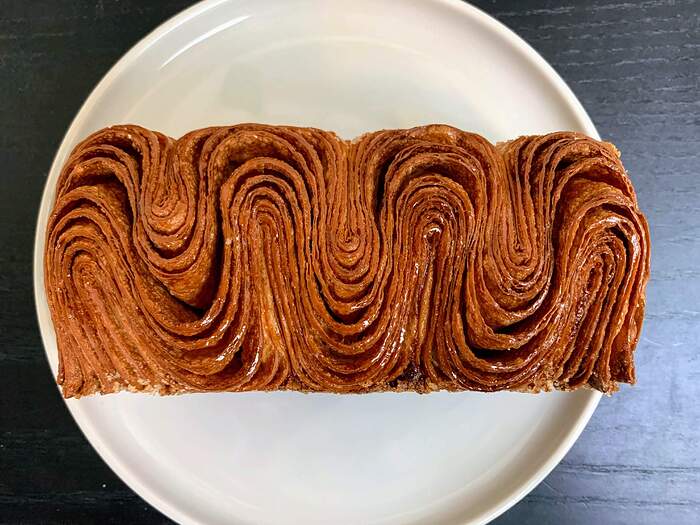 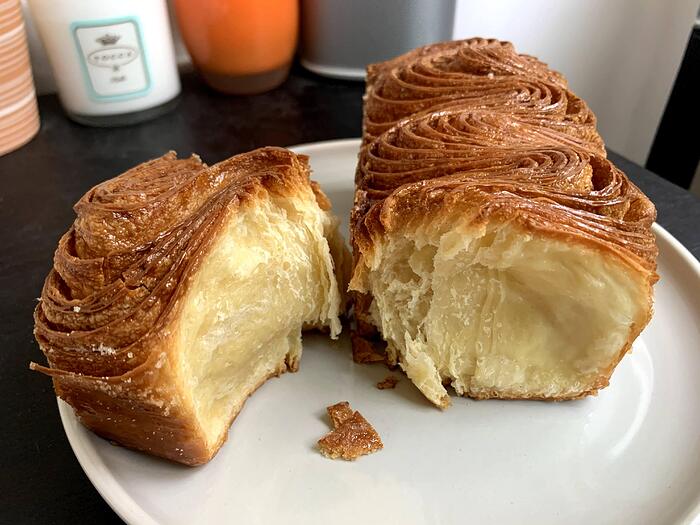 This is America, indulge! and… don’t look at the scale…

But I don’t know if they have it for slices. It was towards the end of the day and I just ordered it to go.

@Jiaozi I liked it quite a bit. I did warm the item though in an oven and didn’t want to burn anything so the duck was still on the cooler end, but I heated up the au jus and put it in the middle and it was pretty great. I don’t know if you’re suppose to eat it cold, but the pithivier I had in Vegas was served hot so I just went with hot.

Delicious stuff. Really enjoyed their venison pâté en croûte with pear, as well as the chicken and lobster Nantua version. So good with some Domaine Labet fleur de savagnin.

Sorry if it’s been discussed already, but it seems they’re closing temporarily and will reopen in the summer. Can’t wait to have their pâté again and trying their pithivier!