Lye is often used in Asia, especially in wonton noodle for the springy elastic feeling. It is also known as caustic soda, sodium hydroxide or food addictive E524 and an ingredient commonly used in cleaners or soap. Banned in Australia and New Zealand but permitted in the rest of the world. I read a baking recipe today asking for lye water. What is the use of it in baking? I’ve never seen it used in any French baking recipe. Is it necessary? How about the health aspect? Thanks in advance.

I read a baking recipe today asking for lye water. What is the use of it in baking?

I don’t know of lye as an ingredient, but it is used as a crust enhancer in bagel making. http://www.thefreshloaf.com/node/54197/bagels-lye-bath-method

DH is, at this moment, soaking fresh olives in a lye solution as part of the curing method. He will remove the lye by continuously leaching it in subsequent water baths until the olives are palatable. You know when there is still lye in the olives because they taste “soapy”.

Pretzels might get a lye bath, but if you don’t want to deal with caustic substances use baking soda instead.

@naf
One of my favorite Filipino snack is kutsinta. It usually comes in pair, size of a French macaron, puto ( white) and kutsinta( brown) . However, I tend to prefer kutsinta , both traditionally made with rice flour, in a small cup and steamed. Lye is alkaline giving Kutsinta a chewy texture. Served with freshly grated coconut, using a Filipino gadget, called "Kabayo"meaning horse, it is outstanding. .
Speaking of puto& kutsinta, the other favorite of mine is called Palitaw, even simpler than kutsinta. to make if I am allowed to give short recipe at this site. Please move or delete if you it if you wish. Just mix glutinous flour and water till it becomes a dough like consistency. Get 2 tablespoon of dough, roll it till it is round and flatten it with the palm of your hand, Dough is cooked in boiling water and when the dough floats to the surface, in a matter of a few minutes, it is done. Cooked a few at at time , do not crowd your pot. once cooked, it is rolled in brown muscavado sugar and then into a bowl of shredded fresh coconut. , then sprinkled in toasted sesame seeds. These desserts are typically served on banana leaves.
I lost my “horse” , thrown away by mistake by my worker. This is the best grater as the grated coconut comes out very light unlike those grated in a cuisinart or there food processor. Technique is to sit on the wooden horse, cut open a coconut in half, then grate it using an upward and downward stroke , the coconut to drop into the bowl underneath. If one becomes experience, it only takes minutes to grate a whole coconut. We often store the fresh coconut in its juice for use the following days in the fridge.Try the palitaw recipe with regular coconut and if. you like it, you can buy a grater without the horse, nail it to a home made horse. yourself like what we did. 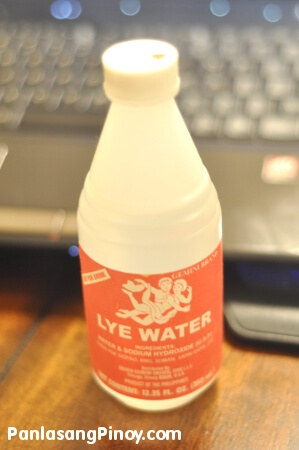 What is Lye Water?

What is Lye Water? Lye could come in different forms. Some are pellets, flakes or microbeads while there are others which come in powder or liquid form.

Thanks a lot for the recipes.

As for kutsinta, I’ve never tasted it, is it similar to the sticky rice dessert in Malaysia Chinese community? I thought it was the glutinous rice that gave that gummy feeling.

DH is, at this moment, soaking fresh olives in a lye solution as part of the curing method.

Was it to get rid of amertume?

@naf, re curing olives with lye

My mom used to always make zhong zi (glutinous rice dumplings) with lye water to make the plain, extra sticky dumpling that had no filling. She would dip this slight in sugar as a treat. Not my favorite…

Thanks for the article, I tried to cure olives once many years ago. But olive tree isn’t doing much these days, unlike in the past.

This is point about food grade lye is interesting.

But Hank, shouldn’t you use “food grade” lye? Well, after much research, I can find no hard evidence—none—that says there is any difference between so-called “food grade” lye and non-food grade lye. So, you can order the food grade stuff through that link above, or go to the hardware store and use a 100-percent sodium hydroxide drain cleaner. Both will work.

My mom used to always make zhong zi (glutinous rice dumplings) with lye water to make the plain, extra sticky dumpling that had no filling.

Not my favourite too. You mean those zhong zi with content inside do not use lye?

Correct. Regular zhong zi (I have no idea if I’m romanizing that correctly!) is just soaked glutinous rice with a bit of salt or other flavoring, and then the fillings.

The kind I’m referring to is the kind they actually call lye water zhong zi.

[https://thewoksoflife.com/alkaline-rice-dumplings-zongzi/]
The rice is soaked overnight with added lye water to make it stickier, and then some lye water added during cooking.

Bec the Fiipino recipe for puto and kutsinta use rice flour and not glutinous rice flour, lye is added for its chewy consistency. However, if you google, there are some cooks who says they do not use lye water but add other stuff like cassava flour and tapioca starch. I used to make cassava cake as gluten free for my husband but never use cassava as substitute for lye when making kutsinta…
Malaysian Chinese adopted this recipe from the Filipinos. The Chinese makes steamed rice cake very similar but the size is larger and sometimes they add food coloring to it whereas authentic puto and kutsinta are the size of a French macaron.
You are inventive and like to try new recipe, and so, I hope you can try Palitaw. Simple In the beginning, you do not have to use banana leaves for serving, and you can use coconut that is grated but if. you like Palitaw, by a grated and have hubby bang it into a wooden horse which makes it easier to grate1

I have been reading why lye is needed for making Chinese mooncakes since the crust is not crunchy. A Chinese chef Cheung Long-yin explained “it is not feasible to do traditional moon cake crust without lye water. First the moon cake crust will age easily, and the crust will crack. Secondly, the lye crust helps to maintain an oily appearance with the absorbed water and fat and without oil/fat leaking out. Finally it helps to obtain the right colour.” 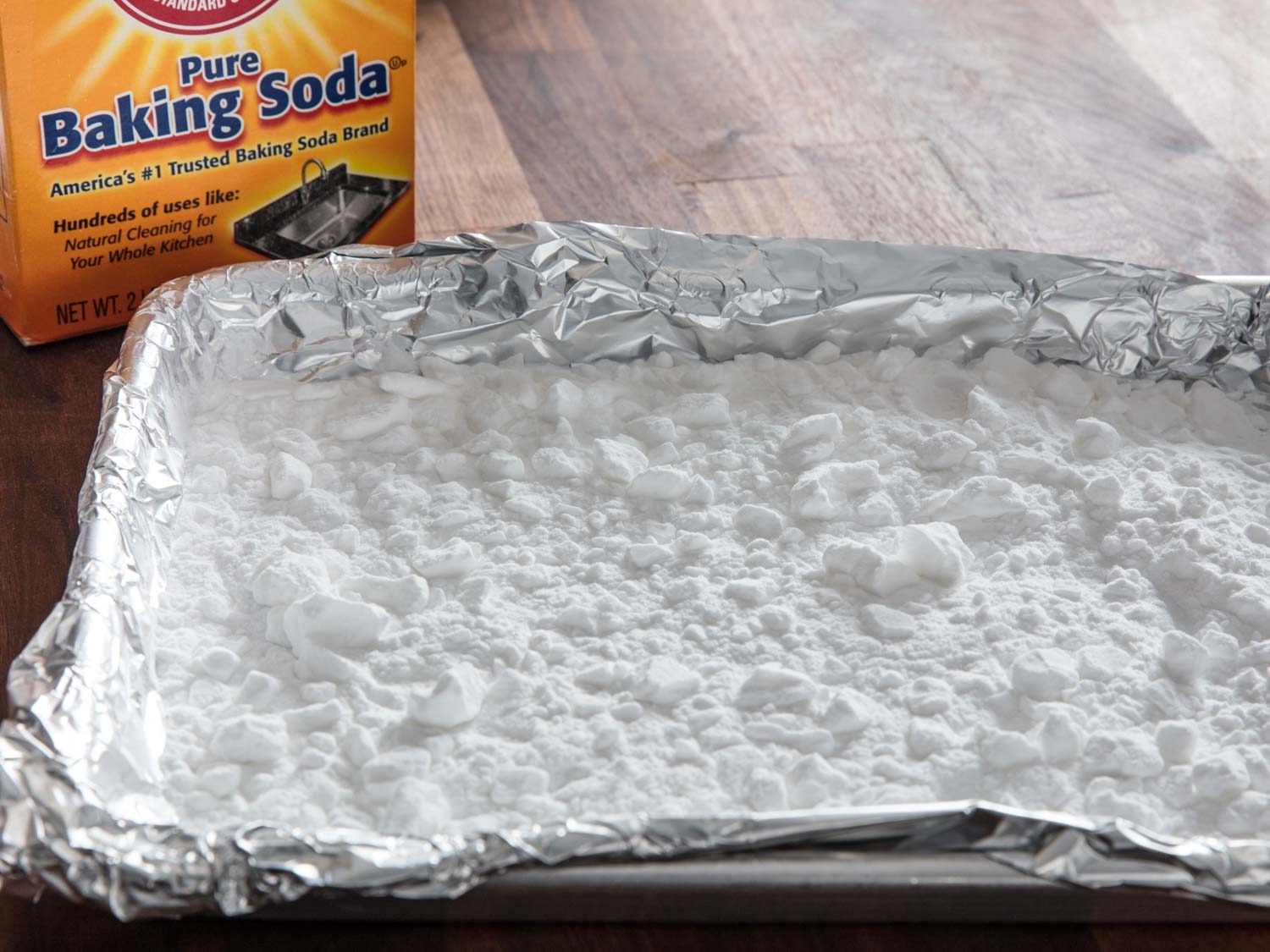 Great, I’ll try this! I just read the PH value between sodium carbonate and sodium hydroxide are close.

Agree it makes a big difference

(Note to self: read to the end of threads…)

Pretzels might get a lye bath, but if you don’t want to deal with caustic substances use baking soda instead.

Or the more effective compromise, DIY food-grade “washing soda” (sodium carbonate), which one can easily make by heating baking soda (sodium bicarbonate) in a a shallow layer in a low oven for a couple of hours. It’s significantly more basic than sodium bicarb, but not dangerously so like undiluted lye…