Square fish up in Your HEB @jcostiones! 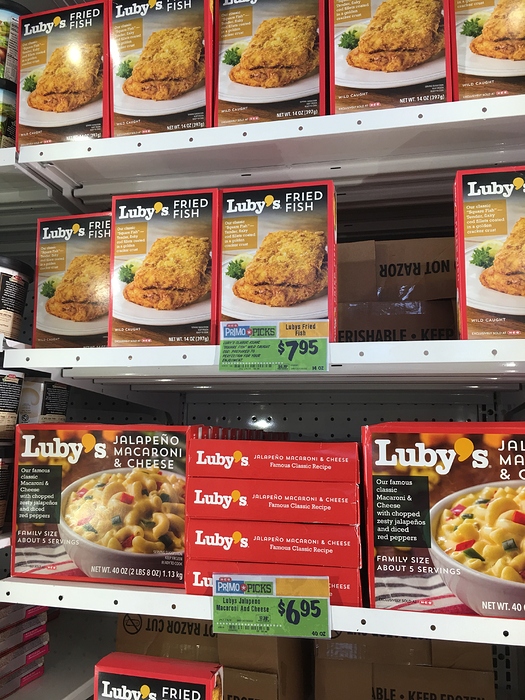 Where do they keep the tartar sauce?

I love me some Luby’s fish. I see a 7.95 price and what does that entail? Looks like I’m gonna take one for our team and try it out on Tuesday before it gets too hot for the big oven.

I don’t hit Luby’s very often anymore, but when I do I always order a tartar sauce with a square fish on the side.

I don’t hit Luby’s very often anymore, but when I do I always order a tartar sauce with a square fish on the side.

I’ll call your tartar sauce and fish and raise an extra piece plus mac and cheese.

I’ve been consuming copious quantities of fish since childhood when my Granny fried me red snapper and speckled trout. I’ve replicated her dish but have totally given up on her fried chicken, any for that matter. I buy, not fry my chicken.

Luby’s does a fine fried chicken breast with wing attached, crispy on the outside and juicy on the inside.

2 pieces per package, counted as 4 servings.

I’ll reserve judgement on portion size until my scheduled trial of the product on Tuesday.

I will say I have a small stash of Luby’s tartar sauce in my refrigerator after I braved 290/ W. Tidwell construction and scored a couple of hunks of fish with extra sauce from the drive-thru.

Luby’s was on their game as the fish was hot and fresh and as good as I’ve had there plus the tartar sauce was as advertised.

It’s going to be tough for HEB to match this and I’m not holding my breath.

I eagerly await your expert assessment.

I actually bought this and the jalapeño mac & cheese, good to know.

I’d be more than happy to sell you some tartar sauce.

I’ll make some! Don’t want to deplete your stash!

I’ll make some! Don’t want to deplete your stash!

It’s going to be tough for HEB to match this and I’m not holding my breath.

extra sauce from the drive-thru.

I haven’t see a Luby’s with a drive through! You have to go in a separate door for take out and there’s never anyone there. Drive through sounds more workable.

The same people that work the drive-thru work the to go and there can be a bit of a wait although I was in and out in less than 5 minutes on Saturday, could be nobody goes near due to road destruction. There’s also a drive-thru on Fondren just south of Westheimer.

Tomorrow’s the big day as I got me a box of fish, only two left and one damaged, to be paired with Kraft blue box mac n cheese not wanting to shell out the big bucks for Luby’s, waiting for your review of the mac.

Massive brainstorming revealed the 1/2 piece serving as that’s the size on a Lu-Ann platter.

I ate two whole on Saturday.

So there are two pieces in each box?

I’d rather just go to Luby’s and get the tartar sauce to go with.

Four pieces per box. That’s amazing they already sold out!

Yep two pieces which is my standard order, maybe 1 and 1/2. The price point works out to about 1/2 price the original. We’ll find out the quality of the fish tomorrow and if it’s not good I’ll have extra tartar sauce on sale starting at 10 bucks a container available for a meet at any taco truck in Spring Branch.

Four pieces per box. That’s amazing they already sold out!

Edited to add: If anyone not in Texas is wondering what’s going on here, Luby’s is an old style cafeteria and JC and I share a common love for their tartar sauce that comes with the fish dishes, in particular the square crispy breaded fried white filet. It’s rectangular about 3" X 4" by 1". They have now started selling the fish fillets in the frozen foods section of a local grocery chain, HEB.

The LuAnn Platter is a “plate lunch combo” sold at Luby’s with a half portion entree and two sides and a bread. Dessert is extra. There’s a reference to mac 'n cheese upthread - always a good choice.

Lastly, if “LuAnn Platter” sounds familiar, it’s the name of Hank Hill’s niece on King of the Hill. It was the show’s creator, Mike Judge’s nod to the venerable cafeteria chain.

All I got. Gotta go help the Astros get back on track.