I blame the Food Channel - it showed a documentary on Sydney’s Harry’s Cafe de Wheels and its saliva-inducing Tiger Pie, a meat pie topped with mushy peas & gravy. I’d been to this Sydney dining icon on Woolloomooloo, formerly a wharf but gentrified beyond recognition in the past couple of decades. Now I suddenly developed a yearning for the Tiger Pie, but Sydney is 17,000km away!

The next best option? Go to local chippy, Rock & Sole Plaice, order the components and construct a Tiger pie oneself. We’re paying London prices here: a beef and onion pie costs £7.50, mushy peas are £2 and gravy £1.50 (!!). 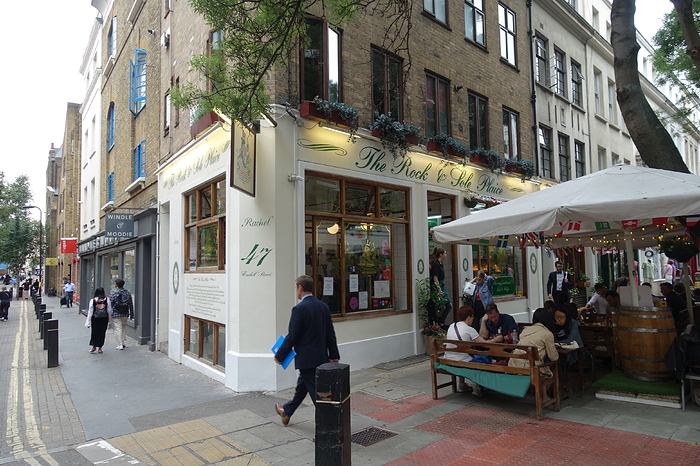 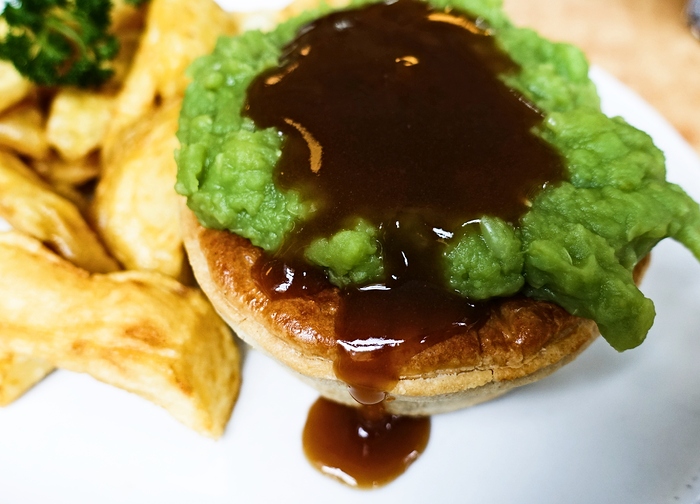 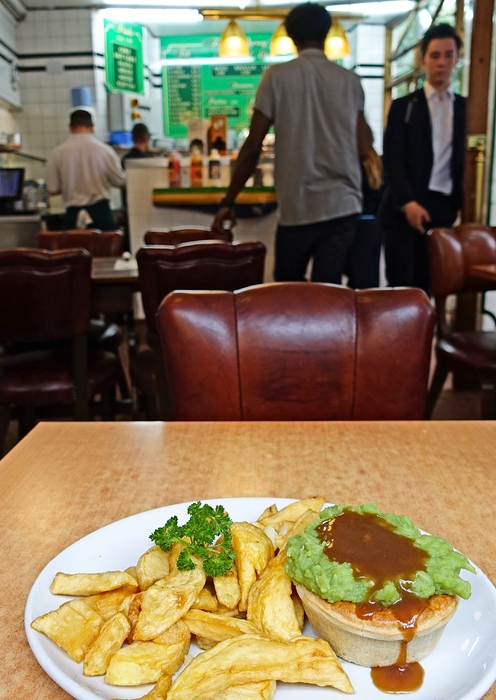 BTW, Rock & Sole Plaice also does a fried Camembert & cranberry jam (£5) starter - not a good rendition at all, but still something which I love to have. 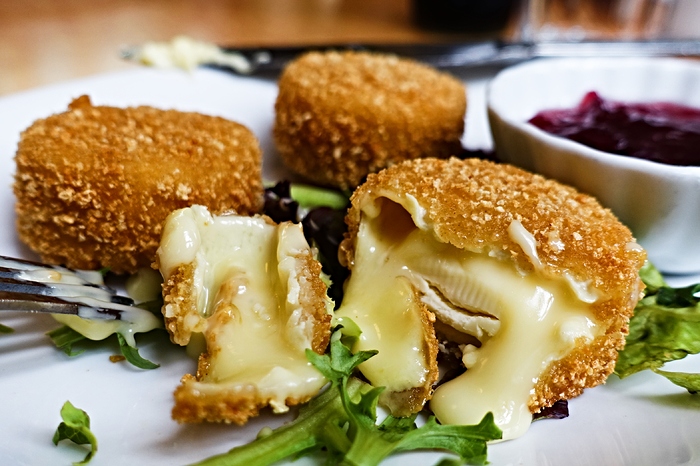 Tourists flock here for the fish and chips - pretty expensive as we’re in the tourist belt. Cod, plaice or haddock costs £14.50 for a regular piece and £17.50 for large. The chips that came with the fish were, honestly, pretty awful: chunky and soggy eventhough the well-staffed serving counters seemed to be turning those out a la minute. 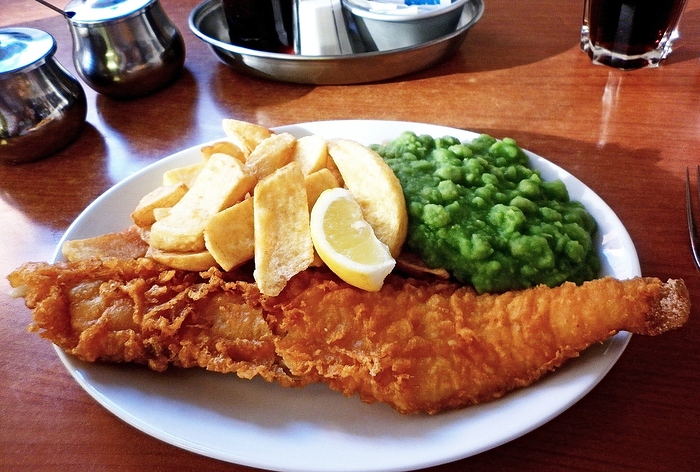 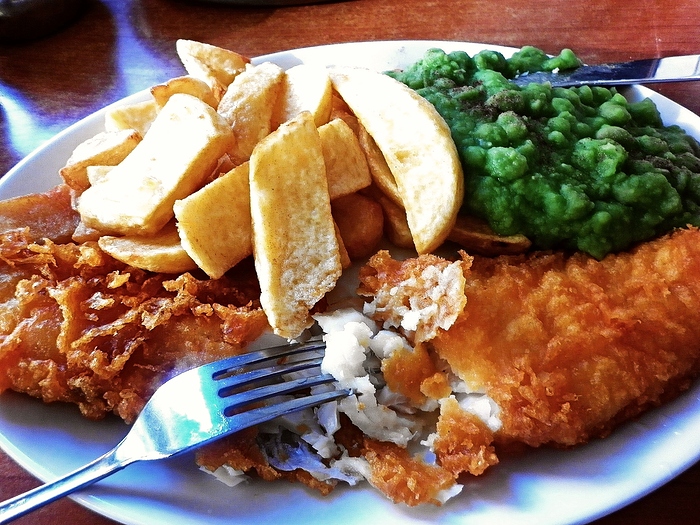 The place is purportedly 147-years-old now. What gives? Anyway, its central location and proximity to the West End theatres doubtlessly work in its favour. Plus its very casual ambience and long operating hours - it’s one of those places where one feels that one can conveniently drop in at any time. 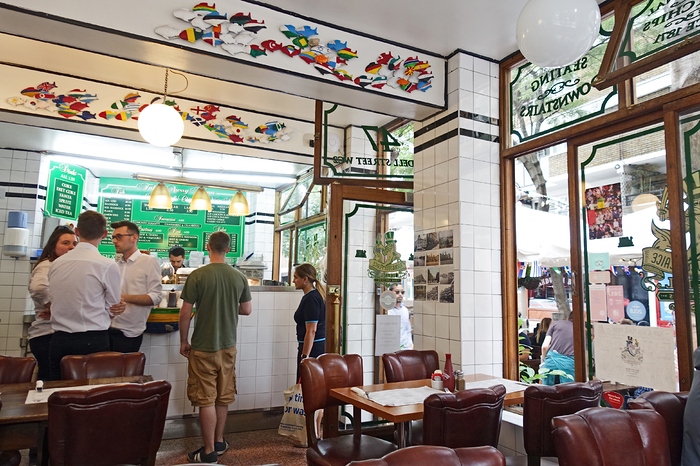 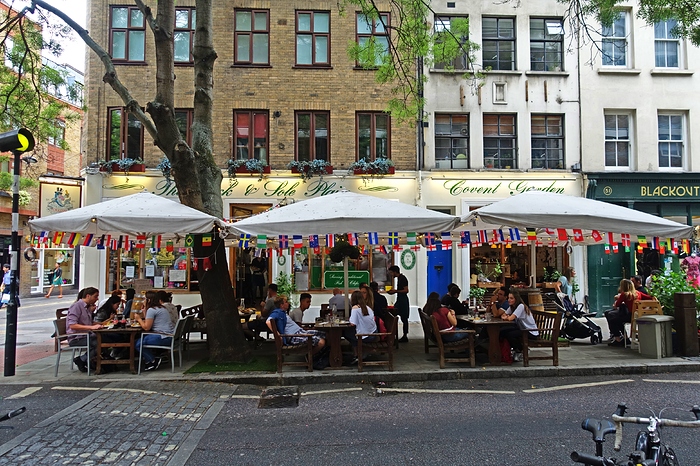 Know what you mean. Other than the catchy name . . .

The place is purportedly 147-years-old

I hope the plaice isn’t that old!

I visited many years ago and wasn’t impressed. But I guess they have a captive tourist market on their doorstep, so can rely on that.

For a much better option, I’d recommend Poppies:

Poppies, owned by 77-year-old Pat “Pop” Newland, was just opened in 2010 but exudes a retro 50s vibe and feel - not just in terms of decor, but also in the attitude of the genial staff in there. Pat Newland himself started off in the fish-and-chips trade since he was eleven, and he carries his tremendous experience, as well as his East End connections over to this new venture which he started on the cusp of his 70th birthday. Like they say, it’s never too late. [DSC00118] [DSC00127] What I …

My one and definitely only visit was back in 2008, when I posted this review on Chowhound.

On the other hand, Masters Superfish, near Victoria, is so good it could be northern.

So, @Harters, it was already that way 10 years ago! But it’s doing well relative to the places down at Soho - Hoppers, the current darling of Frith Street occupied the old location of Roka, whilst next door, I remembered dining at @Siam Thai restaurant. Here today, gone the next.

I went there with visitors once on their insistence. To be honest, that day it wasn’t that bad. I remain sad that these particular visitors have yet to experience a really local fish and chips and only these sorts of tourist-trap places to think about. One day…! Those prices! But, seriously, pie with gravy!!! I’m envious.