Poppies, owned by 77-year-old Pat “Pop” Newland, was just opened in 2010 but exudes a retro 50s vibe and feel - not just in terms of decor, but also in the attitude of the genial staff in there. Pat Newland himself started off in the fish-and-chips trade since he was eleven, and he carries his tremendous experience, as well as his East End connections over to this new venture which he started on the cusp of his 70th birthday. Like they say, it’s never too late. 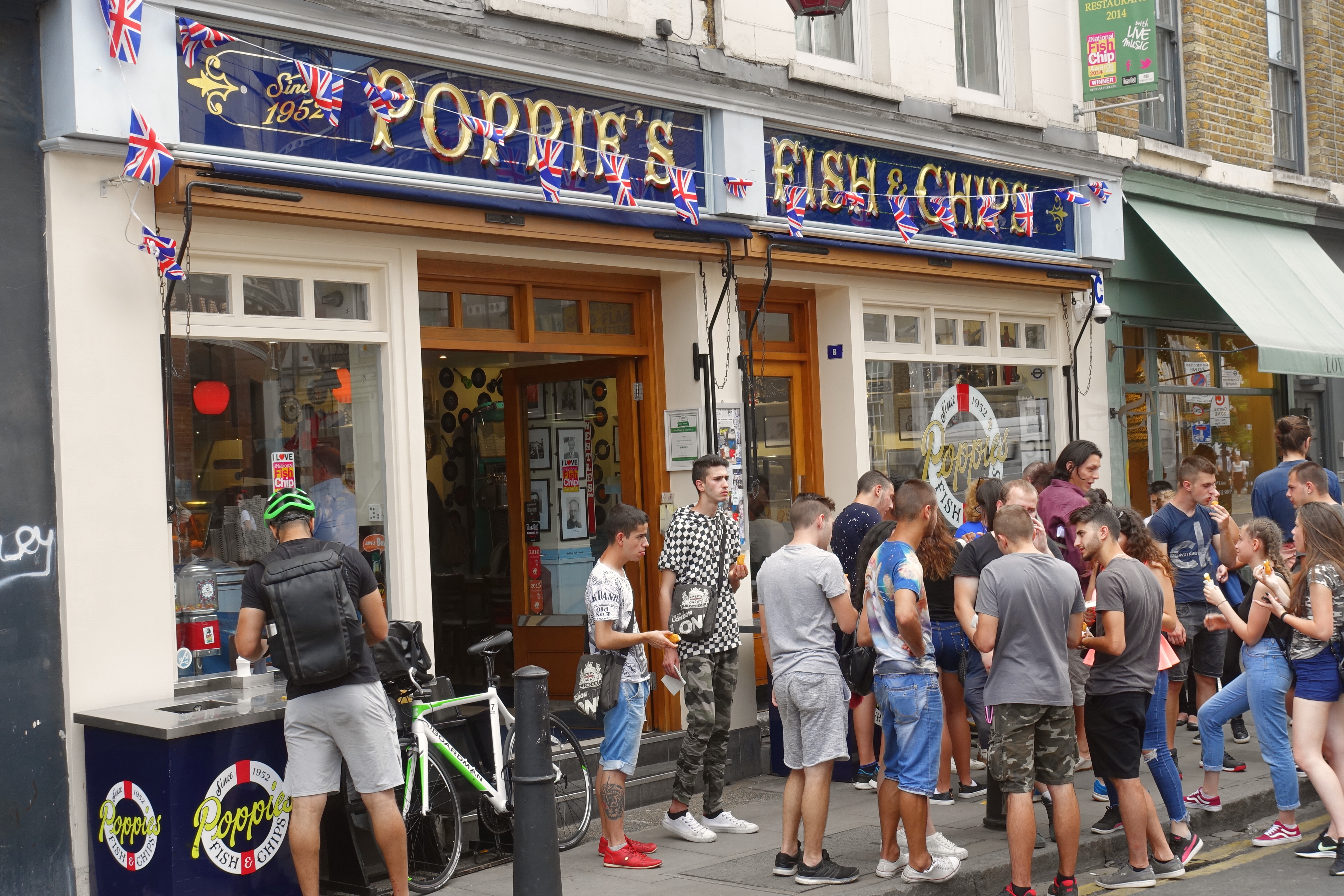 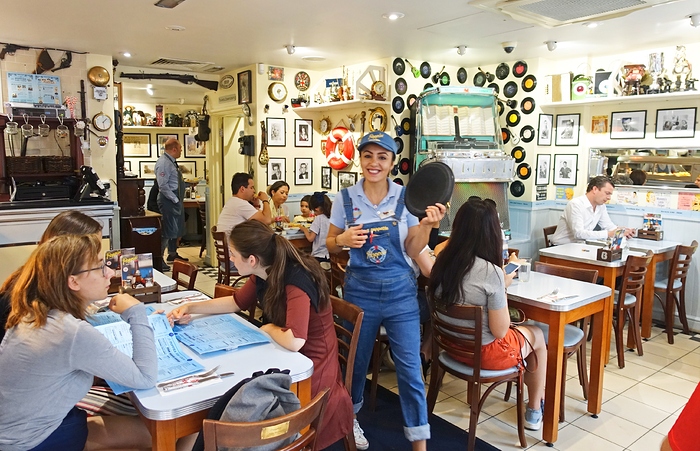 What I had:
Cod and chips - fresh fillets with golden-crisp batter. Chips were tasty. I have them with a liberal sprinkling of malt vinegar (a habit acquired during my student days back in Australia). 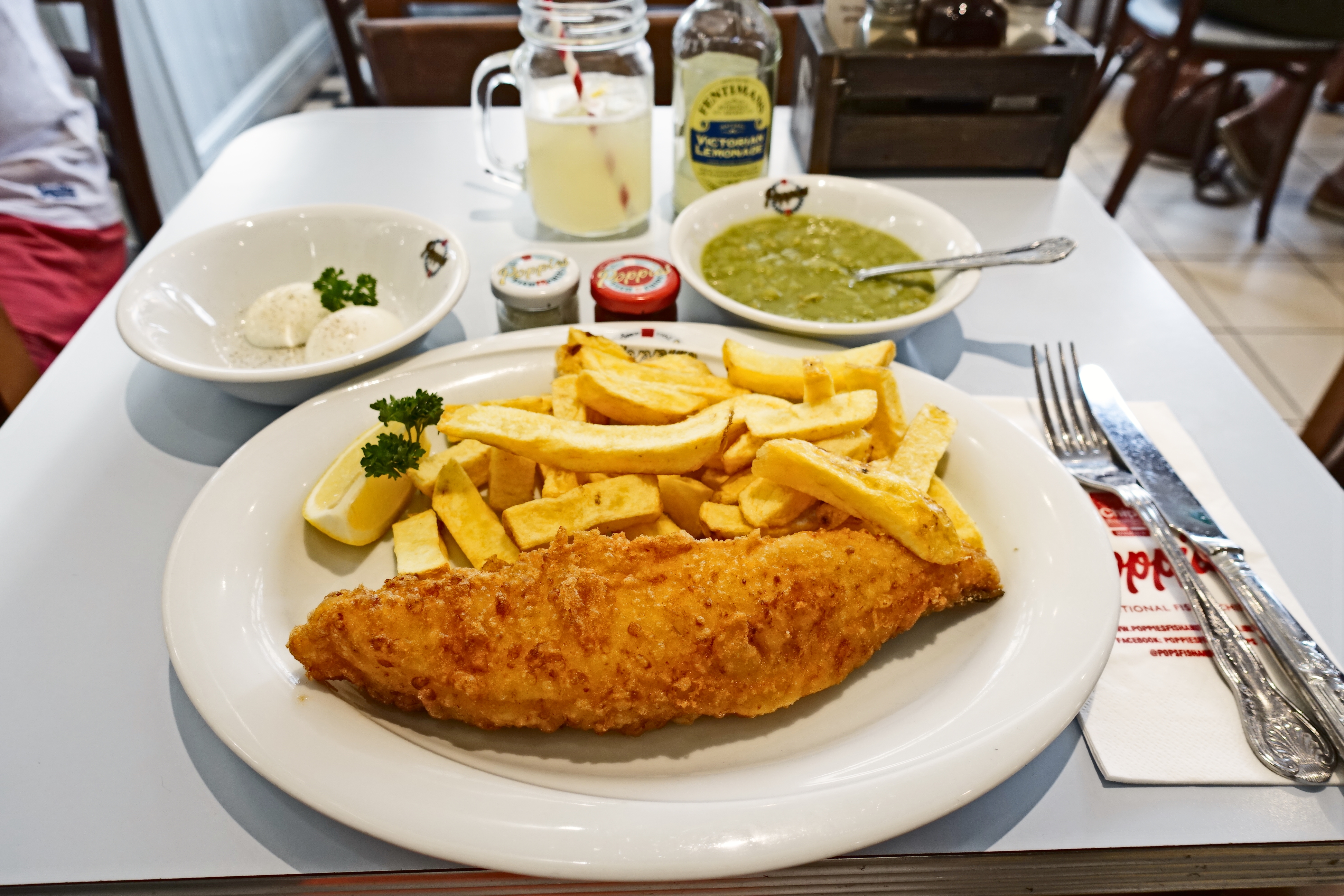 Mushy peas is a must for me, and pickled egg, which I’d take with a generous dash of black pepper. 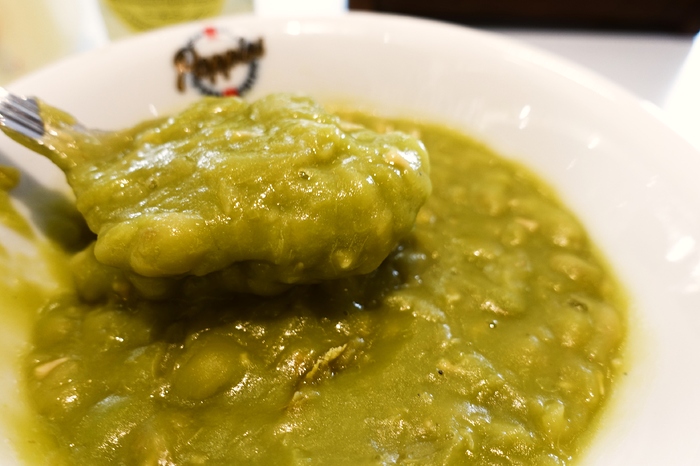 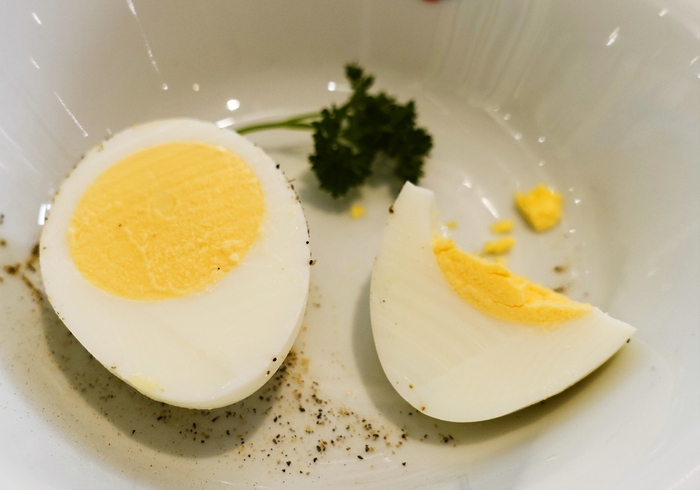 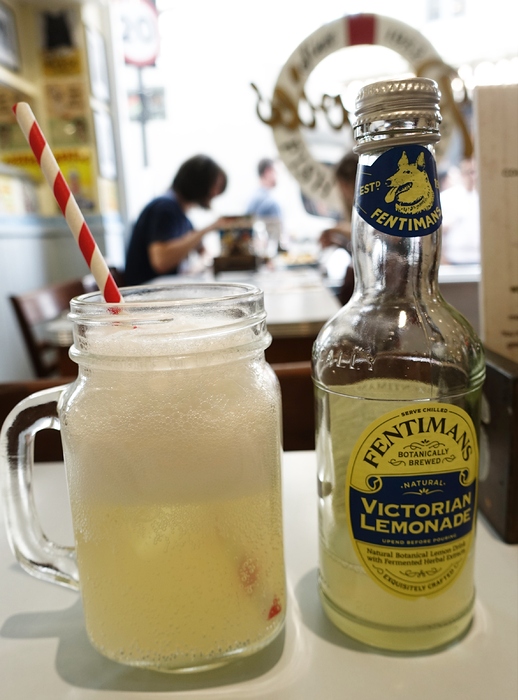 Poppies certainly serves one of the best in town, no doubt about that. 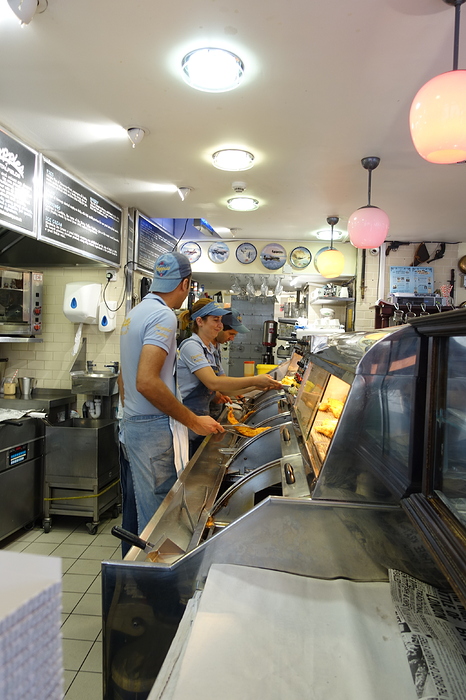 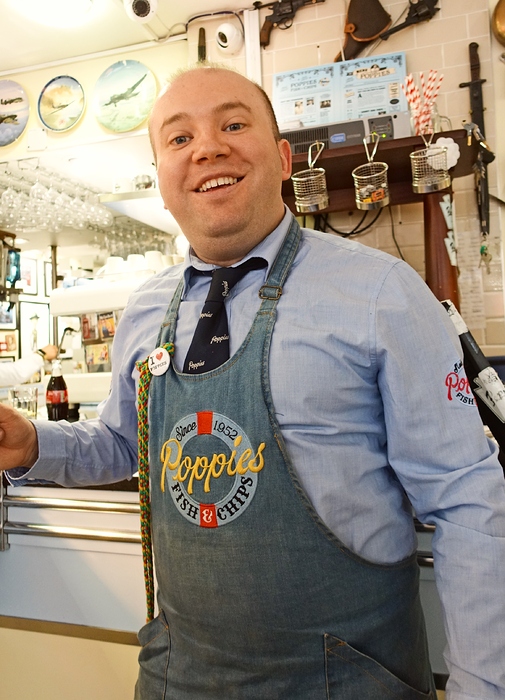 Glad you had a good experience, Peter. I went there with a friend in April and wasn’t so happy. I had had takeaway chips once from there and was pleased with it but that day it was disappointing. We didn’t want a full meal so instead ordered the calamari - not tender enough - and chips, which were properly cooked but lacked any flavour except for the salt and vinegar I put on them. I suppose better luck for me next time! Agreed, though, that the service was good especially considering the small order we put in between us! It does cement for me that a local chippie is almost always more satisfying than a more central and commercial one. Thoughts?

It does cement for me that a local chippie is almost always more satisfying than a more central and commercial one. Thoughts?

I usually try to avoid chain restaurants, where possible. But then, I’d also experienced an awful fish and chips meal at one of Brighton’s oldest chippies back in 1993/94 - can’t exactly place the year anymore. And I’d have thought one can get a good one there.

We tend to shy away from chains as well, especially in a foreign destination. Poppies has an American diner feel, good food at a fair price.

Some pics from our June visit. 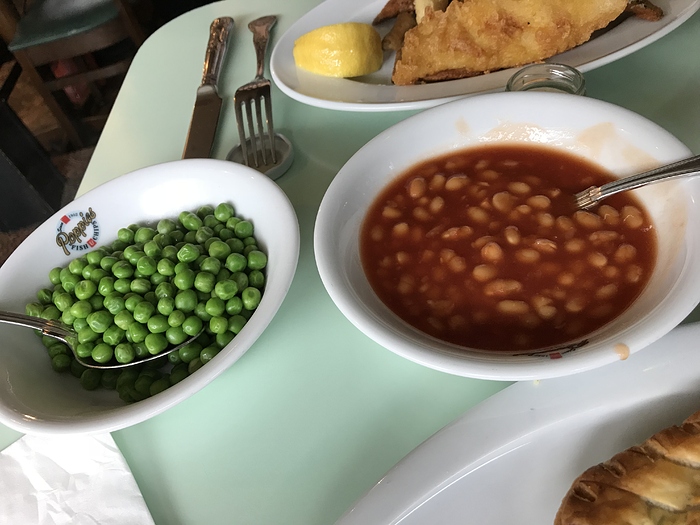 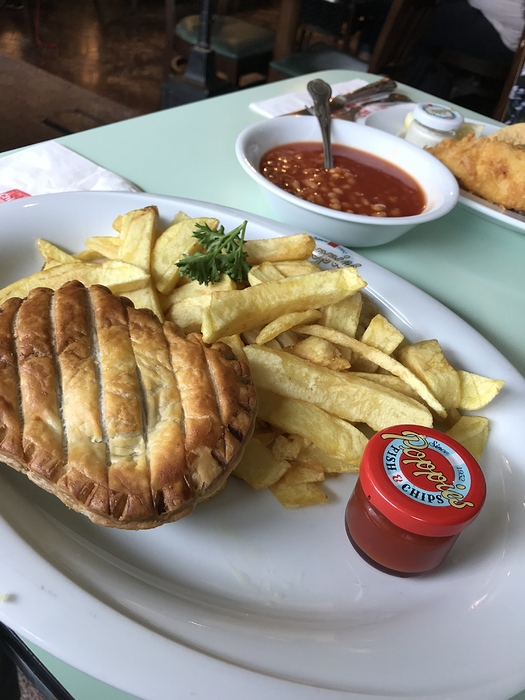 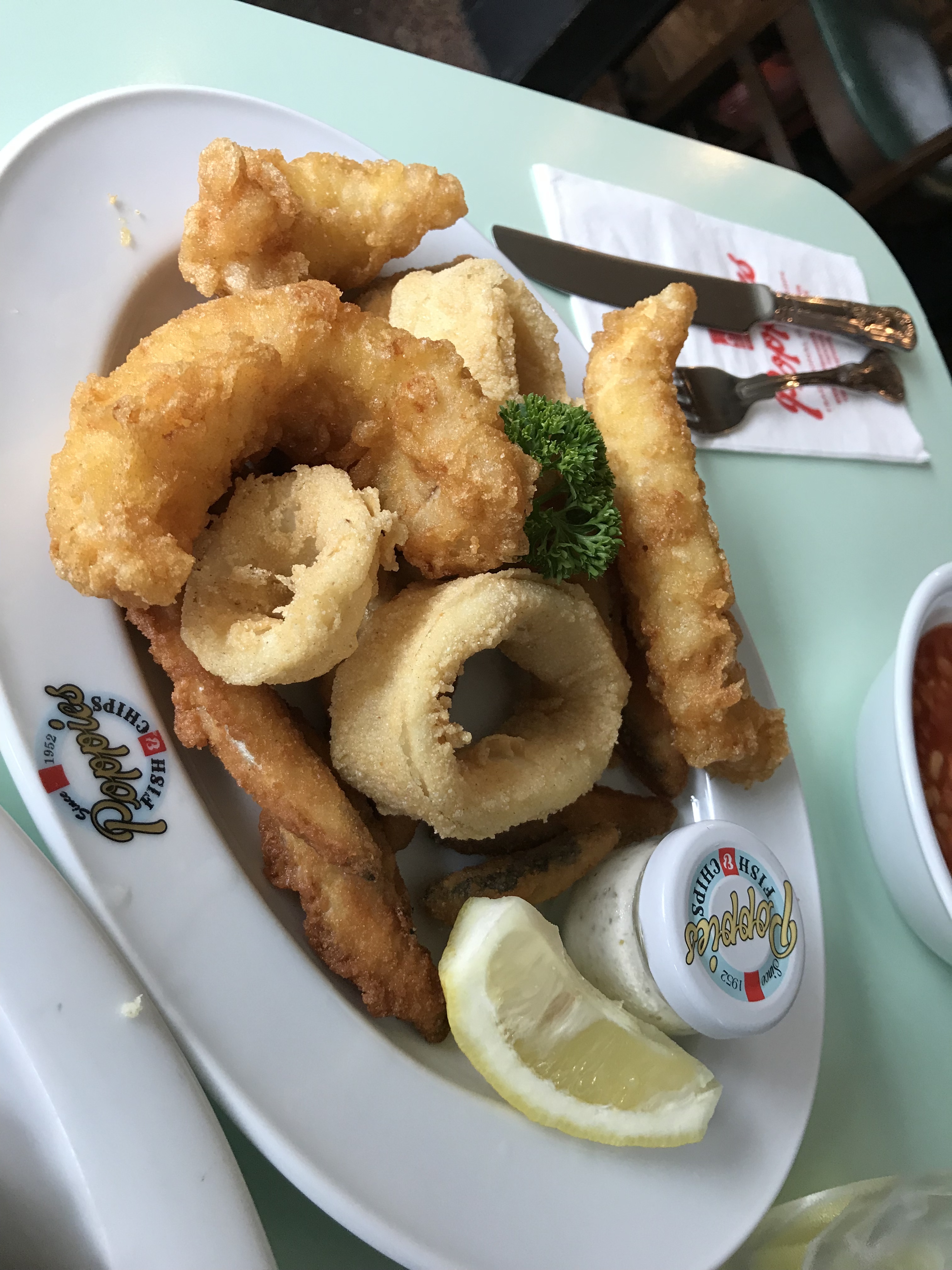 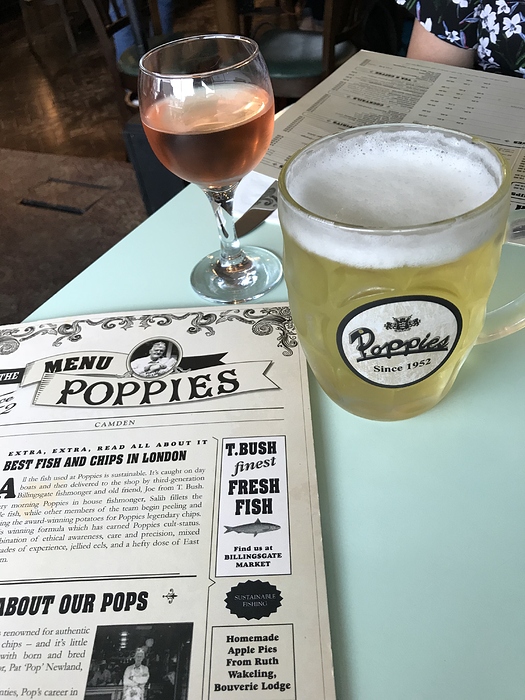 I was tickled to see their Crapper in the WC. Wonder if it’s a genuine, or a period reproduction?? 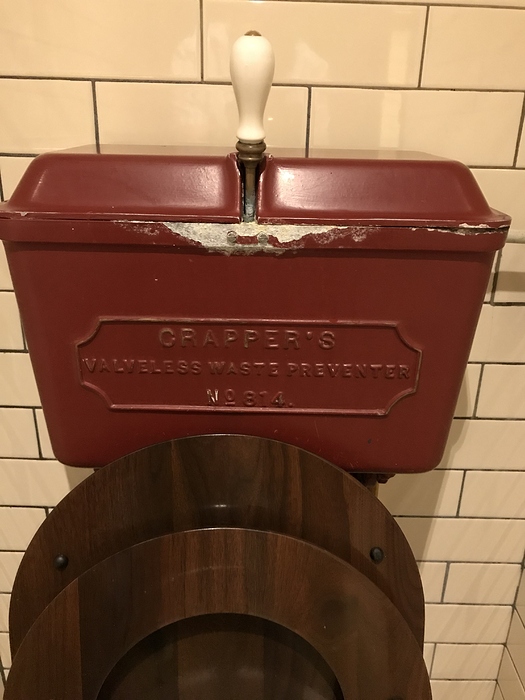 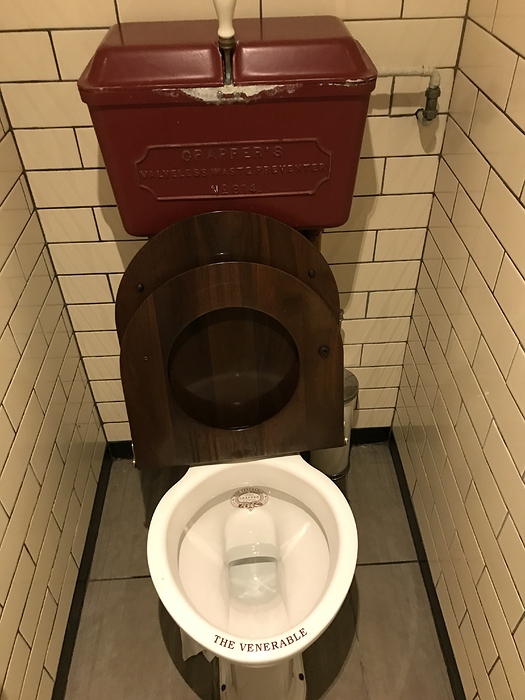 It’s a sad reflection on what I suppose is our national dish that, so often, it will be very, very mediocre. So often, they will have batch fried the fish, keeping it warm on a steamer shelf which means that, unless it’s sold very quickly, the batter will lose its crispness. The trick, which is not guaranteed to work, is to know which fish is the popular one in the area - cod or haddock - and then order the other one. It should mean it’s freshly cooked.

Maybe the same place, Peter, but I also had an awful chippy lunch in Brighton. It was back in the days when I posted on egullet and soemone had recommended the chippy on the pier. But that was closed the day I went , so I went to somewhere just near the pier. Horrible, by any standard.

And here we were - actually thinking that it’ll be virtually impossible to have bad fish-and-chips in Brighton.

Incredibly easy unfortunately to have bad fish and chips in Brighton. I have to say, my local chippie is a bit of a guilty pleasure - much, much cheaper than Poppies, though probably inferior mushy peas! Fish is always crispy and tastes fresh but I find it so difficult to get decent F&C in London now without spending ££££ which really puts me off.

hmmm where’s your local? best i’ve had is near my aunt , who demands we bring an order to her on every visit - it’s the fish inn at leigh on sea. enormous, lightly battered, and served cheerfully!