My last one of these was for June/July, so here’s a summary of the interesting things I ate in London in August. Would love to see others’ additions to this!

This is really a wine bar, part of a chain with a somewhat cringe-worthy name, but their tomato bruschetta (photo) was really good. The tomatoes were properly flavourful, with just the right amount of firmness, and seasoned perfectly. The bread was good too, with a dense, chewy crust. I insisted on a second round.

I have mentioned the Croydon branch of Saravanaa Bhavan before, in the context of their idli not being worth travelling for. Their utthappam and dosas, on the other hand, are perfectly competent, and their sambar and tomato chutney are well above average. I drop in here so often now that I don’t bother taking photos every time, so I can’t show you what the dosa I ate last month looked like. But I can tell you that the sambar and tomato chutney were well up to their usual standards, and the green chilli chutney was a level above all my previous experiences of it, with a beautiful smoky flavour. I hope this was down to a change of recipe rather than a one-off accident with the tarka!

Umana Yana has also been discussed here before, with @calam1ty concluding that it was “the best roti i’ve had while in london but wouldn’t tempt me back” due to “an excellent home experience that has spoiled us”.

Speaking solely about the bread to start with, I thought it was fine though not as good as Roti Masters (a little less flexible, slightly heavier in texture, not dhal puri). I liked the filling; a “pulled”-style chicken and potato curry, with some very good home-made scotch bonnet sauce to spice it up. I did wish it had been folded up as a wrap, like they do at Roti Masters, rather than spread out on a plate (photo).

I intend to go back some time and try the rice and peas, and hopefully one of their other curries.

Their house speciality is bhajia of various types, particularly the “Nairobi bhajia” (thinly-sliced potatoes) (photo). These had a flavourful batter and were crisp and non-greasy. A good fresh chilli sauce on the side.

A Somali cafe I spotted from the bus and went back for a closer look at. Fish and rice (photo) was OK, but my takeaway fish samosa was outstanding, with a beautifully flavourful pastry and a filling consisting of well-cooked fish (the internet suggests this might have been tinned tuna?) interspersed with finely-chopped barely-cooked onion and a good hit of fresh chilli. They open from 8am so I plan to go back and have breakfast there some time (and buy as many samosas as I can carry).

Make sure you get the hot doubles, they are the stand-out dish at RJ. I prefer the pumpkin roti filling than goat, chicken etc. They also sometimes have intriguing sweets available, if you like tamarind etc.

Make sure you get the hot doubles, they are the stand-out dish at RJ

I was at Roti Joupa a few weeks ago and had an impromptu picnic on Clapham Common. The hot doubles are great as is the macaroni pie. It comes with a tamarind sauce that really works well with pie. 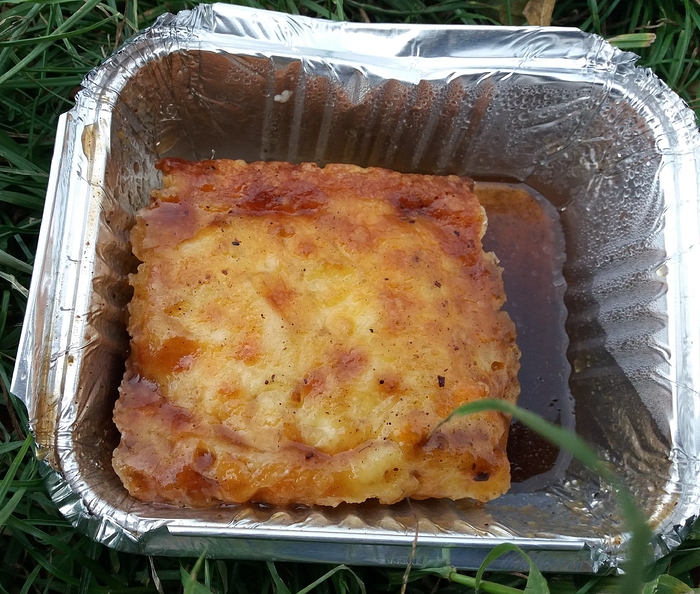 Noted re both doubles and macaroni pie! I love tamarind.

Finally made it to Roti Joupa today. The doubles (photo) was (were?) very good, as @ds and others have said — beautifully soft fresh flatbread wrapped around soft savoury chickpeas with a vibrant fruitiness added by the hot sauce and tamarind sauce. If I were to be picky, I’d say the chickpeas were over-endowed with skin, but I did like their texture apart from that.

The bread didn’t seem fried, which puzzled me a little. I thought the bread in doubles was meant to be fried?

Also had the macaroni pie (photo) as takeaway, and thanks for the tip re tamarind sauce — they started putting on the lid without putting any in, but thanks to @paprikaboy I knew to ask for it! The sauce definitely makes the dish.

Glad you liked it. The sauce definitely makes it.

Popped in yesterday and gave the macaroni pie a go. Wow, it is so good with that peppery, garlicy tamarind sauce. Calorie bomb! Thanks for the tip off.

Also mixed up my usual pumpkin roti routine and got mixed veg roti instead. The mixed veg included potato, pumpkin, spinach, green beans and possibly more veg that I’ve forgotten. I enjoyed this more than the pumpkin actually, so am glad I branched out.