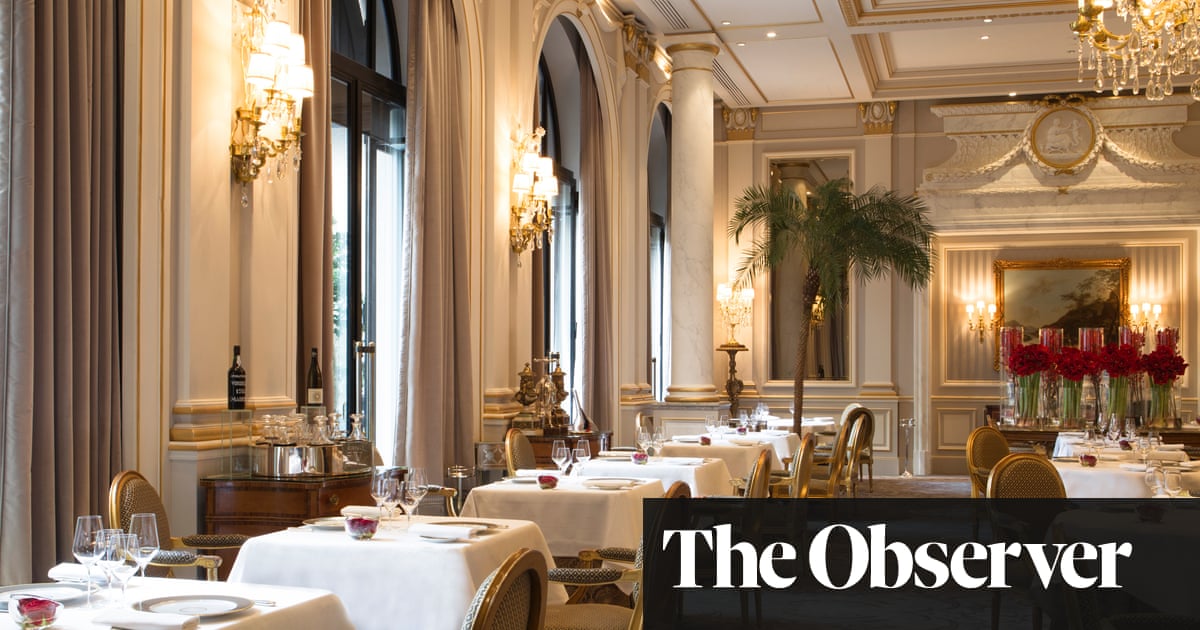 It was supposed to be a joyous trip to one of France’s famous gastro palaces – what could possibly go wrong?

Some great lines in this and some shenanigans from the restaurant regarding photos. Well worth a read.

“The dining room, deep in the hotel, is a broad space of high ceilings and coving, with thick carpets to muffle the screams. It is decorated in various shades of taupe, biscuit and fuck you.”

It is a fine review.

That said I am interested in below the line comments (2,323 as I type this) which give a rather negative insight into the British psyche.

A proportion of the comments are along the lines of: “€600 for dinner - that’s a scandal, off with their heads; I only spend tuppence on groceries for a week; it’s only food; KFC/Nandos is cheaper”.

It is the Guardian (my newspaper of choice) and therefore I understand the left leaning politics. What does surprises me though is the number of comments that rubbish French food, the French attitude, and extol the superiority of British dining.

Given how frequently Jay and MoL savage British restaurant*, and how most high streets are dominated by chains the commentators really don’t understand food and have little taste, or else there are a lot more nasty little Englanders than I thought.

One concern I do have is that this review, IMO, feels a bit like clickbait. It ticks so many boxes to get commentators riled up: expensive; terrible quality; michelin starred; and french. And it definitely worked.

Plus there are the bad photos of food, or is that photos of bad food, on Jay’s own website that contrast with the restaurant supplied photos. Which simply add fuel to the fire.

Good to see the Guardian getting the traffic - just wish it wasn’t for such a review.

It has gone global and is reported in Sydney newspapers.

which give a rather negative insight into the British psyche.

I contribute regularly to a particular TripAdvisor forum. Now, before I go on, I know that TA is not generally the place to go for food recommendations - if you want good food that is. However, bear with me for a moment. The question often posed is along the lines of “which is the best restaurant”, often enhanced by “which is the best restaurant for our 25th anniversary celebration”. I pretty much always respond with the two places that are in the Michelin Guide (not starred) and, probably, a couple of others that I know from experience would do the job - places where, if I was on holiday and I had a significant celebration, I’d consider eating there. I am usually the only contributor to mention these places. Almost without exception, other Britons responding base their suggestions on places that give you a large quantity of food and/or sell it cheap - it is, clearly, their definition of a “good meal”.

Just on the subject of pricing, we went to the Fat Duck for my 60th birthday (2010). Loved every minute of it. Never gave a second thought for how much it was costing. Since it reopened, dinner is now £265 and, frankly, I’m not interested in paying that. It is really just too much. Which means I probably won’t be doing any high end Paris dining either.

A career boost for Rayner. Traffic jam? His own website is down now!

I tried to find other articles he has written on French restaurants I have eaten. Looks like he like classical French dishes though, he has written on Chez George, Bofinger… Well, he liked Au Pied de Cochon, which I find it overprice and bland. You can find more tasty pork dishes in more humble bistrot or brasseries with a much lesser price tag. There is no wonder why he dislikes the cooking of Le Squer, which is the opposite of the classical meals.

Actually, I believe Le Squer is at his peak of his career now, he got his three stars not long ago, he won the title of the best Chef of 2016 last September. I can understand some 3 stars chef in France aren’t in their prime time since a long time, but I’m quite surprise by the extreme negativity on Le Cinq, at this price tag, you can’t have a bad day. Does it imply that Le Squer is going too far (or not far enough) with his experiments and ignoring tastes?

Since it reopened, dinner is now £265 and, frankly, I’m not interested in paying that. It is really just too much. Which means I probably won’t be doing any high end Paris dining either.

I do agree with the indecency of price, if you have a look at most 3 stars in Paris, the meal will cost you 300-400 euros per head without drinks. Recently I have checked the website and thinking the possibility of a near future birthday lunch. The cheapest lunch in a 3-stars is L’Astrance, Pascal Barbot charges 70€ per head. Most places goes up to 150€ for the lunch menu, up to 400€ for tasting menu, meaning over 1000€ for just a meal and drinks for 2? Well, it’s really another world! Even one can afford, one shouldn’t.

It has gone global and is reported in Sydney newspapers.

That is high enough just in euros. And, with the current euro/sterling exchange rate, it is impossible.

Just on the subject of pricing, we went to the Fat Duck for my 60th birthday (2010). Loved every minute of it. Never gave a second thought for how much it was costing.

How much did you pay? (if you still remember)

FWIW, here’s a link to the Egullet thread which, towards its end includes my review - https://forums.egullet.org/topic/132646-the-fat-duck-2010/

Thanks for the link, a fun meal indeed, what I like is the no dress code: “some diners had “frocked up”, others were dressed in jeans and polo shirts.”, the French higher end meal are always a “stiff” with much formality. Also, the fact that now in 2017 and the women were still given a no price menu given it were them reserving, oh it was so last century thing.

It happened to us in 2011 at Il Pagliaccio in Rome. Which was quite funny, as it was my wife’s credit card that was paying for the meal. It was another expensive meal but worth every penny - my notes record that the bill was more than my entire annual salary when I started work in 1966 and, in 2011, was my entire pension for a week.

Never gave a second thought for how much it was costing.

I agree, when a meal is superb and delivers on ambiance, service, food quality and theatre, then the bill tends to be forgotten much sooner than memory of the meal fades.

I tend to get more irritated at bad food at mid-priced places these days. Often food that is on par with my attempts at home, spartan restaurants, minimal service (including no booking) and dishes arriving randomly i.e. when their ready rather than correctly paced.

dinner is now £265 and, frankly, I’m not interested in paying that

I agree a long lunch used to be expensive but fitted in the entertainment budget. The price rises have completely outstripped inflation etc and seem to be profit gouging. These days some of the bills are in the “capital expenditure” territory…and I would get better utility from a new TV than the fading memory of a meal.

The cheapest lunch in a 3-stars is L’Astrance, Pascal Barbot charges 70€ per head. Most places goes up to 150€ for the lunch menu, up to 400€ for tasting menu, meaning over 1000€ for just a meal and drinks for 2? Well, it’s really another world!

I have never tried the ALC so can’t compare with the bargain set meals at these 3 stars. But I have enjoyed all of the ones I tried and think the prices have stayed reasonably constant over the last 12 years (allowing for inflation).

Guy Savoy’s “internet special” lunch for example has you ordering from the ALC and you get all the other bells and whistles. We came out at about €500 a couple a few years ago after hammering the wine and adding the cheese trolley.

That said the better value is outside of Paris and you can still eat at top starred places for a reasonable price. Heading to Lyon soon so I will test my own theory.

I tend to get more irritated at bad food at mid-priced places these days.

Agreed Phil. It’s to do with expectations and value for money. The most I’ve spent on a meal for 2 is £300 ( This was the tasting menu at Roganic with accompanying wines). I couldn’t fault the food or the service and it was worth every penny. I’ve spent half this at some 1*s in London and felt a little short changed by the experience.

felt a little short changed by the experience.

I can do a full 30 minute rant on the poor experience of the 1* Nut Tree in Oxfordshire. It was not even decent pub food.

I had lunch at Le Cinq with my parents in 2012 and the meal was incredible; the service top-notch as well. The lunch menu at that time had two prix fixe offerings (3 courses for 95EU and 5 for 145EU), but as I recall the a la carte prices were completely outrageous (first courses in the 50-60EU range and mains 90-120EU). I assume this is because they want to encourage you to order the prix fixe, and it worked! The prix fixe menus had two choices for each course and for my mother, who doesn’t eat seafood, they were more than happy to sub something else when both choices were fish. In one case, they gave her a 6 oz slab of seared foie gras with strawberries - it was incredible!

Anyway, I read the review and looking at the photos, I would probably have been disappointed in the meal as well. I don’t know who was at the helm when we visited but there was no spherification of anything, not even a whiff of molecular gastronomy - just really excellent, sophisticated French cooking with perfect ingredients. Clearly the current leadership has lost its way a bit.