Lotus of Siam is considered by some sources as one of the best Thai restaurants in the U.S. I was visiting Las Vegas for the first time in a long while and wanted to try it out. Apparently the wait times without a reservation at dinner are quite long. The restaurant is located in a strip mall a little bit off the north end of the Strip. I went during lunch on a Wednesday and there was plenty of seating.

One of the first things you see when you walk in is their large wine collection behind a clear wall. They have a very impressive wine list, with a good sized section dedicated to rieslings, a wine that pairs well with Thai food.

One of their signature dishes. Crispy, sour, spicy, and salty. I didn’t like this as much as I thought I would, I think I got a little taste fatigue after a few bites. 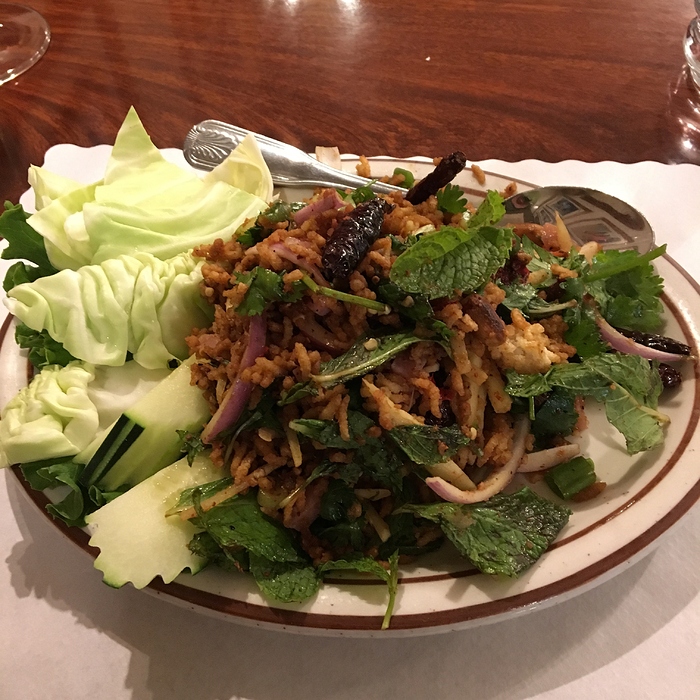 This was great. The fish (Chilean sea bass aka Patagonian toothfish) was fried perfectly, with a thin crisp crust and tender inside. The pad kee mao underneath was well flavored and had good textured chewy rice noodles. I did notice that in some spots the noodles were a little stuck together. A little pricy at > $30, but the fish is high quality. 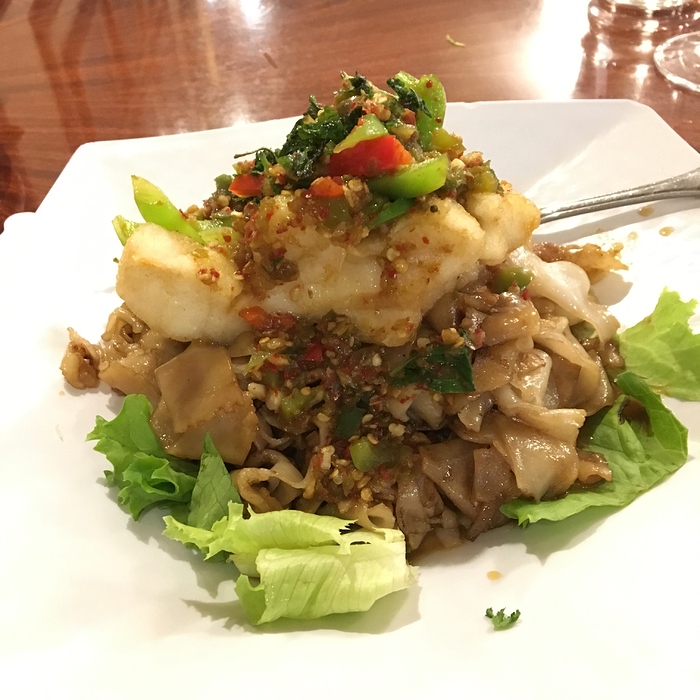 They ask you on a 1-10 scale how hot you want your food to be. Level 7 was plenty spicy for me. Anyone else have any favorites here?

Thanks for the recs!

I had a solo lunch at the bar at Lotus of Siam’s new location on E. Flamingo Road. Their original location closed last year due to roof damage and still hadn’t reopened. Their new spot is a bit closer to the center of the strip.

This was great! The duck was a piece of breast meat that had a fried tempura or rice flour coating that enhanced the crispiness and kept crisp in the curry. The curry was very rich and flavorful with a good hit of lemongrass and a little booziness from the cognac. Didn’t look overly large but was quite filling. 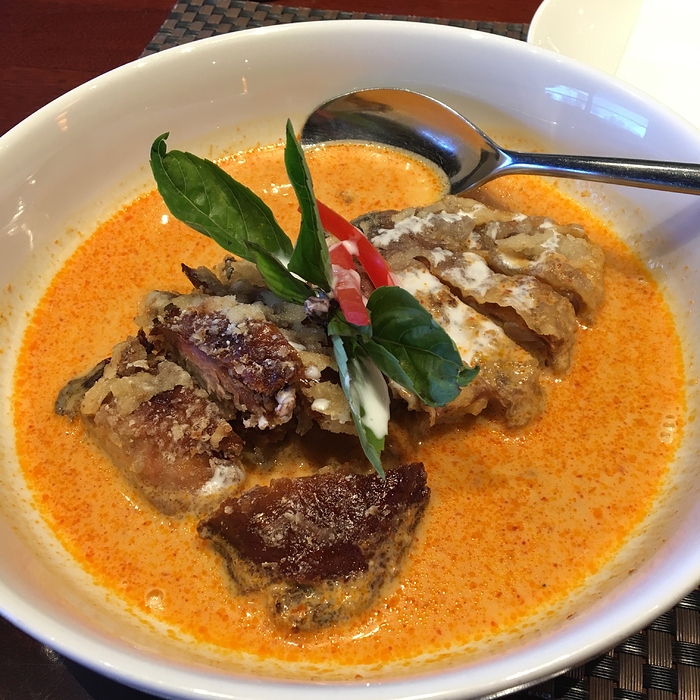 Anyone else have any favorites here?

LoS does Northern Thai well and there’s not many that do (at least not in LA, LV and SD). I think they’re the only place in LV that does Northern Thai now, I heard there was a noodle place that made a decent Khai soi, but they’ve closed long ago.

Dishes I’d recommend to a foodie (because they’re so rare to find anywhere else in the US):
Khai Soi - noodles in a curry soup, Northern Thai style
Gang Hung Lay - pork belly with skin still attached in a masala curry
Thum Ka Noon - it’s a salad made with jackfruit and pork, but it’s unlike anything I’ve ever tasted. I can’t explain it. Thai pulled pork? Thai carnitas?
Nam Prik Ong - it’s a crudite plate served with a tomato-based dip. Very flavorful.

Whether or not they’re “delicious” is up to you, but I doubt you’ll find another place in the US that’ll make it better.

My personal favorites is the Khao Soi, Sea Bass with Drunken Noodles, Seafood Pad See Ew and Crispy Duck with Panang.
Public faves that I’d pass are the garlic prawns (ridicuously expensive for something you can find everywhere) papaya salad and pad thai. The latter two are good renditions but nothing special and nothing to warrant the price tag.

Thanks for the recommendations! Will have to try the khao soi sometime. I liked the new digs, a little darker then the original location and slightly swankier. Didn’t feel that much different though.

considered by some sources as one of the best Thai restaurants in the U.S.

Do you think that’s the case? Should I spend a meal here on an upcoming visit?

Do they have a bar where a solo diner can sit and eat? Reservations recommended?

LoS is worth a visit at least once if you’ve never been. I’ve always enjoyed my meals there. As for the question, “Are they the best Thai restaurant in the US?” Maybe …

Having said that, if I only had one meal in Vegas it would be at Raku.

I don’t know much about Laos cuisine, I learn something new everyday. 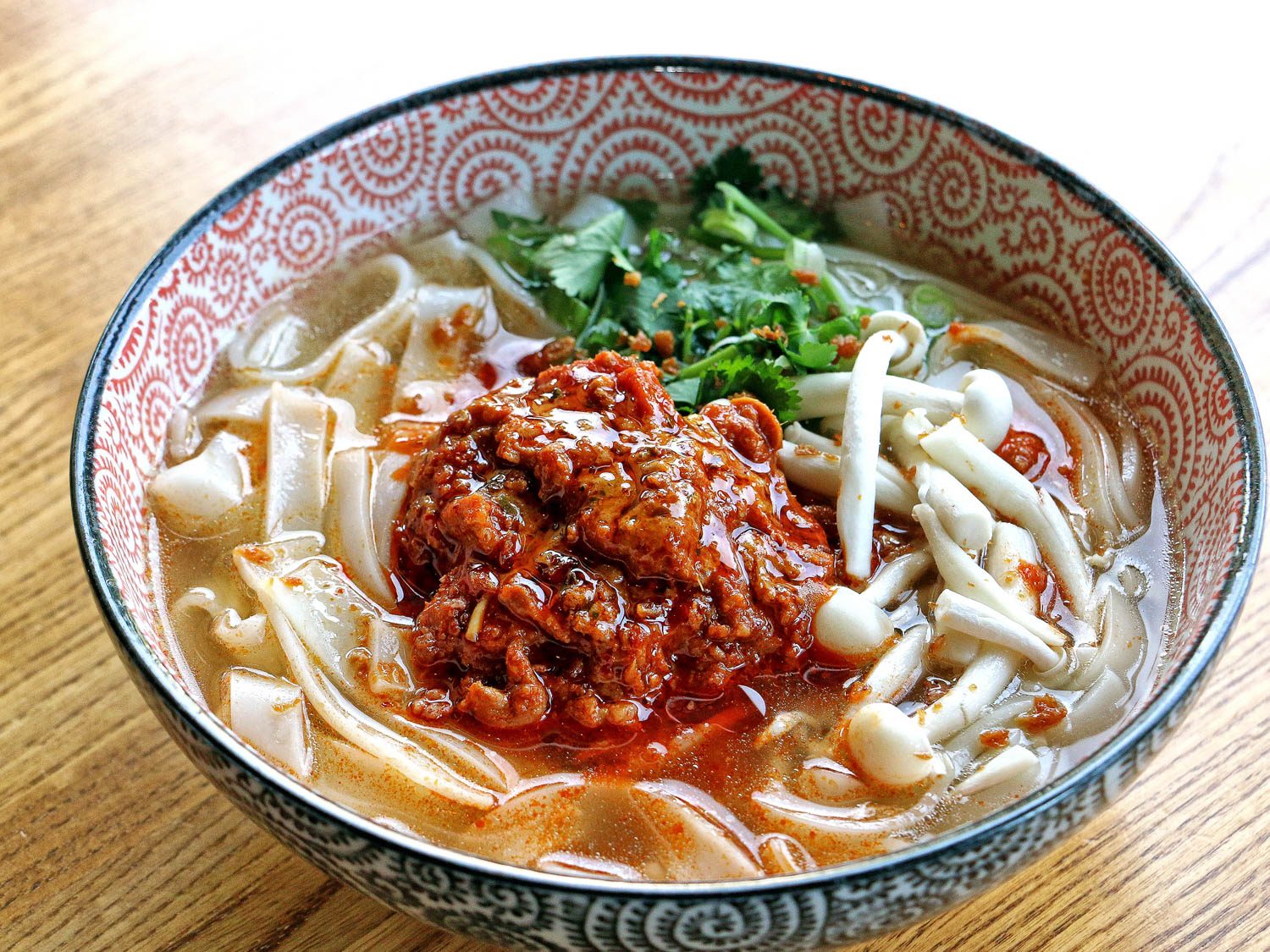 The cuisine of Laos is often unassuming, but packed with flavor in a way that showcases the country’s prowess at marrying herbs, chilies, and the pungent bacterial riot of fermented meat and fish. If you’re lucky enough to be able to visit a Lao...

As you can see from the article, there’s a lot of overlap, such as Khao Soi, Khao Niew (sticky rice, more common than Jasmine rice) and Mr. Happy’s Nam Kao Tod. I wouldn’t say Lotus of Siam is Laos food, I think it’s closer to Burmese food and the area around Chiang Mai, but I’m assuming here. Hopefully someone will jump in and give a better answer.

Northern Thai (Chiang Mai) and Burmese food is different, it’s a heavy use of pork, such as the Gang Hung Lay, pork is also a flavoring agent. Their sauces are more rustic, not as spicy and they remind me of Indian spices, like a masala. This is especially true for LoS Nam Prik Ong. This may be the Burmese influence.

Will you like it? I don’t know, I’m going to say it’s an acquired taste, or every Thai restaurant would be doing Northern Thai food. It’s definitely different.

I recommend you go, just because it’s so famous. As a foodie, I’d recommend the Northern Thai menu, just so you can say you had excellent Northern Thai food. Honestly, I only eat the Khao Soi regularly from the Northern menu because the others don’t personally appeal to me. I’d also order something “safe” (please, not their pad thai) so the visit isn’t a complete bust, I recommend their Crispy Duck with Panang and talk to the knowledgable sommelier who has excellent Riesling recommendations for your Thai food (another rare find).

Their new digs is also nice. You can always go up the street and get dessert at Paris Hotel or eat some more at the Grand Bazaar Shops at Bally’s.

I second the Raku recommendation!

Do you think that’s the case? Should I spend a meal here on an upcoming visit?

Definitely go to LOS - still one of the best Thai restaurants in the US - the northern Thai menu is quite nice but go for the more unusual dishes like KHA NOM JEAN NAM NGYOW (but wouldn’t go for the Khao soi as it a quite common dish in many other Thai places). But you can pick many other good dishes from LOS across their different menus. The only dish we always order is Nam Khao Tod

I just had an “insider” comment that LoS does indeed serve Issan food but that is not what is on their Northern Menu. The Northern Thai I’m talking about is Northwest Thai, Issan Thai is the area which neighbors Laos, which is more East and Northeast.
Fascinating. Thank you for the tip, random person.

Excellent. I just made a reservation.

The original question was posed just so I have some ways to reconcile between all those best-of articles and opinions here.

This time I had the garlic prawns (sorry @smokeydoke, had to try them). They were good. The skin is removed partially from the (large) shrimp and is fried to the point where they are edible and crunchy. They were lightly battered and coated in a light slightly sweet sauce. No heads though. Good tasting shrimp though a few could have been cooked a little less. Decently sized portion, which is good because its around $30. 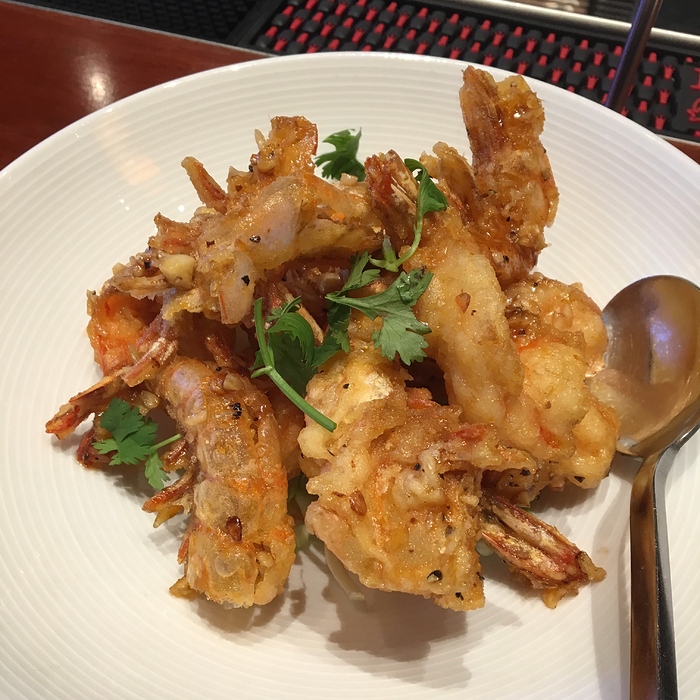 I also had the khao soi with beef ($12.95), which was very good. The egg noodles were not quite al dente but not too soft either. Good texture. They were in a nicely flavored lukewarm broth with a some creaminess from the coconut milk. One of the better khao soi renditions I’ve had. It came with a condiment plate with pickled mustard greens, chopped red onion, lime wedge, and some fried noodles. 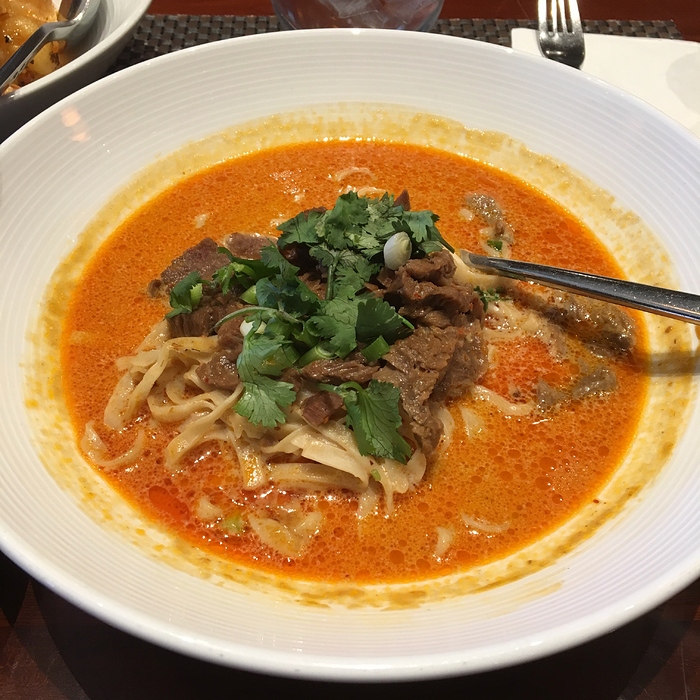 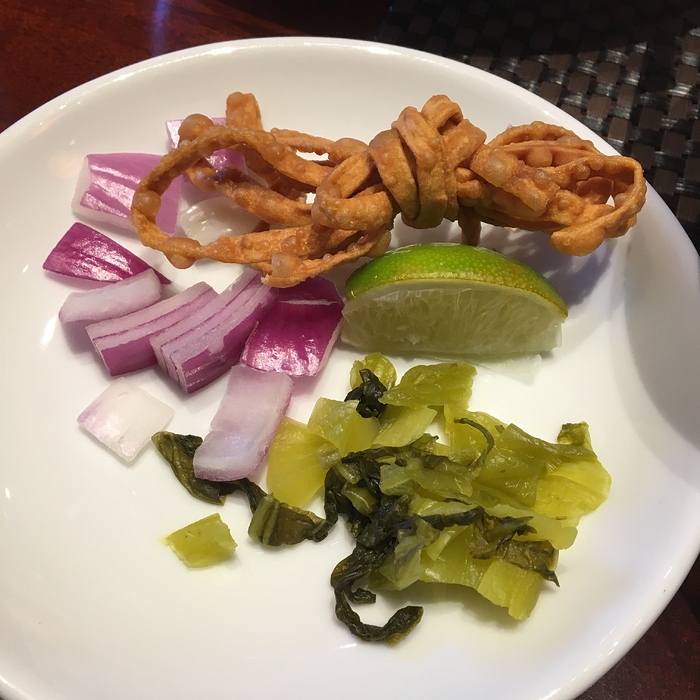 Don’t be sorry! Glad you enjoyed them, I just can’t justify the price point, but then again, I live here.

I like the khao soi too, but I always get mine with pork. I’ll have to try it with beef sometime.

LoS is definitely NOT Laos? Where did you get such an idea?

LoS owners are Burmese/Thai and there is a thriving Burmese community in Las Vegas that I’ve had the honor to be a part of in the last year. I actually know people who are tied to LoS and know the owners personally. Having said all that, Pan (?) Saipan(?), I don’t know her personally, is not as interested in maintaining her Burmese ties but is flourishing on her James Beard Award and trying to create cutting-edge dishes geared toward to tourists while keeping standards high as possible. That’s why the Northern Thai dishes are found in the back. They also heavily promote their wine menu.

There are plans to open a second location in Spring Valley, across the street from Ikea.