The rough-at-the-edges, working class neighbourhood of Pudu is one of the places I go to seek out good local hawker or street eats whenever I’m in Kuala Lumpur. If one picks up the courage to traverse its gritty, grimy streets, Pudu can sometimes yield the most amazing dining gems one can find in almost any major city in South-east Asia. Last weekend, I was introduced to perhaps one of KL’s finest “wantan noodle” spots there. Located in Restoran Good Friend, the stall is nicknamed “Kei Suk Wantan Mein” by local KL-lites: “Kei Suk” basically means “Uncle Kei” in Cantonese, the lingua franca of KL/Klang Valley’s roughly 3 million Chinese populace. " Mein", of course, is Cantonese for noodles (as in “chow mein” means “fried noodles”).

Wantan noodles is perhaps the best-known Cantonese noodle dish - a dish first concocted around a century back during the Qing or Manchu dynasty in Guangdong province, southern China. The dish consists of fine wheat noodles made from flour, duck’s eggs and what the Cantonese call “kan sui”, an alkaline solution of sodium bicarbonate and potassium carbonate which turns the noodle yellow and gives it its trademark springy, al dente texture. 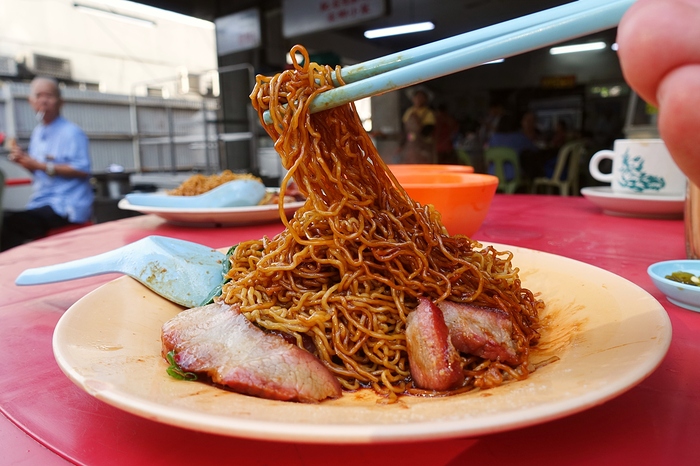 Whilst in Hong Kong, the local HK-style wantan noodles is usually served in a light broth made from the slow simmering of pork bones, toasted, dried flounder and shrimp roe for hours, and then served with poached wantan dumplings filled with shrimps, and chopped yellow chives, the version in Malaysia and Singapore are usually served “dry”, whereby the noodles are blanched then dressed in a sauce made from a blend of dark & light soysauce, oyster sauce, sesame oil and drippings from the “char siew” roast . A small bowl of poached wantans in a light soup usually accompany the plate of wantan noodles, garnished with Chinese BBQ pork or “char siew”,chopped scallions and some poached leafy greens like “choy sum”. 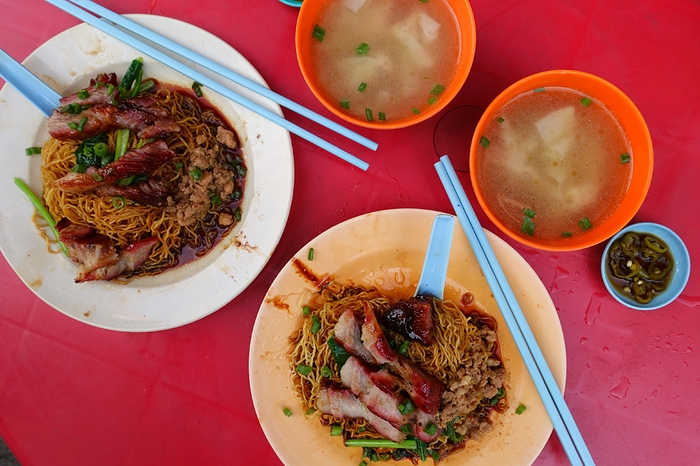 Whereas many top HK wantan noodle spots like Mak An Kee, Kwan Kee or Ho Hung Kee uses either all-shrimp wantans, or shrimps-with-fatty pork wantans, Malaysian and Singapore wantans usually has a higher ratio of minced pork/fatty pork to shrimps for filling, which is perhaps closer to the original wantans in inland parts of Guangdong which has more meats, compared to coastal cities like Guangzhou, Macau and Hong Kong which have more access to seafood, and hence their preference for shrimp filling. 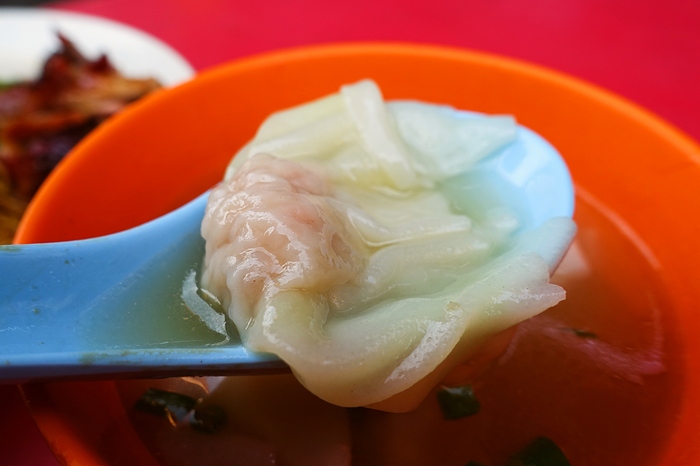 In Malaysia, its various states have their own slight variations of wantan noodles - Penang wantan noodles tend to have a higher sodium bicarbonate/potassium carbonate content, hence their chewier texture compared to KL’s. In Malacca, chili paste is added to the noodles, something which some Singapore spots like Fei Fei in Joo Chiat also does.

My fave type of wantan noodles is the KL version, and the industrious octogenarian Uncle Kei (his surname is actually “Tow”) still insisted on personally blanching the noodles in hot, boiling water for each bowl served at his stall, as he has been doing for over six decades. Mr Tow is born in Kuala Lumpur, but his father was an immigrant from Guangdong, China. 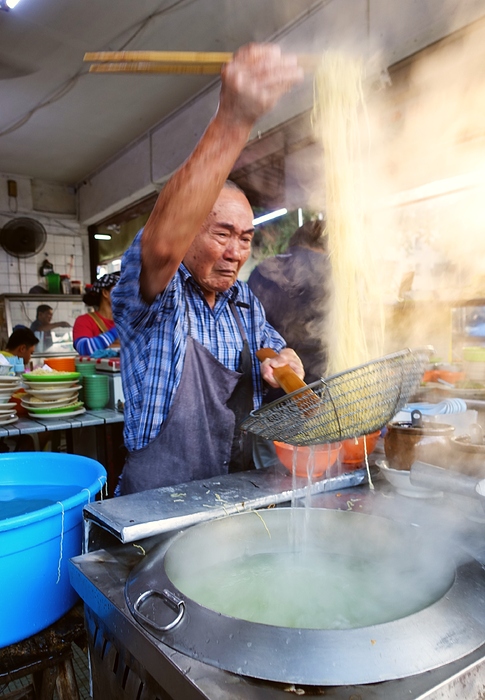 His son, Tow Jr, has now undertaken the task of preparing the delicious “char siew”, one of the best I’d had anywhere in KL, if not Malaysia. Well-marinated and perfectly roasted to yield melt-in-the-mouth pork strips with a delicious, caramelly charred exterior. 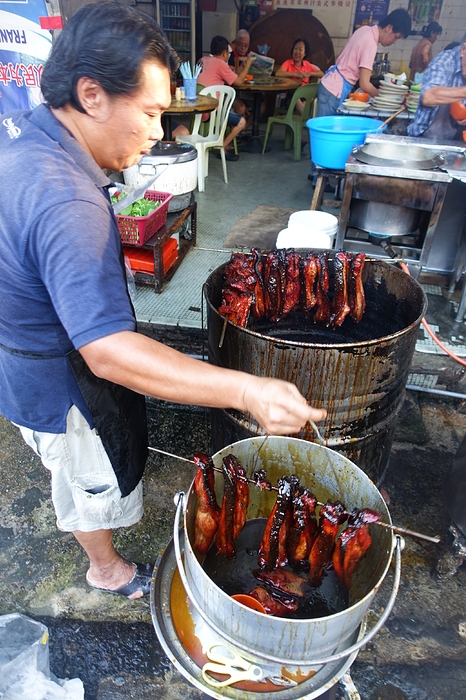 Come early - it opens from 7.30am each day, and will be packed with regulars almost from the word go. This place is family-run - Mr Tow, his wife, his children - each knew their part in the whole process , and they function as a tight unit, a well-oiled machine where no one lets the ball drop. Amidst the seeming chaos of splashing hot water, clattering bowls and heat from the charcoal braziers, they work wordlessly, their passion and dedication to their craft showing through.

Average waiting time for your bowl of deliciousness is about 1 hour, but it’s worth every minute of the wait, trust me. 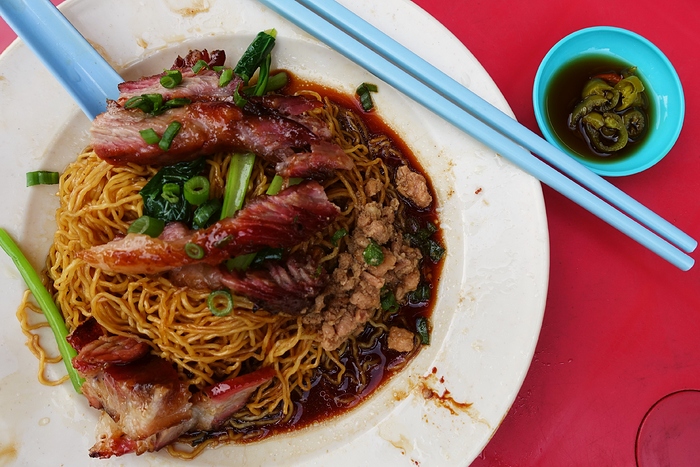 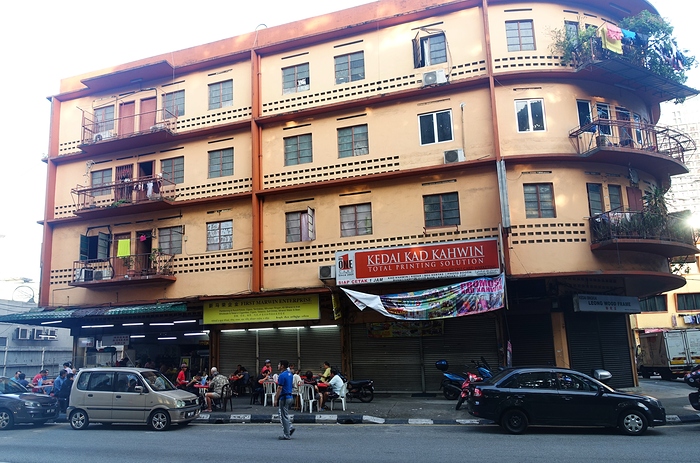 I bought a wok to chase after your posts, Peter. Viewing this post, anything I make will be an also ran…

A wok is always a worthwhile investment, Jim.

But I’m always amazed by how KL’s resourceful cooks customise old oil drums to become barbecuing/smoking “ovens”. They not only make “char siew”, but also crisp-skinned roast pork (called “siew yoke” by the Cantonese) using these.

These are the oil drums used at Wong Mee Kee, also located in Pudu. I think the “siew yoke” here is the BEST in KL. 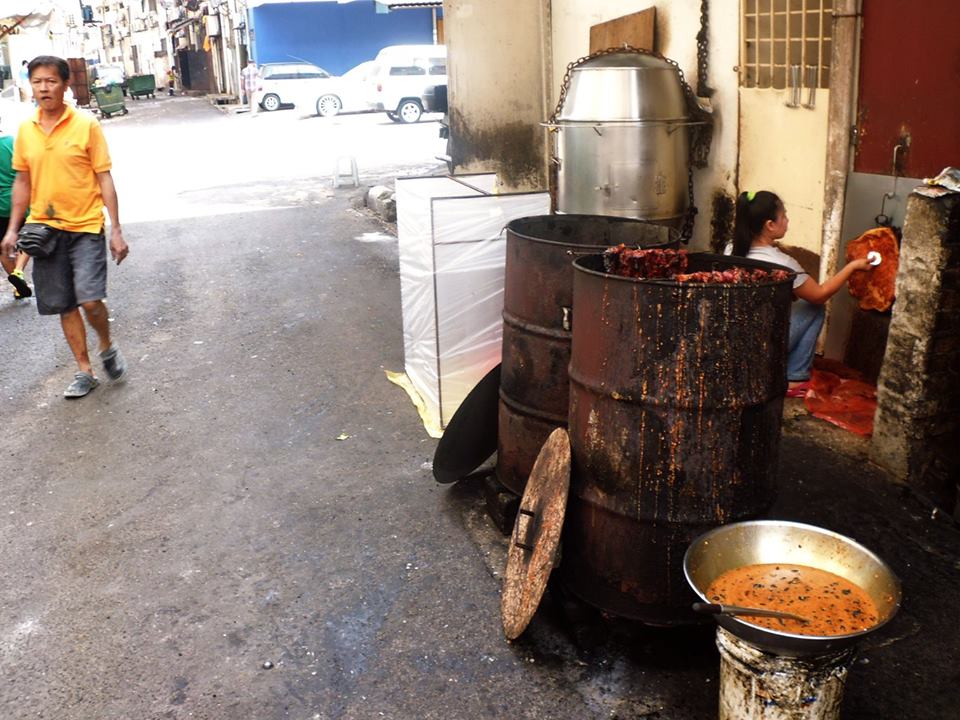 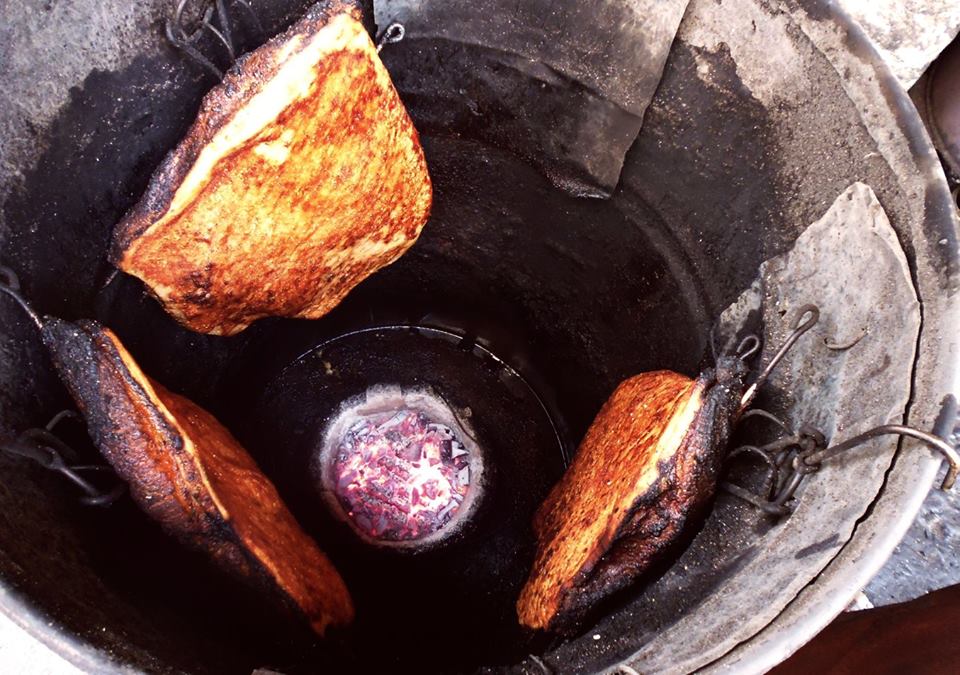 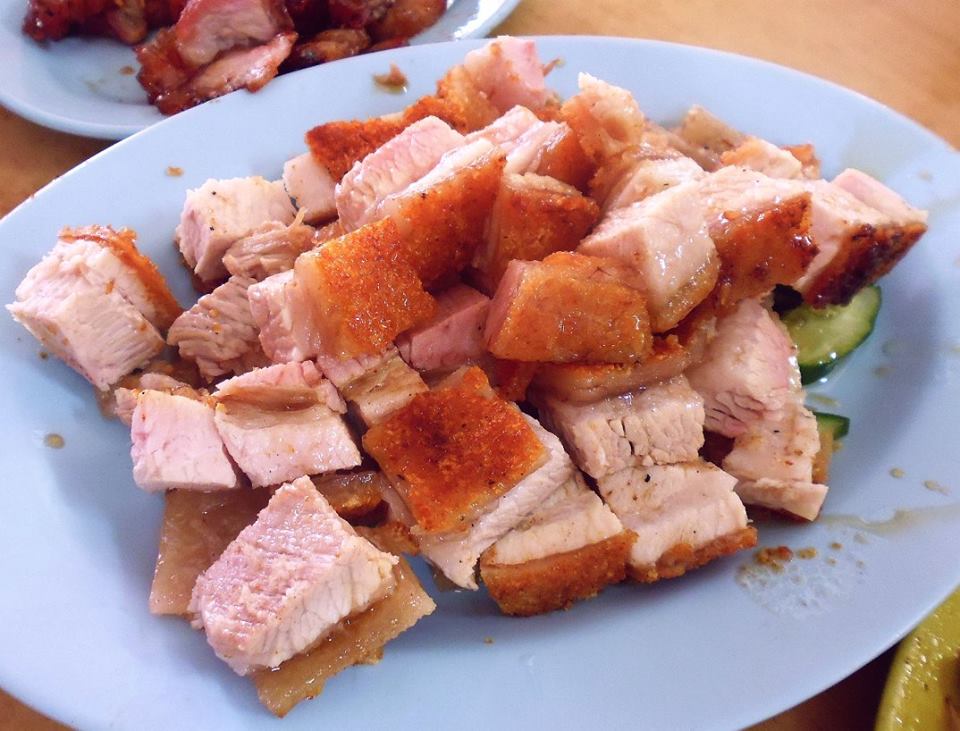 Wong Mee Kee also does “char siew”, but it’s disappointingly bland and nowhere near the standard of the good ones in KL. 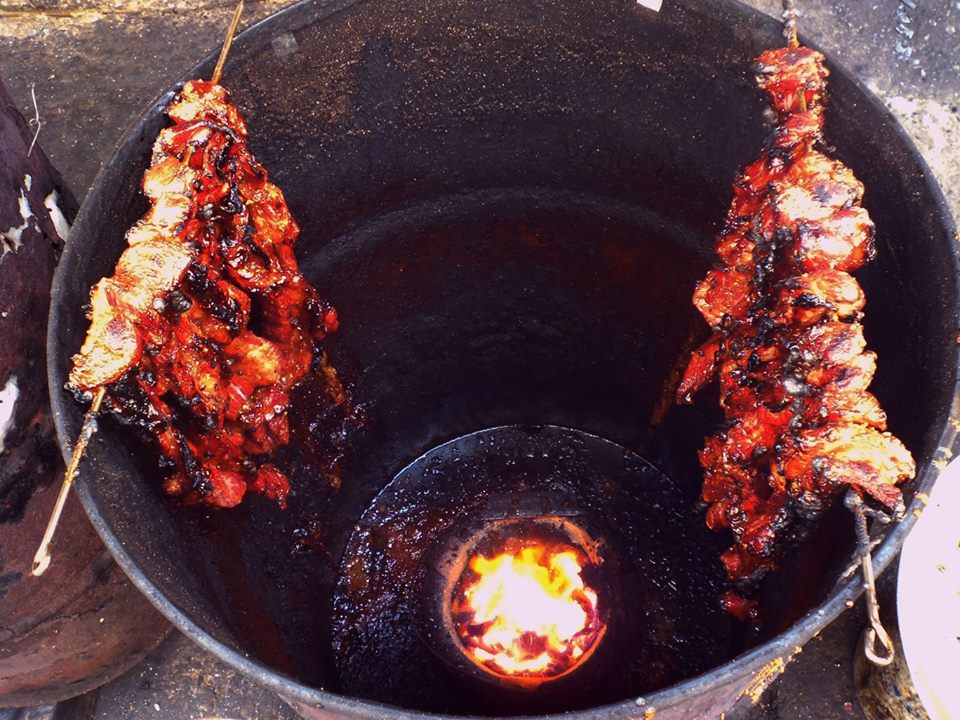 Yup, a DIY cooking apparatus. Probably harked back to the 19th-century when Chinese immigrants came to British-Malaya, bringing little more than the clothes they wore. As the saying goes, necessity is the mother of invention.

Same idea in the US, from someone who used to cook in a *** kitchen. 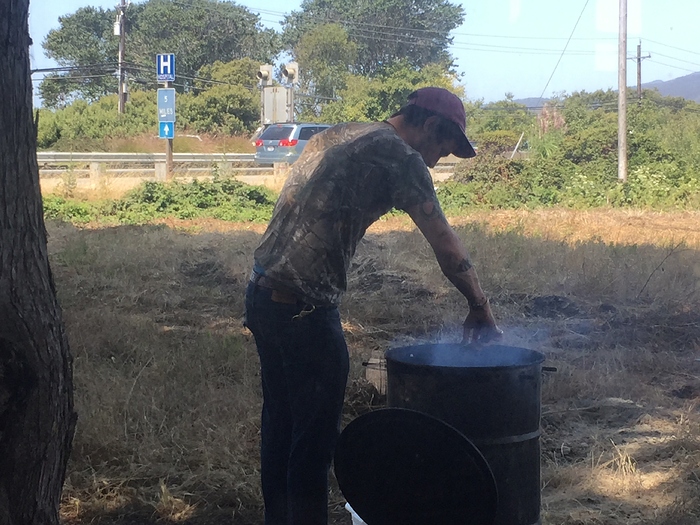 Thank you for the writeup about my favorite type of wantan noodles. One day if I am around that area, I’d have to give Uncle Kei a try, 1 hour wait or not! Although I am impressed how much effort locals go through to eat a humble bowl of noodle. There’s gotta be magic in it.