Guizhou (or Qian) cuisine is a close counterpart of the more widely-known Sichuan and Hunan cuisines.

In the landlocked central part of China, Guizhou province is sandwiched between Sichuan and Hunan provinces, and all three cuisines share a common love for spiking their food with copious amounts of dried chilis. Guizhou cuisine’s trademark characteristic is the combination of spicy and sour flavors of most of its dishes. The tongue-numbing chili levels in Guizhou’s trademark dishes easily match those of its Sichuan and Hunan cousins.

Guizhou Garden is one of the few restaurants in KL offering Guizhou cuisine, and a couple of my KL friends (who are Cantonese) decided that we should test our stomachs’ constitution one evening with our maiden foray into Guizhou food. Singaporeans & Malaysians are used to the presence of chilis in our food since the time we were weaned off milk - so, how bad can Guizhou cuisine be? Quite a bit actually, as I was to find out.

Our dinner that evening consisted of:

The vegetables’ fresh crispiness was a redeeming feature somewhat. 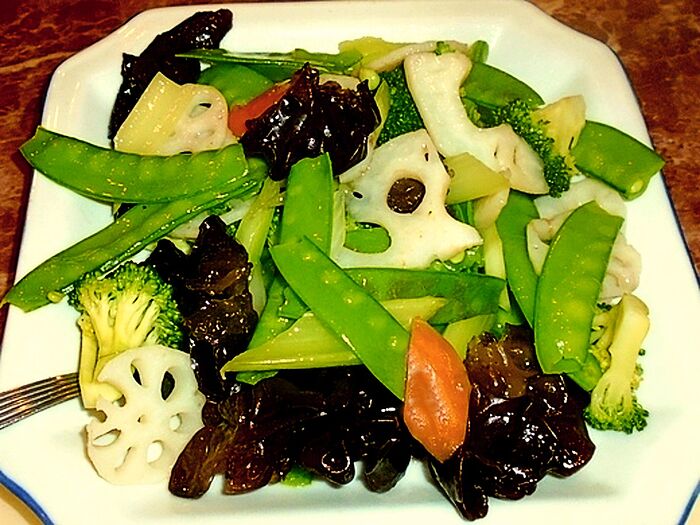 But then, that’s when the pièce de résistance arrived - it was this beautiful platter of steamed carp, sliced lengthwise in half, and topped with zāo là (Chinese: 糟辣) - preserved minced chili pepper with ginger and garlic.

There were enough minced chilis in there to put hairs on one’s chest, with copious amounts of minced ginger, chopped coriander and scallions for added flavors.

Glass noodles, which lent an additional textural dimension to the dish, were provided - to soak up the spicy ever-present chili-oil gravy,

It was one of the spiciest dishes I’d ever had in my life! Each sip of the chili-oil gravy was like a scorpion’s sting! 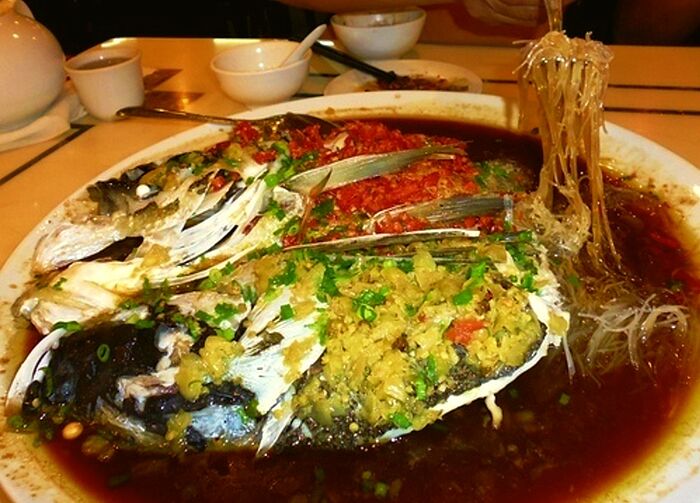 Quite an experience - and strictly for chili-heads! 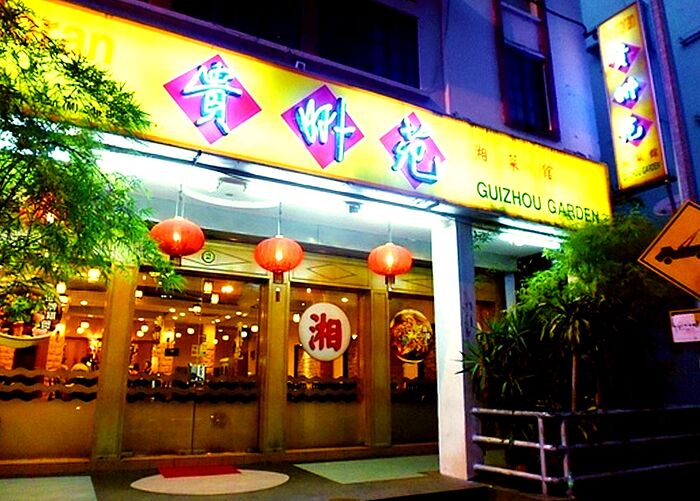 I don’t have a great tolerance of chilli. I do battle my way through the offerings at the Sichuan place in Manchester’s Chinatown. When this place first opened, it was a big hit with the local regulars posting to eGullet. A poached lamb dish was the one folk raved over. I always wimped out ordering it. But, recently, they introduced a pork version and I decided to try. Well, they’ve either toned it down or the eGullet folk were just big softies, as it wasnt at all out of the way for heat.

Glass noodles, which lent an additional textural dimension to the dish, were provided - to soak up the spicy ever-present chili-oil gravy,

I was about to say that if the dish was spicy already, all that heat was going to make this glass noodle probably the hottest glass noodle ever…!!!

Where did the chef come from, Guizhou?

The only time I ate Guizhou food, it was a Guiyang noodle dish. The broth had a good dose of flavors from Chinese herbs/ medicine, which tasted a bit soapy, lol. It wasn’t that hot, however.

Where did the chef come from, Guizhou?

Yes, the head chef was from Guizhou, but he was assisted by a Sichuanese assistant chef and two local KL chefs, very likely Cantonese.