DC Restaurant at Darren Chin is a bit over two years old, and is currently firmly placed as one of KL’s top fine dining restaurants. Ensconced along a row of rather ordinary-looking shop-houses in the middle-class KL suburb of Taman Tun Dr Ismail (TTDI to KL folks), DC Restaurant offers KL-lites a glimpse into the kind of razzamatazz, sophisticated dining one normally associates with Singapore or HK (even Bangkok) in this region.

Service was polite, even if a bit unpolished - staff mumbled a lot in lower-than-necessary tones, and lacked the sophistication you’ll find in Singapore or other big cities in Asia. The décor was muted and tasteful - the better for the customer to concentrate on the food, I guess. Tables were bare - no flowers, no small artworks , nothing.

We opted for a 3-course tasting menu here as it was out first visit, and wanted to test the waters (after previous let-downs at Enfin by James Won and Sushi Babe - top-rated eateries in KL, but which won’t make the cut in Singapore or Bangkok).

One special mention first - the breads here are absolutely top-notch : traditionally French, and absolutely a delight. You won’t find any better elsewhere in KL: from the tiny croissants, to the baguettes and crusty boule. 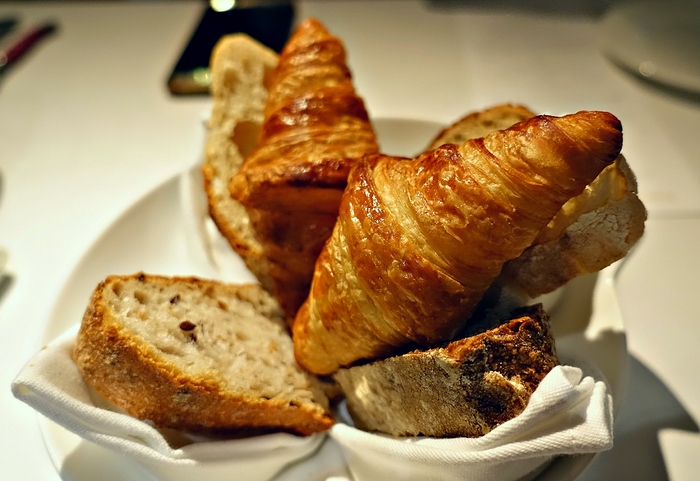 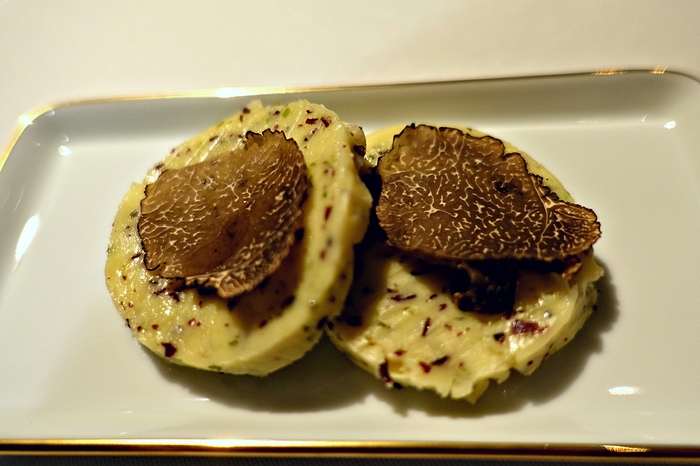 The amuse-bouche came in 3 parts:

One of the appetisers we ordered was the DC’s Seafood Medley - Miso cured Gindara cod; Galician octopus tempura; Grilled local slipper lobster with Gochujang aioli & Ficoide ice plant.
Of the 3 seafood items on the plate, the standout was the octopus, with a beautiful yielding texture - I never knew a cephalopod could taste so good: 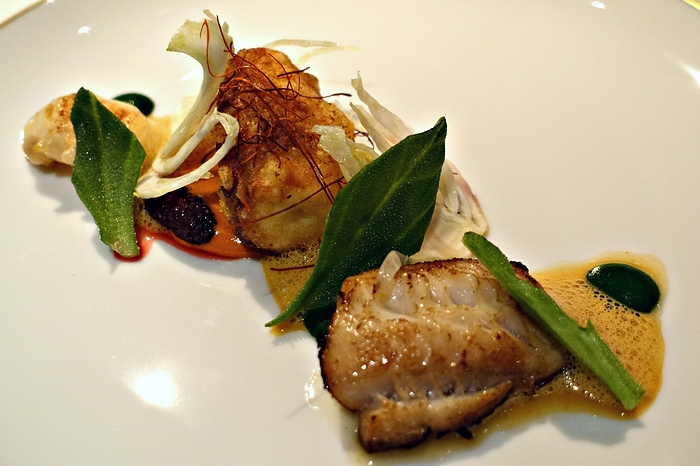 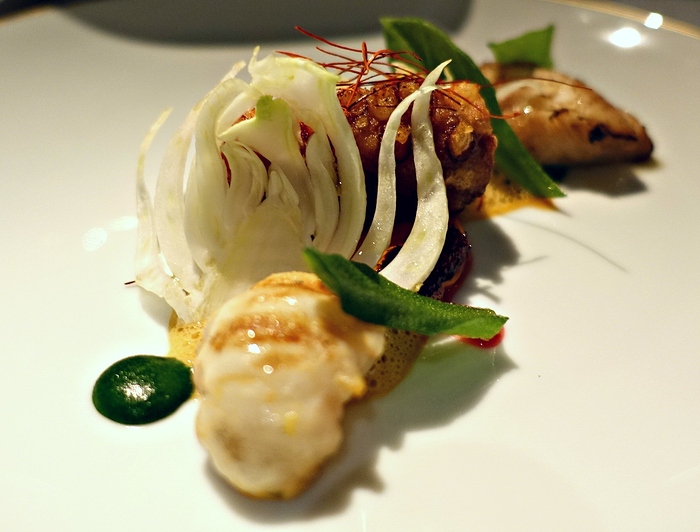 The other appetiser we had was the White strip lamb ribs slow-roasted in hay & served with spicy harissa; White clams in smoked olive oil in a Konbu phyllo parcel, all drizzled in lamb jus.
For me, the lamb’s scent was a bit overpowering, but otherwise, the dish was well-executed and very much enjoyed by my dining companion, at least. 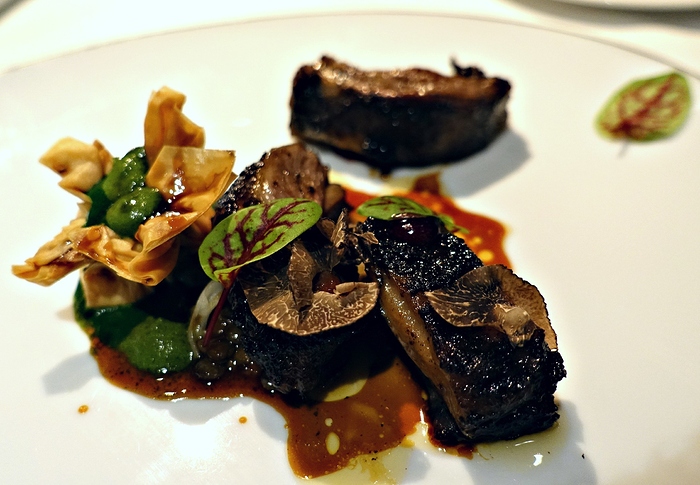 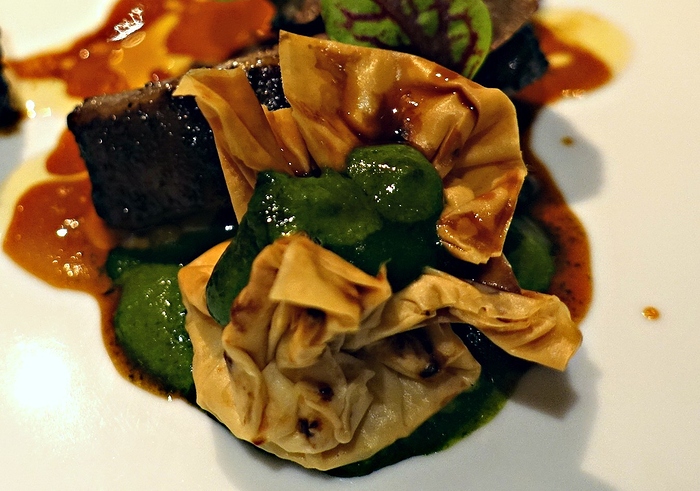 After the obligatory palate-cleanser (a sharp yuzu sorbet), the main courses were presented:

My main course was the Le Gibier - Slow roasted supreme of pigeon de bresse: Crusted sweet breads; Truffled celeriac cream; and green asparagus napé with miso hollandaise was presented like a piece of artwork, with a scattering of delightful, colourful nuggets of deliciousness. A bit overly fussy and perhaps too many things happening at the same time, but enjoyable. 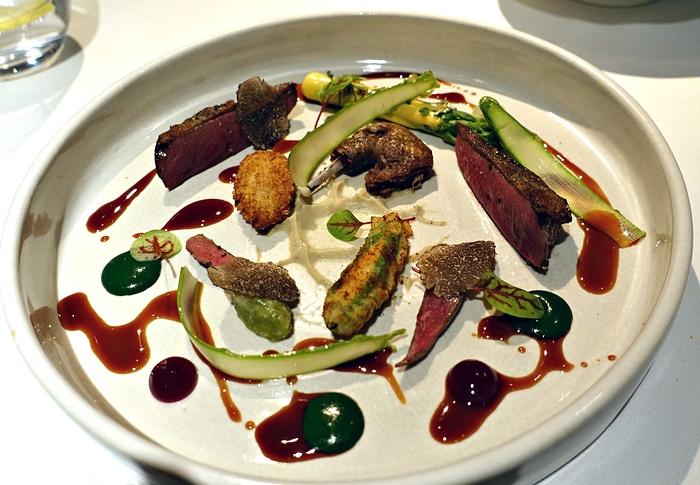 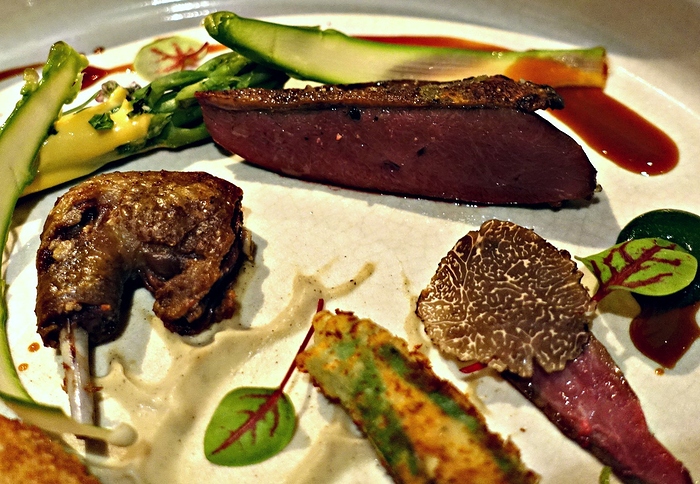 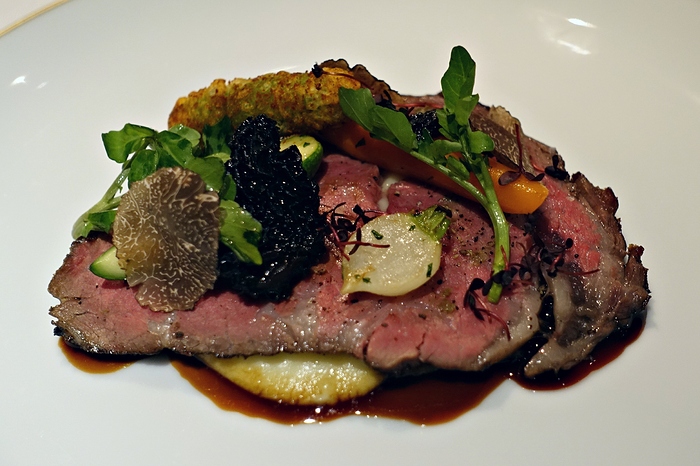 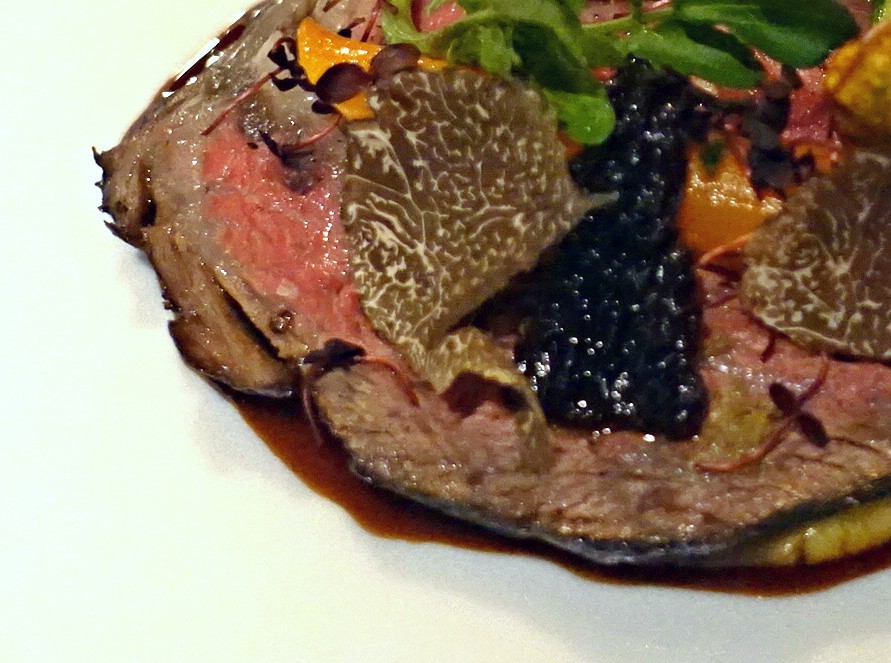 Desserts next. These were presented in two parts - the first one has a distinctly Asian slant: the “Coconut dessert in textures” was distinctly Thai, with pistachio “pudding” covering a sticky rice base with steamed mung bean & macadamia, served with fresh coconut ice cream. Very nice. 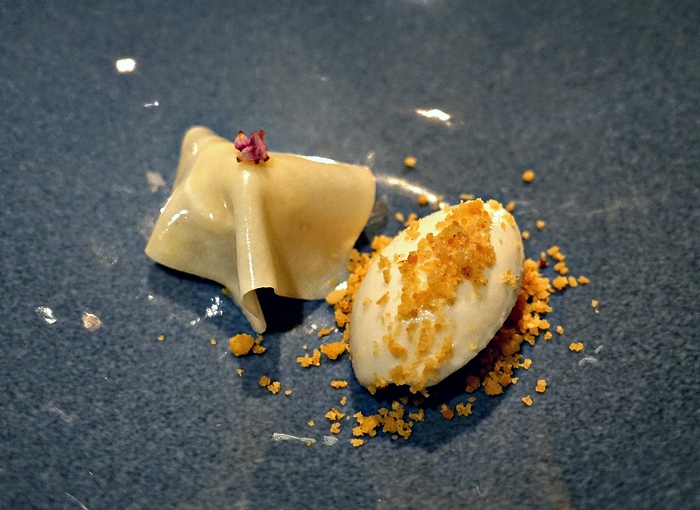 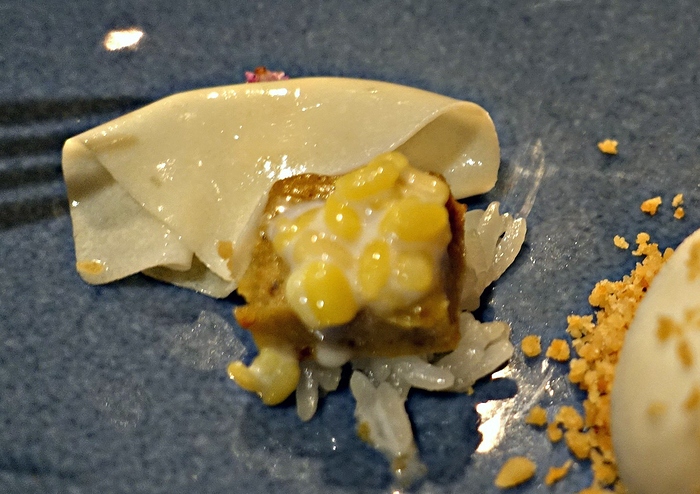 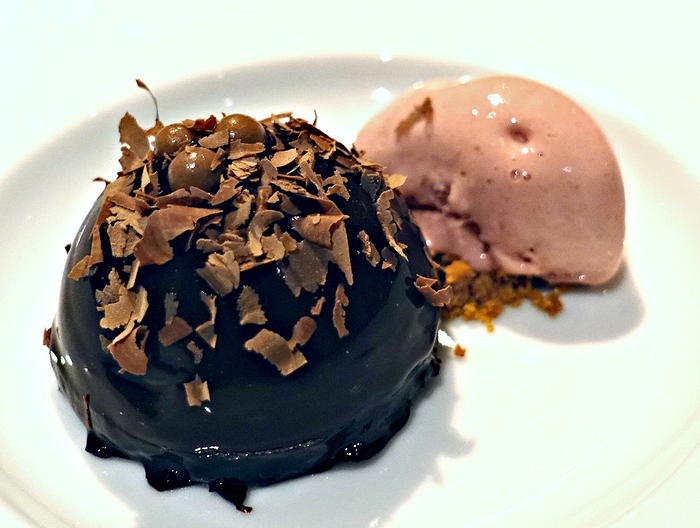 Petit fours at the end with the coffee. 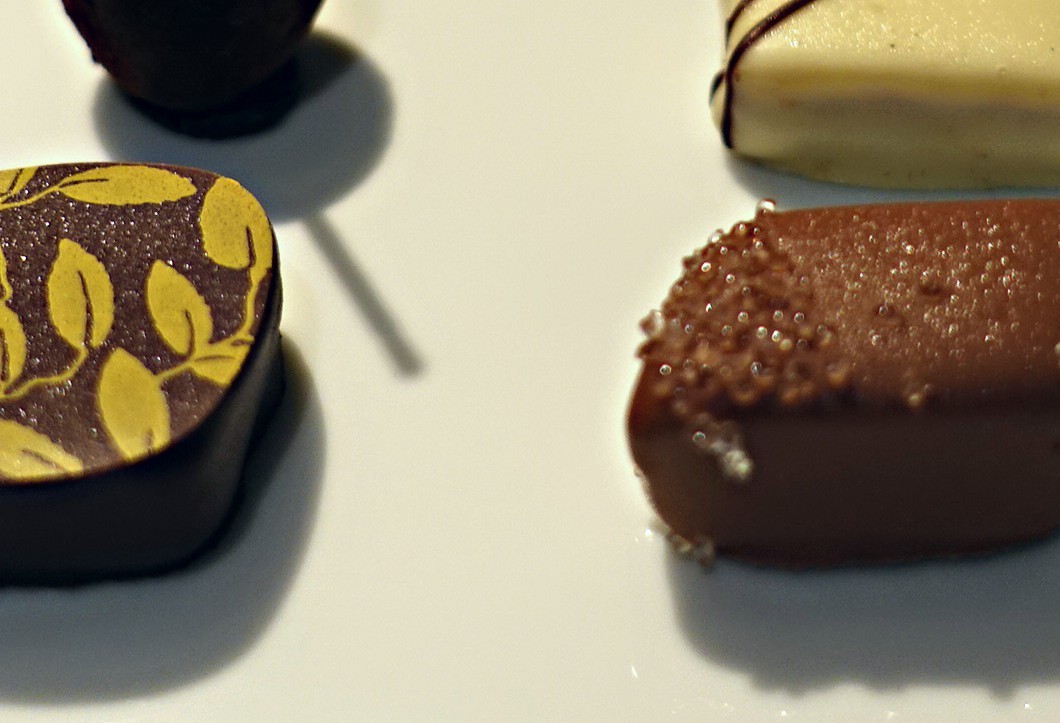 Overall, perhaps the best fine dining spot I’d tried in Kuala Lumpur, and perhaps one which has the potential to propel itself into the top league of best eateries in the region. KL usually fares pretty badly against other South-East Asian countries when it comes to fine dining - in this case, Darren Chin has shown that maybe, just maybe, he can succeed where others have failed. 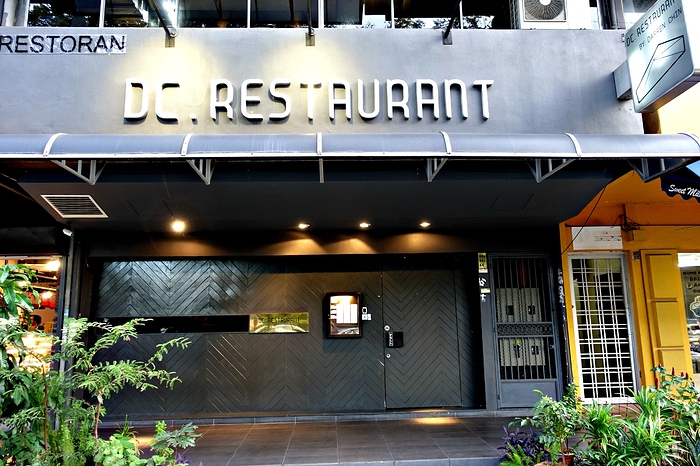 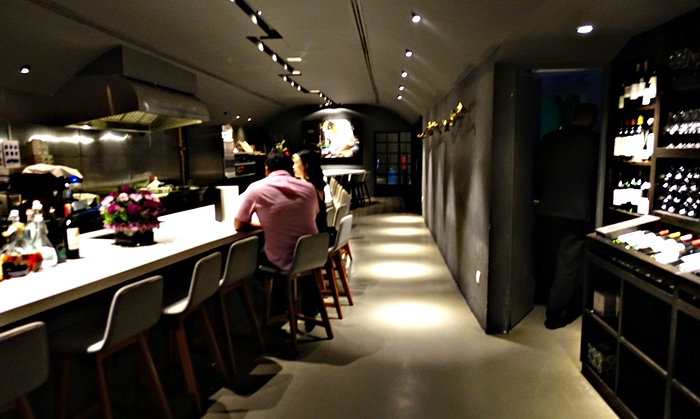 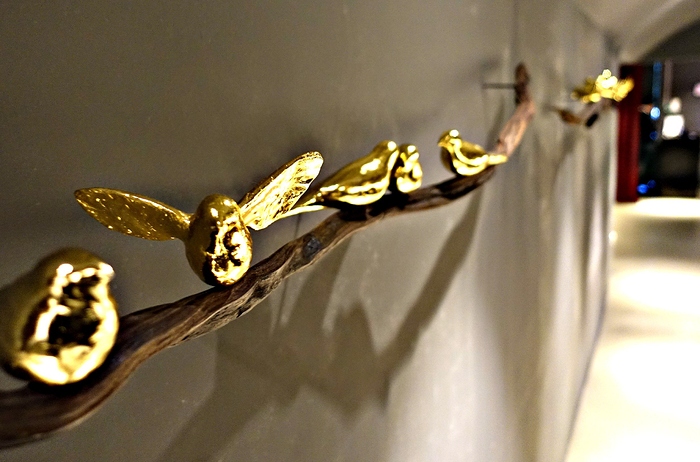 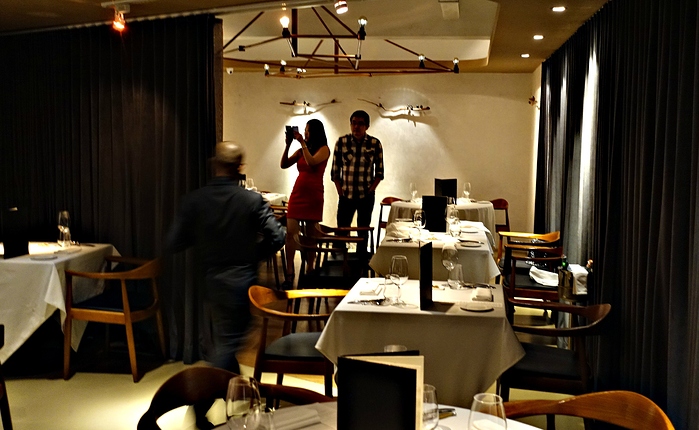