This Malay eatery, Anis Putri, first gained foodies’ attention back in 2011 - started by Kelantanese transplant to KL, Rozita Mohamad. The restaurant signboard upfront claims that it was “established in 1969” - but it’s probably a reference to Mdm Rozita’s birth year, as we understand that she’s 49 currently. It’s a popular breakfast and especially lunch spot, and gets pretty crowded towards noon. 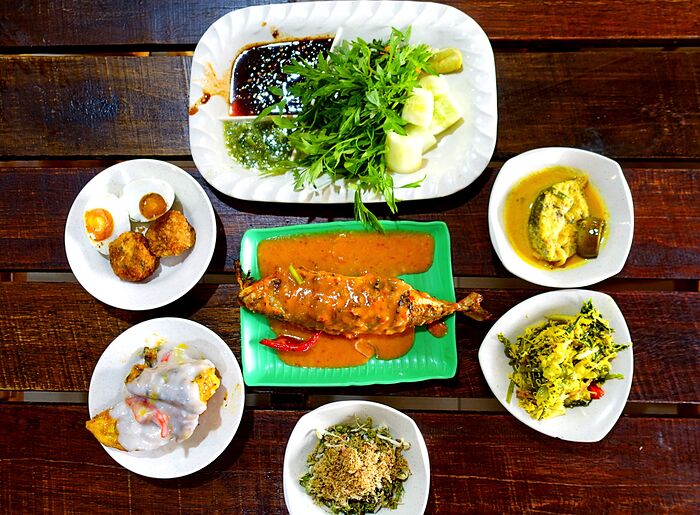 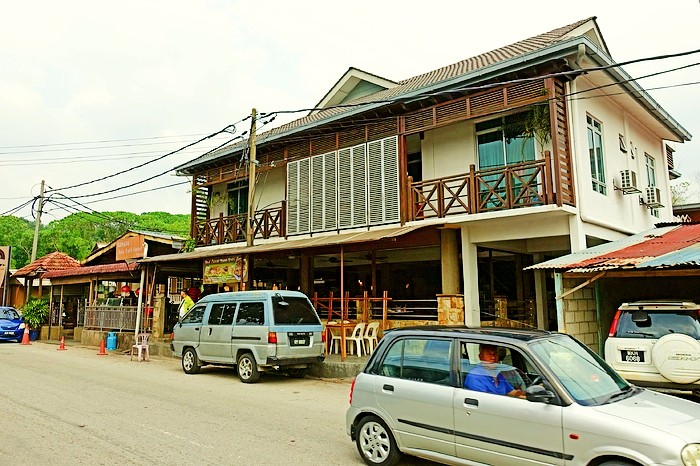 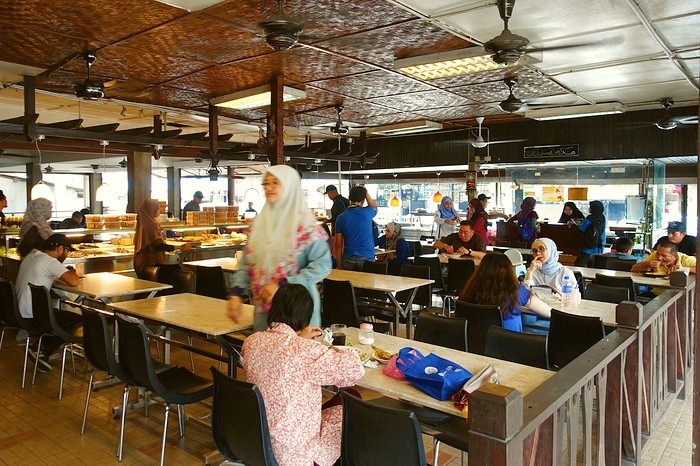 Restoran Anis Putri’s offerings - and which they constantly emphasize - slant towards the North-eastern Malaysian state’s regional cooking style: rich in coconut milk, and with some popular Kelantanese staples like ayam percik, ikan percik, and gulai kawah thrown in. However, I noticed that the flavours have been largely adjusted to cater to the KL Malay palate - much less sweet, and much spicier than Kelantanese preferences. I also didn’t detect the strong galangal, ginger, tamarind and fenugreek flavours that characterise Kelantanese cuisine. As always in popular Malay restaurants, the food on offer are laid out buffet-style - customers bring plates of steamed white rice to which they’d pick and choose side-dishes which they’d pile onto their dinner plates. One then brings one’s plate lunch to the cashier who’d tally up the cost and receive payment, before one brings the food to one’s table. 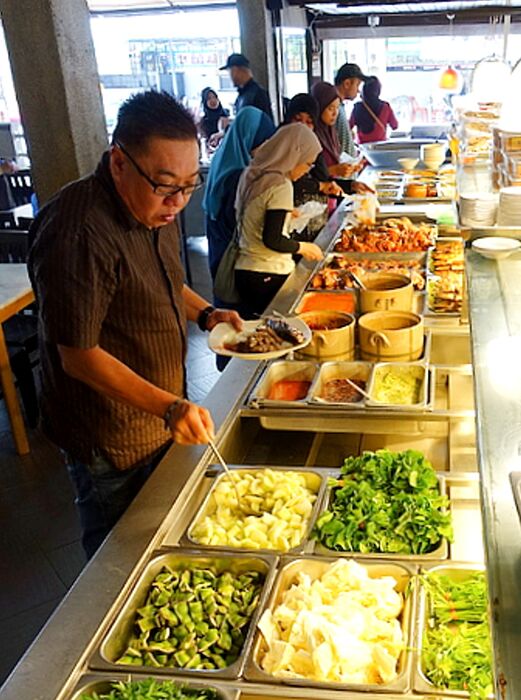 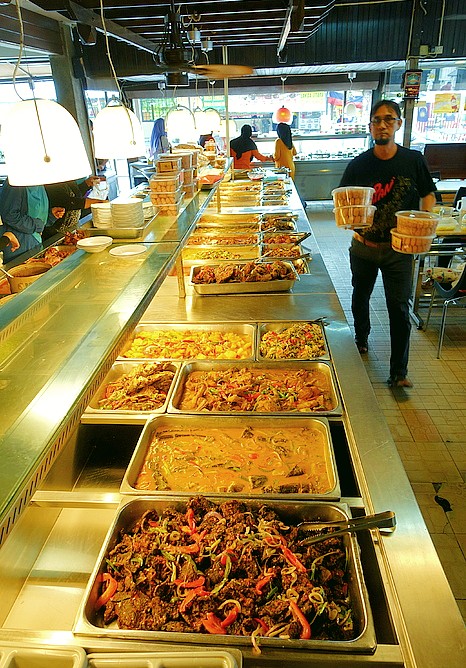 I prefer to put my side-dishes in individual saucers and share with my lunch partner - allowing me to taste and savour the different flavours separately, instead piling all onto one plate. 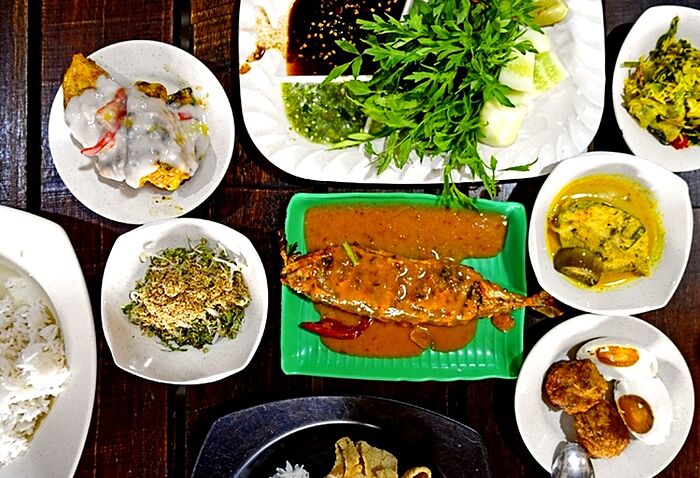 What we had, in order of our preferences:
#1 Gulai kawah (literally “crater beef”, perhaps in references to the huge, crater-like vessel used to cook the beef). I absolutely loved the taste of this curried beef-and-potato dish: mildly spicy, slightly sourish (from the addition of tamarind and tomatoes), and with the beef slivers melt-in-the-mouth tender from long hours of slow-cooking. Do NOT miss this dish if you are there. 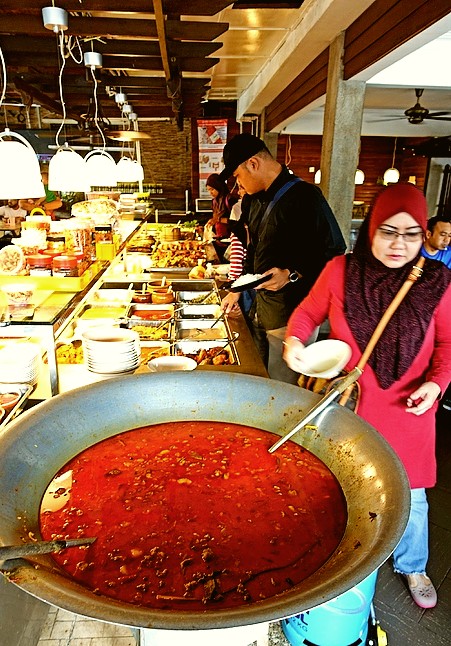 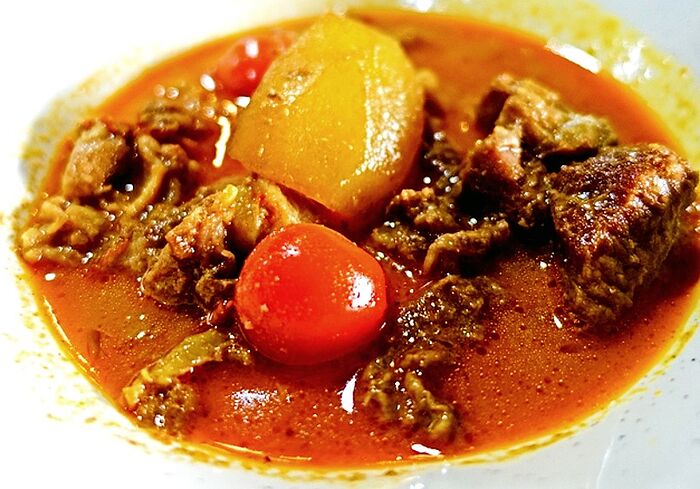 #2 Ayam percik - for a supposedly Kelantanese-owned eatery, I found this dish a tad disappointing. The grilled chicken was cold and tough - cooked for too long and also too long ago. The coconut-galangal gravy, used to baste the chicken and also served on the side, were overly-thickened with cornstarch and had an unpleasant gluey consistency. 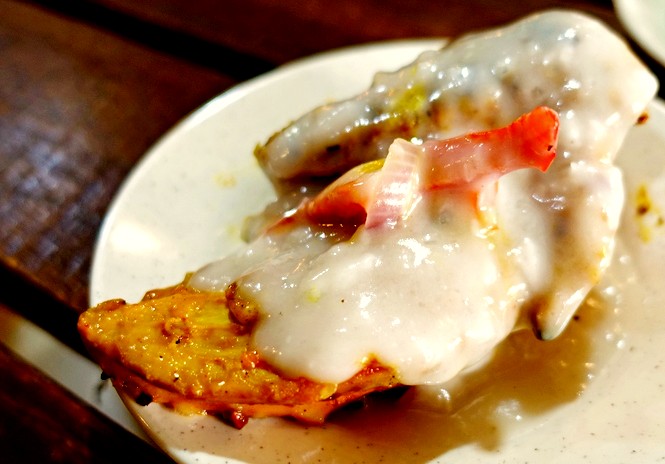 #3 Ikan percik This barbecued fish option - given the same “percik” treatment, fared a better. But fish, when fried or grilled (as in this case), is usually overcooked in Malay cooking. 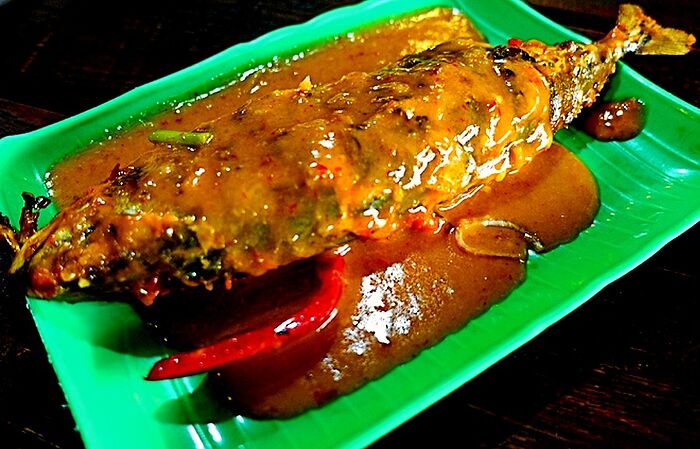 #4 Ikan masak lemak Fish steaks cooked in a turmeric-accented, coconut-rich curry. This is a light, spiced dish with a sourish tang from the use of “asam keping” (dried slices of tamarind), and reminiscent of Thai cooking - Kelantan shares a long border with Thailand and was, in fact, part of old Siam which was ceded to the British under the 1909 Bangkok Treaty (also known as the Anglo-Siamese Treaty) signed by King Chulalongkorn (Rama I) in return for the British Empire to stay out of Siam. 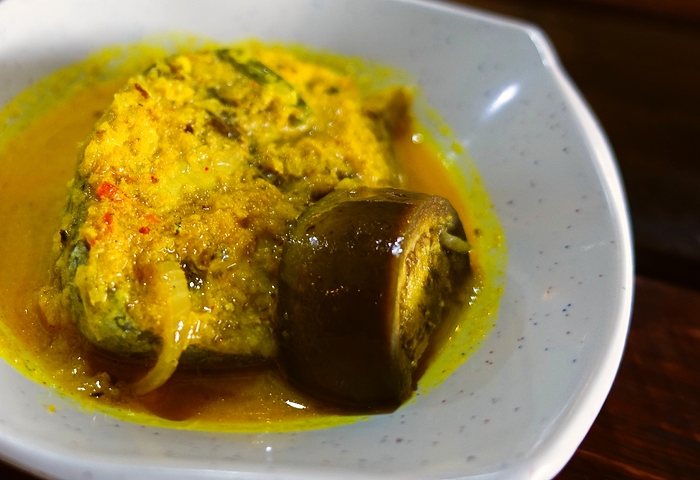 #5 Bergedil (spiced potato croquette) and salted duck’s egg. These are ubiquitous side-dishes in a Malay “nasi campur” (mixed rice) spread which are adapted from other cuisines - the potato croquettes were from Portuguese croquetes (the Portuguese have a long history in this region, having conquered the old Malay kingdom of Malacca and ruled over it from 1511 to 1641), whereas salted duck’s eggs were introduced by the Chinese, who’ve settled in this region for 600 years. 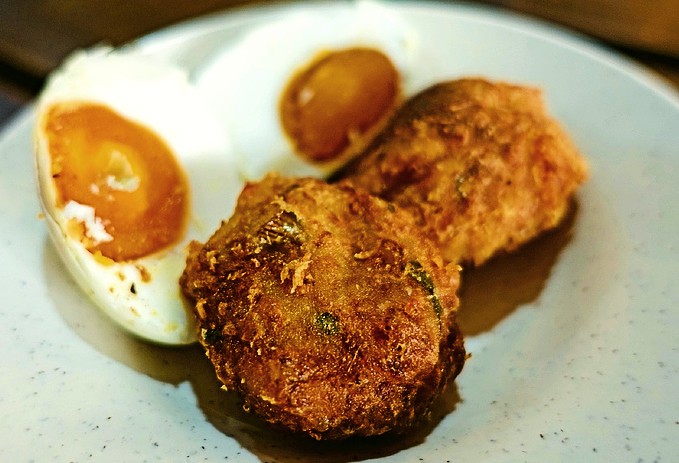 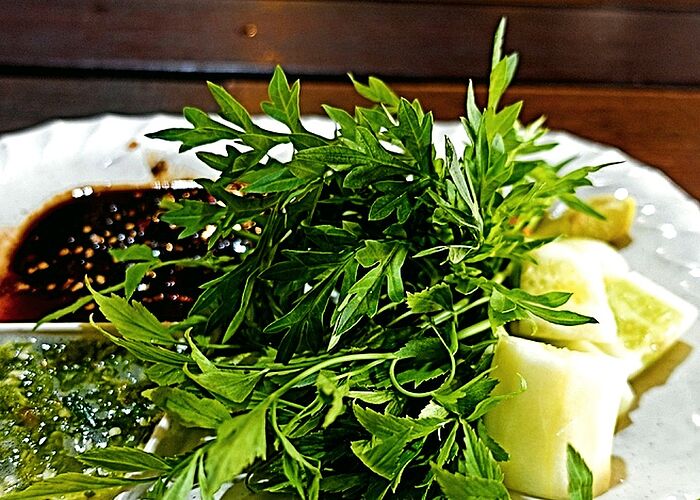 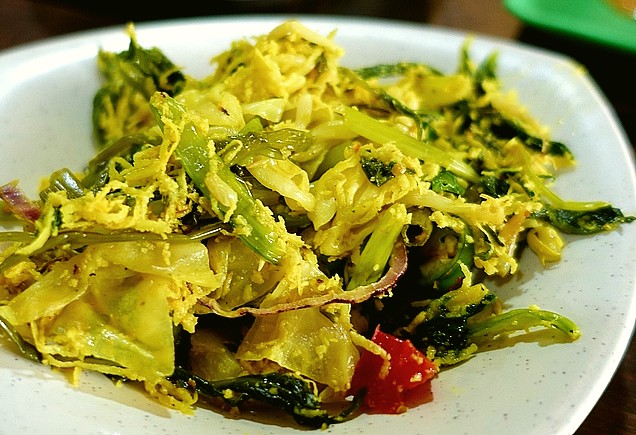 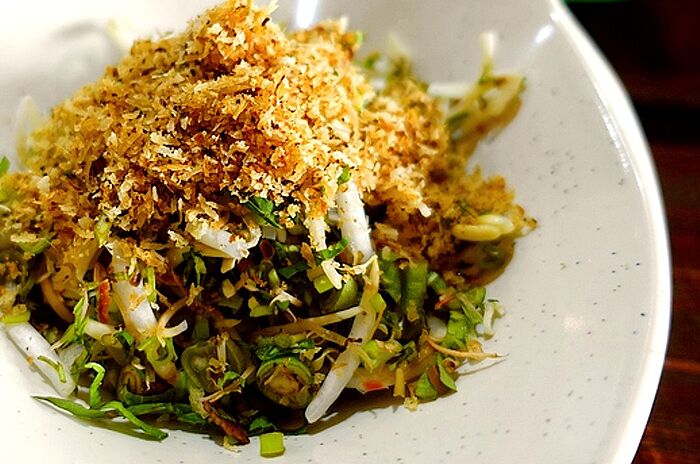 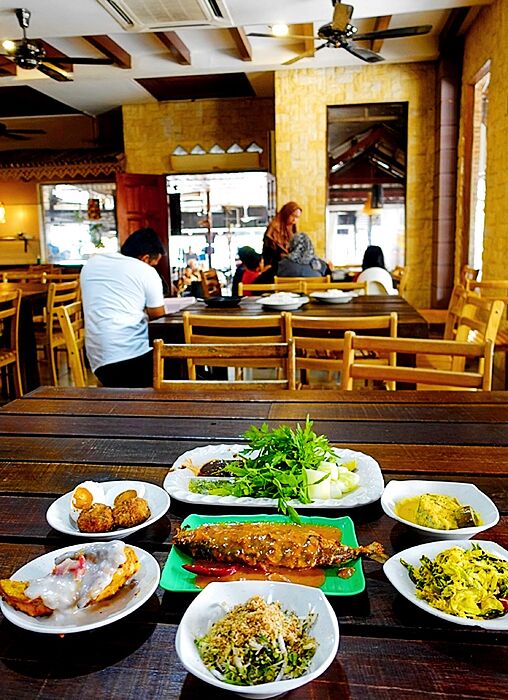 Malay style of serving is very informal - you simply help yourself to how much (or how little - even a mere mouthful) you desire. The cashier will look at your selection and price it accordingly. Most side-dishes range from RM5 (US1.25) to RM10 (US$2.50), so any meal will be pretty affordable. I tend to “over-order” as I wanted to try quite a few dishes, and in most of these restaurants, a full meal for two persons will cost around RM60 (US$15) in all, including soft drinks. As Malay restaurants are halal, no alcohol is available.

Oh yes, I heard so much about it - some Malay friends said it’s got the best nasi dagang they’d ever had in KL. I’ll do it the next time I’m down in KL.

The nasi kerabu is pretty good too. 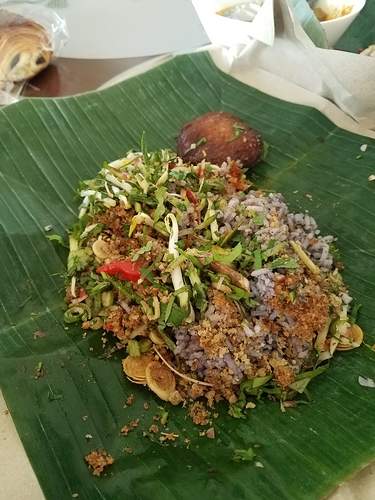