For the uninitiated - the octopus is raw? Or live?

Minor googling:
“Though the octopus is dead, the suction cups on its tentacles are still functional. And strong. I tried to pick up a tentacle with my chopsticks and it nearly took the plate with it. A few deaths by choking are still reported each year from the tentacles latching on to people’s throats, so be sure to chew your food like your life depended on it.” 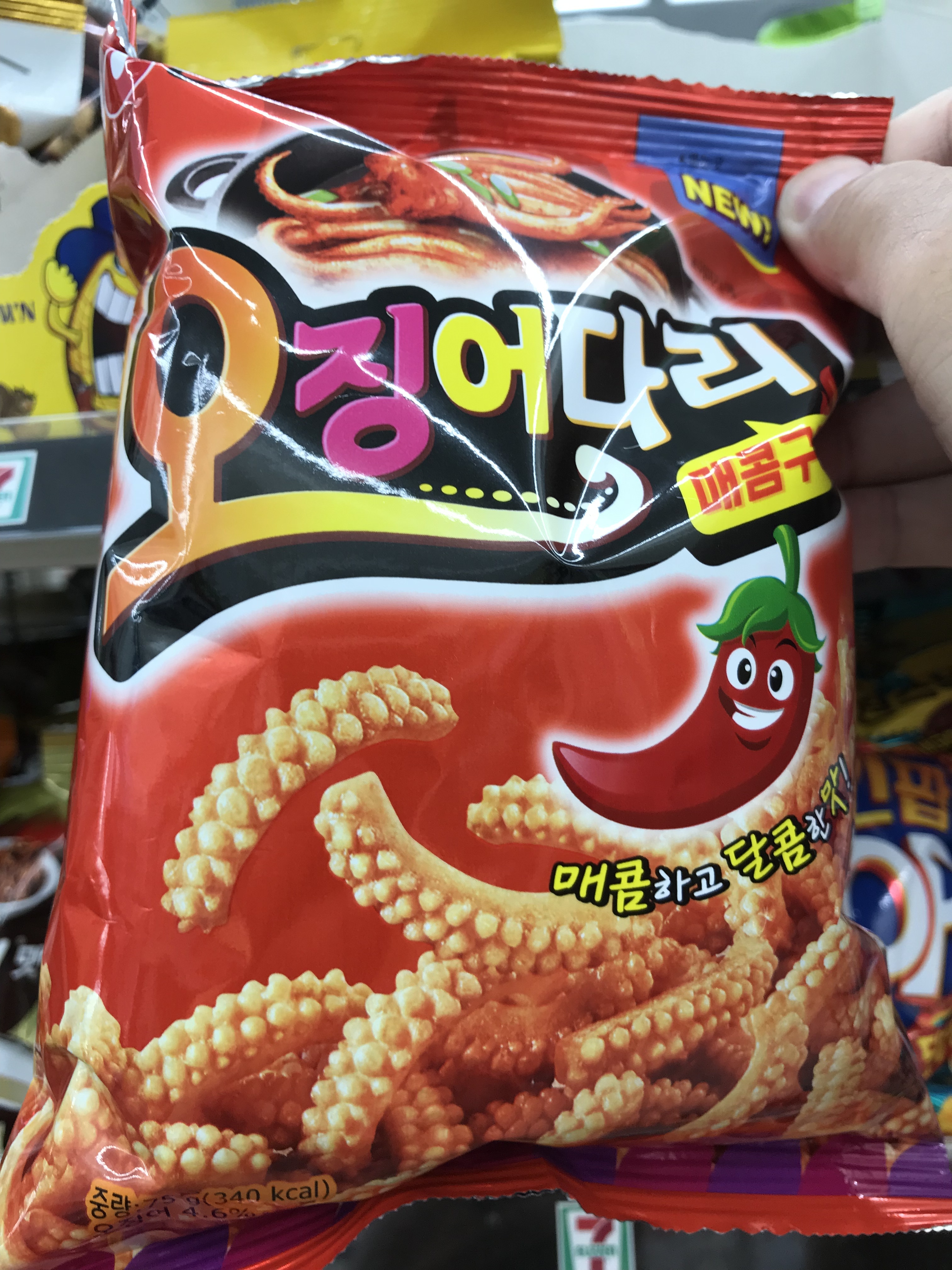 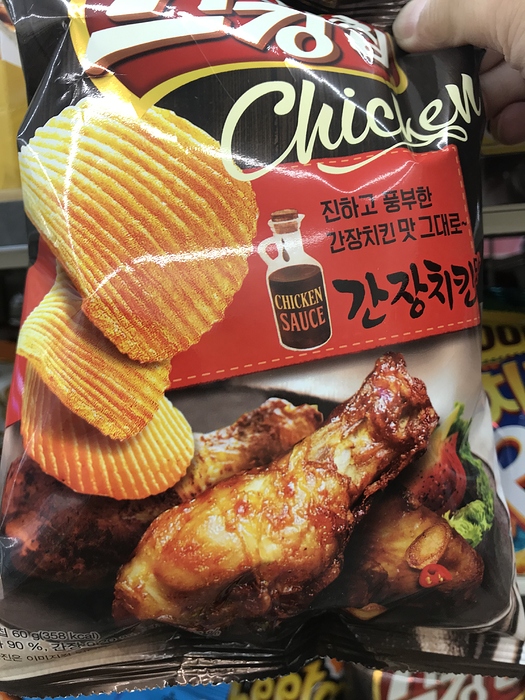 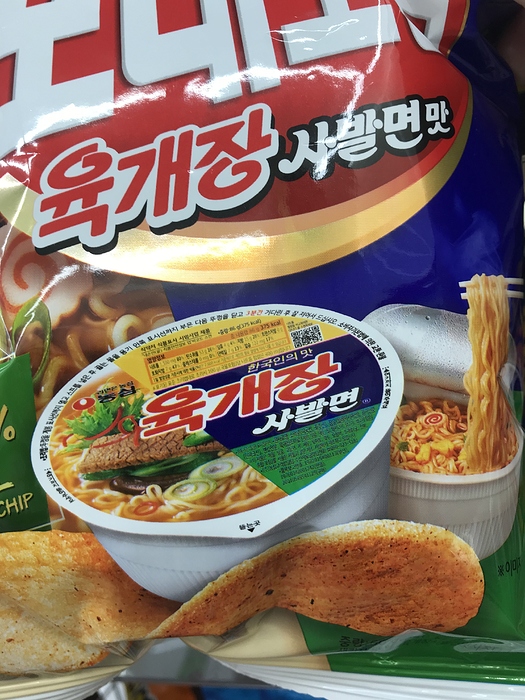 See these venders everywhere dispensing ice cream, yogurt, drinks, what have you. 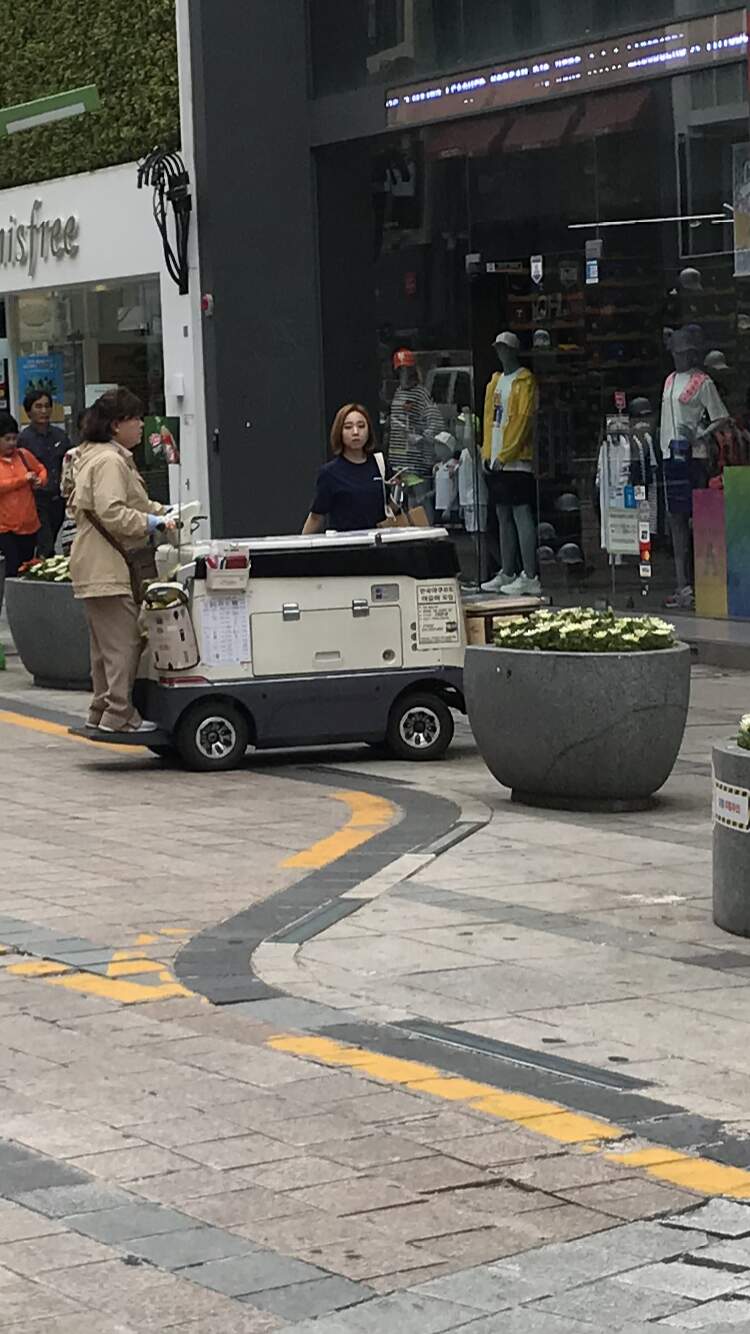 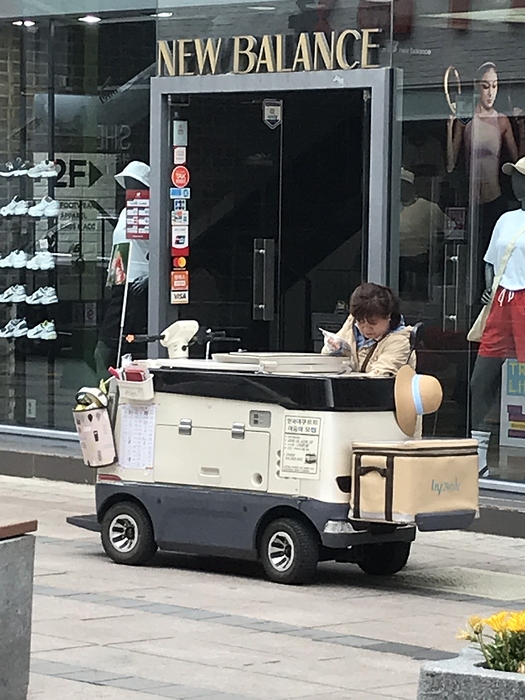 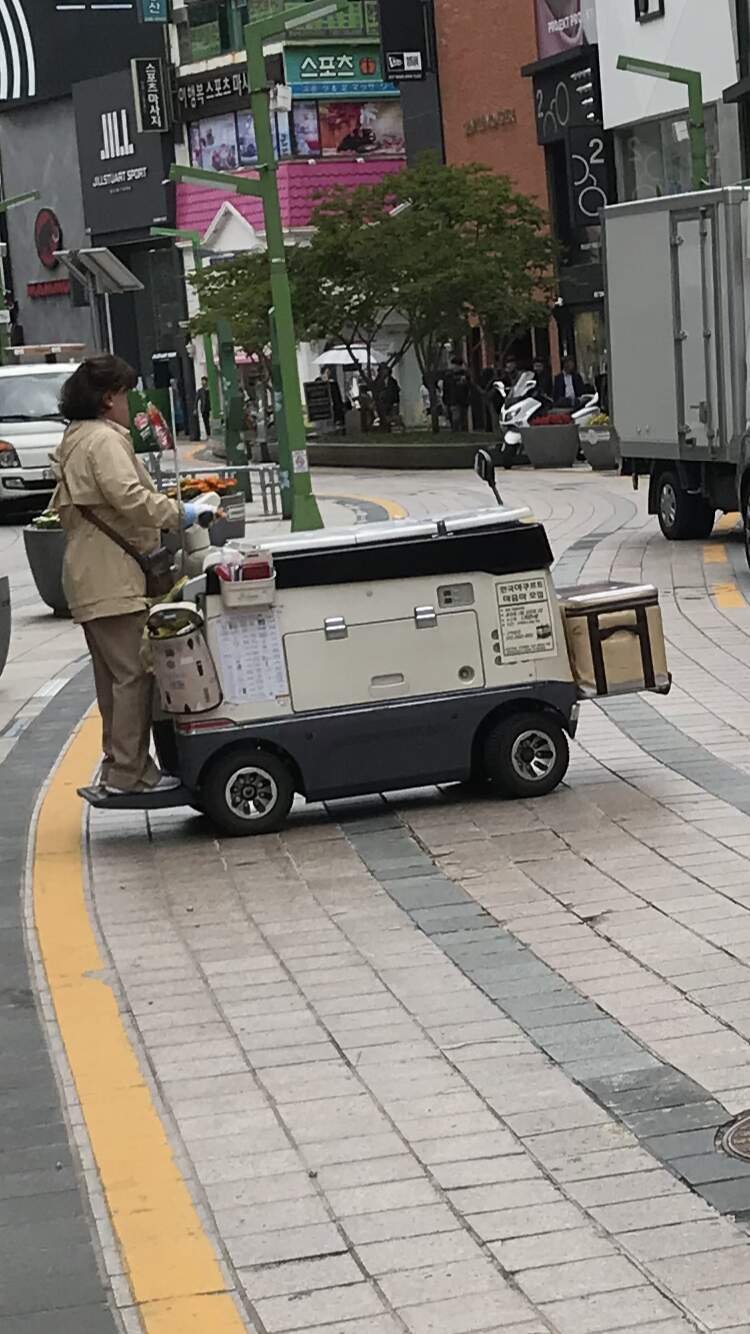 I WANT one! I can see myself tooling up to my campsite with enough ‘vittles for the entire camp. Or take to Costco and go to town! 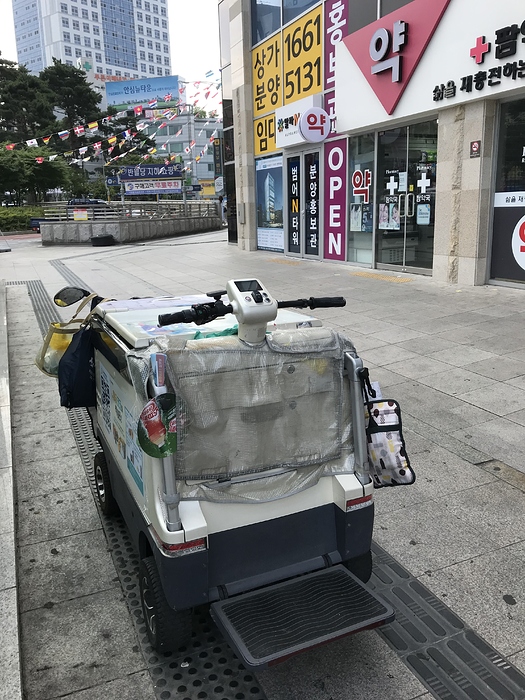 We happened to walk past this Izakaya-like place. The live tanks in front pulled us in. You can tell this is a happenening restaurant by the thoughtfully provided plastic stools for the “wait “. 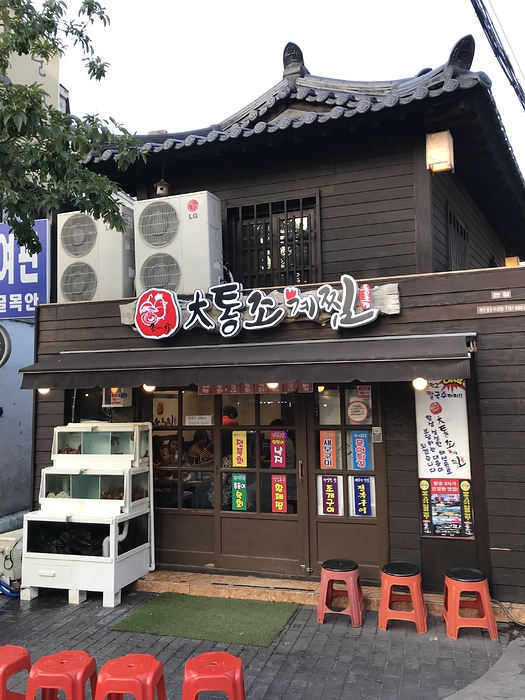 Our dinner set started with an Omelet Roll and a Pancake/Crepe, with some simple Banchan. 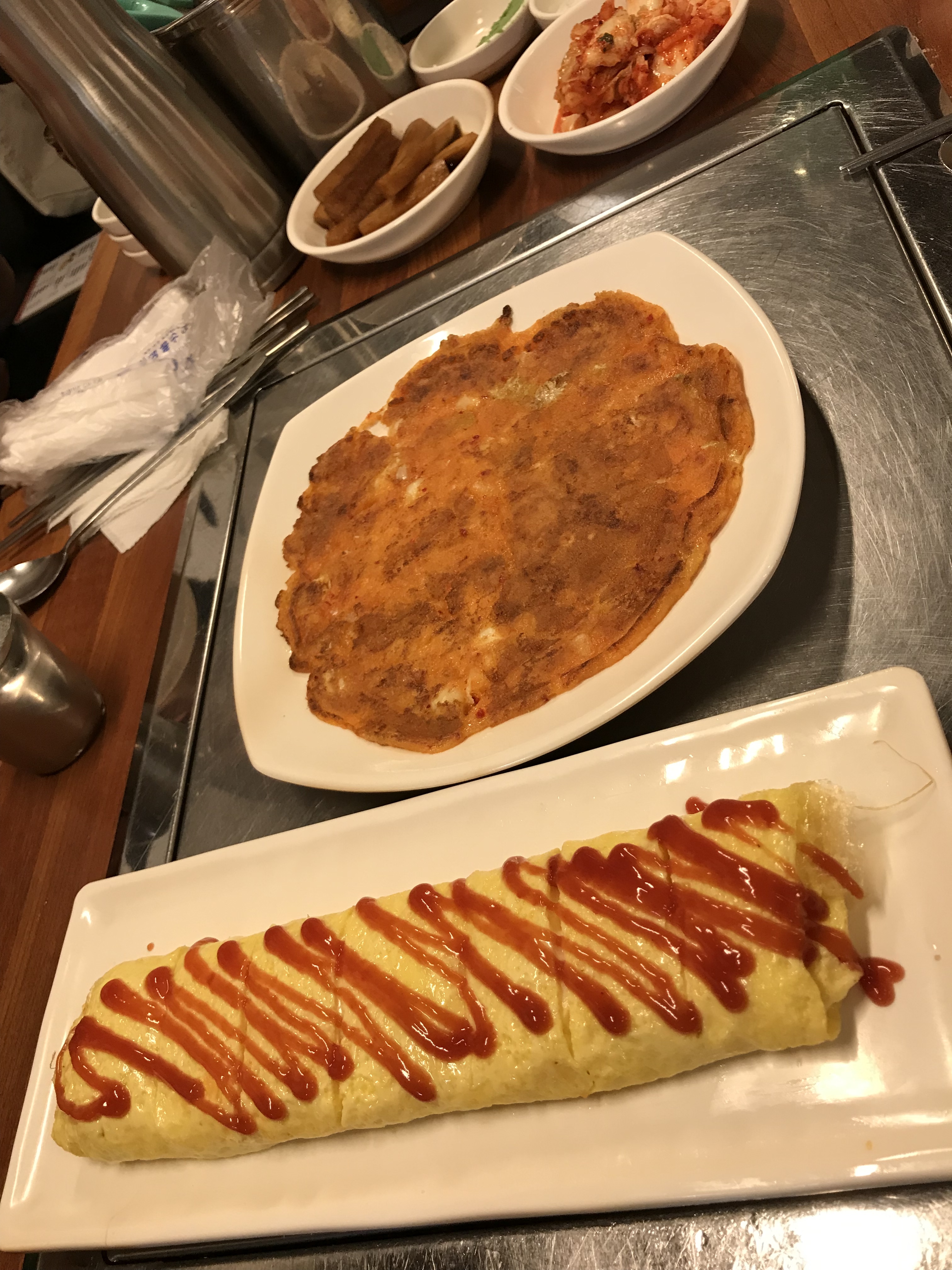 A bountiful harvest of Prawns, Scallops, Abalone, Mussels, Clams swimming in a broth with a Whole Chicken and some Hard Boiled Eggs. 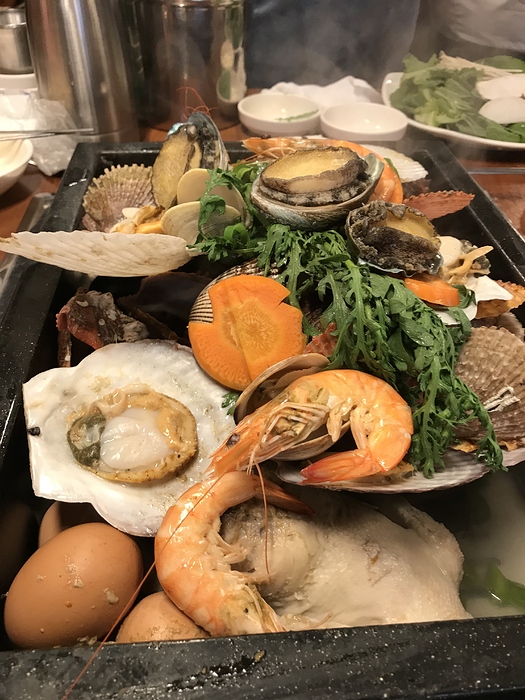 The server fishes out the goodies and cuts into easy to eat morsels the Korean way, with scissors. 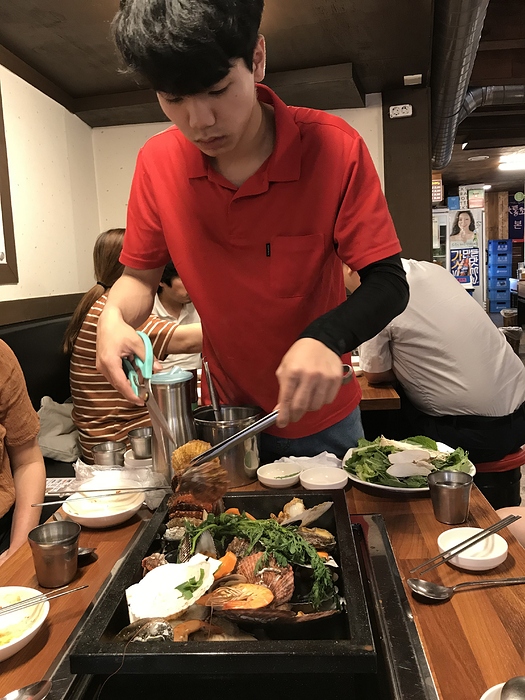 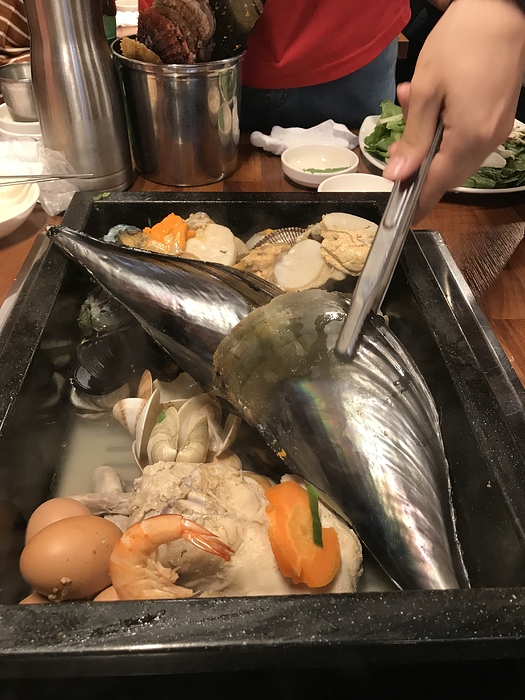 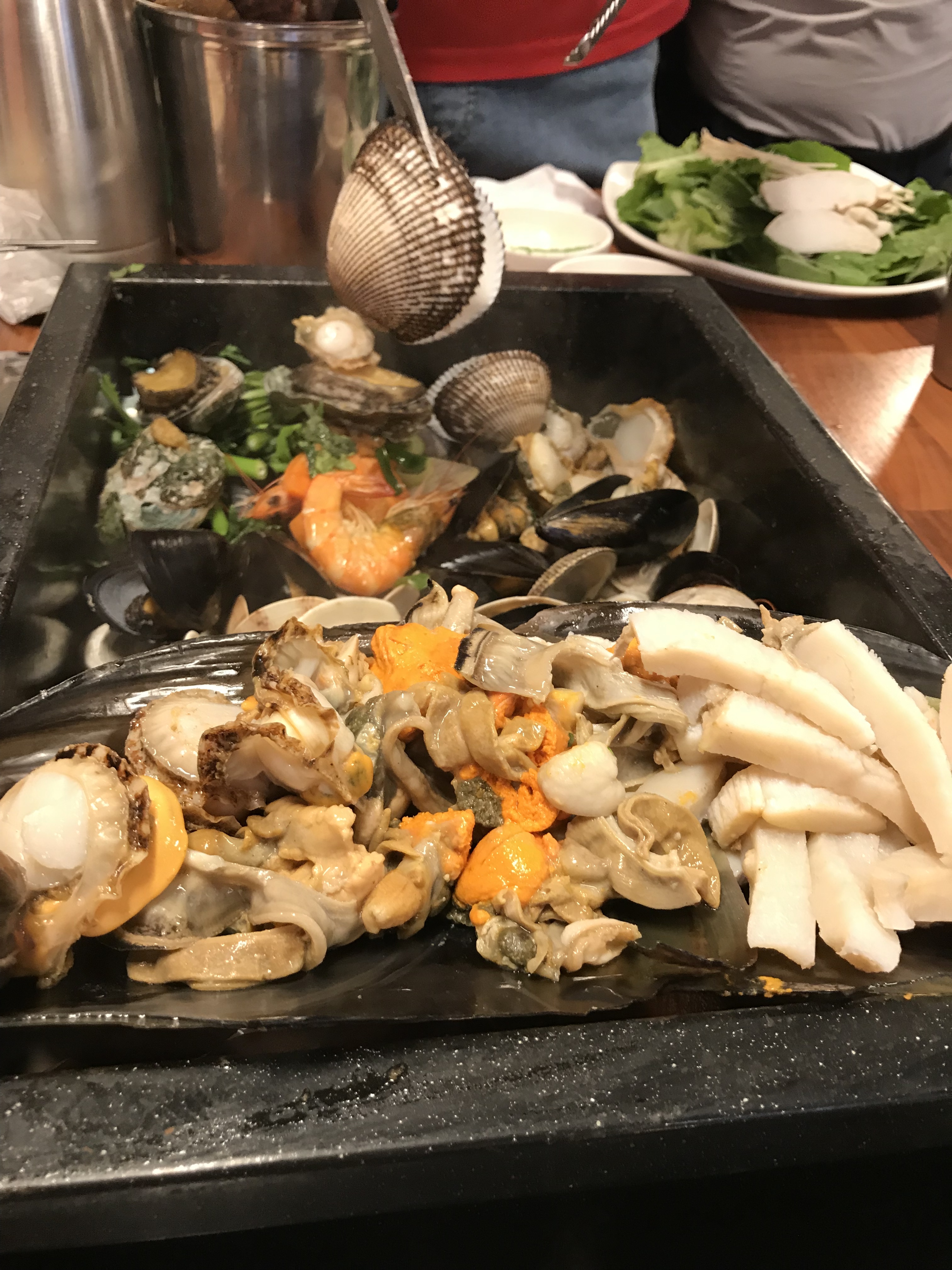 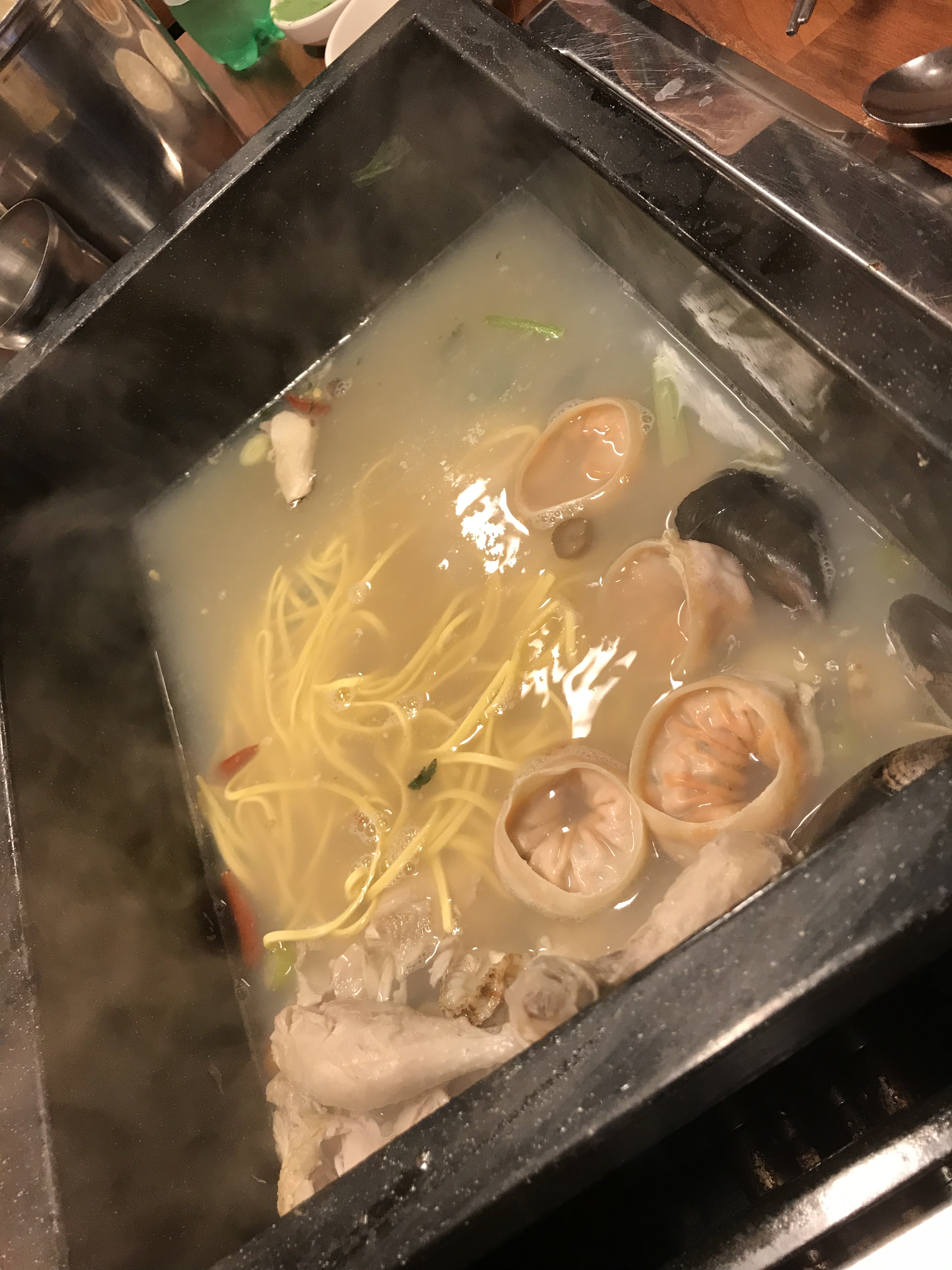 ~ USD$70 for live seafood dinner for six, including Soju, Beer, taxes and service. QPR off the charts.

Armed and loaded for our 12hr flight back to SFO. We never bitch about inflight food. 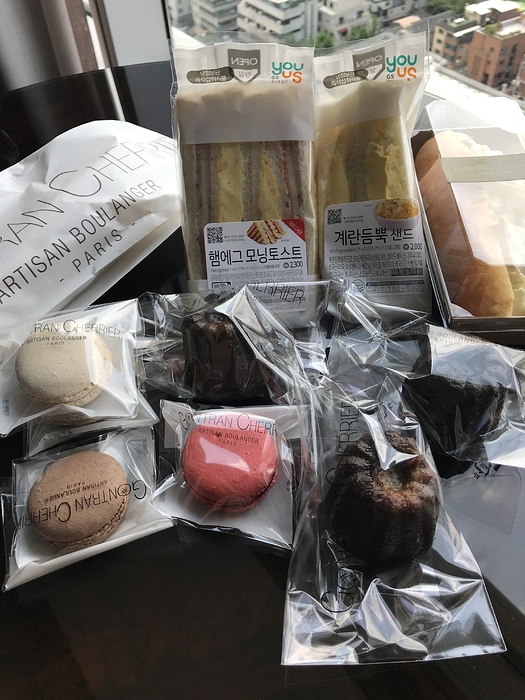 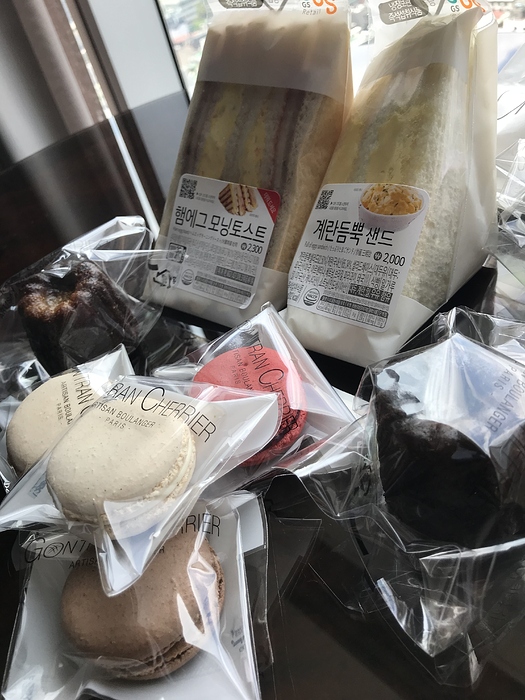 Great preparation! Can you bring this on the plane?!

Thanks so much for bringing us along on your trip. I’ve really enjoyed your posts.

Great preparation! Can you bring this on the plane?!

My dw is the one who worries about starving on any flight (journey) over 3 hours .

In addition to what she “showed” me at the hotel pre-departure. In flight, she retreived a great Potato Sandwich, another Ham/Egg/Everything Sandwich, and various chips and snacks from her mysterious Black Travel Carry On Bag.

We never worry about bringing on solid food upon boarding. Passing through customs at destination is a different story and may present a hiccup.

We sometimes forget about “leftovers” when we deplane at destination, but have not been strip searched in recent memory. Many, many moons ago, some overzealous customs dude in HKG flagged me for a packet (sashet) of salad dressing.

Oh, the horror!!! Ranch dressing has egg or pseudo egg as an ingredient!!!

@digga thanks for your note of enjoyment. Its fun sharing with like-minded folks.

Per @klyeoh Peter’s suggestion, I’ll start a new thread when addressing some especially interesting place. We had a fun time at the Tongin Market in Seoul.

We had a fun time at the Tongin Market in Seoul.

Great report! We’re still deciding between Taiwan, Korea, and Thailand for the return leg of this year’s summer China trip.

(Due to family health issues, we weren’t sure until yesterday if we were going.)

I’ll share this with the others tomorrow. Our 8 year old loves octopus and will be delighted. She had her heart set on a night market in Taipei but maybe this will persuade her otherwise.

I was hoping you’d be going to China again this summer. It’d be very difficult for me to choose between Taiwan and Korea. Both are fantastic to eat and to experience. Both are quite different as well.

Seoul night markets have (grilled) octopus on skewers. You can eat any part of the animals in Taipei/Taiwan. Can’t go wrong wherever you end up going. (I think it’s more important that the kiddo is happy)

My mouth is watering thinking about Korea and Taiwan. 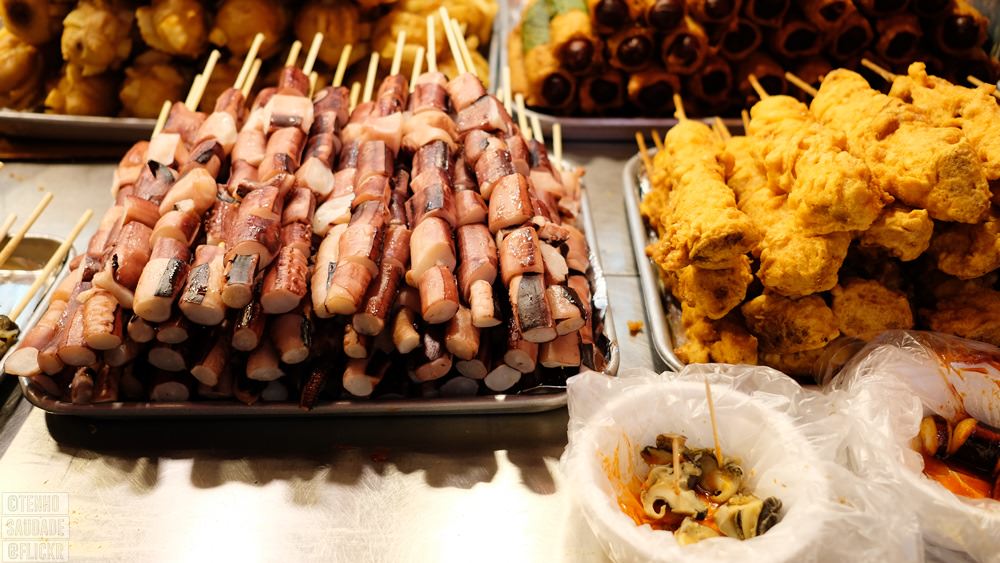 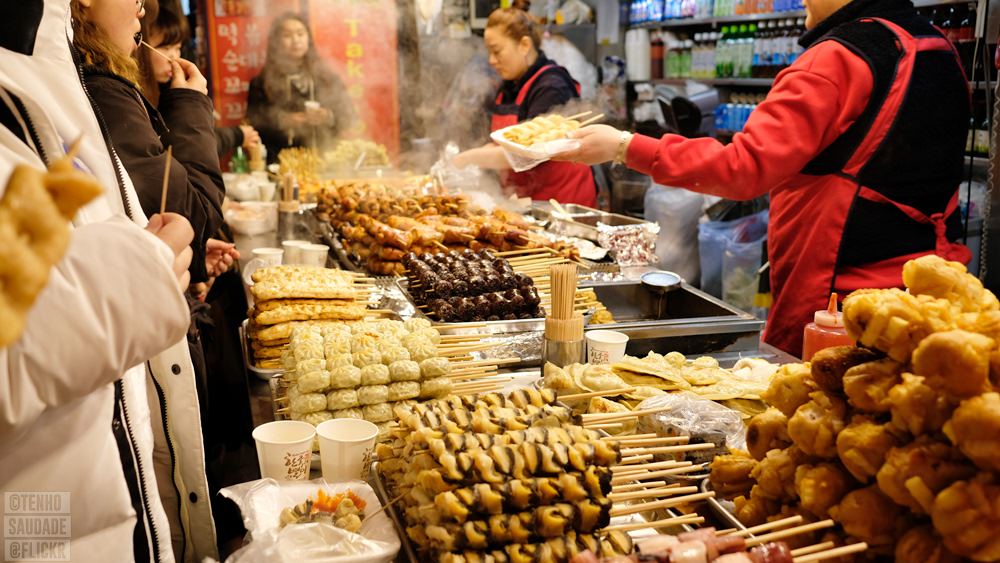 Ginseng Chicken Soup is a classic must have when in Korea.

Ginseng is not a taste I particularly die for, but “when in Rome”…

Did the ginseng chicken you ate in this place made you change your mind towards this dish? I really hate ginseng or medical root in Chinese cooking, I disliked this even in high end place when well made. Normally I think I’m going to skip this, but I know at times a well made dish can make you change your mind. Are you conquered by this dish? Thx.

Did the ginseng chicken you ate in this place made you change your mind towards this dish? I really hate ginseng or medical root in Chinese cooking…

Since my parents and grandparents are no longer around to cook and force me to consume, the medicinal soups have somehow morphed into comfort food. A few years ago, I started stocking up on these ingredients from Chinatown and regularly make soup with them. Even have cooked ginseng soup twice.

I’d had Ginseng Chicken Soup in Korea about 20 years ago. I recall being surprised that the dish was actually palatable and not hating it. Fast forward 20 years. I was glad and happy to try Ginseng chicken soup again, it’s such an iconic Korean dish. I wanted my nieces and in-laws to experience it.

We had a fun meal. Everyone started with a complimentary small tea cup of Ginseng Liquor, tasted a little alcoholic. The soup and chicken was not obnoxiously bitter, actually barely any discernible nasty Ginseng bite. Pretty much as I recall from my only other try.

If you hadn’t had before, I think you might consider it. @digga had also been to the same restaurant and had put a name to place.

My friend gave me some ginseng tea a few years ago, they are still in the cupboard, I’ve tried once or twice. Didn’t like it.

I had some dong quai chicken (Traditional Herbs Soy Sauce Chicken 天 一 養 生 雞/ 當 歸 黃 芪 黨 參 川 芎… 豉 油 雞. With dong guai, etc.) at Tasting Court. With the “25 year hua diao” with Steamed Fresh Flowery Crab with Aged Shaoxing Wine & Red Yeast Rice Noodle. Everybody love this restaurant, but I can only give a B- because those 2 dishes ruin otherwise a delicious meal. I think I dislike a certain type of bitterness. Asian medical herbal soup isn’t my cup of tea at all.

Which restaurant was that?

We came across one today. But husband was a bit sick, we wait for a later meal, I searched online, there seem to have a fake ginseng chicken soup restaurant. 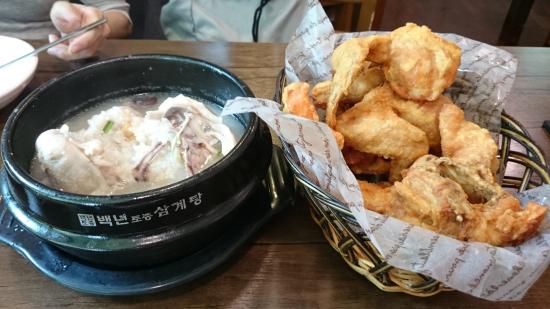 When I was in front of the restaurant,I causally checked the Michelin site, it was another address. 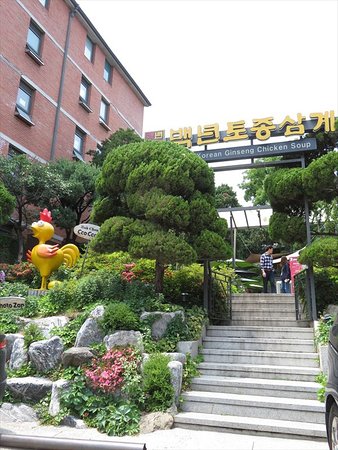 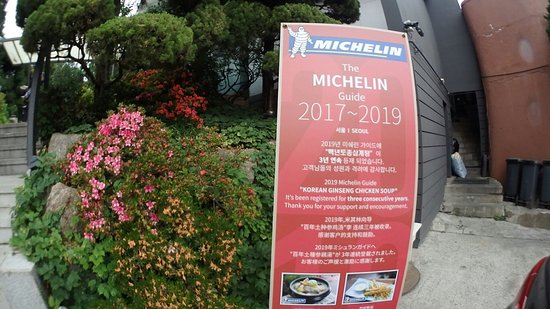 Which restaurant was that?

Don’t know about you, but I found navigating Korea a bit more challenging than most other Asian countries. Many signs are only written in Korean, some in Chinese, rarely any in English. Google maps will show you the place on the map, but no walking directions. That said, we did manage to go to all the places we planned with minimal fuss.

Subway : Take the subway line 3 and get off @ Gyeongbokgung station and exit through

120 meters towards Hyoja-dong direction. You will past “popoyes”, then look for GS25

turn into the small lane at the corner of this store, you will see Toksochon.

Here’s a blog entry regarding this place: 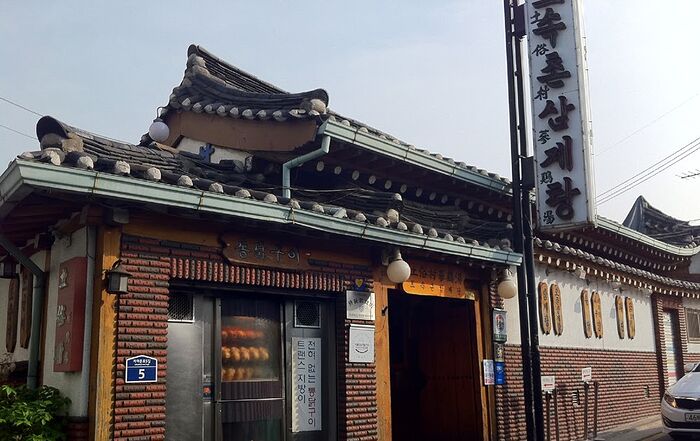 Best traditional korean restaurant - Toksochon , very famous and "must eat" place if you ever visit Seoul! This restaurant was also frequent...

Here’s their biz card I collected. Can’t read a word of Korean, matched the phone number to the one above.

Thanks, it was the same a HK friend mentioned.

Don’t know about you, but I found navigating Korea a bit more challenging than most other Asian countries. Many signs are only written in Korean, some in Chinese, rarely any in English. Google maps will show you the place on the map, but no walking directions. That said, we did manage to go to all the places we planned with minimal fuss.