Stopped by Kind Burger in Fair Haven for lunch today. It’s a rather plain store front next to a barber shop and across from the Acme in Fair Haven: 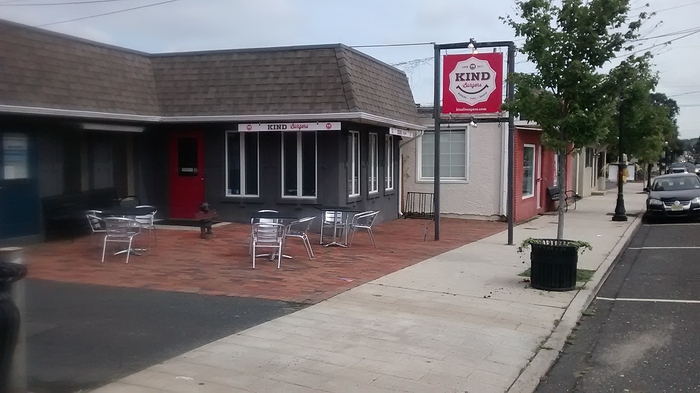 The interior is also pretty basic. You order at the counter and they bring the food to you. Service was reasonably prompt considering I was the first person there today, but people who arrived a few minutes later got their food much faster.

All the burgers are fresh, they have a number of choices including Angus, Kobe, Chicken, Portobello and veggie. 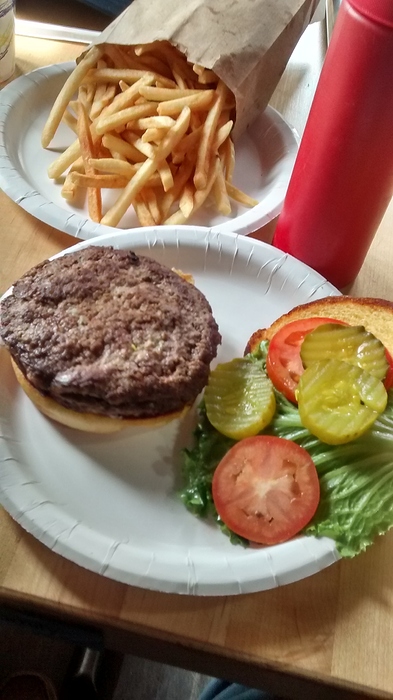 The burger was good. It arrived on a potato roll with fresh red leaf lettuce, tomato, pickle, red onion, mayo and mustard (Dijon). It had a nice char, was reasonably juicy and tasted home made.

The fries however were a bit of a disappointment. The portion size was generous and could have served two or three easily. They were served in a small brown paper bag, which was a clever touch. But the fries themselves were frozen shoestrings, so nothing special. It would have been better with a smaller portion of hand cut fries, and more in keeping with what they appear to be trying for.

They also don’t have an ice maker, so the plain water I ordered was really plain. Our water around here is just does not taste well this time of year, and also eats toilets, so it could have used some chillin to hold down the funk.

Overall at $12.30 with tax I would not characterize this as a great value , but that was mostly due to the sub par fries.

They also have a variety of dogs, chikn fingers, cole slaw, baked beans and shakes, which is nice to see on a fast foodish kind of menu.

I would consider going back for the burger, but probably not in a big hurry since Barnacles is just down the road…

Is that next door to the fish market? (name escapes me) I’m glad you enjoyed but that patty just looks sad to me. lol Don’t know how else to describe it. Not a big fan of the burger on a potato roll either, since I rarely eat burgers looks like I’ll just skip the depressed patty burgers here.

Yeah patty does look sad but that could be just my crappy low res phone cam. It tasted ok, but Barnacles, Pour House and Oyster Point all put out a much better burger around here, and even the Brothers burger is a little better. There is something to be said for a little girth on a burger.

Still if you don’t try you will never know.

I go there once in a while (I live in FH) but a more fair comparison would be to Five Guys, not any one of the other places (or type of burger) referenced here. If that’s what you’re looking for it’s not a bad option.

The absolutely worst burger I ever had was at the Five Guys in Manalapan. And the fries we horrible as well.

What is across the street where Lil masters used to be?

What is across the street where Lil masters used to be?

I think it’s Tavalo Pronto, which is an Italian deli that is supposed to be good:

I haven’t tried them yet but they are on my list.

Man I have to post about a recent Italian masterpiece I had locally. What an experience. I might post it in my ridiculous food thread. Give me a few to think about it lol.

Tavolo is across the street…fantastic place…great specials and salads. I mostly do takeout but once in a while will go down on Thurs/Fri they put tablecloths out and we do BYO.

In the Acme plaza, Lil Masters was replaced by short lived Cravin Haven, which was then replaced by Seed to Sprout, a vegan restaurant.

replaced by Seed to Sprout, a vegan restaurant.

To quote Dr. Not, eeeuwww !

Yeah definitely not my cup of tea but someone must be eating the stuff, I think the one on Red Bank (across from the Globe) does ok and this one has 2 locations (they are also in Avon I think).

As much as I am the antithesis of a vegan, I will tell you there is a restaurant in Matawan called The Loving Hut which is vegan and I have enjoyed a few meals there. One of my employees is vegan so I’ve taken her there a few times and I’ve got to say I was shocked at how good their fake meat & seafood can be.

Here’s my rule: if there are quotation marks around an ingredient, I’m out. “Meat” ISN’T meat. “Chicken” ISN’T chicken, etc. I eat more than my fair share of veggies every day and have nothing against the vegetarians and vegans, but you’re either willing to eat MEAT or you’re not. “Tastes like chicken” is a line designed to get laughs, after all!

antithesis of a vegan 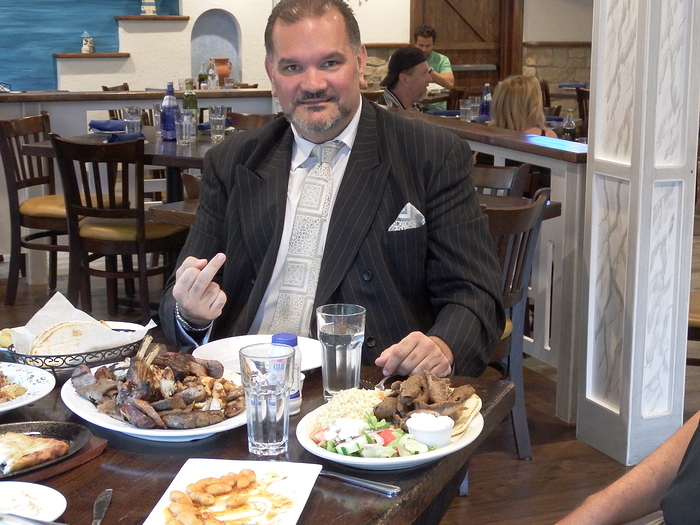 Seen recently on America’s Got Talent, The Carnivore Edition !

Can I make this picture my avatar?

For the record and to keep things in context, that is not a “General FU”, that was a very specific bird for @corvette_johnny who started the now infamous “mixed grill challenge” but didn’t show up for the actual event. Jr. loves and respects his fellow HO’s.

I thought I was asking you JR, about the photo … sorry

lol it’s the public domain now! You have my blessings!