I posted about Kimchi Mama coming to AP in the NJ Food News thread, but today I had a chance to have lunch there… I’m really excited to have another ethnic food option here in AP! As the owner said "There is a lot of pizza here.

The two of us weren’t shy about over-ordering

so we got a small order of Korean Chicken Wings w spicy sauce, the Bulgogi Hot Stone Bowl, and the regular size order of Japchae (vs. the Bop version-more on that in a minute), which are glass noodles made from sweet potatoes. I’ll start by saying this is day 3 that they’ve been open, and while I generally don’t go to places that soon, I was THAT excited to have it in the neighborhood.

The owner kindly brought us complimentary bowls of some of the tastiest Miso soup I’ve ever had, along with a serving of kimchi that still had some crunch to it (a + imo), and a small ‘salad/slaw’ that was also delicious. Great start to the meal! 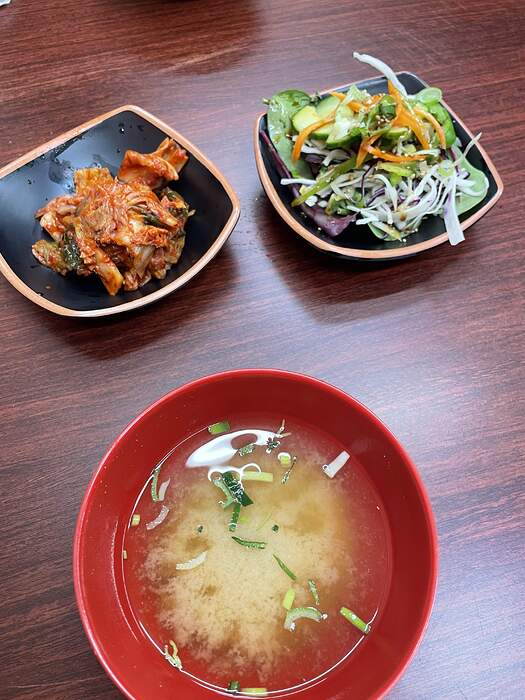 The wings are FANTASTIC. Could likely have polished off the entire plate by myself if we didn’t have the rest in front of us! The next time I go I’ll ask for them to come out on their own, as you want to eat them when they’re hot without any distractions! The sauce wasn’t super spicy (not a complaint, just a surprise), but it was yummy. 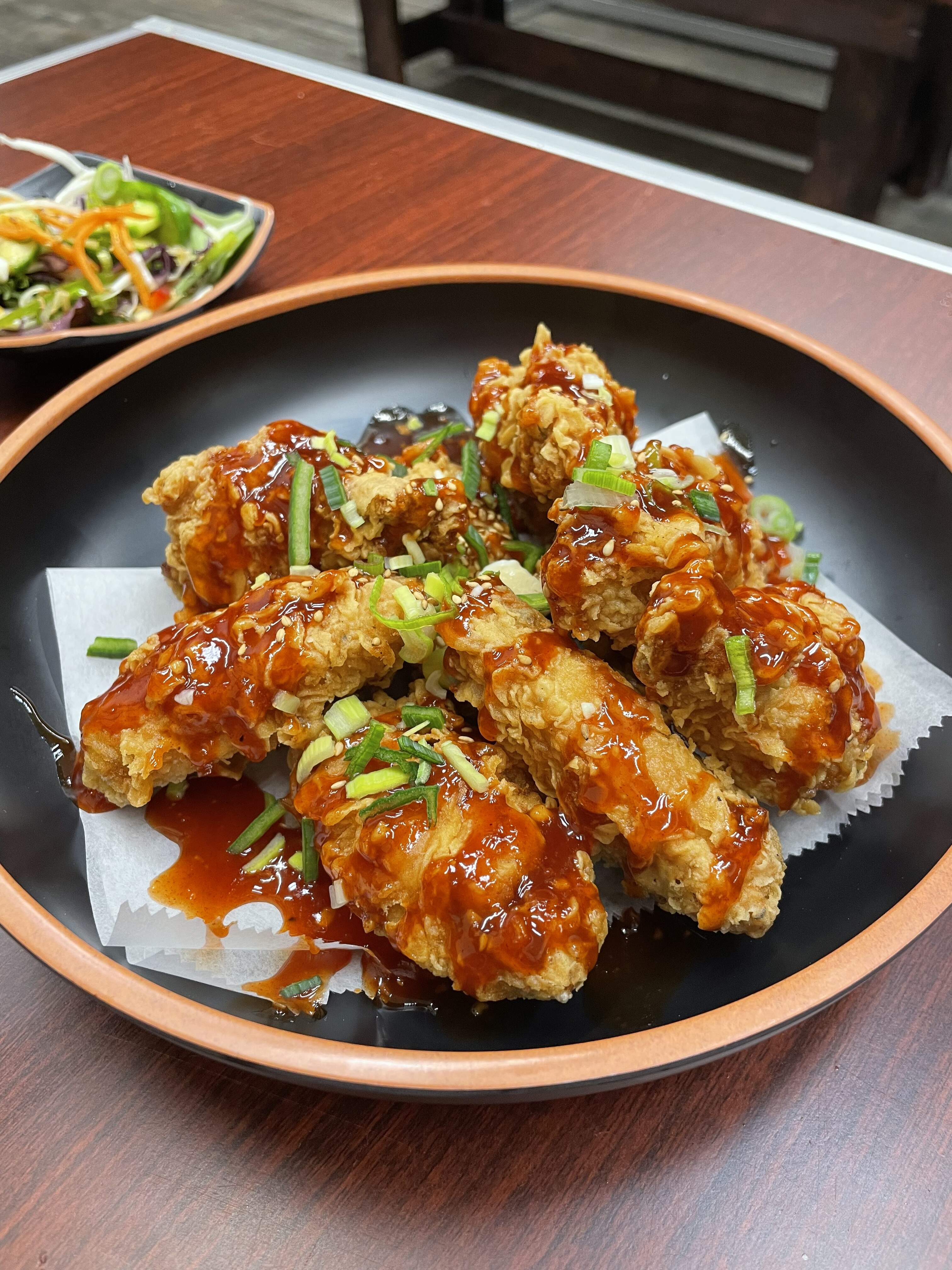 The stone bowl didn’t disappoint either…the soccarat (NO clue what they call it in Korea, so that’s my reference point) formed beautifully and the bowl remained hot a lot longer than I expected. Bulgogi had great flavor. 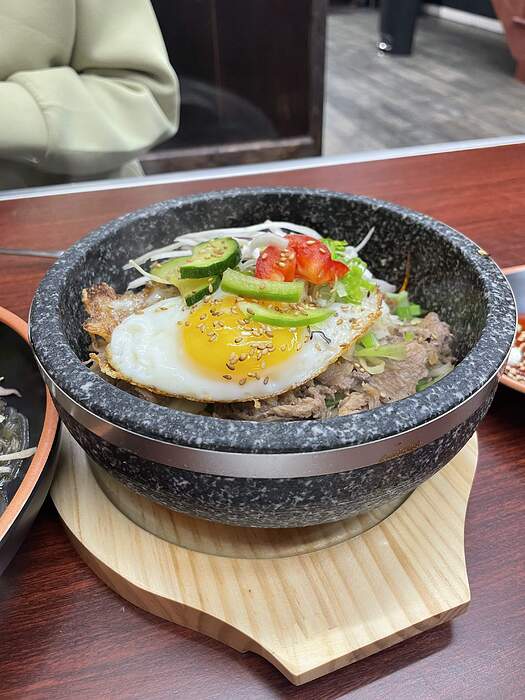 The Japchae wasn’t a disappointment by any stretch, but it’s really difficult to eat! We were both using chopsticks but even with plastic forks, it was nearly impossible to separate the clumps of noodles - and there were a TON of them! That said, I had a 2nd serving and have the leftovers, which I may have with eggs tomorrow morning. I believe my comment was “this should be eaten at home, alone, on your couch.” There was just no ‘pretty’ way to eat it without shoveling a huge mass of it in my mouth, but I managed.! TG I was there with a friend who eats and doesn’t care about that stuff! 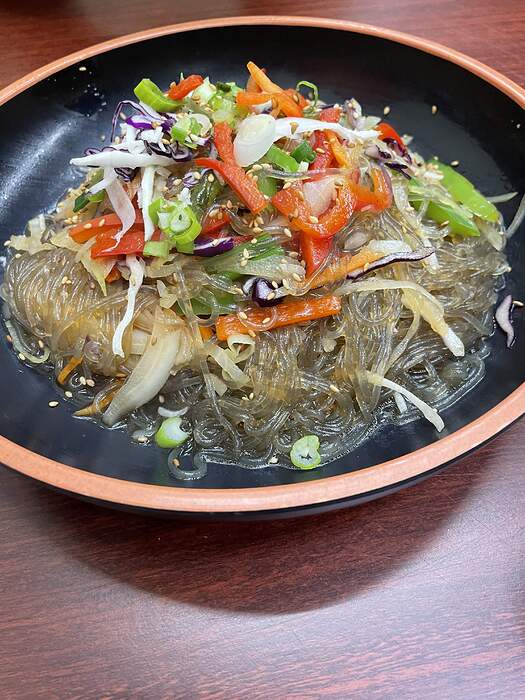 We got the lowdown on the Bop menu items vs. regular portions, as there is a lot of crossover on the menu between the two sections. Bop means rice, and their Bop versions come in cups. We agreed that we didn’t need potato noodles over rice, but I can see how that could be some good late-night eats! (Aside: I’ve seen it as bap, as in bibimbap and will ask the owner about the difference next time I’m there, because I’m a #wordnerd.)

This place is VERY casual, but the tables and booths are large (I’m guessing in total there are seats for 20-25 people). Street parking on Main (no meters) or one of the side streets (meters, depending on the street) was easy. Do NOT park in the parking lot next to the KM building though, or you’ll be towed.

Excited to try it out. Thanks for the write up.

the soccarat (NO clue what they call it in Korea,

Boston HO butting in…It’s called “nurungi” in Korean and it is the same as soccarat so you were accurate with your description. Many cultures value this scorched rice. I love it - so good.

I really hope they make the Jopchae with gluten free soy sauce.

TY! That’s where these boards are helpful!

I second everything @CurlzNJ said. I did have a wing for “dessert” and so it had been sitting for a while and was no longer just out of the fryer hot. It was still very crispy and very delicious.

Since Mr Bean could not make it to lunch I brought him some of the Yumi-Bokki (Dukbokki) which was a sort of stew with rice cakes, fish cakes and vegetables stir fried in sweet and spicy Korean pepper sauce. It had a really nice heat with the right of sweetness . 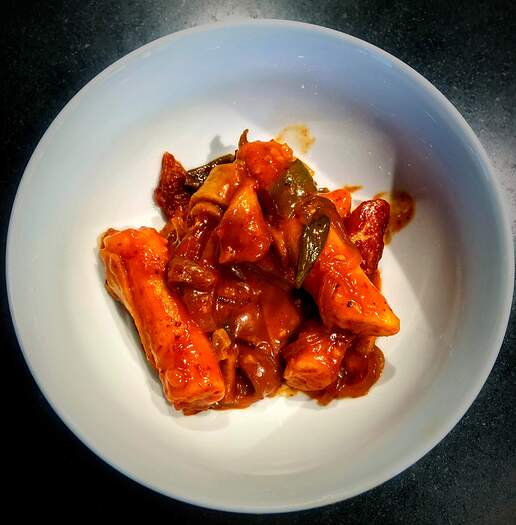 And because it seemed interesting, though not traditionally Korean, their Shaken Shake Steamed Seafood special. I went with the crawfish version because you don’t often see crawfish locally. The seafood came in three spice levels (mild, hot, extra hot) and I don’t remember what I ordered but what we had was HOT. I loved it but it was a little intense for Mr Bean. 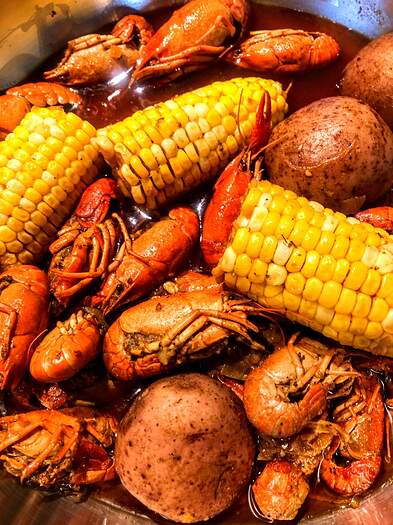 I plan on visiting often before Memorial Day as I have a feeling the place will be hopping all summer.

How much did the crawfish run you? I’m a traditionalist when it comes to crawfish and have reservations about trying this type of preparation but may finally have to cave and give it a shot

I have no traditional experience to compare them to but I thought the crawfish were really good. The order $17. They also had lobster, crab, head-on or head-off shrimp, and mussels at different prices.

Wow! What a writeup! Those wings!!! Sorry I missed it but if you are interested in round two, I want to join.

Here is where you can see Kimchi Mama's full menu

I forgot to mention that when she brought us the hot stone pot, the owner also delivered a pair of metal spoons so we could properly scrape the nurungi (TY @digga!)… she kept apologizing for things that aren’t fully ready/done/available, and we kept saying we understood. They’ve only been open a few days!

Let me know when you plan on visiting again. I love Korean food! I visited there during the Olympics, and really enjoyed all the food I ate. I am a big kimchi fan!

My Mom’s 91st birthday is Saturday, and we are going to take her to dinner at Kimchi Mama.

She doesn’t walk any distance, so typically we bring a wheelchair. Is the restaurant wheelchair accessible? And is there on street parking, or a lot?

My brother-m-;aw will probably also be joining us. What would you recommend for a totally non-adventurous eater, who won’t even eat chinese food?

Also, is it primarily takeout? There would be 6 of us, and I don’t know if there is seating.

I was there for lunch on a Friday and we parked on the street around the corner. It wasn’t far and as I recall should be wheel chair navigable. You can definitely dine-in but is not all a fine dining experience. You order at the register and while the owner brought us our food, you may have to pick up yourself. There are several large booths and I think there were a few standalone tables but I am not sure. The spacing was nice between tables.

I just looked over the menu. Do you think your BIL might eat the wings without sauce? While the sauce was really good I bet the wings would be great unadorned. Maybe one of the katsus - “Thin filets that have been breaded with panko and lightly fried. Served with our famous Katsu sauce on the side”. They come in chicken, pork and fish varieties.

Tagging @CurlzNJ for her thoughts.

Hmm. My first thought was I’m not sure if this is the right spot for Mom’s birthday, and that’s for all of the reasons @MsBean mentioned + your BIL! The lot next to the restaurant is NOT for the restaurant, but you could likely pull in there to get your mom and her chair out. I’ll try to take a ride over there to see, but you might also call and ask them if there’s a step in (I don’t remember one). Street parking generally isn’t an issue, and the AP Municipal lot is diagonally across the street–just don’t forget to feed the meter (the app is the best way)!

Think old-school pizzeria for decor/vibe, including the inexpensive paper napkins. That’s not a shot at the restaurant-it’s just how it was when I was there. Also no clue how busy it will be on Sat (night, I assume), but from what I’ve heard they’ve been VERY busy! AP has been hopping on the weekends already, so just be prepared for that.

Other thoughts: I’m wondering if dinner on Sat or the jazz brunch on Sunday at R Bar is a better option if you’re set on coming to AP? Parking over that way might be a bit easier, but you’ll def have to check with them about wheelchair access. I haven’t been there yet, but musician friends have been playing there regularly and love it. MY issue is that menu isn’t my taste, but it might make your crew happy.

For something less ‘fancy,’ there’s also Sami’s Mediterranean… food is terrific, decor is nicer than you’ll find at KM, and Sami and his wife will be gracious hosts. Again, dropping your mom off should be easy and the AP muni lot is across the street.

HBD to your mom!!

You know I have them.

Absolutely!!! And that’s why I love you.

One thing to note about the R Bar is that it can get pretty loud in there when the music is playing. Otherwise, the food and drinks are on point.

@heidicooksandbakes I drove past KM just now… no steps that I can see, so getting your mom out of the car in the lot where you can’t park looks like the answer if you’re still going.