I thought we had discussed this new restaurant (it opened in Mid-may while I was still in Shanghai) in another thread but couldn’t find it.

From the pictures and menus on Yelp I guessed that Jiangnan Cuisine might be related to Taste of Jiangnan on Clement. My suspicions were confirmed when my wife and her daughter went there recently and checked it out.

Taste of Jiangnan on Clement was founded by two women, one from Beijing, the other from Wuxi. Apparently some differences arose between them and the one from Wuxi left to open Jiangnan Cuisine (3420 Balboa). Ju Ju didn’t ask if the Wuxiren chef from Taste of Jiangnan followed her, but said the food tasted the same (to her well-developed Wuxi palate).

With Shanghai House, Shanghai Dumpling King within two blocks of Jiangnan Cuisine and Village House (with its handmade noodles and dumplings) right on the corner, maybe it’s time for me to re-think neighborhoods to hang out in.

I had to google Wuxi cuisine. Everything I read mentioned it was very sweet and much sugar is used. Is this your experience?

It uses a lot of sugar, especially unrefined brown sugar, and is definitely sweeter than most other regional Chinese cuisines, including other components of Shanghainese cuisine. It’s not Panda Express sweet, though, and they eschew the use of corn starch in that part of China, so it’s not as cloying as you might imagine.

I enjoyed the meal at Jiangnan Cuisine this weekend.

First dish was a whole ‘red-braised/ hong shao’ bass. The sauce, with a little bit of rice wine, soy sauce, sugar, was slightly thickened, savory and pretty good. The bass and the thinly-sliced silken tofu duly soaked up all the sauce. The fish was said to be around 1.3 pounds, and was flaky and worked well with the prep. Perhaps the sauce was slightly on the salty side. 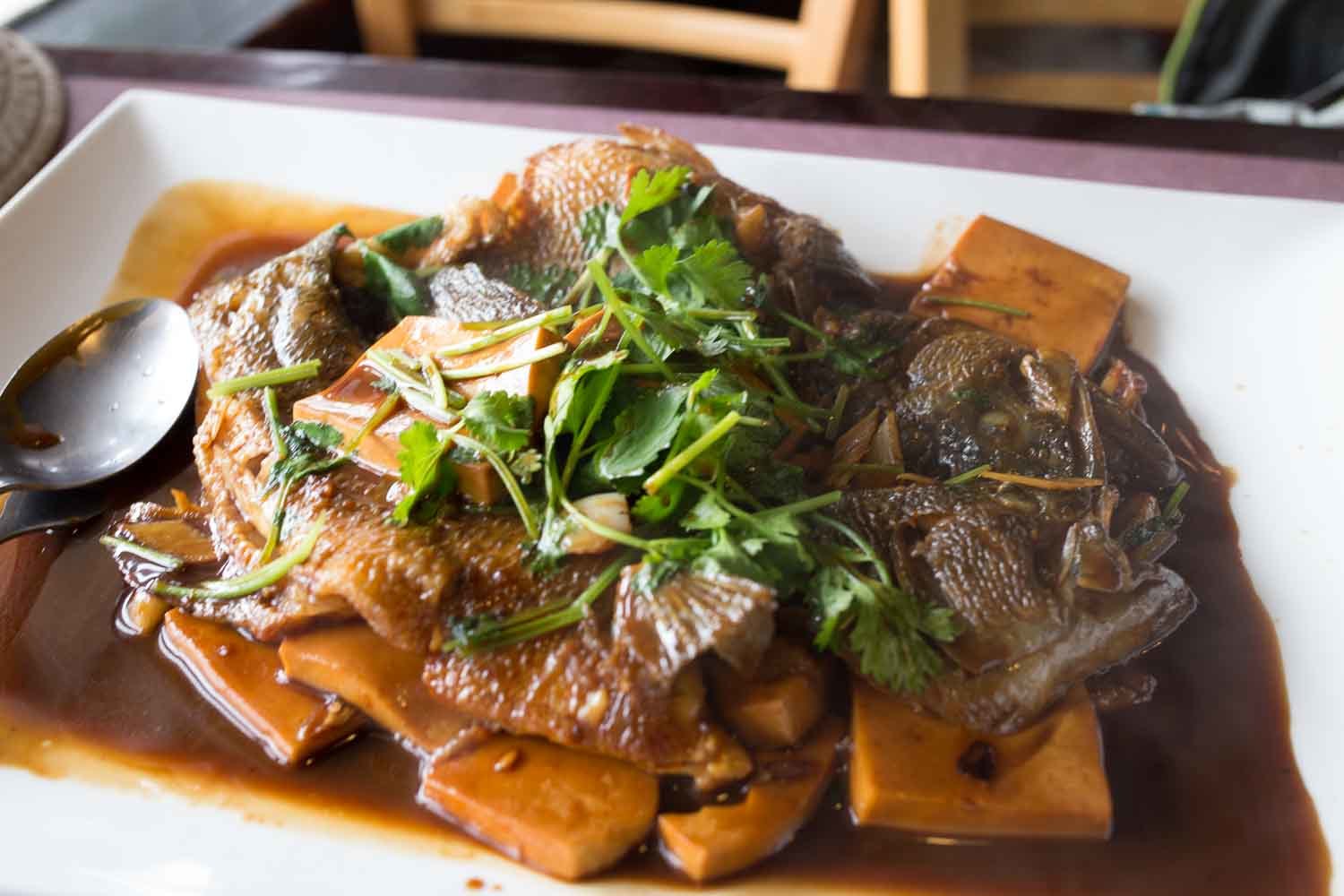 Red-braised pork dish employed a reduced soy sauce and sugar sauce that’s caramelized. The sweet sauce was infused into the jello-like fatty layers of the pork belly. The drawback of the dish was that the belly was of average quality- the lean meat was seemingly refrigerated too long and was dry. Stick with the fatty parts for the nice sauce. 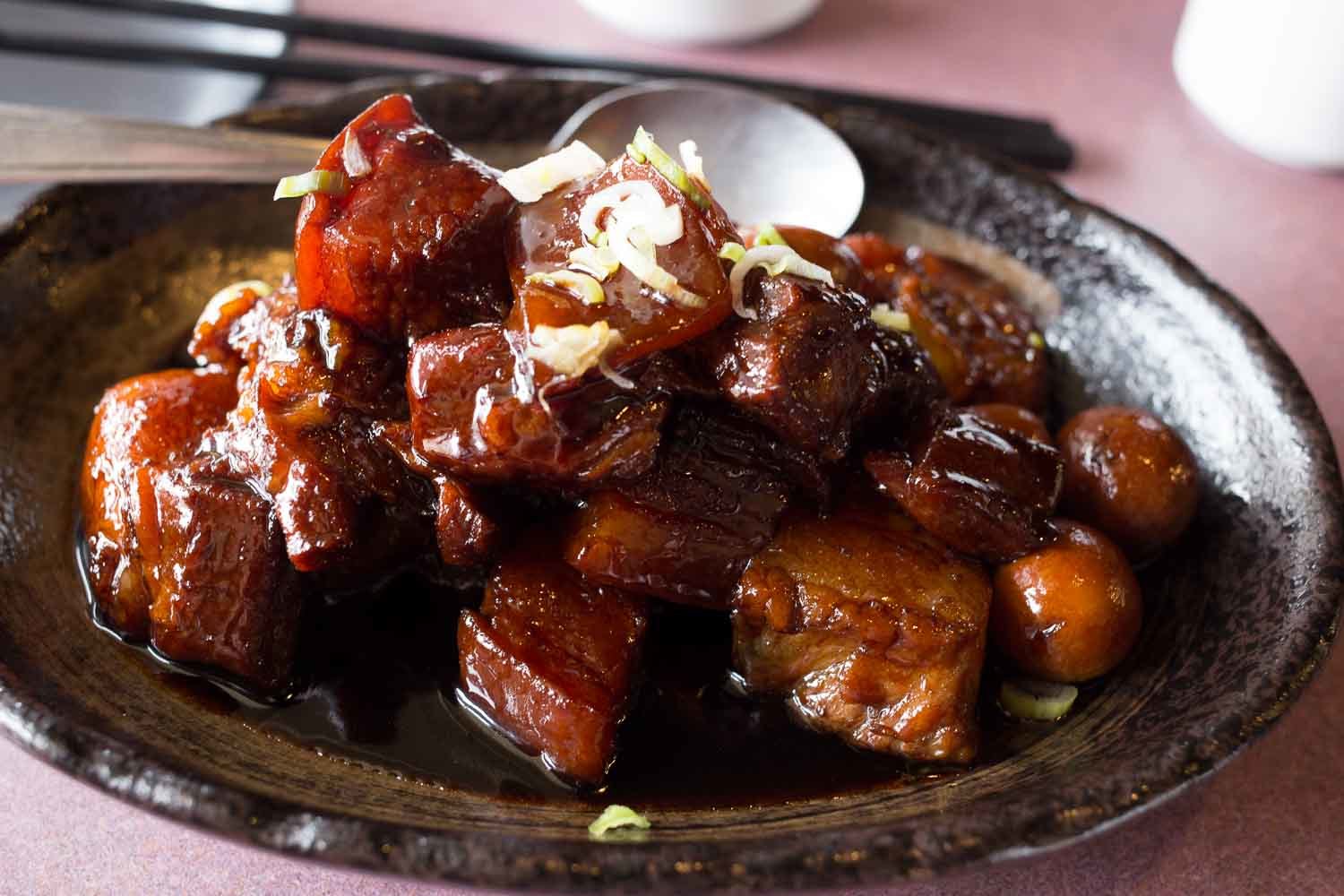 The (Shanghai) vegetable rice with salted meat came with chopped bok choy, salted pork. One may argue that its not as oily as it traditionally may be, but I welcomed the light touch. 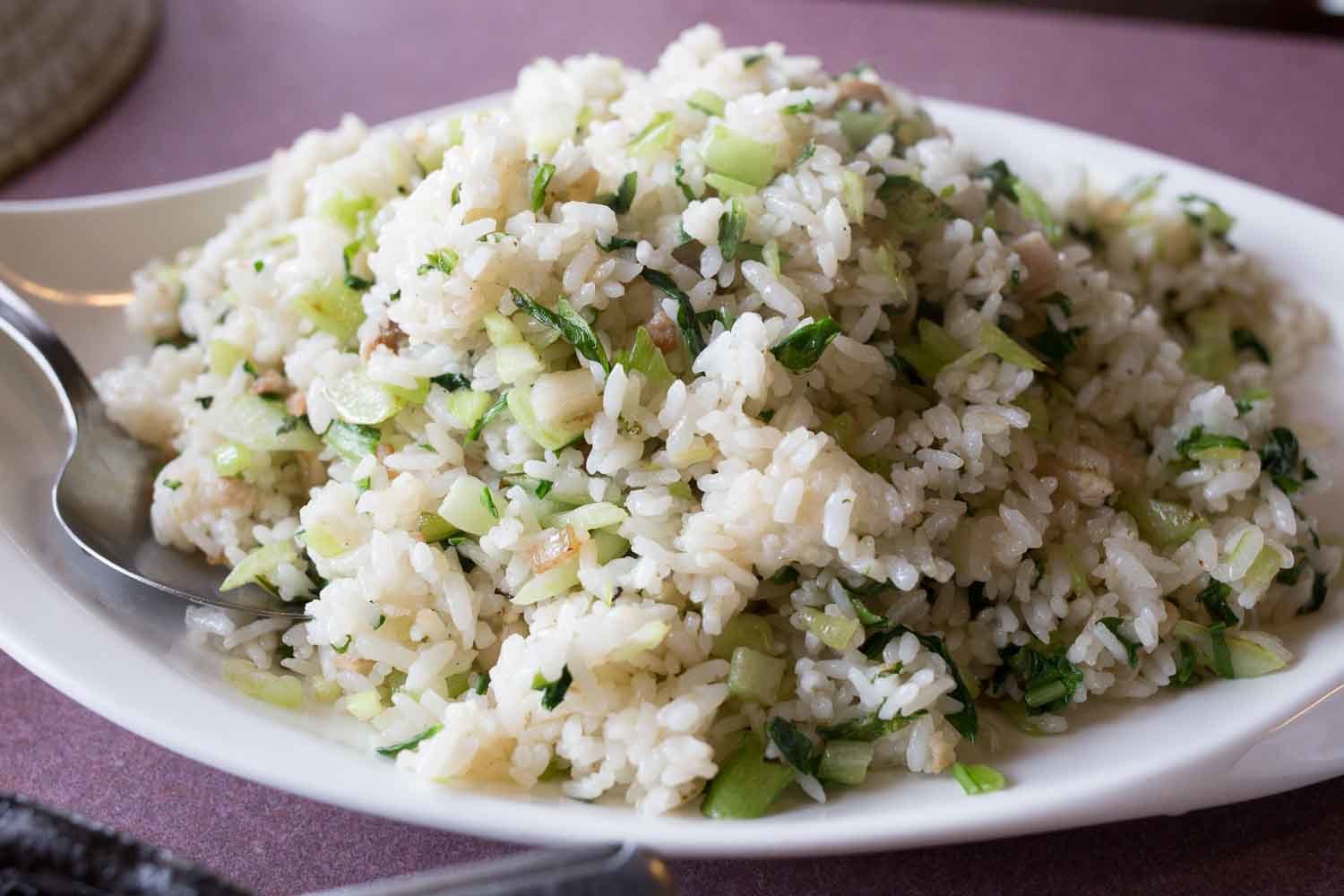 Overall, I quite enjoyed their skills in making the Wuxi style reduction sauces. Would love to hear feedback on other areas of the menu, especially the Wuxi/ Jiangnan/ Shanghai specialties

Dining room was 70% full when we got in at noon, and the restaurant was full with a couple of parties waiting outside when we finished. 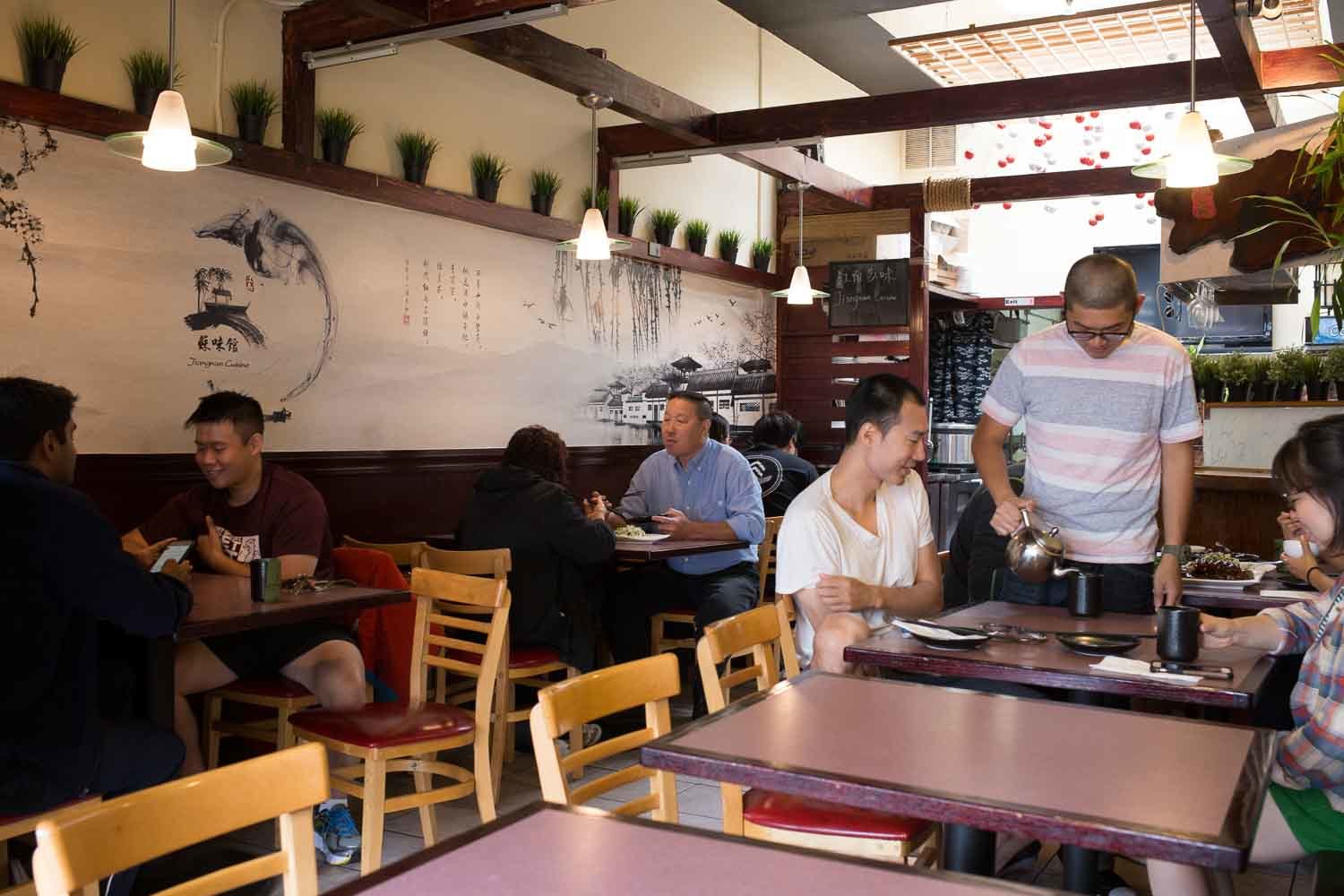 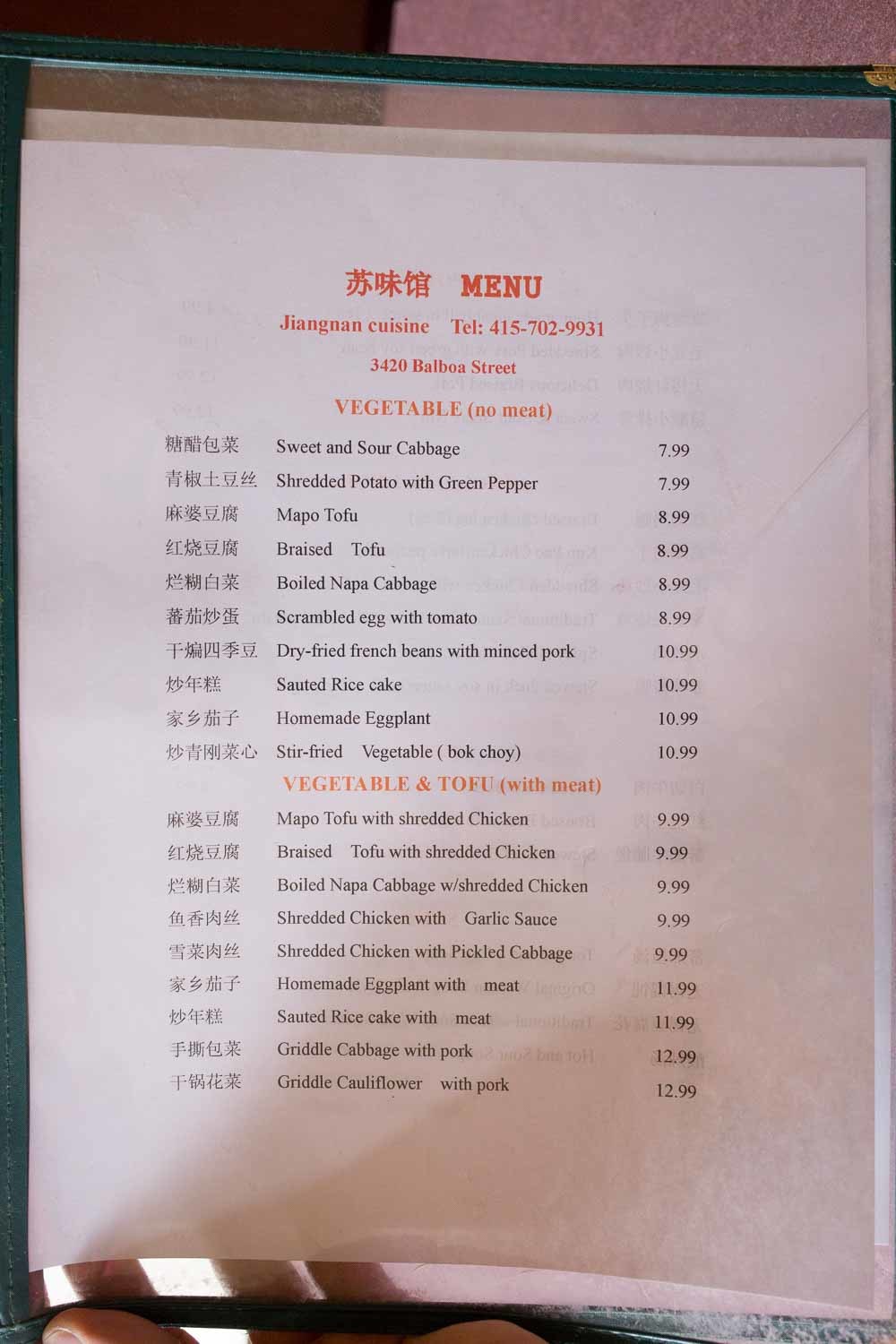 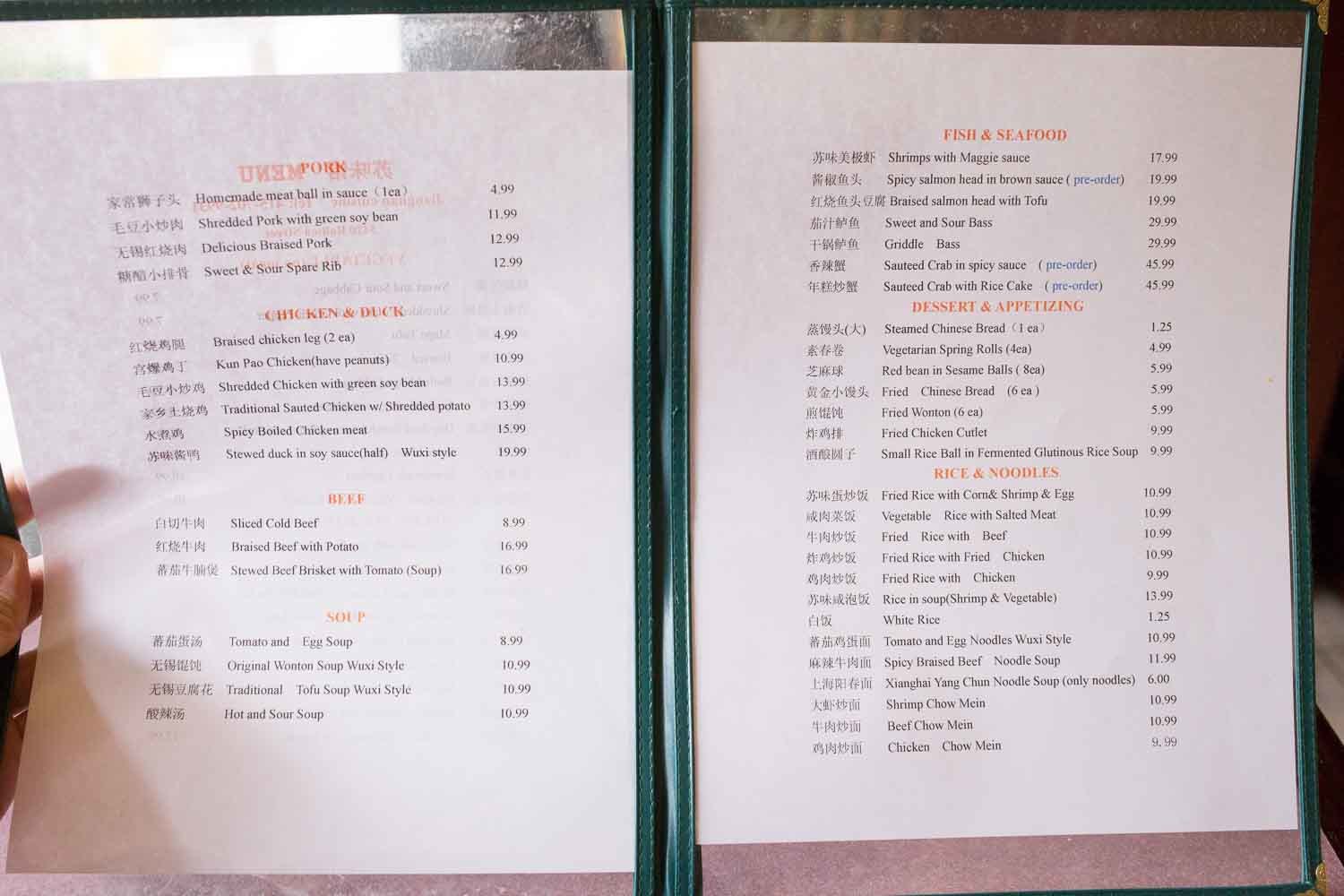 Worth noting that when I had a birthday meal at Taste of Jiangnan on Clement last year (same owner), we had a vegetarian in the group and they accommodated our request to make a vegetable rice (cai fan) without pork, which is how my wife sometimes makes it at home. They have the right touch with this dish; it should not be as oily as fried rice, IMHO.

I agree with you. The dish was traditionally part of a laborers’ meal, and before the economy took off in the last 25 years, there was a lack of money for ‘fancier’ ingredients. Oil was used liberally as a source of calorie.

Now people, especially in the Shanghai area, has more money for better nutrition, there isn’t a need to cook with a bunch of oil any more. But I think some people may be conditioned to think the vegetable salted pork rice, or perhaps the cuisine around that area, should be oily.

Tonight four of us came here for dinner, and i left quite happy. We split two lion’s head meatballs, and these were super tender and textured, with meat that seemed chopped rather than ground. Nice dark sauce not too sweet or rich or thick. Things ordered from the lighter end of the color spectrum were the griddled cauliflower, the vegetable rice with pork, the stir fried rice cakes with preserved vegetable and pork, and the original wonton soup Wuxi style. Back to the deep, dark side of things were the sweet and sour spare ribs, and the half duck stewed in soy sauce Wuxi style.

My favorite were the sweet and sour spare ribs. The broad appeal of sweet and sour all grown up in a sleek, confident sauce alert with black vinegar and soy. Some of the leaner parts of the pork were a little chewy, but the fattier bites were so tender. I was initially surprised i didn’t love the duck more, but even though it was much less oily than might be expected, it was still very rich, and the star anise might have been a bit too much, almost a little musty for me. It also arrived last, so might have been too full to give it my full attention. It was a fine dish, though.

The vegetable rice with pork was a nice surprise. Is this not technically a fried rice? It was light and delicate but tasty enough on its own that i could imagine eating a lot of it with just a small compliment of something else, be it a soup or a more assertively flavored dish. And although i was in a Korean restaurant on lunar new year, i abstained from eating the traditional rice cake soup because, well, it’s not my favorite, but i love those chewy little disks when they’re stir fried, so i ordered these with the preserved vegetables and pork, and figured between that and the wonton soup i almost had a late, deconstructed Chinese version of what I neglected to eat per my own ancestry. What was interesting about the rice cakes was that the vegetables seemed to have mostly dissolved into a starchy sauce coating the disks. It almost looked like someone had dressed it in creamed spinach. It was still good, but i prefer versions i’ve had where its more obviously a stir fry, and not almost a braise. I think the soup was sort of shrugged at by the rest of the table but tonight was cold, the restaurant was not heated, and the delicate broth with the bits of seaweed almost meltingly dispersed throughout was very comforting for me. The big wontons were generously stuffed with a tender pork filling, and the small slivers of shiitake mushroom were a nice touch.

Well i think that’s everything. Oh. The cauliflower was good, with some nice browning and bit of heat from dried chilies. I just don’t get very excited about cauliflower, but this was good. I was a little bit worried about repetition in the dark brown sauced dishes. What little i know about this region and its food suggest that at least the rest of China seems to have some disdain for what it sees as a monotony of sugar and soy. But what nation with multiple, proud, distinguished regional cuisines doesn’t share this competitive eyebrow raising and head shaking? For me, I thought they had distinct differences: the meatballs seemed to have prominent but not too strong ginger flavor, the ribs had a lovely balance of acid from the vinegar, and the duck had those warm spice notes from the anise or five spice.

I would love to go back to Jiangnan Cuisine, and soon.

The vegetable rice with pork was a nice surprise. Is this not technically a fried rice?

I don’t think the prep calls for high heat searing of the rice like a fried rice would. In fact, if I am to make it myself, I’d just cook the rice in the vegetable broth.

Thanks for the report. Sounds like a delicious meal.

What was interesting about the rice cakes was that the vegetables seemed to have mostly dissolved into a starchy sauce coating the disks. It almost looked like someone had dressed it in creamed spinach

I think it’s more common than not to use greens that are purchased pre-chopped for that dish. A brand of shepherds purse (ji cai) I recently got frozen at Marina Food seemed to have a finer chop than bags of salted mustard greens (xue cai, “snow vegetable”), which are more commonly available, so the dissolving makes sense.

Glad you liked the meal, and I hope Jiangnan Cuisine is thriving. I imagine the menu and the execution are more focused since they split off from the uneasy Jingpai/Haipai alliance on Clement St. The Wuxi chef was the star of that operation. (He is actually from Shitang Wan, a village west of Wuxi, which also happens to be my wife’s ancestral village.)

The vegetable rice and the braised nian gao (rice cakes) there are as my wife prepare them. Stir-fried nian gao is really a different dish, sliced thinner, ideally lightly browned at the edges with a little “wok hei” and with a pork complement.

The meal you had, with the exception of the duck and the cauliflower (which is verboten on my table) sounds like one my wife would come up with on a good day, In fact, the reason we don’t go there often is that old reluctance to go out and pay money for the same food you could cook at home.

Haven’t been yet, but remember reading a nice article featuring this spot from Chris Ying during his short stint at The Chronicle

The one on Clement appears to have closed some time ago.