I’m a longtime fan of JSBBQ and have been there almost weekly since moving down here…half price rib and half price wing nights?? YES!

I’ve been to Simply Southern once (bc JSBBQ was closed after a they were wiped out if meat over Labor Day!) and while I thoroughly enjoyed it, that’s not the type of cuisine I generally gravitate toward. If you like southern food, though, it’s a MUST try!

So, as we brace for more of our surrounding waterways to flow into our driveways and elbow little, old ladies away from the last remaining gallon of two percent, I figured I’d come back to the first mention of Redemption to note, as many of you may be aware, that ChefMd has left the restaurant. While I’m of the opinion that he may not be thrilled about the change, I am certain that I am not. Thus, I’ll indulge myself with a dabble into lamentation and food philosophy.

Over the years, I’ve gotten to know Mike and his preparations, at different establishments across the area. Frankly, he’s my favorite. I think there comes a point in food geekery where one begins to look at the ideas behind what’s offered on a plate, not just what each forkful offers on the palate. Though the latter is of paramount value, an ever-growing appreciation of the former permits a better understanding of one’s own tastes and beliefs.

My understanding, of both myself and my preferences, is that for all the seriousness I put into most things, I cling to a sense of humor - a dash of whimsy in a stockpot full of considered flavor. This informs my approach to my own cuisine, and the restaurants I tend to prefer patronizing. That was the brilliance on display years ago at Trinity - that was the promise that was just starting to unfold at Redemption. While we can see another example of this in a local chef like Drew Araneo at his Keyport Bistro, I always found the defined scope of what was being offered there too constrained - almost like a stand-up routine modified for a corporate audience.

The fact remains, however, that restaurants are first and foremost money-making endeavors for their financial interests. This means offering food that never strays too far from a lowest common denominator base. This means stepping back from offering premises that may challenge many - never being able to wink at the audience. It may also mean that for those of us who sincerely love the idea of seeing something we know looked upon in a different set of lights, we’re always going to be poking around for it, disenchanted by how surrounded we are by conforming mediocrity.*

Ah, fuck it all. Good luck, Chef, I’m certain there’s a kitchen waiting for you to steer (as well as thoroughly sanitize). Just keep your sense of humor and let us know when you get there? It’s just food after all.

*Although I’m not shy about mixing my metaphors, I decided against drawing comparisons to musicians. Nevertheless, if I simply mention The Radiators here, maybe someone will understand the direction of my dismissed thoughts.

I was wondering where all the good CH folks had gone.

(aka wgrobinson pretty much anywhere on the Internet)

Welcome to the new digs.

Plenty of design upgrades, and half-priced apps from Noon 'til Four.

Great post, @MZ …I’m with you about Chef MD, whose food and personality I was really enjoying. As I said on the other thread, I was really happy to find some creative, fun, more ‘upscale’ (in cooking) food in my new hometown, so I have multiple reasons to be sad about this. I was just talking to someone who grew up in AP, and when I said “I guess they need more 20-somethings watching football and drinking,” he said that was probably true (look at the Asbury Ale House–it’s now PACKED).

Still…what will it take to get AND KEEP more Chef MD types in this area? I can’t believe that NNJ or the Central NJ suburbs are their only options. Chef MD was the one chef’s name I knew down here before moving south, and before ever trying his food. As far as I’m concerned (after only a few meals there), it’s a loss for AP. I follow him on Twitter and hope he’ll post some news AND SOON.

And mix your metaphors all you want! Music and food go hand in hand, as far as I’m concerned, and my tastes tend to align there (see: Ben Folds, Steely Dan, and a whole host of others who may not be QUITE as cool as The Radiators)!

I knew you knuckleheads had gone somewhere, hopefully that post over there stays up to bring the rest of them.

Yeah, we’re here, and glad to see you guys.

Joliet Jake and I are puttin’ the band back together. Mission from God, and all that.

Hey!! Welcome tomt & WG good to see you both!

I gotta tell you, the band really sounds great again. Hat’s off to you, my brother.

Gracias! Glad to have you back in the fold, hope all is well.

(FYI emailed with Fourunder recently trying to get him to come over, he wanted me to let you know he still owes us dinner at Jimmy’s he insists he’s going to come through one of these days.) 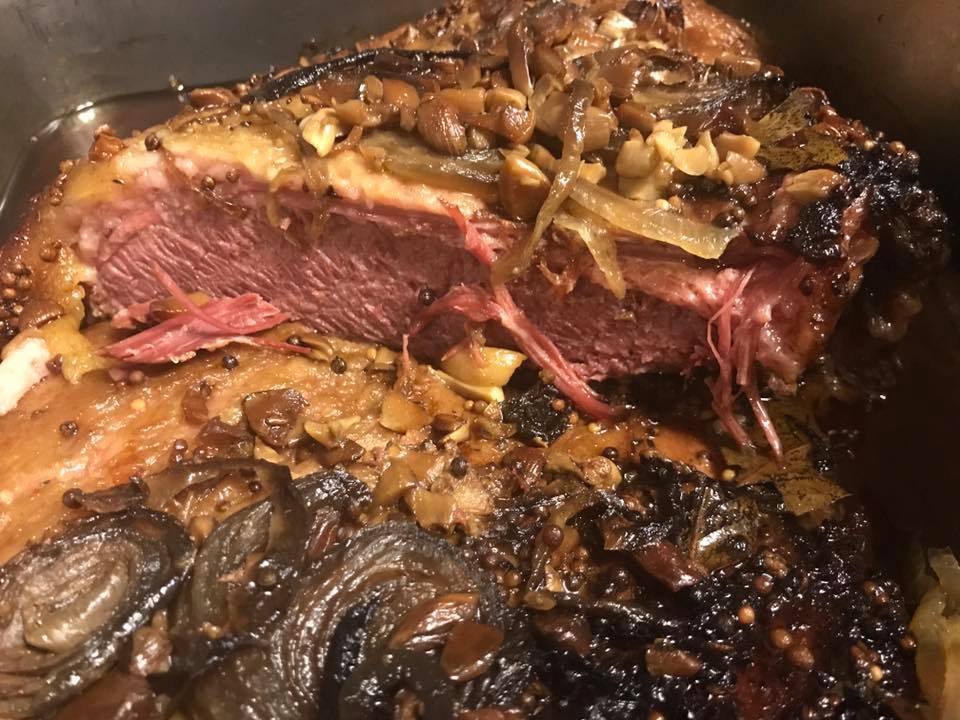 Happy Half way to St. Patrick's Day! We will be running our Smoked Corned Beef Texas style and NY styled Reuben's as well as Corned Beef Sandwich's, through September 24th. See you shortly!

Holy cow…I bet this is delicious. I’ll try to make it down.

I went last night with a friend. I’m disappointed in my meal. They gave us the homemade potato chips with onion dip. The onion dip was great. The chips that were crisp were delicious. However some of them weren’t crisp, kind of not done. Even though looking at the color they should have been crisp.

I ordered the ribs, along with the corn pudding and hand cut fries. The fries were seasoned nicely and hot, but just weren’t crispy.

The ribs were nicely done, but were lukewarm. The corn pudding was ok, but it would have been nice if it was hot.

It was a chilly night, and even with a vestibule everytime people came or left, a cold wind blew into the place. If the food was hot, I guess I’d be more forgiving about that point. Overall, I’m just disappointed.

I think JSBBQ (assuming Belmar from the description) has lost a step or two since opening their second location. They are currently in danger of falling off “the list” and out of the rotation.

Yes, it was the Belmar location.

I sadly have to concur. I have to believe the focus shifted to the new location, as the last few times I’ve gone, it’s just been ‘ok,’ and that was never the case.

The new location (only one I’ve been to) took over a Dickey’s BBQ. At the time, there was a newspaper story where they said they kept the Dickey’s smoker and it was a different type from the one they had in Belmar and affected how the meat turned out. Not necessarily better or worse, but different. Maybe they decided to swap it with the other location and that’s why Belmar isn’t what it used to be? Just pure speculation.

And is a smoker so expensive that you wouldn’t invest in having the same type at both your locations to ensure consistency? That was my thought at the time reading it.

I’m one of the few people on the planet that like soggy chips and fries. That is just me.

This is too funny. I pass by that spot that I thought was still Dickey’s every day. Had I known it was now a JSBBQ joint Ida stopped for take out.

So, is this location good? Has anyone been?