Is veganism the new terrorism?

It has become a cult. Shows the depth of hate for non-vegans. Is this the mentality of a large majority of vegans?

French butchers have written to the government asking for protection against militant vegans, accusing them of trying to shut down the country’s traditional meat-eating culture.

Shops have been stoned or defaced with anti-meat graffiti and stickers, the French Federation of Butchers says.

Over the last few months, 15 shops were splashed with fake blood.

Federation chief Jean-François Guihard said in the letter that such attacks were a form of terrorism.

“It’s terror that these people are seeking to sow, in their aim of making a whole section of French culture disappear,” he wrote.

Vegans wanted to “impose on the immense majority of people their lifestyle, or even their ideology”.

_ Is social media behind the rise of veganism?_
_ How a YouTube beef shook the vegan world_

Vegetarians and vegans make up just a few percent of the French population. A 2016 survey estimated that 3% of French people were vegetarians.

“The vegan way of life has been over-hyped in the media,” Mr Guihard said, contributing to intolerance.

French butchers have an exalted place in traditional French life but incidents like these are not entirely new, BBC Paris correspondent Lucy Williamson reports.

One shopkeeper described his locks being glued shut 20 years ago.

As a result of a reduction in meat sales, farmers’ groups have appealed to President Emmanuel Macron’s government in recent weeks to prevent measures that they perceive as anti-meat.

Food makers want to stop the use of the terms “steak”, “fillet”, “bacon” and “sausage” for non-meat products.

A proposal to require schools to introduce a weekly vegetarian meal was rejected in parliament.

A vegan activist in France received a suspended prison sentence in March for posting a Facebook message saying the killing of a butcher by an Islamist militant was “justice”. 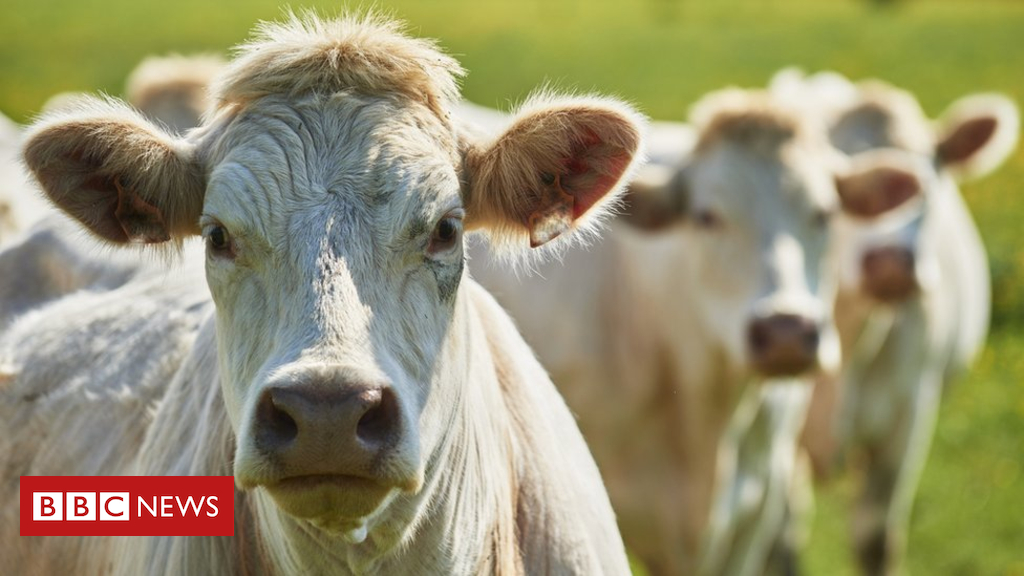 Terrorism is terrorism, whatever ideology is behind it.

None of the vegans I know are this militant about it, but I can’t say this article surprises me. Disgusting behavior from people who falsely believe they occupy some sort of moral high ground.

Presunto offers a number of social comments to discuss.

Veganism appears to be moving towards mainstream acceptance in the UK. There have been recent trade reports that sales of vegan products have increased considerably and food magazines appear to be including mopre vegan recipes. As such, it is difficult to immediately describe it a a cult, in the usual sense that I understand the word, as it is often applied to religious groups. But, for certain, there are individuals (and possibly more organised groups) out there who take a more extreme view. And I think evidence from the activities of militant groups in other areas suggest that, once soemthing starts to become acceptable, then the militants feel they can go a bit further to the extreme

I do not know any vegans personally. I do know vegetarians and others who choose to restrict their diets in other ways. I don’t find them as militants or hating omnivores so my guess is that most vegans are similarly non-militant - but , of course, I have no way of knowing. The only vegan I come across regularly is online as a contributor to forum run by the borough councillors for my ward. She takes any opportunity to link a thread to veganism, is always very, erm, strident in expressing her views and, often, in a way that directs offence towards omnivore contributors. So, if I was to base my view on my only contact with a vegan and stereotype all, then I’d conclude that yes, they hate non-vegans.

We could spend hours discussing a definition of terrorism (the old argument that one person’s terrorist is another’s freedom fighter). But let’s run with a basic idea that it’s violent, criminal acts in support of politcial or social change. As such, terrorism relating to animal products is not new. The Animal Liberation Front, formed in the UK in the 1970s, was active for around 20 years and had a contempt for human life when it came to “saving” animals.

Those “vegans” who are violent are anti-speciesist.

I have questions for those AS people, what make them have the right to kill and eat plants, if they are into their ideology?

How about the welfare of omnivore human? Aren’t human a type of animal too?

Several European countries (France, Belgium, Germany and Italy) jail the parents for introducing vegan diet for their children leading to death. Malnourished children were being removed from the care of their parents.

As long as vegans respect and don’t impose their point of view on others (yes, even their children and their carnivore pets), I have no problem with them. It is a personal choice, and they should live the consequences.

I’ve just been reading an article in a food magazine about “things to eat in London right now”. In a side box on the page there’s “other things you’ll see on menus in 2018”. One of which is vegan junk food.

We know a couple who converted to veganism. At first even their cats and dogs had to be vegans. But then they saw the light. Now the cats get meat every day, and the dogs twice a week. The dogs may need a little more light.

The dogs may need a little more light.

Dogs will go to steal the food of the cats or they will befriend some butchers.

Ohforchrisstsakes. What dimwits.
I think that similar to religion there are extremists who potentially bring a poor reflection on an entire belief system. Obviously there are more constructive law abiding ways to express their passion.
I’m vegetarian (and lactose intolerant and i kinda hate eggs, so yeah most of what i eat is vegan) and i know a good number of kind openhearted generous people who happen to be vegan and are not bizarre and militant extremists. They just choose to avoid animal products.

Just the way it’s possible to be catholic and only go to church on major holidays or be catholic and go to church twice a week there’s also a spectrum of veganism from a quiet gentle avoidance to a more outspoken preaching vegan.
I’m optimistic that plant based meals with vegan options will continue to become more commonplace so that ultimately the customer can choose.

The NY Times ran a similar article but answered the OP’s question by stating that every vegan group condemned the violence.
Living in Chiang Mai, the vegan capital of the world, I have many friends and acquaintances that are vegan. Most are very nice people. But this does remind me of the old joke, “How can you tell if someone is vegan?” … “They’ll tell you.” 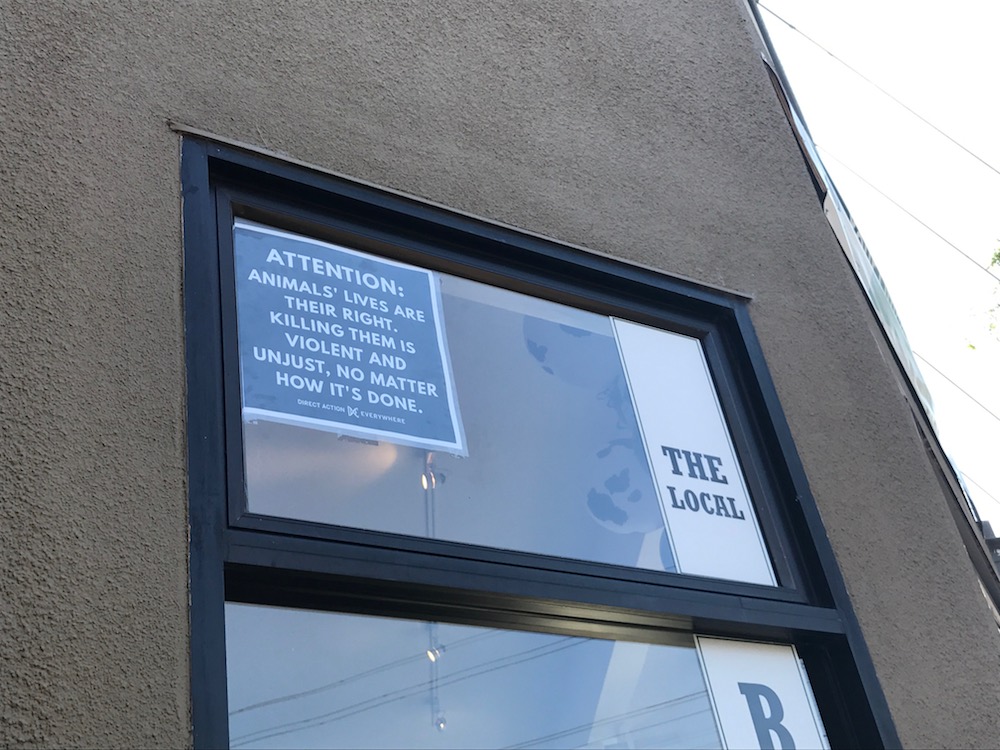 The sign, created by Berkeley-based Direct Action Everywhere, denounces the killing of animals.

This is a craft butcher shop across the street from Chez Panisse in Berkeley, btw. The protestors are a group based also in Berkeley. Even in the most liberal town in the U.S., this is extreme in my opinion.

Oy. That group manages to transform “liberal” credentials into meaning small/closed-minded. There once was a time when being liberally minded meant being willing to listen and give thought to ideas and views other than your own.

So I’ve been doing some reading and learning a few things. Wow, seems there are almost no moderate vegans*. The more I read the more I realise veganism is not simply a diet choice, more like a political movement. I know a handful of vegetarians who are “normal” and agreeable people and I thought vegans would probably be similar. From what I’ve read vegetarians are also hated by vegans because they “don’t go all the way”.

Some comments by the militants are utterly repugnant. My theory is also that veganism is more excepted now and there’s more awareness militancy is used to further their agenda, hence the rise in militant tactics. You will quickly notice a pattern: childish name calling, guilt-tripping, impossible to reason with, anger issue/open hostility. This militant approach is hurting the real vegan movement.

The absolute arrogance is saying veganism is the way and if you are not vegan then you are a monster. I’m all for free lifestyle choices but their sanctimonious proselytising actually pushes me/people away!

*Yes, some moderate, reasonable vegans do exist but they tend to keep a low profile for they are also attacked for not being “militant”. And of course there are also carnivorous bastards.

Militant anything is no good. At the end of the day one knows what’s best for them and it’s none of anybody’s goddamn business.

To clarify, I am not saying vegans are terrorists, and I agree with @Ttrockwood that just like religions, there are extremists that gives the whole movement a bad name. I don’t even have any issue with people eating vegan or the idea of eating vegan.

Also to clarify, I have no issue with anyone who chooses to eat only this or that for any reason. But I’m against militancy.

The vegan couple I mentioned above, who to my mind were mistreating their animals, are by no means militant. They in no way criticize others’ eating preferences.

I ate vegan for many years, and no onions or garlic. I never asked for vegan food, because everyone is so disparaging and dismissive. It was a personal choice. I simply ordered vegetarian food, and asked that the cheese be left off. I never requested anything that could be considered an imposition.

People such as PETA and vegans throwing fake blood and making demands allows people to judge vegans for their madness, rather than encouraging a thoughtful conversation about why people choose to not eat meat.

I don’t consider it terrorism unless people are being murdered in the name of ideology, but I do consider ithis a counter-productive strategy.

Yes, I have seen that. My reply is more about the militant aspect.

It’s intentional abuse. Good that the cat gets to eat meat again. They are not evolved to live on a vegan diet. For their owners it’s OK.

My point is that they are not militant. I do not believe that most vegans are militant. There are, however, militants who are vegans.