Is this a steal, a good buy or bad decision?

ccj, your link doesn’t work nor the image. Can you check again or upload the pict? Thx

thanks
I hope the 2 cm will work fine as vintage 3 cm are rare, the new one fro Brooklyn over my budget. I also od not think I can handle it fully loaded.
I was searching for an answer , it seems you had a discussion that soup pot is not as critical.
If I did not win this one, planning to bid on the one from Lamalle NY, It is hammered, 10 Q , 11 pounds , also 2 mm. Starting bid is $249.
I feel better now.Ginger thinks she would not buy it as the lid is for a sauce pan; I think she thought from the picture the handle is on the side. The handle is from the top.

I do not know how to send picture otherwise.
Pls go to eBay, it may still be there
Kaleo thinks it is a good buy
If you go to Brooklyn Copper, the new one cost $1050 except it is 3 mm
This has a dime size dent close to the top ridge, tin is intact, not too oxidized, but exterior has that old glow of copper , I think much better than new copper . It has the mark on the initials on the lid, PB and next to the handle, 26 mark and Initial I. (?) 1. Not too sure.
I bought a 1940 Rondeau, a month ago, Hammered Copper, new tin, which is absolutely beautiful. It is 3 mm but the bottom is 4-5 mm , very heavy. I have only used it once, am still on the learning curve. Afraid to mess up. Also bought per Kaleo’s advise from Bottega, Del Rame , a 3 mm frying pan. very heavy, with lid. hand hammered and planished on bottom also. Purchased 8 pieces so far in the past 3 months, slowly collecting.

2 posts were split to a new topic: Upload images

Hi ccj, your purchase sounds like a good deal, as does your rondeau. If you ever figure out how to post pictures we would love to see them. 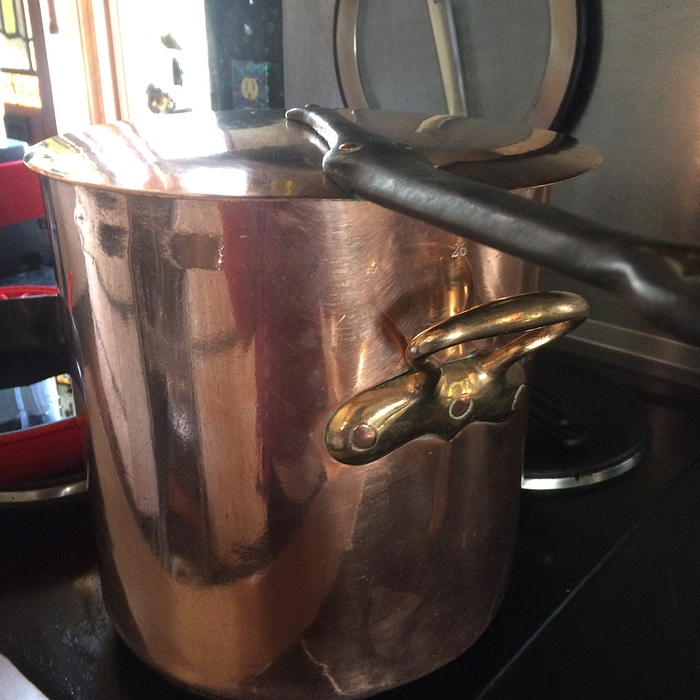 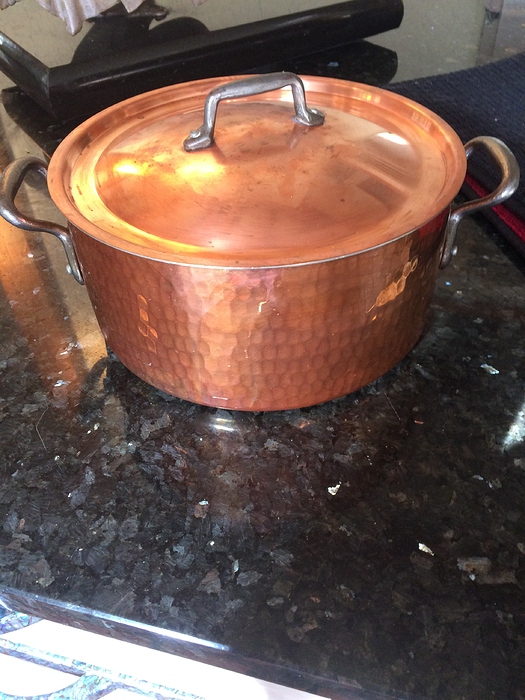 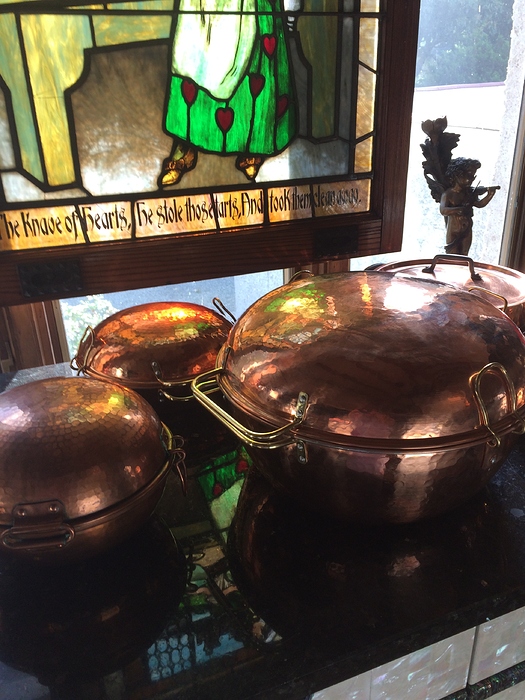 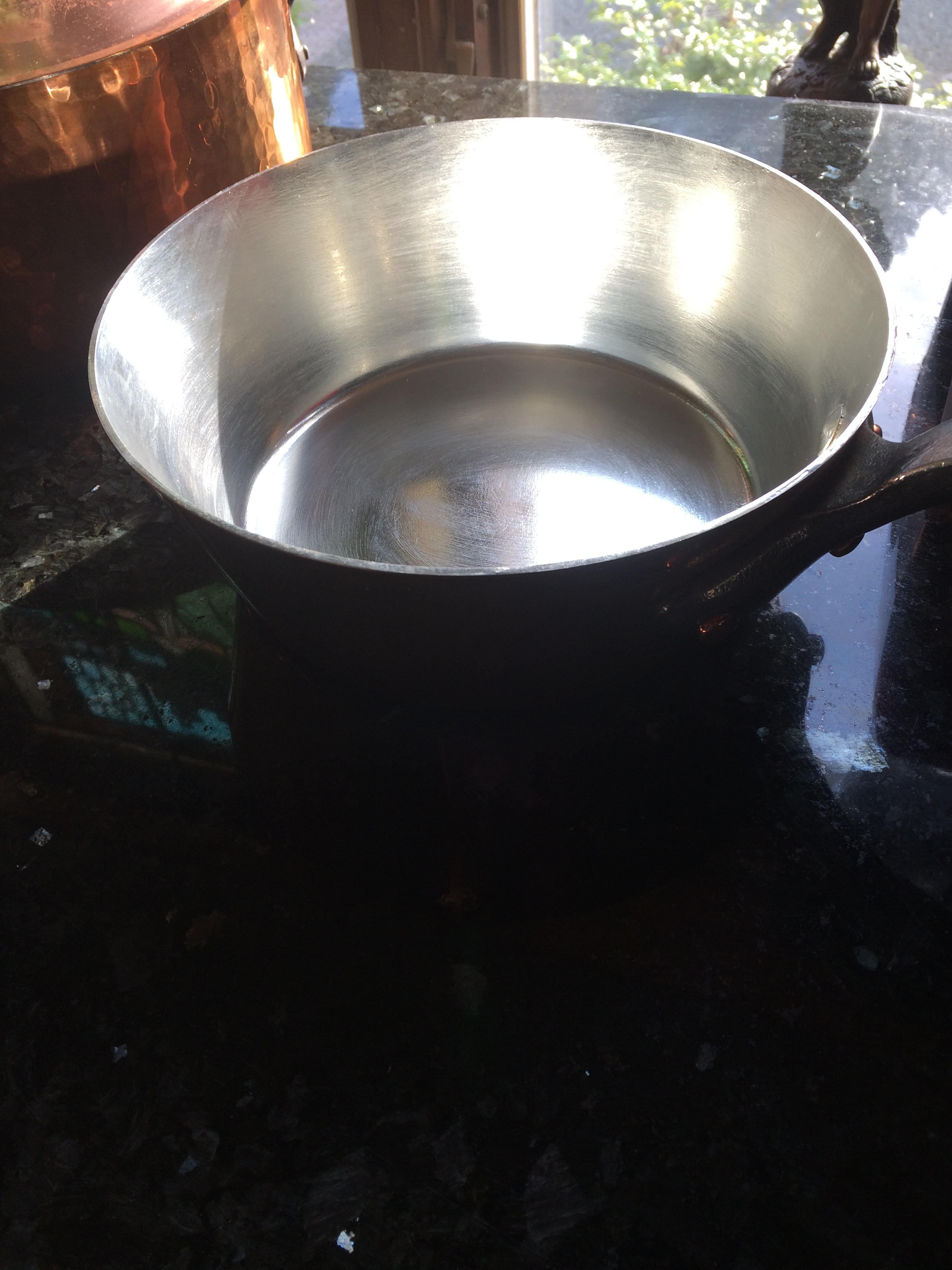 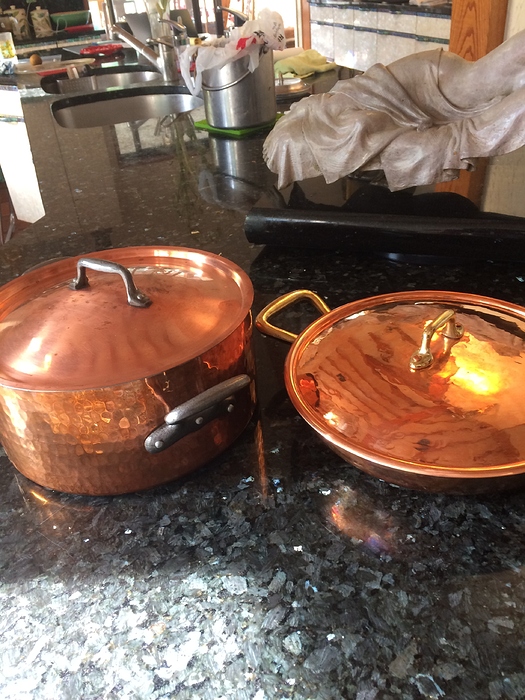 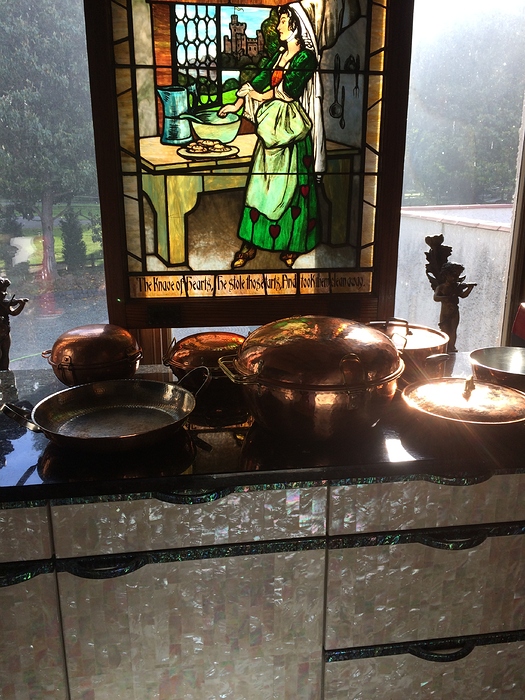 not a good photographer but those are some of the pan since I had COPPER FEVER early this y ear
bought 2 cataplanas, one from eBay, vintage, one from Portugal, disappointed, so ordered hand made from Portugal. now have 4
rondeau- havard 1940- 2.5 mm on top ( she say8 s 4-5 mm on bottom)
10.25 fry pan with lid and double loop h handles from Mazetti Bottega de Rame
a vintage windsor 8.75 newly tinned by Jim at ECT. It is 5 poundsJim says it is a very good buy
a 14 liter 2 mm daubierre stew pot from UL 5.4 kg ( too heavy )
a new sertodo alicante paella pan
pictures downloaded separately
what do u think?

I wanted to add that the 26 cm stock pot was such a deal, basically $75. plus the shipping - the lid alone is worth more than that. ! And yeah, whoever Ginger is, she’s right, it’s not the ‘right’ lid, it’s more of a lid for a sauté . Also, I consider it a stockpot. Not a daubierre stew pot. But who cares, it’s great.

And I love the Havard piece, although I would not consider it a rondeau, which to me is shallower, I would call it a stew pot, or maybe a casserole. Was it expensive? Havard was famous for making bells. It’s a beauty.

Finally, what do you think of your paella pan versus the double handled fry pan?

She called it a rondeau. It was expensive
I paid $500 plus S/H from France ( $67) but it came express and that is the only way she wanted to ship it. If you look at the color and the hammering it is much prettier compared to the new ones

As for the stew pot, I only used it once, a lot of chicken thighs and legs ( w/o skin), country style pork, and a bag of pork with bones from the Asian store, cooked Filipino style ( Adobo) with lots of garlic, caramelized onion, peppercorn, cider vinegar and pepper. However, I did not add enough vinegar to my taste. It was so heavy I could not lift it. I had to move them into different pots, add more vinegar to my taste, afraid that the cider vinegar would mess the tin up. My son returned home the next day from Amsterdam, and for the first time, he did not complain that there was not enough grace. I usually use my Le Creuset French oven for that.

I like the double handle one from Mazetti ( recommended by Kaleo). That is the one that had the stain from balsamic vinegar which came off with 7 ams baking soda per 100 ml water. I used it 3 times already, cooking leek in it and I use it to make potato au gratin.

The paella pan, I only used once. Thought I will use it again before my son left ( he was home for 2 weeks, back in Amsterdam) but he thought it would be easier to use the ingredients in the small cataplana. I bought it so that I can make paella for just 2.

Anyway, I bought these copper pots hoping that he would take a course in cooking and not depend on me. He has no interest so far. I had to give away a whole set of pots and pans ( brand new purchased for our condo in Amsterdam but our range there was induction) bec of these copper pots.

Was looking into buying the set of 3 gaillard 3 mm hammered pan from France. It was $329 plus S/H. Wanted to have them shipped to Amsterdam instead but it got sold. Anyway, my son is paleo. I will only buy if there is another set like that for my collection. I have not use the newly purchase windsor which was purchased by the seller from an antique store, sent to Jim at ECT. I sent him an email re the pot. He says it is a very good pot, 5 pounds, 8.75 inch. So, I purchased it. Am looking for a whisk but wander if I should just buy a silicone whisk instead of the this? I wander how sturdy it is , will I get burnt bec it seems too short for 39.93? Chasen ‘Ooaraho’ (Black Bamboo) – Sabun Kubo at ETSY?

I have a whole set of AllClad and extra which I like as fellas Le Creuset. I think my buying days are over. My best piece from All Clad is the French Wok with the domes top. I leave it on top of my stove.

Tried to sell the cataplana ( use it only once) purchased from Portugal which I did not like. Offer was so low that I have decided to give it to my son to use on weekends on the boat as he sleeps in it and cooks on the beach! At Amazon, the one that is 3 mm bigger is $329. I offered it for $135 but no taker except best offer which is way too low.

just got a reply re the black bamboo to use as a whisk. Seller does not recommend it for use as such
The next thing I would cook in that big pot would be spaghetti sauce and chill. However, the need lots of tomatoes esp spaghetti sauce. Would it harm the pot or just discolor it?
thanks

Hi ccj, I bought some sauce pans a few years ago from that seller. I just happened to notice that he had several sets of sauce pans of good quality for sale. Several of those sets were 3 mm thick. But I don’t mind thinner copper for smaller sauce pans. I have some sympathy for your large stockpot that weighs so much and is also so tall. How tall is your rondeau? Is it over 10 cm? (4 inches).

I use a silicone coated whisk. But I also have a lot of newer stainless lined copper that I use everyday.

There are other bamboo whisks that are stronger and longer, often used to clean woks out with. https://www.amazon.com/s/ref=nb_sb_noss?url=search-alias%3Daps&field-keywords=bamboo+cleaning+whisk,

Of course you can cook tomatoes in tin, remember in the early days of canned food, the cans were lined with tin. Some vegetables that contain more sulfur is what darkens the color of tin a bit faster, but it’s a natural process over time.

who is the seller? There were many pots when I clicked on EBAY earlier.
I think I overpaid for my Rondeau.It was my first piece. I t is 9.8 inches w, 4.7 inch high 7.2 pounds and 25 mm thick on top, 4-5 mm on the bottom.
I like to cook D’Artagnan’s duck breast using my Le Creuset Fry Pan but it splashes all over, even with the lid that came with it, so I thought I would use the Rondeau. Only used it once. I had the temp too low , my son was waiting so I ranked up the temp and almost burned it. I have a Vulcan 62 inch electric range, purchased '79 but had the french cast-iron cook top changed 2015 , bec one of the cooktop had a small alligator $8.00 piece broken, no replacement and since Vulcan refused to service homeowner( they sold it to me in 1979 , citing ins problem, , I had to pay their ex service manager to travel 90 min one way to service it, so I had them replace the 4 french cast-iron cooktop to the faster more efficient restaurant . Wander what will happen when it breaks down as it is huge
I also had a one piece cast iron top made for poaching fish and a 24 inch plank

Those whisk are cheap but I think I will buy a silicone one as my Al Clad wok is very easy to clean
After cooking, I just add some water, soap and by the time dinner is finished, I can just scrub it off.

Not cooking now days but think I will make a frittata .

No, I’m not a chef, I just bought some copper pans 10 years ago, and liked how they cooked. About 3 years ago, I just started buying more because I admired them. I have more than I can use now.

it seems u and Kaleo know a lot about copper cook pot
I see a lot of michael Lejune ‘s Asnieres’ pots/
how do u rate him?
Unless I see a 3 mm hammered one, even a smaller one, I m thru buying.
I am so sorry I missed Barttof’s 3 hammered sauce pan for $320
I sent him an email, asking if all are 3 mm, he responded the day before my son left, I sent him another email asking cost for shipping to the Netherlands, then sent my son the link but it was sold by then.
He seems to have some very nice pots.ebay

Yes Kaleo has made it his quest to really delve into and understand his cookware, particularly the old copper pots and pans. I admire his passion for it, and his defense of the older thick French pans.

I probably have a greater variety of the more modern stainless lined. As for the Michele Lejeune, it seems to be very similar to most of the good copper I’ve seen. The story I’ve read is that there was a Victor Lejeune who tinned pots in Normandy and around 1930 opened a retail shop to sell copper in Paris. The pan’s had the street’s name included- " F Lejeune 76 Rue Vaneau’’. Sometime later they may have moved to the Paris suburbs of Asniéres.

I try to look at the weight, even more than the claimed thickness. And a few grams difference could just be in the tin. Some will have a different hammered finish and some will be tinned smoother than others. Good photos, and weights and measures and you can decide.