Is it safe to cut winter squash with a mini hacksaw?

Sunshine842, no reason for embarrassment. I was actually very desperate; I had stopped eating squash because of the hassle and winters were becoming very boring. Also, I had introduced my aunt to squash (it’s not a popular Pakistani ingredient) by gifting her a blue hubbard from the farmers market, and it was love at first bite. So much so, my aunt was cutting herself every other time she prepared squash, but still couldn’t help herself. I had to think of something. I had used a regular hacksaw before in a quest to prevent crumbs from flying everywhere when slicing crusty bread, and that worked, except it did impart an off taste. I thought maybe it was a reaction between the metal and the sourdough starter or something. Now I know it was because of the oil. Since the squash gets cooked, the oil taste isn’t as perceptible as with bread. The standard hacksaw blades were giving me too much flex on squash, but the mini hacksaw blades worked well. Might just be the way I’m using it.

Thank you so much for teaching me about the blade types. I have used both regular (carbon steel) and bi-metal blades. The bi-metal was used with an electric saw that was too powerful, so I’m not using that anymore. Only the bi-metal blades have paint, right? How can I remove the paint? Will alcohol do it? Acetone? Something else?

My blades are similar to these and made in England (in case that matters): http://www.homedepot.com/p/HDX-6-in-Mini-and-Close-Quarters-Hacksaw-Replacement-Blades-TUO0001J/204284864

Yes, the teeth do get clogged, but I just wipe as I go. With older, drier squash, there’s less wiping. However, dried out squashes “crack” easily, while fresher squashes have more flex.

Why is this an issue? Say I’m just slicing a squash in half to roast it. My mini hacksaw looks exactly like this: http://www.acehardware.com/product/index.jsp?productId=21575746

After I’ve sliced through 3 inches, the top of the hacksaw will start hitting the squash, so I have to sort of pull the two halves slightly apart to fit it through. Drier squashes often crack when I do this. My solution is something like this:
http://www.acehardware.com/product/index.jsp?productId=1289467

However, that one’s hard for me to hold so I only use it when halving. I think this following model might fit a longer blade than what it’s rated for and I hope to try it out soon:
http://www.homedepot.com/p/Milwaukee-10-in-Compact-Hacksaw-48-22-0012/202523986

I searched around for a while just now and couldn’t figure out what material that jabsaw blade is made from.

It’s possible to cut it with a cleaver and without a rolling pin or meat hammer. Once the blade is in, it’s pretty much stuck, so I lift the cleaver/squash a few inches from the countertop, and bang it down again, against the cutting board. Each bang gets me two inches or so through the squash. Repeat 3-4 times until the squash splits in half. This doesn’t work for peeling squash, which I think was part of the OP’s goal.

Sunshine, that’s a tremendous answer to the OP. There should be a way to make it the first thing people see after reading the question.

I’m not truly embarrassed – it’s more a “duh, I should have thought of that!”

as to the material of the blade, it makes not a whit of difference – squash isn’t hard enough to challenge even the cheapest, flimsiest blade. Some manufacturers paint ALL their blades - typically carbon are black or blue, red are high-speed steel, and white are bimetal, but that’s not a hard or fast rule. Really cheap carbon blades are simply blued via a (highly toxic)chemical bath. You’ll want to wipe them down with acetone or mineral spirits, though, to remove the paint and oils – then wash them well with food-safe soap and water to remove the residues from the solvents before oiling with a food-safe oil.

As above, it matters not a whit, but the jabsaw blade is just high-speed steel --but it’s actually quite a good choice for a hard item like a squash because of the shape of the teeth.

Sawzalls are made for demolishing things – keep them out of your kitchen. The simple fact that you need two hands to operate it ought to tell you it has no place in the kitchen.

For crusty bread, buy a serrated bread knife – again, it comes down to the shape of the teeth and what they’re designed to do.

All of this is about using a tool that is well-suited to the job, whether you’re on a jobsite or in the kitchen, and a hacksaw is a crap tool for cutting bread from a technical AND practical standpoint.

Has anyone who has trouble cutting squash tried an electric carving knife?

How about using a “hunting saw” like the Gerber Myth? It’s designed for dressing large game in the field, so I would think it must be okay for food. Costs about $20. 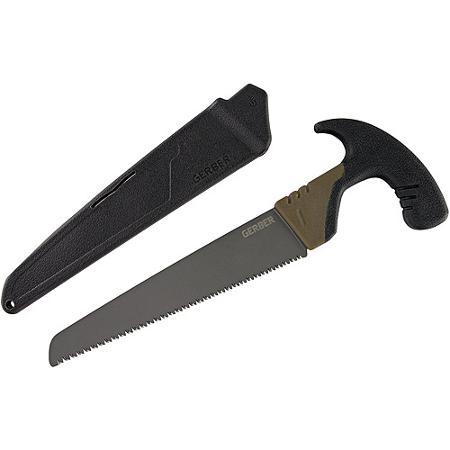 Sunshine842, do you know if the high-speed steel jabsaw blade should also be wiped with acetone?

Yes, they all should be carefully cleaned for food use, because they are all treated with oils that do not belong on your food.

Don’t get me wrong…you wouldnt die if you licked it right out of the package, but why ingest things that aren’t intended to be ingested?

The hunting saw would work, but is overkill on the level of using a sledgehammer to swat flies. Damned effective but the expense and potential for collateral damage is far more than the task is worth.

At my house, it’s the large knife and a wooden meat mallet.

Seriously, a cleaver or heavy chef knife cudgeled into the squash is easy. 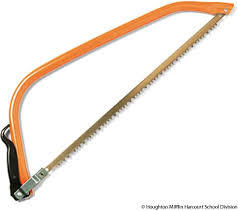 Seriously, a cleaver or heavy chef knife cudgeled into the squash is easy.

For me, I can’t peel an uncooked squash that way.

Oh, I thought the task at hand was splitting it.

Peeling with a saw? Pshaw!

There are two basic ways: Classic & Easy. For Classic, you cut 1/4 inch off each end, and then do the best you can to keep all your (and your two helpers’) fingers, using a very sharp knife or Chinese cleaver. There are probably martial artists in Thailand who can do it this way safely, but I cannot.

Easy goes like this: Scalp off the ends just like with Classic (Your squash will think it gets to hear you curse and see your blood). When it’s expecting more of the knife, surprise it with-- a fork. Prick it all over, then throw the haughty thing in the microwave. Feel free to cackle evilly as it cooks on High for about 3 minutes. Let it cool a bit, and then peel it with that Safety Razor of cutlery, the lowly vegetable peeler.

If you have strong hands, there is a third alternative. Swiss Star makes a wickedly sharp and strong serrated peeler that will do the job. But you need to pretend that you’re Tom Hanks holding onto Wilson the volleyball while you do it.

I refuse to tell you how to do it with an electric drill and a bucket.

Holy hell, I didnt realise you were talking about peeling, either.

Peeling with a saw is a top example of using the wrong tool for the job. If you are lucky enough to not break the blade or hurt yourself, the mess and waste ought to be enough to convince you.

The fact that hacksaws are not sold as pumpkin peelers ought to tell you something, too.

Kaleokahu’s microwave version above is your answer.

It’s for both splitting and peeling. Just the peeling was the harder one to find a solution for. I’ve done the microwave solution before. I don’t know, not sold on it, will try it again to remember my reservations. For a hubbard, I don’t think a vegetable peeler will work even after microwaving. I have a serrated peeler, but not the brand mentioned. I have cut myself really bad with it before.

I was using a serrated bread knife to peel for a while similarly to what kaleokahu called “Classic&Easy”, but those dull very easily, sharpening them is a chore, and professionally sharpening them is expensive. After I remove the paints off my saw blades I’ll do all these methods here again and report back.

For peeling the really tough ones, chunk them first, then peel the chunks using a really sharp paring knife or even a box cutter.

For me, squash is like a lot of fish–why bother taking the skin off?

I’ve found that once a squash is split, it can be quite easily further subdivided–much like a melon. The “skin” can then be removed with a sharp knife. Personally, I wait to carry out this step until the squash is baked in the oven–or steamed in the steamer. But that’s just me.

drrayeye, actually I will do this with really fresh ones, but the drier ones, my knife skills need work because I always cut myself. (Also, occasionally I need a more even sized chunk.) I am practicing sharpening my knives with a stone these days, not good at it yet. But my thought is maybe it’s because my 3-stage electric sharpener isn’t good enough.

Thanks again everyone for chiming in. You’ve given me a lot to think about and hopefully I can refine my intuition and process. I enjoy the journey as much as the destination.

Bin them and go buy a new squash – and keep chanting “use the right tool for the job”.

At my house, it’s the large knife and a wooden meat mallet.

I would think this is simpler and also safer. With a knife and a mallet, you can keep both of your hands away from harm’s way. Using a saw is fine, but one should be more careful.

You’ve certainly elicited or provided alternative ways to cut and peel winter squash–some safer than others. Unlike you, worrying about your personal safety, I approached the problem worrying about damaging my knives.

Higher end Japanese knives can be sharper longer, lighter, and more nimble than traditional European competitors, but more susceptible to chipping when they encounter something very hard–like a bone–or an acorn squash. I chose the cutting of acorn squash as a chipping challenge for several new Japanese knives I was purchasing.

I determined that my best knives for splitting the squash were traditional European designs that resisted chipping and could be easily honed and sharpened. For splitting, I found myself relying on an old carbon steel butcher knife–my 7 1/2 in. “Sir Lawrence.” Once the squash was split, and/or further subdivided, my Japanese knives were great for the detail work at much less risk for chipping.

I can see the advantages of a saw for splitting–especially the Gerber Myth suggested by TanukiSoup–but I’ve found that my butcher knife alone was satisfactory for splitting if I was patient enough: pushing and pulling–and changing the angle a few times.

occasionally I need a more even sized chunk.

I am wondering what it is that you make with your squash. I can’t think of anything I make with hard squash that involves a problem with the size/shape of the pieces. Or do you have issues with dexterity/hand strength/vision? It sounds like you use squash often. If you explain the dishes/recipes you are making, it might lead to some practical suggestions to make preparation easier.