If there is no Penang, Ipoh would’ve been regarded as Malaysia’s food capital. A mere two hours’ drive from Penang, Ipoh is the state capital of Perak, the Silver State. Despite the proximity between the two foodie cities, Penang and Ipoh could not have been more culturally and linguistically distinct.

Whereas Penang has a largely Hokkien Chinese populace, with a large Teochew minority, Ipoh is a staunchly Cantonese Chinese city, with a large Hakka minority. If one visits Ipoh and fails to speak Cantonese, a local Ipohian would politely enquire if one is visiting from Penang or Singapore (two neighboring cities where the Chinese could not speak Cantonese) as local tourists from Kuala Lumpur are largely Cantonese speakers like Ipohians.

Ipoh itself was built on riches from tin mining during the 19th-century. At the time, mainly Cantonese and Hakka miners streamed into Perak state under the patronage of the British Malaya authorities from Guangdong in southern China to toil away in the mines.

Today, Ipoh’s main revenue is from tourism, especially local tourists who come to Ipoh for its Cantonese cuisine, with strong Hakka overtones. Ipoh is also famous for its “white coffee”, where the coffee beans are roasted with sugar and margarine. The taste of the coffee brew here is simply stupendous - to be found nowhere else in Malaysia.

Ipoh is well-known for its many unique local street food dishes, and one of my personal faves is the “kai see hor fun”: delicate flat rice noodles (“hor fun”) in a light chicken-and-prawn broth, topped with shredded poached chicken meat (“kai see”), shrimps and scallions. The broth normally has a light orange-ish tinge, a result of parboiling shrimp-heads and shrimp shells to obtain their flavor for the soup stock. 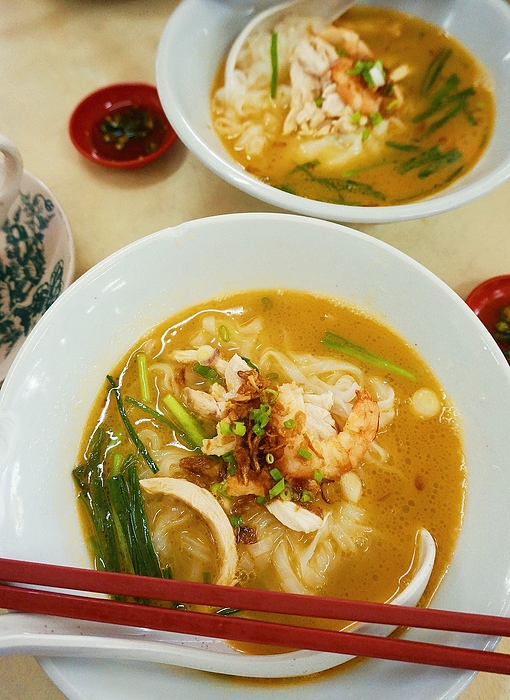 Interestingly, this dish has Hokkien origins - and only the Hokkiens, among all Southern Chinese ethnic groups, would actually combine meat and seafood to obtain a soup stock. The two oldest purveyors of “kai see hor fun” in Ipoh - Thean Chun and Loke Wooi Kee - were both founded by Fujianese emigrants from Nan’an, Fujian, and their descendants now still dominate the “kai see for fun” market in Ipoh, with long queues at their stalls each day.

But the Hokkiens have always used their yellow Hokkien wheat noodles in all their noodle dishes, whereas the Cantonese preferred “hor fun” - thin, flat white rice noodles. Early purveyors of Hokkien prawn noodles (similar to those in Singapore and Penang) switched to “hor fun” upon their Cantonese customers’ requests, thus inadvertently inventing the Ipoh-style “kai see hor fun”.

Nowadays, there is a very popular spot for this dish which is much-favored by local Ipohians: Moon de Moon, where we breakfasted at yesterday. Located in one of Ipoh’s outer suburbs, Moon de Moon opens at 7am each morning, and one is strongly encouraged to be there before 8am to avoid the peak breakfast-time crowd. Waiting time, even then, ranges from 30 to 45 minutes, as local Ipohians seemed to rate this place as their #1 spot for “kai see hor fun” over the two older stalwarts, Thean Chun and Loke Wooi Kee. 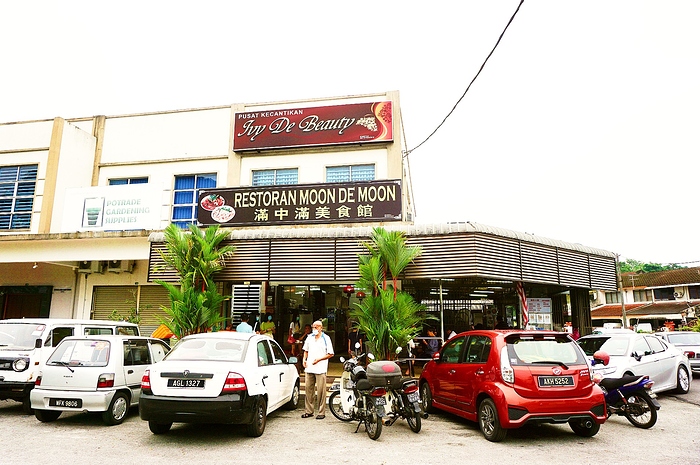 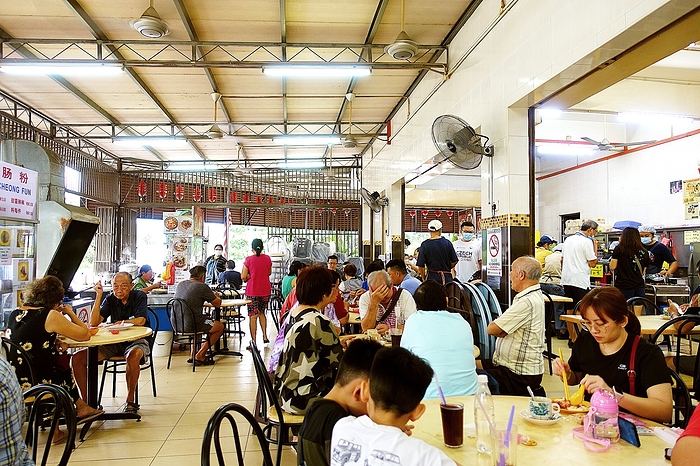 Moon de Moon has come a long way since back in 2013 when Ipohians came here for their dry curry mee, which could entail a one-hour wait even on quiet days. They still serve the dry curry mee, although its popularity has been overshadowed by the kai see hor fun these days. Personally, I found their rendition of the “dry curry mee”, with its chicken-and-potato curry, to be too salty and spicy for my liking. It lacked the flavors and aroma I expect from good curries. 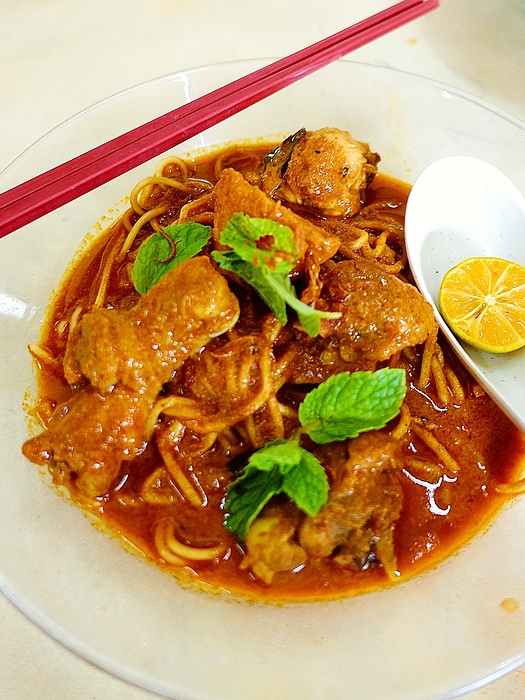 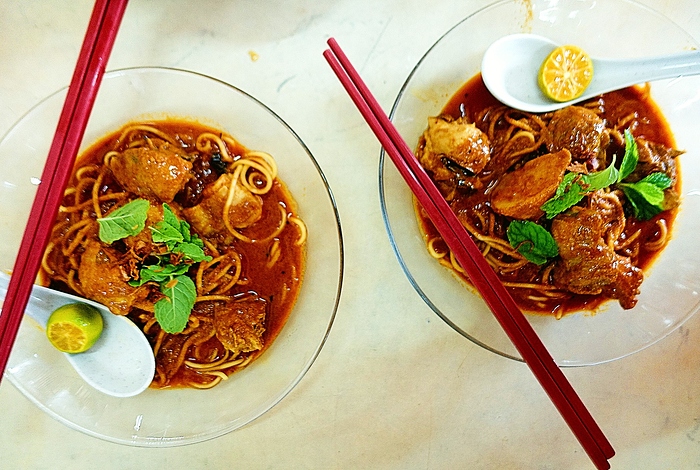 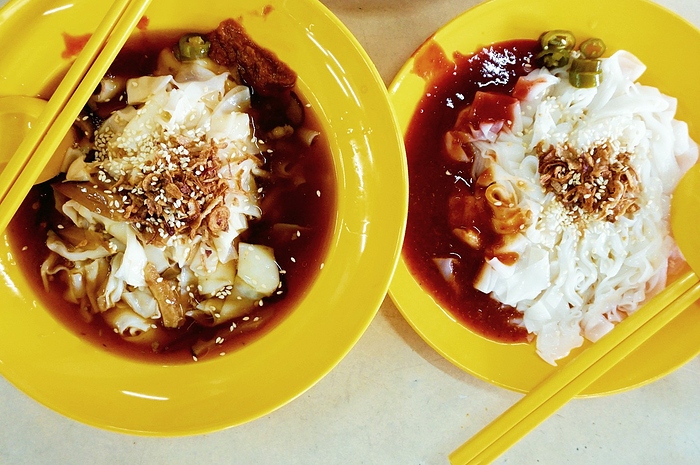 One can also order “chee cheong fun” with a savory braised mushroom sauce, which actually tasted much nicer than the sweet bean sauce version. 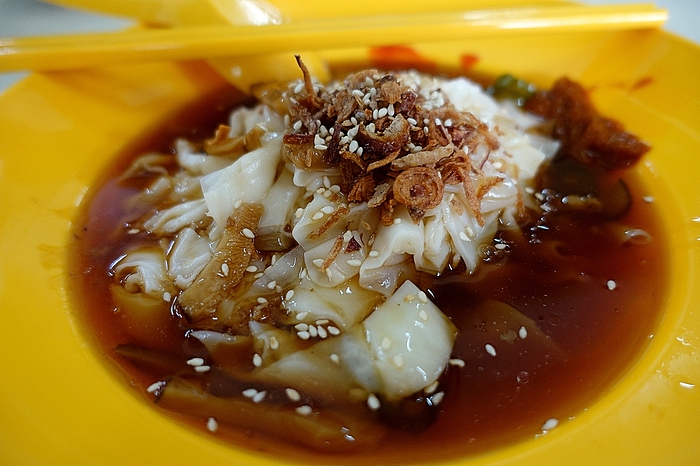 Malaysian chee cheong fun evolved differently from its Hong Kong counterpart. But, even then, each Malaysian state has its own slight variant:

The piece de resistance at Moon de Moon, of course, has to be the kai see hor fun, which finally arrived after 45 minutes. The hor fun noodles here seemed to be translucent, rather than the opaque version one finds in every other “kai see hor fun” spot in town.
The rendition here seemed to have a much stronger prawn flavor, overwhelming the chicken component in the broth, rather than the well-balanced prawn-chicken taste which characterizes this dish at both Thean Chun and Loke Wooi Kee. Moon de Moon’s version is also almost cloyingly sweet. Oh well, Ipohians’ taste preference, I suppose. 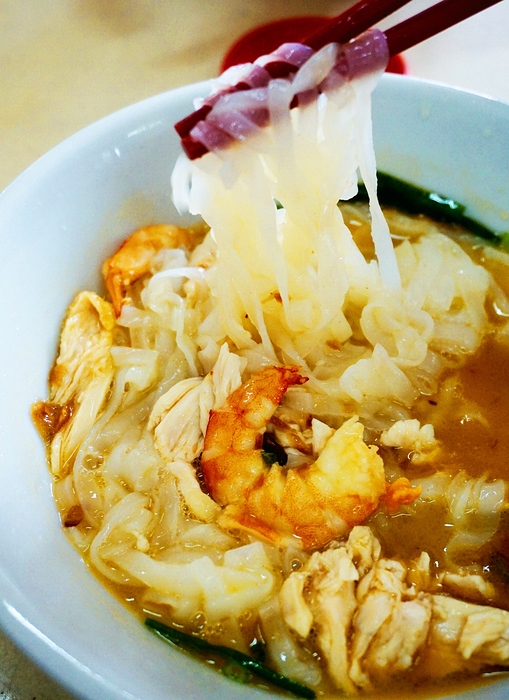 A must-not-miss side dish to order here, IMO, are the Foochow/Hockchiew fishballs, which have minced pork filling. We ordered a bowl of the Foochow fishballs, and some pork-meat balls - both types were very tasty. 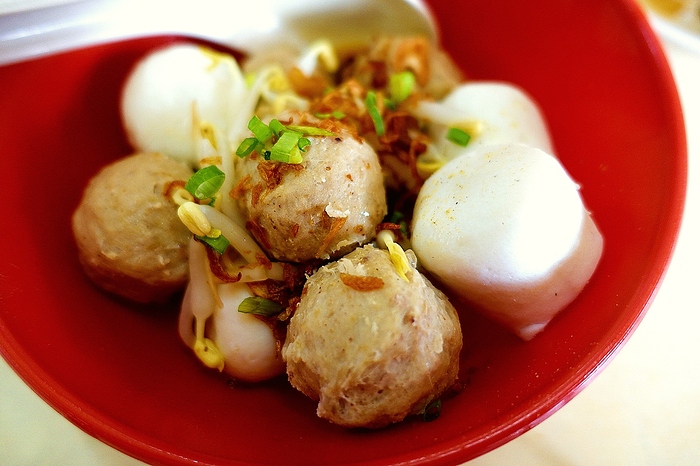 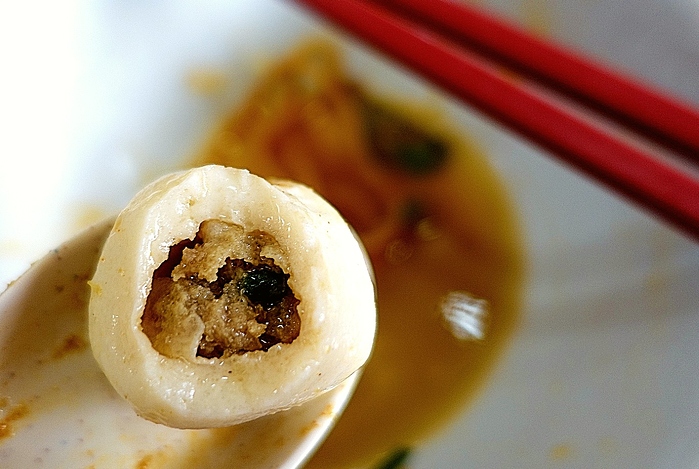 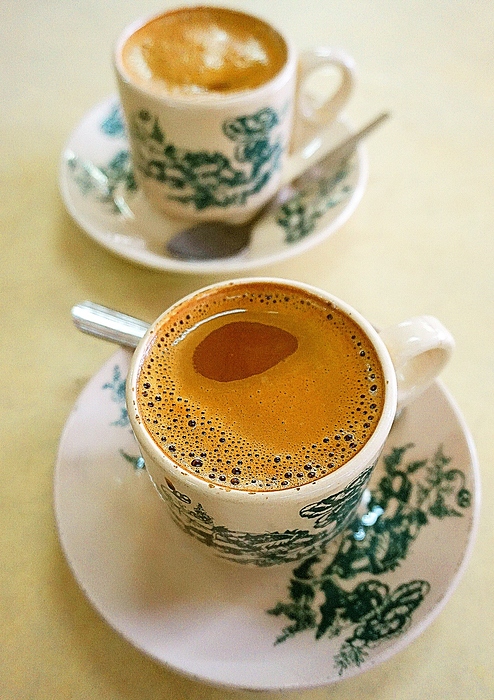 Way too spicy for me, actually, @Presunto! It was not what I expected at all - since the curry noodles were very much talked-about. But every other curry noodle dish I’d had in Ipoh over the last weekend tasted better than the one here!

Is the excess spiciness masking something? But this place is very popular with the locals and you thought their curry noodle were not to your taste…?

Is the excess spiciness masking something?

But this place is very popular with the locals and you thought their curry noodle were not to your taste…?

The curry noodle dish was popular back in 2013, and was Moon de Moon’s claim-to-fame then.
But nowadays, Ipohians come here for the "kai see hor fun** instead, and seemed to have largely ignored the curry noodles.

Too bad about the spicy curry noodles. Hope you didn’t eat that first and ruined your palate for the rest of the meal.

Too bad about the spicy curry noodles. Hope you didn’t eat that first and ruined your palate for the rest of the meal.

I actually did have that first, but didn’t go beyond the first mouthful!

But, it has always been this spicy, even back when it was popular? Maybe people can’t tolerate the heat anymore. Or they have made it even spicier.

I read somewhere that chili-heads are addicted to the endorphins which their bodies produced in reaction to the chilis they consume!

Mind you, Ipoh-style curry noodles I tried elsewhere were absolutely delicious. Just not the supposedly “famous” (or used to be) one here.

Now you know, next time order something you haven’t tried.

But if they still have it on the menu that means it’s still selling.