Singapore’s first Michelin-starred hawker, Ipoh-born chef Chan Hon Meng aka Hawker Chan, has decided to return to his roots - bringing his famous soya-sauced chicken rice back to his hometown.

Well, many Ipoh foodies expressed their consternation when Hawker Chan announced last year of his intention to open a branch in Ipoh, a largely Cantonese city known throughout Malaysia and Singapore for the excellence of its Cantonese cuisine. It’s like carrying coals to Newcastle, they said - Ipoh is where one can find dozens of good chicken noodles/chicken rice restaurants. Personally, I’d had char-siew and dim sum in Ipoh that tasted as good as those from the best spots in Hong Kong. Foodies from Penang and Kuala Lumpur would drive all the way to Ipoh for its Cantonese food! 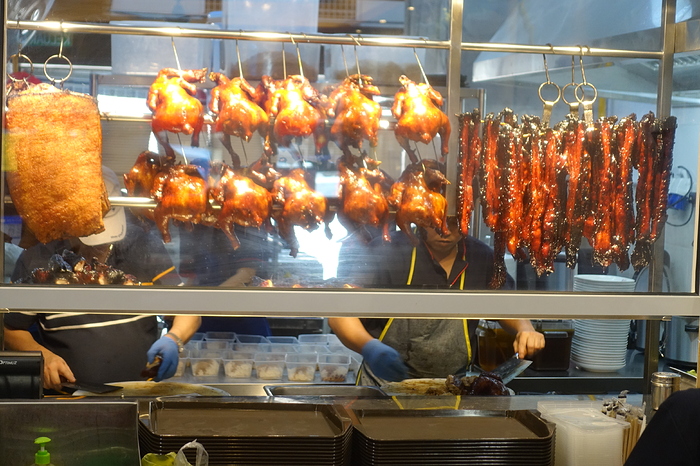 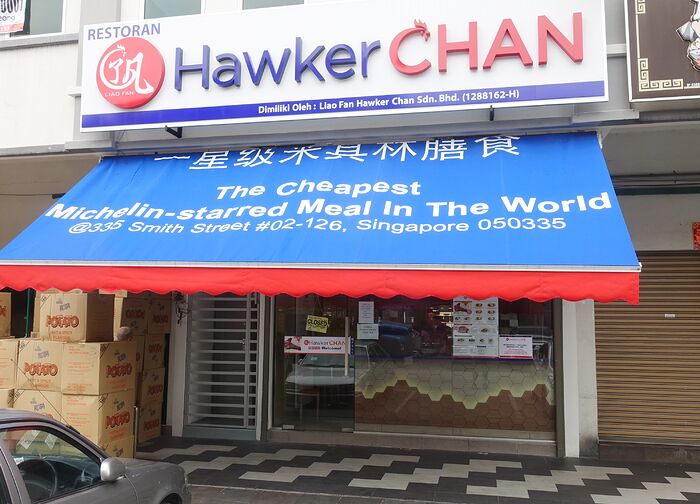 Surprise, surprise, when I was there yesterday, it was Day Four after Hawker Chan’s official opening, and his new Ipoh branch was inundated by eager customers half an hour before its 10.30am opening time! And everyone seemed Ipohian except me! 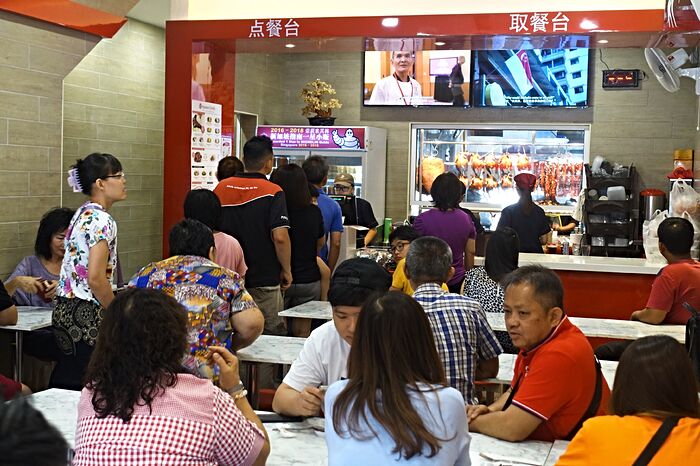 Prices are cheap, as befits a brand which touts itself as the world’s cheapest Michelin-starred eatery. A standard chicken rice set will cost one back only MYR6.80 = US$1.68 or £1.27! 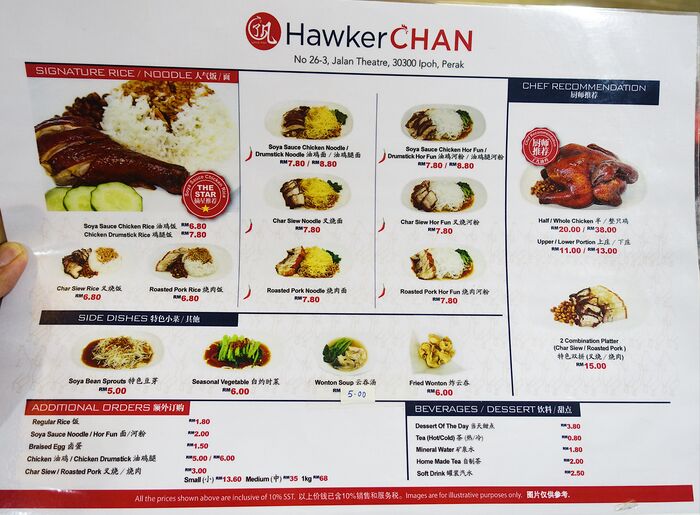 I opted for a set with chicken drumstick (which also included soy-braised soybeans), plus additional char-siew (the caramelly BBQ pork, Cantonese-style), siew yoke (roast pork with crackling skin), and a plate of choy sum - leafy greens dressed in soysauce and topped with crisp-fried garlic. 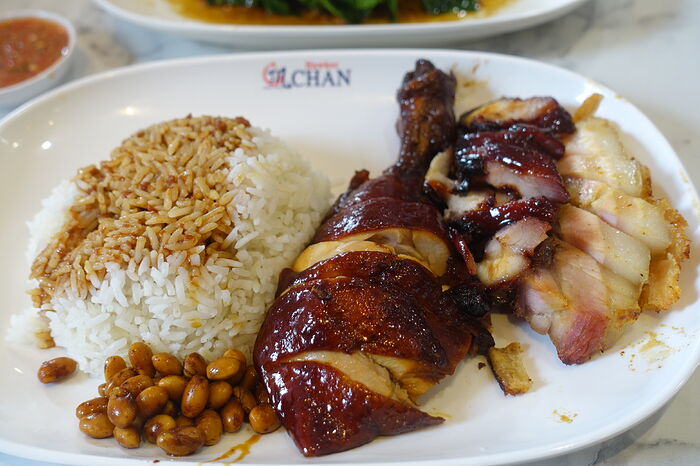 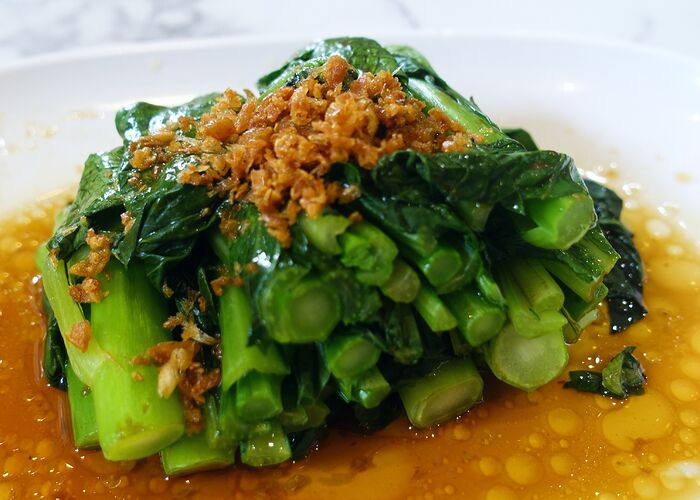 Personally, the dish was a bit too sweet for my taste - the soy-based sauce used for braising the chicken is very caramelly. The same sauce is spooned over the steamed white rice as they plate one’s order. The vegetables are bland-ish, and overly-greasy - I have the same problem in Hawker Chan’s Singapore branch on Smith Street as well. 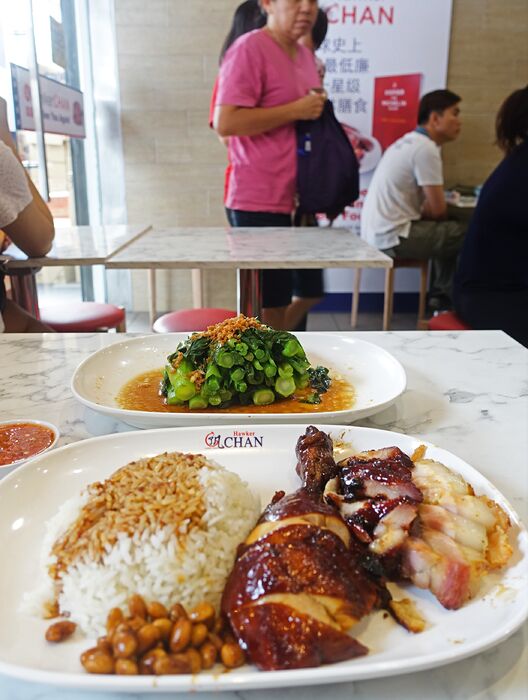 The crowds are still pouring in non-stop as I finished my meal there - I’m guessing more out of curiousity than anything else. Food from other eateries around that neighbourhood alone would taste as good, if not better than Hawker Chan’s - I can think of Ipoh chicken noodle/chicken rice stalwarts like Onn Kee, Lou Wong and Pak Kong, all within 5 minutes’ stroll away.

In the meantime, Ipohians’ fascination with having an outpost of a Michelin-starred eatery opening in their town continues.

The Hawker Chan chain, which took advantage of the Michelin-star rating given to
the original Singapore outlet to tout their business, has just lost that: 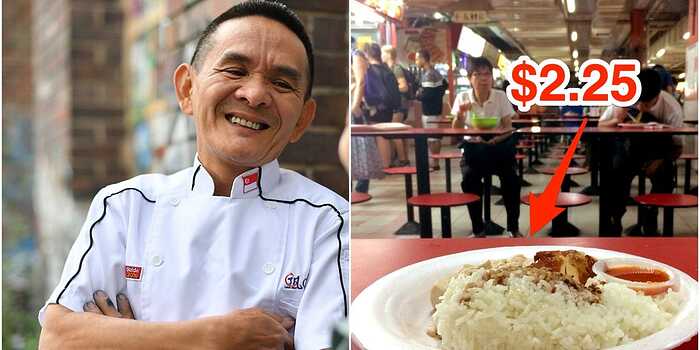 A Singapore restaurant with the cheapest Michelin-starred meal in the world...

Chef Chan Hon Meng rose to fame in 2016 for owning one of the first Michelin-starred food stalls in the world. Five years later, he lost it.