Hey everyone!
To most people, Indian food is almost always synonymous with tandoori chicken, chicken butter masala, naan, kababs and so on. I recently had the pleasure of trying out some rather exotic regional Indian dishes, including a beautiful Kerala style chicken roast, fantastic prawn curries from India’s southern coast as well as a tribal pork dish from the northeastern Indian state of Mizoram. Ranveer Brar, a renowned Indian celebrity chef, mentioned some of his favourite regional cuisines in an interview question here https://www.xpert.tv/question/tell-us-about-some-of-the-most-interesting-cuisines-you-encountered-on-your-travels-across-india/, and that got me thinking about how underrated India’s rich culinary heritage is. Have any of you guys tried any Indian food apart from the stereotypical North Indian dishes? Any particular region that you guys want to visit just to discover and explore the local food culture?

I am fortunate that a nearby restaurant, Ritu Ki Rasoi (Burlington, MA), does a weekly vegararian buffet dinner, each week featuring a different region. Gujurati cuisine was my favorite. What labeling there is tends to be misspelled (based on the cuisines I DO recognize), so I have no idea what the Gujurati dishes were. And there were certain herbs or spices I hadn’t ever encountered. I can’t describe the food, but it was fantastic!

Where I am in the world, most “Indian” restaurants are run by Bangladeshis, very much offering the same sort of generic food whichever place you go to. However, as tastes have developed, new restaurants are now addressing the market and it’s becoming much easier to find regional food. It’s fair to say that there is still a leaning towards food from the north of the country and, indeed, what was in colonial times India but is now Pakistan. We go to a place where the food from Rajasthan forms much of the menu. Others offer desi dishes from the Punjab and Kashmir.

The place we go to most often specialises in Mumbai street food and street food does seem to be the growth market. We also go to a couple of entirely vegetarian places specialising in Gujurati dishes. One of those also has a “South India” section on the menu - dosas and the like - but food from the south hasnt really yet taken off near me. One restaurant did open nearby and we went in 2011. It didnt last long but seems to have reopened on the far side of the metro area. Unfortunately, most of its menu now leans towards the north so not really worth the drive. Once, when travelling, I went to a restaurant run by Parsees - lamb dhansak was lovely and is, apparently, the traditional “Sunday lunch” family dish.

I wish there was a place near me that made Dosa, which I think is South Indian, but probably everywhere there, like BBQ ribs in the USA were not originally in the West of USA, but are now everywhere. There’s a place in Detroit called Neehee’s that does Indian vegetarian street food, including Dosas. But it’s a three-hour drive…

I really enjoy Indian sweet shops. I recently had the chance to watch ladoos being made and I was so inspired by the technique. Never met a ladoo or halwa I didn’t enjoy.

I am lucky enough to have traveled to India about 25 times as a result of my former career, almost all over the country (with the exception of the far northeastern states). I made it a point of eating local/regional cuisine everywhere I went, so I’d say I have a pretty good grounding in this topic. Indian regional food traditions are as varied as American regional foodways, perhaps even more so. I get depressed going out for “Indian” food in the US because so much of it is so boring, narrow, and cookie-cutter. If I can find non-northern regional Indian food, I get very excited. South Indian (which is very light on meat) has gotten more common in the US but I’ve never seen anything like Goan, or Bengali, or Hyderabadi, or Gujarati in this country, all of which are very delicious and totally different from the standard dishes you get here.

A belated welcome, @Clamshell! I’m curious where you tried these dishes, and where you are located.

I’m Indian, and I’d like to go to Kashmir. It’s the one cuisine that is very hard to find (in other parts of India, never mind outside the country

Even in India, for a long time restaurant food meant North Indian / Punjabi / Mughlai. In NYC where I am, Indian food is still more likely to be that, or then Pakistani/Bangladeshi. Recently there’s been growth in Nepali-Tibetan outlets given the immigration patterns.

The challenge for Indian regional cuisine is that you need someone from a region willing to cook the food professionally, and there was little interest that as a career path.

Another hurdle is customer palate. You can’t go to a Chettinad restaurant and still expect to order tikka masala- it’s like going to a French bistro and wanting Danish food. But that’s what happens. As a result, we have “South Indian” restaurants that serve full North Indian menus. “South Indian” itself being a too-broad bucket for anywhere that serves idli-dosai, even though the south of India encompasses a variety of cuisines, with distinct meat-eating and vegetarian traditions.

But I’m encouraged by the increasing diversity of regions represented by newer restaurant menus and chefs showcasing regional dishes.

It’s like the growth regional chinese food - once you’ve been exposed, you want more of it, and when customers are looking for something different, restaurants that service that can survive.

I am lucky that I live in the San Francisco Bay Area, where many Indian high tech workers live. And there are a vast variety of regional Indian restaurants that sprang up as a result. The cuisines get very specific too because they primarily cater to the Indian expats. Common ones are Andhra Pradesh, Tamil Nadu, Telegana, Maharashtra. There are maybe one or two Keralan.

You can’t see it very clearly, but I truly enjoyed this Meen Pollichathu pompfret dish at the Keralan joint, just a little eating area within a market. Not a dish that can be found at the typical North Indian curry house. 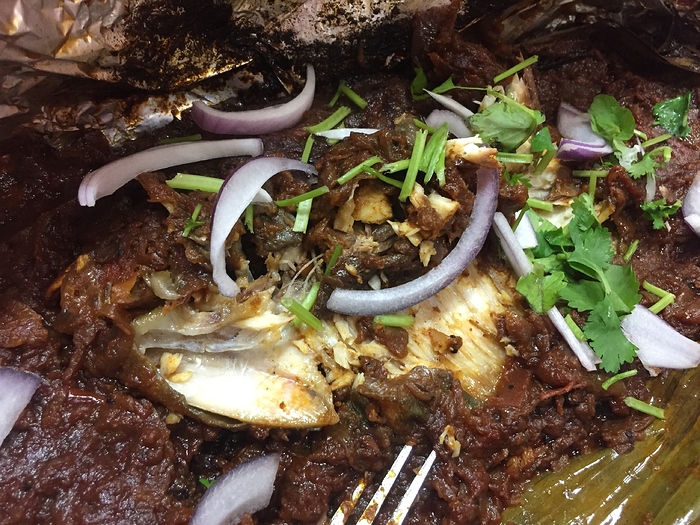 Kashmir. It’s the one cuisine that is very hard to find (in other parts of India, never mind outside the country

By co-incidence, the restaurant we went to last night has suffered an identity crisis for years. Part of it’s on/offline advertising used to describe it as the “home of Kashmiri cooking”, whilst other parts of, say, the website would describe it as the “home of desi Punjabi cooking”. They’ve had a revamp and come down on the side of being Punjabi, now describing their desi dishes as being in the Lahori style.

My guess is that the reference to Kashmir relates to the owners originating from a nearby city which has a significant Kashmiri population (and is home to the only “declared” Kashmiri restaurant I know). Now, when I say “significant”, that’s in the context of Wikipedia telling me that the UK is home to only a few hundred families of Kashmiri origin.

It’s really a pity. Kashmiri cuisine also has distinct subcuisines in that there is a Hindu culinary tradition and a Muslim one, as in the south. But they’re all very hard to find unless you know someone. One of my family’s most memorable trips (I missed it) was a wedding in Kashmir - if you search “wazwan” there’s a whole separate tradition of wedding food cooked in multiple courses, and chefs who specialize only in that.

Further to identity vs what sells, one of my favorite “South Indian” lunch spots here does a great thali, but in addition to 2-3 options that are actually of some southern origin, there are the standard tandoori thali and tikka masala thali, and looking around, those get ordered much more than the others.

I’ve mentioned this elsewhere before, but there was a certain culinary flexibility expected in indian restaurants, even in India - “Punjabi/Mughlai/Chinese” was the common combination for many mid-level restaurants. Hence the term “Punjabi Chinese” to distinguish between indianized chinese food available at those places, vs “chinese chinese” ie food cooked by chinese immigrants - the latter being considered more “sophisticated” - but I never met an indian who didn’t at some point crave indianized hakka noodles and chili chicken

To the OP, I’ll add that to my list - Indian Chinese. Also very hard to find in its “correct”

Indian Chinese. Also very hard to find in its “correct”

Our favourite local Indian restaurant serves Mumbai street food and includes a fair selection of Indo-Chinese dishes including Hakka noodles and chilli chicken. Obviously I have no idea how authentic they are - although the owner (whose family are of Sindhi heritage) certainly makes the claim. By the by, his business partner is Iranian and she’s been instrumental in them trying a few Irani dishes as “specials”. I gather from chatting that there’s been an Iranian community in Mumbai for a century (fled Iran to avoid persecution).
So there’s another one for the list -Iranian Indian food

Two vintages of Iranian cuisine in India - “Parsi” from the first wave, pre-10th century, which adopts many Gujarati traits (that’s where they landed and were given refuge), and “Irani” from the second wave, 19th century, which has more recognizable Persian dishes.

“Irani” from the second wave, 19th century, which has more recognizable Persian dishes.

Apparently, Zoroastrians fleeing Islamic persecution in the middle of the century.

Last visit to the restaurant, we were offered a freebie dish (name of which I’ve forgotten) and it was definitely Iranian/Middle Eastern flavourings, rather than it having an Indian influence.

Haldi in NYC 's Curry Hill specializes in food from Kolkata and includes dishes inspired by the city’s population of Baghdadi Jews. Would that be the kebabs on these menus?

They were pretty formulaic -the same owners had about 5 restaurants in that stretch with a single “concept” chef at the head (one of the two from Mela).

I think they may actually have shared a kitchen with the next door place - Bhatti. So it was mostly marketing that differentiated them. At lunch, same menu from the same kitchen.

Other than the usual North India restaurants, I’ve only eaten at a South Indian place once. I have cookbooks of several of the regions and several general Indian cookbooks, so that’s how I explore regional Indian food. I don’t usually have access to all the ingredients for it to be exactly right, but it’s still interesting and good.

I spent 3 weeks in India. One of them was specifically spent in Kerala, just for the food. Like many others, my wife and I got very sick during the trip but that didn’t stop me from enjoying the food immensely. Service is incredibly slow there, but that gave me time to run to the bathroom between courses.
I’m fortunate in that the 3 months of the year I spend in NYC are in Queens where there are several Keralan restaurants.

Queens where there are several Keralan restaurants.

@ElJefe which are your favorites? I’ve come across Taste of Kerala and Taste of Cochin.

In addition there are slew of other “southern” type restaurants in the area.

Those are the two I go to most often. I usually go to Taste of Cochin for their weekday lunch special. They always have 3 or 4 Keralan dishes on the buffet, including idly or medusa vada and a thoran or avial.
Taste of Kerala Kitchen has changed names 5 or 6 times over the past 10 years but it’s the same extended family at the front of the house. They have a much better selection at dinner including more non-veg dishes.
Five Star in Nassau is also good but I haven’t been there in over a year.