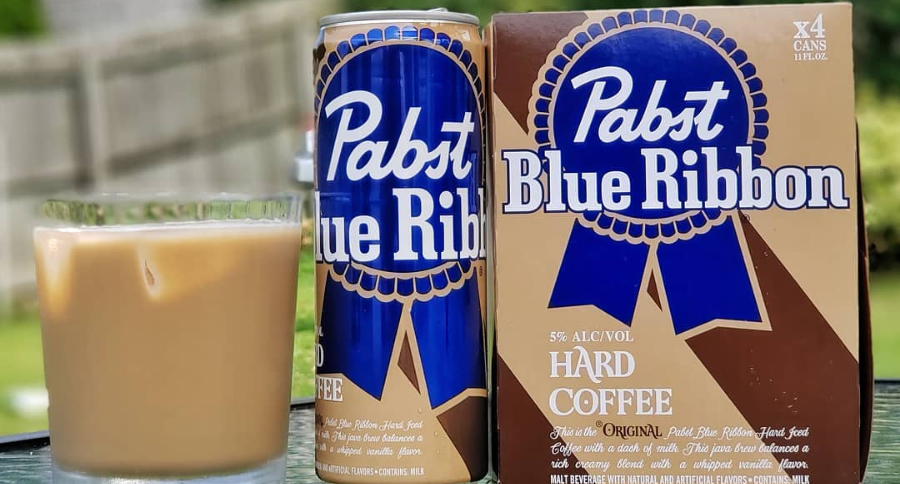 PBR Just Released a Hard Coffee With Alcohol and Caffeine

Have you ever wanted to combine your favorite beer brand and coffee? Your dreams have come true. New Pabst Blue Ribbon Hard Coffee is now avaliable.

what, it’s just like Irish coffee or a black russian with an extra shot … though it being a PBR product does seem odd

I like a chocolate stout on occasion - which gives a nod towards a coffee sort of bitterness. The PBR part of the equation is the odd part. But it has been many years since I drank PBR so who knows? Worse case the opened beer could become part of the liquid for a pot of chili!

It certainly doesn’t float my boat! Coffee is for morning, and the afternoon is for alcoholic libations! Who wants to be a wide awake drunk?

In all seriousness though, I do like an occasional Irish coffee, however.

I tried someone else’s hard cold brew coffee recently (Cost Plus World Market carries it). Most of the other versions out there contain malt liquor as the alcohol element, like the hard seltzers. It wasn’t bad, but if I want boozy coffee I’d rather have either a coffee stout or a liqueur.

I’m lucky these weren’t around when I was in college. I have a feeling these will be a hit with the college crowd. 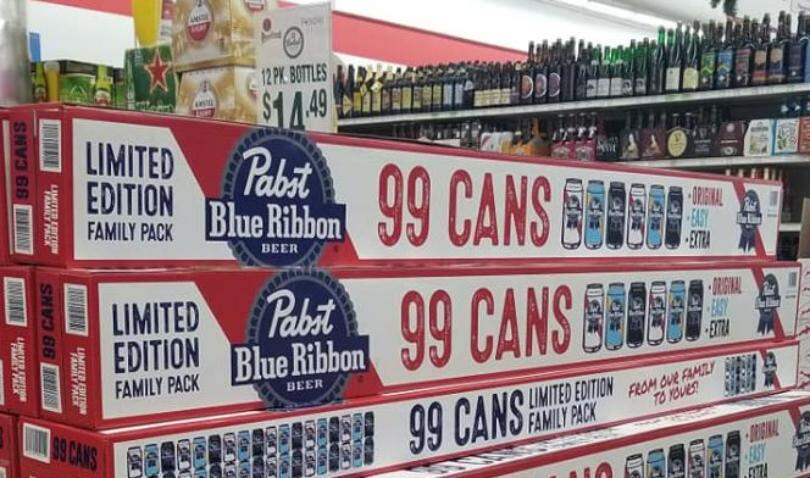 I’d get this for my brothers/family . . . they’d think it was insanely funny. Will have to keep an eye out. 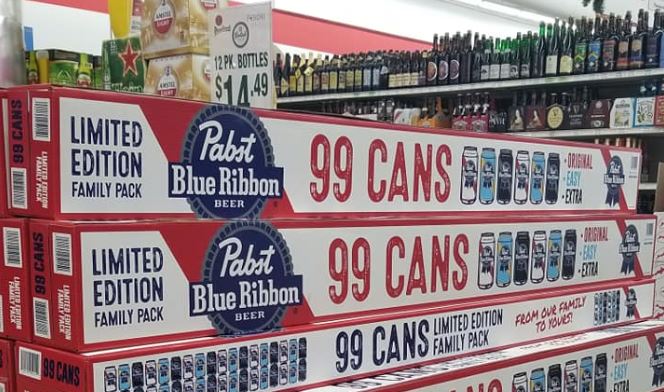 Some customers traveled more than an hour to get their hands on one of the limited edition packs.

I bet that will be worth money decades from now.

How do you carry that out? It must be reinforced somehow.

I bet that will be worth money decades from now.

Let me give you a lesson in marketing 101. Chances are anyone who buys a 99 can case of Pabst Blue Ribbon, isn’t doing it as an investment. More than likely they are buying it to wash down their Popeyes chicken sandwich!

I’m pretty sure most of those are getting torn into out in the liquor store parking lot. PBR 99 PACK: 3 for the road, 96 for home

If you see any locally let me know. I will pick one up.

I like that it’s called a Family Pack - one for dad, one for you grandma, one for junior, one for the baby…

(oops, sorry, didn’t realize this was a month old until after I’d hit “post”…)

Hmmm… First there was “hard lemonade”, then “hard seltzer”, now “hard coffee”… WTF? is the draw that these things make people feel like they’re “not really drinking alcohol”? Or is it just the ever-growing trend of people not actually “preparing” anything to eat or drink for themselves no matter how much they have to pay for the “convenience” of not having to open two cans or packages of “non-prepared” foods to get the equivalent, or to pour two different liquids into one cup?

Millennials are probably to blame

Yeah… you’re probably right. I don’t automatically blame Millenials for much, but by the time a second generation has been raised primarily on convenience and takeout/fast food, I guess I shouldn’t be surprised and can’t entirely blame 'em for not wondering why people don’t just buy a bottle of cheap vodka and pour some into their <whatever>,

Oh, and there’s that double-whammy in that in most jurisdictions, you can’t buy vodka at the closest convenience store or from Amazon…

not wondering why people don’t just buy a bottle of cheap vodka and pour some into their ,

Excuse me Sir, I resemble this comment. (with exception of cheap vodka, I’m not a savage)

Oh, and there’s that double-whammy in that in most jurisdictions, you can’t buy vodka at the closest convenience store

That might actually be a factor. WA had state run liquor stores up until a few years ago. You could get beer and wine at the grocery store but not hard liquor, these pre-mixed drinks might be low enough ABV to be sold everywhere.

Unlike California, otoh, where you pretty much can buy vodka at the closest convenience store…

(I was amazed - delightedly - to discover on my first trip out there a huge, and rather good, liquor and wine section at one of the local chain drugstores…

But back to the hard lemonade/seltzer/coffee Thing, I was thinking in terms of the “convenience factor” of not being to buy vodka as easily (in most places) - it amazes me what so many people consider “inconvenient” these days, and not just Millenials -, but that’s an interesting point. NYS never (afaik) had state-run stores like some states, but we do have a pretty byzantine ABC system that limits who can sell what and where (among other things), and lower ABV “beverages” like these can be sold under a “beer license” here too. (Which in accordance with the arcana of our ABC laws, is a “beer” license, not a “beer and wine” license. For reasons known only to the NYS legislature - or some part of it and their industry supporters anyway - you can buy beer at supermarkets among other places, but not wine, and liquor/wine stores can’t sell beer. Or mixers and other non-alcoholic beverages, or even ice, last I heard…

I spent a bit of time in Upstate New York and found the liquor laws bizarre, Canada is worse.

I live in Texas and liquor can only be purchased in liquor stores which are closed on Sundays.

In the neighboring country of Louisiana anything goes, you can buy Crown Royal at a gas station.