Some of you may have heard me bemoaning the fact that I have cooked the same exact Northwest grilled salmon almost every week for thirty years. My husband has heard this as well, so this week he bought halibut filets. More bemoaning ensued. It’s so expensive and so hard to cook.

I wanted something cooked in tomato sauce, and poaching sounded good.

I found these recipes, and wondered why I can’t “oven poach”.

I tried it with shakshuka and folks said stovetop is easier control. 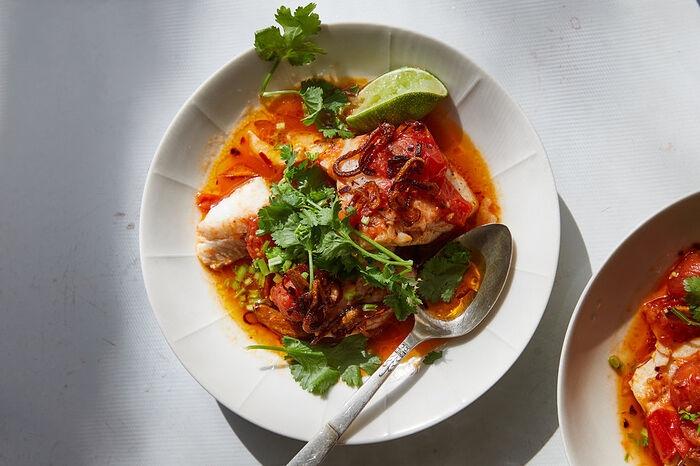 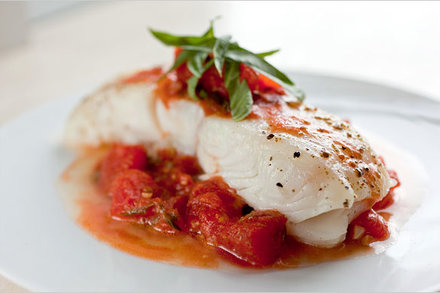 This is a pungent tomato sauce that I learned to make in Provence It goes well with any type of robust fish.

When I put the filets in to “oven poach” 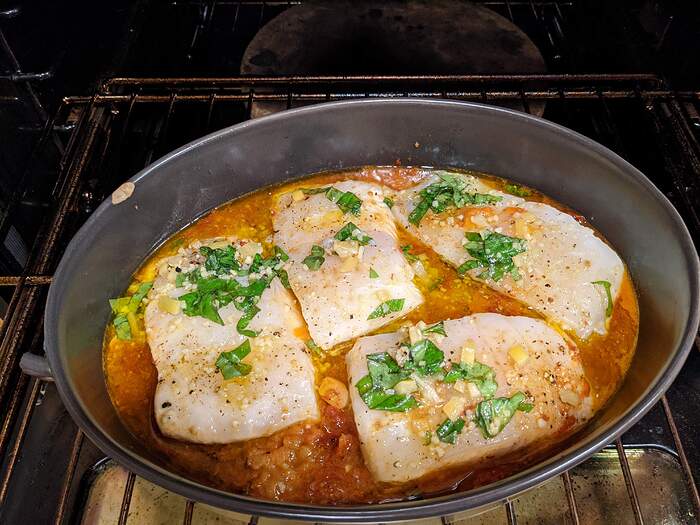 When I freaked out, took mine out, and put husband’s back on on convection broil. 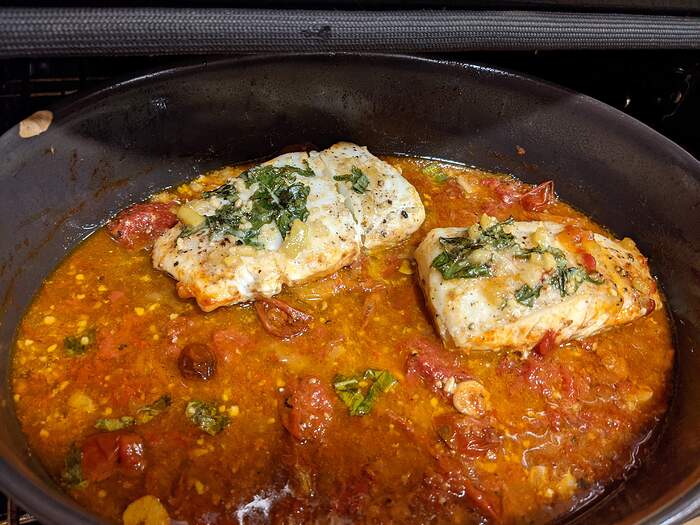 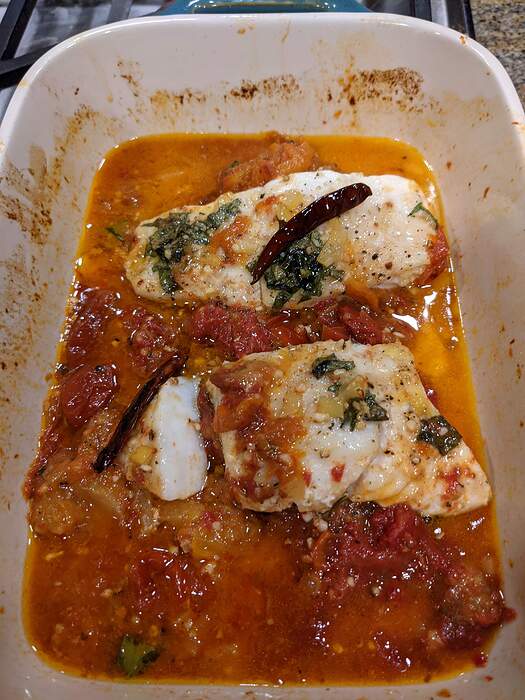 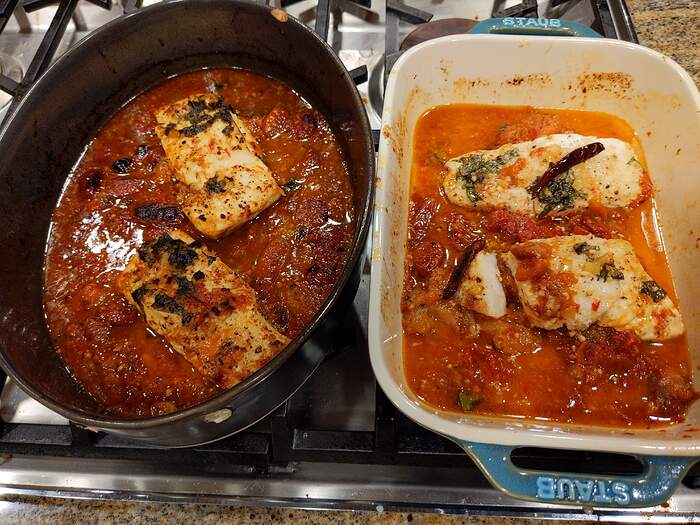 The two west coast halibuts are very distant cousins. Northern coast (Oregon, Wash…) are much richer and therefore much more forgiving. Central coast, SF and friends, is much leaner and needs more gentle cooking. I usually just moosh either in salt, pepper and olive oil, then pan broil over gentle heat until just cooked through. Adding a sauce, if desired, after plating.

I don’t know what kind of halibut this is. I’m going to check that out.

Can you say more about “pan broil with gentle heat” . No searing? I find it easier to poach until "Just cooked through " but that is where husband and I part ways.

Husband said “sauce was nice but overpowered the halibut”.

He’s getting to be quite the recipe tester!

I usually cook halibut plaki-style, topped with sliced tomatoes, sliced lemons (I remove the pith and rind, some ppl don’t), sliced onion, oregano, pepper, sea salt and olive oil, or an Indian variation of this, sprinkling the halibut with curry powder, topping it with olive oil, onions, garlic.

Sometimes I make it Veracruz-style

I had roasted tomatoes of more than one persuasion to use, and I ended up using chopped preserved lemon peel rather than the lemon in the recipes. It was pungent!

I haven’t made this with halibut, but we really enjoyed it with trout a few weeks ago. Would be good on Halibut, cod or haddock, I think, as well as char and salmon. 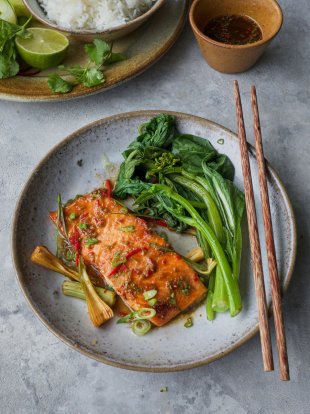 I love this simple way to cook trout. Combine spring onions, ginger, chilli, coriander and lime with a little soy and mirin, then pour over the fish and cook in the oven for 10 minutes. A lovely little fish dish full of aromatic flavours.

You almost have to look at it like cooking venison. Super gentle. It dries out quickly.

Thank you!
Unrelated but there was a link for trout crudo! I love crudo, but isn’t trout usually fresh water?

Because halibut is so mild flavored, I usually serve it pretty simply. beurre blanc, brown butter and capers or simply a squeeze of lemon.

The Jamie Oliver recipe appears to use sea trout, which is more like salmon.

I was thinking that, but couldn’t tell from the recipe. I know they are available in the US, but wonder if they are less common.

Ina Garten’s mustard-roasted fish is my go-to for halibut. I rarely use the creme fraiche, I find a combination of Greek yogurt and mayo (I use a 3:2 ratio) is almost indistinguishable in this context. Every time I make it I wonder why I don’t more often. Leftovers are fabulous cold right out of the fridge I happen to know.

When I freaked out

What was the issue?

Aside from the oven, you could steam with whatever seasonings - either on a plate or in parchment packets (that works in the oven too, obviously).

I think halibut is nice with gentler flavors from any cuisines. So light soy-ginger-sesame oil for Chinese, or a mild coconut curry (malai curry) for Indian rather than spicy, or a pat of compound butter - miso, herb, etc - en papillote, and so on.

I do agree that it’s tricky if you want the fish cooked till just done, rather than over.

What was the issue?

I thought about visual appeal, flavor and texture added with pan searing or grilling, but I didn’t want it more done than I would enjoy. The fish in the pictures cost about $45 USD ( Can that be? I’ll check .) In any case, I wanted to enjoy that.

About 15 years ago I went on a trip to Alaska and stayed at a fishing lodge for a couple of days. I caught a lot of fish, and shipped home 40 lbs of frozen vacuum-packed halibut filets. Needless to say, there was a lot of experimentation with cooking halibut. What I came down to as my two go-to methods were: #1, completely wrap each filet in pancetta and saute it on medium heat for about 4 minutes/side. #2, heat up about a half-inch of olive oil with some rosemary in it and then poach the halibut in the oil, in chunks or as a filet. Both have the benefit of not letting the fish dry out—halibut doesn’t have a lot of fat and dries out quickly—and flavoring the fish nicely while still letting its essential halibut-ness come through.

Thank you! How much does the thickness of the filets or steak matter? How to accommodate for what you have? It seems important in various recipes, but I have to (ask husband to ) pick what seems best where we shop.

I remember reading an Eric Ripert (Le Bernardin) trick to dust in Wondra before pan-frying - very thin coating, and crisps up without getting gloppy like regular flour. I guess rice flour or cornstarch would also work.

Good ideas! I almost used a serious eats recipe with egg and panko on just one side, but because these filets were only about 1 inch think, I was pretty cautious, so no sear .

It was good though, for both of us ( son and DIL deferred. Yay!), and I will try again. Might also try other flaky white fish.

Yeah I was thinking it was more a gateway to other fish - sounds like he’s open to mild white fish, which is great!

Cod is pretty similar in use (though I do prefer the flavor of halibut).

Is swordfish a no-no? I guess the texture is different.

egg and panko on just one side

I like fresh breadcrumbs on top if you’re baking - they crisp up nicely. Flavor them slightly with garlic and herbs and toss with some melted butter or oil first.

Another good Indian version is semolina-crusted fish - cut into smaller pieces, use a spice paste, then coat with semolina, let it set for a while, then shallow or deep fry.

You could also broil simply.

Cut into 1 inch bite size pieces, toss in corn starch, then marinade in your choice of sauces (I prefer a soy, ginger, sesame concoction, with an emphasis on ginger).

Then stir fry with more slivers of ginger and scallions.