I need to nominate this post as the most stupid food reporting of the year! 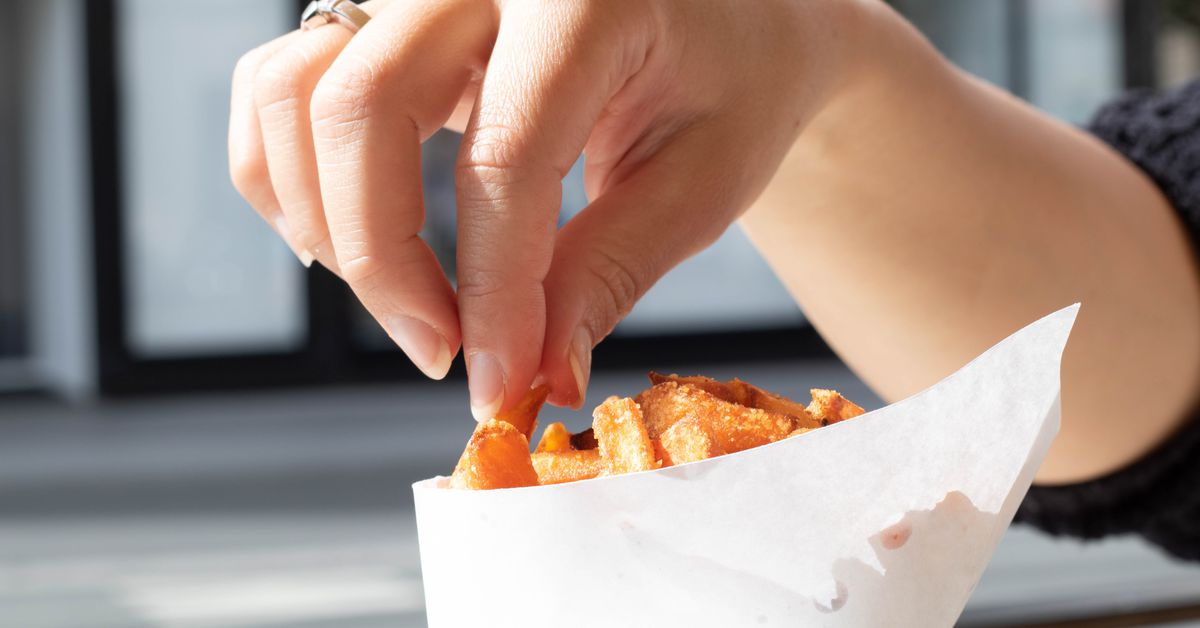 Women be daring to ask for food

totally, what a stupid trend - who thinks stereotypes and mockery are funny anymore?

what a stupid trend

Indeed. Life is already overly full of fuckwits and fuckwittery without anyone thinking they need to add to the collection.

Regardless how you read the tone of the article, it highlights a real restaurant need. I’ve never seen the menu tricks described, but I would love the option of different portion sizes. Some restaurants list the more interesting items in starter and main sizes and corresponding prices. I love that. I would like an expansion so that we could order an enhanced size of sides like spinach or the mentioned fries.
The problem with the article is that they wrote from the POV of date and body politics. No, no, not good and not necessary since the original premise might well stand on its own. i.e., diner’s ability to order by portion size.

I don’t understand how this eater post is “stupid food reporting” because 1) it is not stupid and 2) it is not reportage but commentary.

Whatever we think about restaurant portions (goodness knows most are too large and lead to waste— or as the body police might add “waist”— the gendered aspect of this menu item is gross and damaging for reasons noted in the piece.

That a “girlfriend” is not meant to be hungry when out on a date, or eating with a man is already something to reflect on. So too is the idea that a few items off of one’s plate is an affront against all that is decent (although yes, ask first, and don’t expect “yes” as the answer— which goes for so much). But what we also have is the idea built in that food is to be ordered, pleasurably consumed by the man, whereas the woman needs subterfuge. The expectations of making visible what the woman (as “girlfriend”) will consume seems to highlight the transactional nature of a dinner (beyond diner and restaurant) and that, too, is something the writer observes.

This could be so easily managed by removing the gender from this with an offer “to share” or even “I know someone’s going to ask me for one”. This no gendered expression turns it into a more open and broadly recognisable situation without the baggage that makes some of us lose our appetites.

I appreciate the different take aways expressed so far. I need to re read the article to see what set me off so critically.

I think most of us (me, certainly) are saying the trend discussed in the story is stupid, not the story itself. But I can see how the thread title is somewhat misleading.

Hmm…but if you read through the whole article, the writer actually circles back to some of the points already posted here in the response. The writer even calls out this menu trend as “misogyny” – the post acknowledges and even espouses the idea that the “oh so clever menu trend and naming” really isn’t that clever or that cute, and is just based on a outdated stereotypes and assumptions.

Is this a thing, today?

I’ve re read the article, and I’m adrift. Does anyone go out on a “date” knowing that a “meal” will be involved at some point; sit at a table, and order nothing, while their companion eats?

Honestly, I’ve not seen this played out in all my years of living.

The article/story/commentary is an exercise in societal misandry. If a women says she is not hungry and doesn’t order then the man orders for his own appetite. Stop playing games and order what you want when invited to do so. If you want fries, order fries. If you only want a few say so and your partner/date/host will order a bigger portion.

The late lamented Sandrine’s Bistro, in Harvard Square, catered to the college dating scene by offering medium and large portions of most of the menu items. Wish I could recall the terminology used, but it was gracious. The chef/owner was Alsatian, and the ambience more than semi-formal, but the pricing options enabled students on dates AND budgets to enjoy an occasional fine dining experience. They might need a late-night PB&J, but they wouldn’t have left Sandrine’s hungry.

Maybe restaurants could consider renaming the kiddie menu section, keeping the classic items but adding smaller portions of some of the most popular items. The girlfriend portion IS sexist.

I would have to agree with the part about being honest, but sometimes I’m just trying to make good choices, and find it much harder when my dining partner is scarfing down a pound of tasty fries. You don’t have to be hungry to want some fries. My blood sugar can’t handle it like his. I’m trying.

The article/story/commentary is an exercise in societal misandry.

Here we have an article describing a practice that denigrates women, but won’t someone PLEASE think of the men. For it is they who are truly harmed. Truly.

We usually eat dinner out once a week. It’ll usually be two courses - starter and main. From time to time, one or both of us will have dessert. It is, as you say, all about choices. It no longer surprises me how often I order the “girly choice” - the prawn salad followed by the grilled sea bass - whilst Mrs H is tucking into the black pudding wontons then the lamb rump

Indeed. I remember lamenting to a fellow traveler that dining out for two or three weeks in a row caused major overload. She looked at my plate of some kind of traditional but rich and heavy food and quipped something like “Well, you could order something light.”

Well, sure, I could also stay home!

Well, sure, I could also stay home!

Oh, I know that scenario very well. We visit Tenerife for three weeks each year and, whilst we rent an apartment, we do not eat in for dinners or about half of the lunches. Eating in Spanish tourist resorts is not a task for the would-be weight conscious. A 3 kg weight gain is about normal for the trip.

Ugh, for me it should be called Mom and Annoying Sister portion. Both like to cast their aspersions my way with ordering too much (in their opinion… Like how one dares to order appetizer and entree

). Make rude comments about my unhealthy eating, and then effing pick of my plates or my snacks at home if I’m eating them. Yeah…

Anyway… It’s one reason I do like the trends to small plates / tapas-like dishes . I find myself sated with ordering 2-4 small plates… Get a variety and usually better overall portions. If you want more, just order another order.