The Vietnamese banh mi is one of my favourite meal-on-the-go whenever I’m in Vietnam. Regional variations exist - banh mi in the northern part of Vietnam and Hanoi tend to be meat-heavy, with no vegetables or greens of any sort, whereas in the south and Saigon/Ho Chi Minh City, the banh mi would include pickled carrots and radish, fresh coriander leaves and cucumbers, beside chả lụa (pork sausage) and homemade pâté.

The Hue version of banh mi in the Central Vietnam region does not vary much from the southern/Saigon version - maybe all the regional versions are slowly converging, becoming more similar in some ways. But the denizens of Hue still have a much higher threshold for chili-spice than Saigonites, and eschew the sweeter condiments which Saigonites seemed to favour.

My first Hue-style banh mi was from this little pushcart, Mi Heo Quay on Đường Hùng Vương, a busy side-street behind the Imperial Hotel where I’m staying on this trip. It’s near the intersection with Đường Nguyễn Tri Phương. 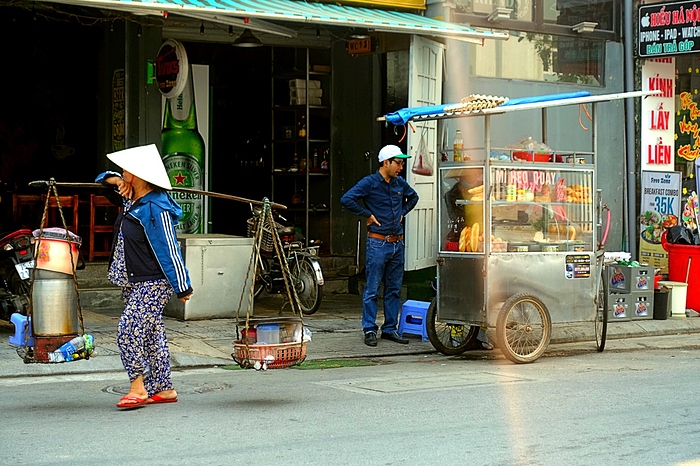 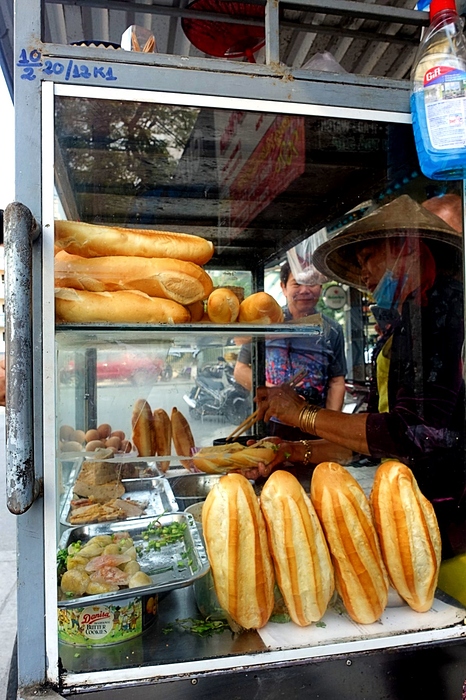 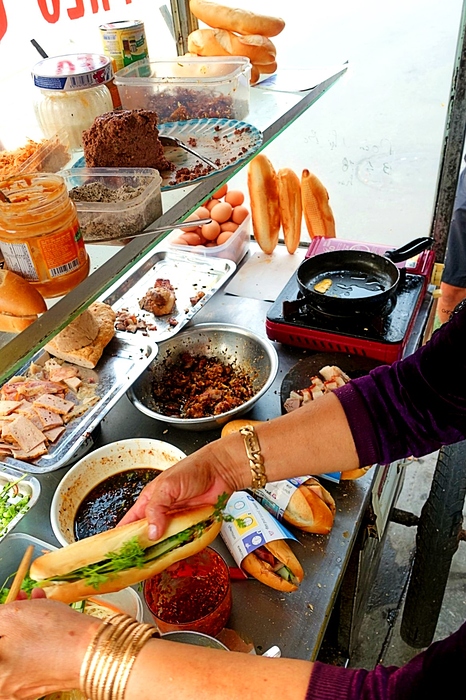 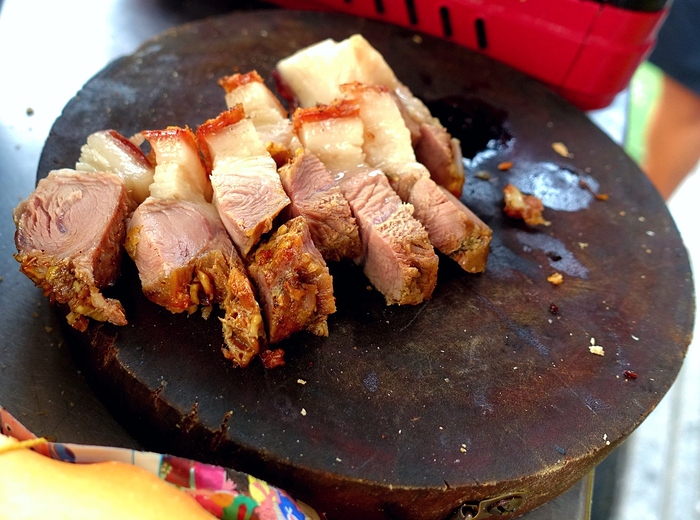 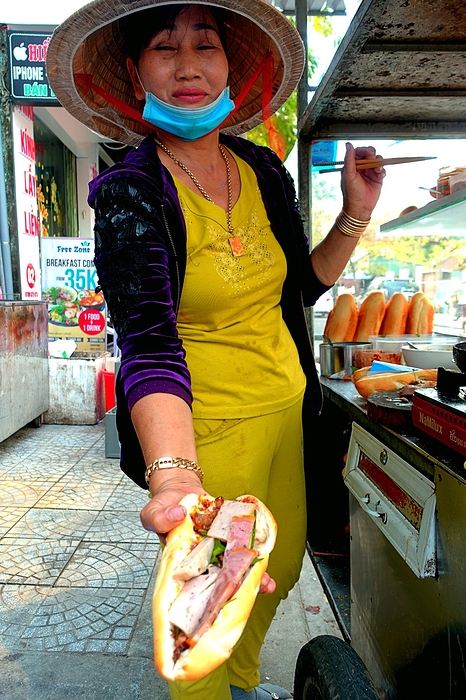 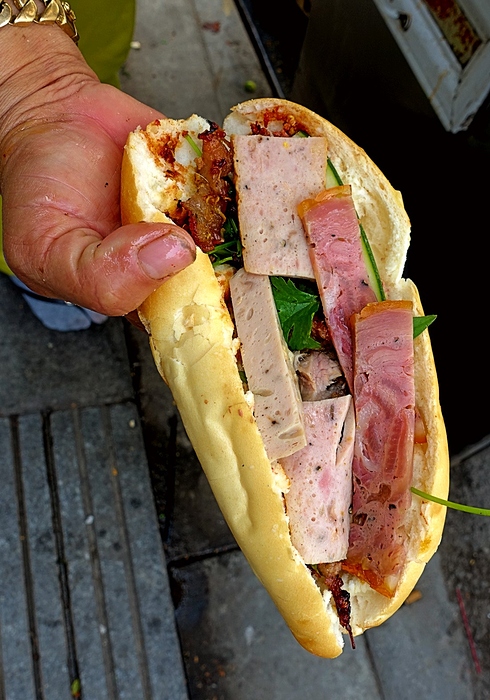 Fresh coriander leaves, thinly-sliced cucumber and pickled carrots & daikon completed the sandwich. It was, in one word, perfect!

There’s a rival banh mi stall right next to it - maybe I should come back another day and try it. 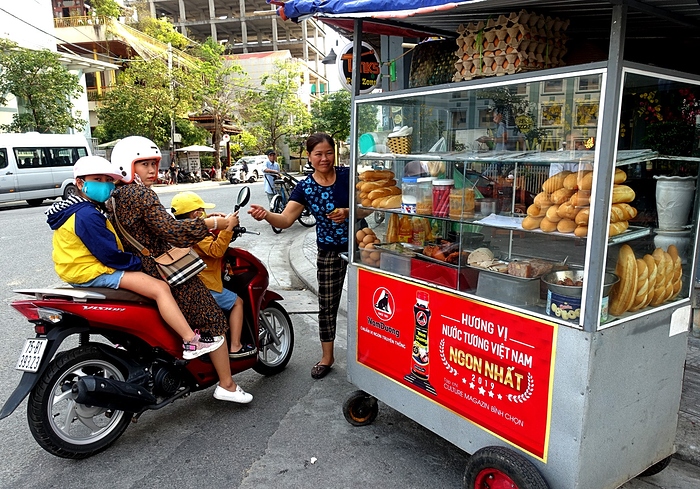 Jealous! Around my parts it’s mock bahn mi at best…starting with the bread.

Agreed – the baguette is key.

Come to SF. We have literally a score of really good banh mi places.

You sure do! That’s exactly how I know the difference.

Love Banh Mi every which way, especially the pork filling. Never knew how the pork (with rind) is seasoned and cooked.

Ate this in Vancouver, Canada but it’s the same in VN. Can someone tell me more about the pork? The rind looks very red. Au Petit Cafe is a small restaurant that also sells Banh Mi. 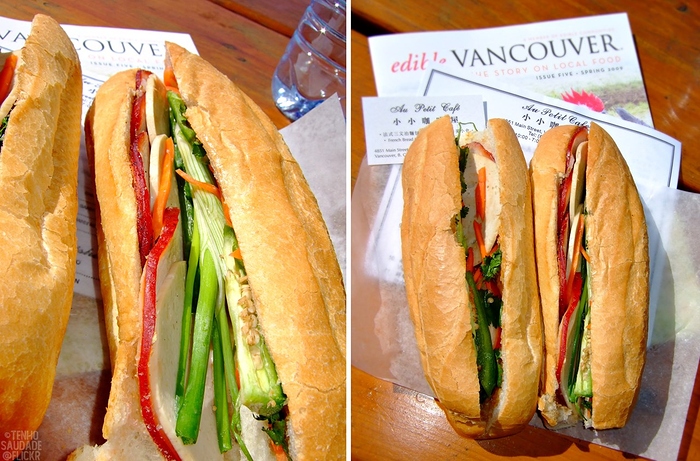 good to see how it’s done there, peter! in london the banh mi is pretentious (often translating to expensive) or disappointing - my opinion. toronto was another story. the traditional places sell them for very very little (although the prices are climbing) and with the cold cuts and the pickles and vegetables - generally satisfying, they pile them very very high in the window and they all get sold. the sons of the most popular banh mi sellers opened their own trendier place where it’s always packed and the meat or tofu is freshly grilled but the buns are crustier so a bit more chewy. i prefer the softer bread. i love the combination of hot savoury grilled meat with the tangy and the cool and the spicy vegetables. i must add photos!

i prefer the softer bread. i love the combination of hot savoury grilled meat with the tangy and the cool and the spicy vegetables.

Yup, same here.
I rather liked how the Vietnamese are able to adapt the French baguette and make it their own - same crusty exterior, but a softer, fluffier interior.

I rather liked how the Vietnamese are able to adapt the French baguette and make it their own - same crusty exterior, but a softer, fluffier interior.

This type of thin crust fluffy baguette exists in France, though longer and thinner than the Vietnamese version. It’s the industrial version sold in supermarket here, a smaller similar to the Vietnamese ones are found in restaurants or canteens. It is okay only when it’s fresh. I think this bread works very well with banh mi due to a more neutral taste compared to a traditional baguette here. I saw many banh mi sellers in Vietnam equipped with a small toaster to crisp and warm the bread for each client, which makes sense as the humid climate probably soften the bread. 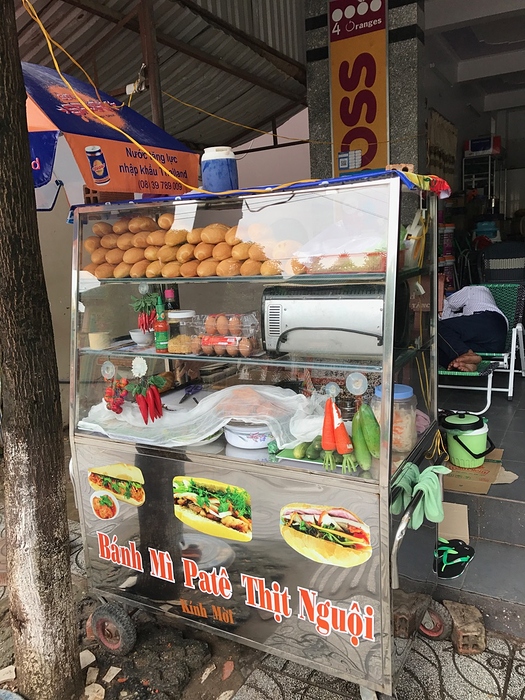 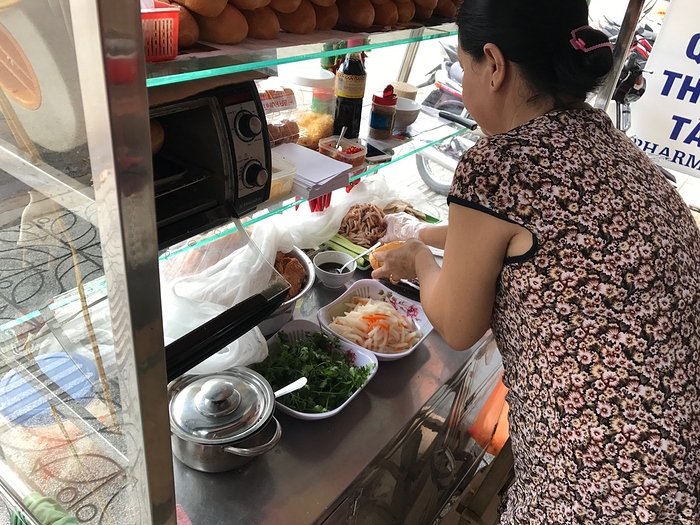 We asked to include all the herbs, chili and sauce. 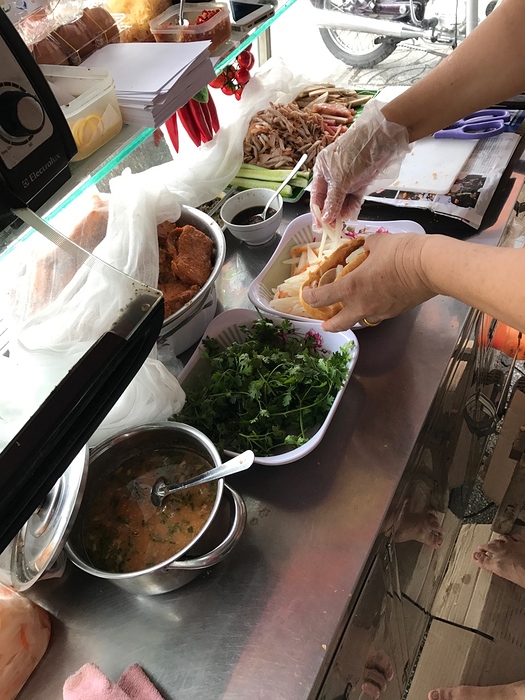 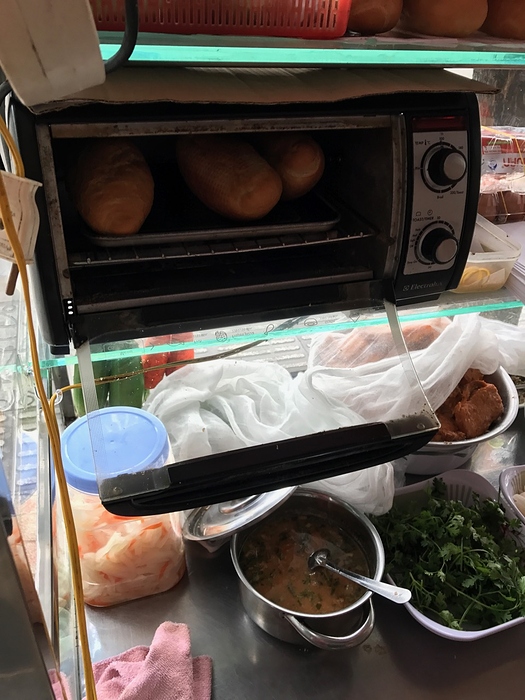 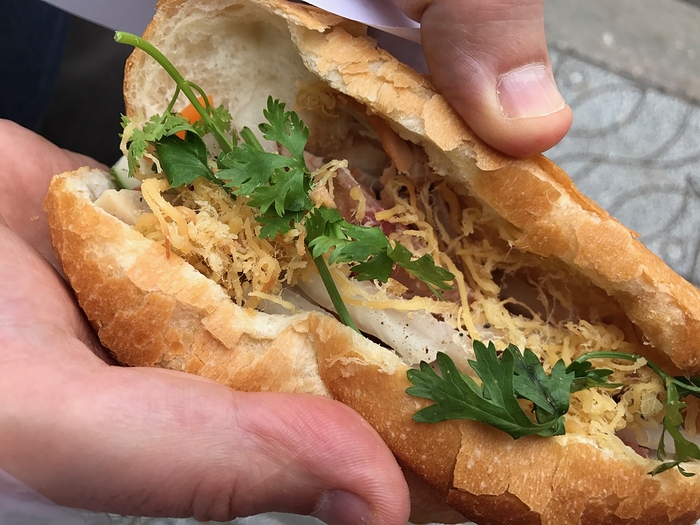 Assorted pate, I believe one pate is made with ‘raw’ meat, maybe fermented, still looked reddish. 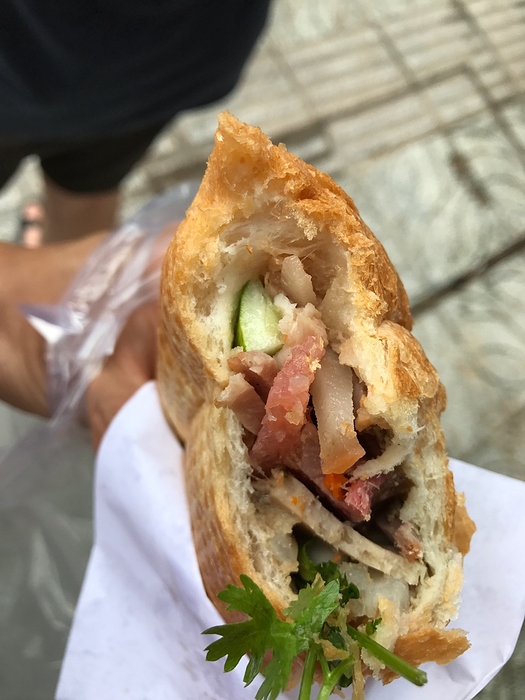 Saigon’s popular Lesbian Banh Mi (so-called as it’s run by a lesbian couple, since the 70s) is famous for its baguettes, which were kept warm in a charcoal-fired oven.

Banh-mi in general is fine in Paris, many older places are actually owned by Vietnamese who came to France as refugees. One big difference I would say is the size. In Vietnam, the street vendor version is more a small snack. I think to adjust to the Western sandwich culture and to justify the price they are charging, banh mi is a whole meal and lots more meat and ingredient.

1 Like
[Hue, Vietnam] A Complete Guide to Dining Out in Hue, the Imperial Capital of Vietnam
Help cover Hungry Onion's costs when you shop at Amazon!