How would you "American-ize" a dish?

I’m making a YouTube video this week on Oyakodon (oya = parent, ko= child, don=rice bowl) or Chicken and Egg over rice. I made (and ate) five today. As I was doing it, I wondered how I could change it to make it “American” but still keep the concept: Boiling/Poaching meat with egg and serving it over rice. I was wondering how to American-ize the flavors and wondered if any of you had any idea, humorous or serious.

The dish is flavored with dashi, soy sauce, and mirin (and/or sugar and sake).

Off hand I was thinking Chicken and Bacon, dashi, mirpoix or
Chicken, bacon, beef broth, mirpoix.

Any thoughts on what flavor profile or ingredients can “American-ize” a dish? (It doesn’t have to just be this Oyakono, I’m curious what the American flavor profile means to you.)

Put cheese on it. There are already ramen recipes that include American or Parmesan cheese. 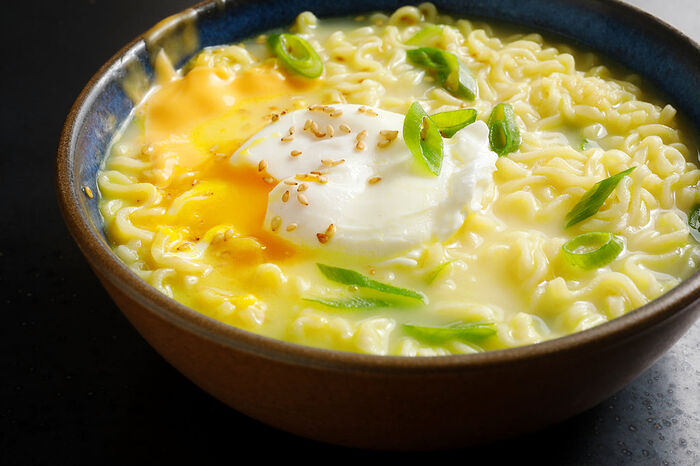 Make some instant ramen Slide an egg into the hot broth, then some butter Crown the steaming noodles with slices of American cheese 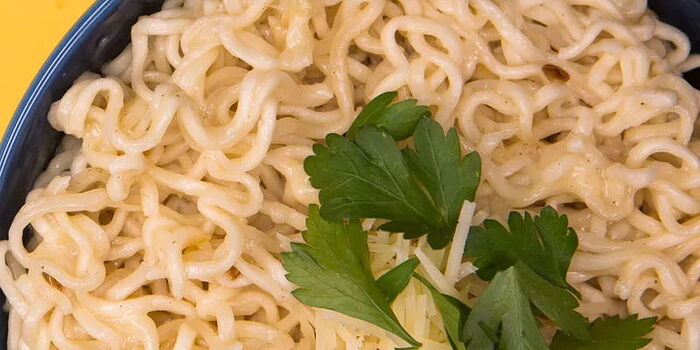 Made With Creamy Chicken Flavor Ramen

Plenty of chicken and rice/chicken and noodle
dishes in America so an interesting question that I have to think about.
edit: definitely salsa, peppers or some heat component. Served over white bread or tortillas.
And a green vegetable component.
Broccoli, green beans , peas, asparagus, etc.

I, too, was going to suggest frying the chicken, after all frying is just boiling/poaching in oil

Japanese cuisine already has Kewpie mayo in plenty of places, how about ketchup (or ketchup-y BBQ sauce) or ranch dressing?

But yeah, frying, bacon, beef, cheese … also make it a ridiculously huge portion, we like that too!

Will you present both versions in your video, the real one and the American one?

I made three version of Oyakodon in the video. I thought it’d be funny to cap it with a fourth either “serious” America-don, or something funny like a cheeseburger on rice.

I find the idea that one “Americanizes” a dish by adding salsa and tortillas … interesting.

What could be more American than Mexican food?

Top it with Ranch Dressing.

Add ranch dressing and/or a slice of melted provolone.

I made three version of Oyakodon in the video. I thought it’d be funny to cap it with a fourth either “serious” America-don, or something funny like a cheeseburger on rice.

Or hot dogs, maybe? (Not that I would recommend!)

Your post made me think of a college friend whose American family lived in South Korea for a few years when she was a kid. A Korean housekeeper cooked for the family.

The housekeeper used to prepare (previously cooked) hot dogs with a rice and seaweed wrapper, as you would a sushi maki roll. She thought those American kids would be delighted by “hot dog sushi.” They were.

how to American-ize the flavors

In most of the US, the American palate is more adventurous than it once was. There are some things that many Americans associate with “good.” You’ll have to know your audience. Not all tastes are universal.

Bacon is a vegetable; it’s good for you. You can certainly poach chicken in chicken broth - I wouldn’t use beef broth. Hot sauce at least on the table. Lots of sugar - ketchup makes that easy. If you use dashi add salt (not for me, but many Americans). Mirepoix or the Cajun trinity in the American South.

What I would do is have salt and hot sauce on the table and make oyakodon classically.

The stereotypical American flavor profile has lots of fat, sugar, and salt. I know that is far from universal and is likely a minority preference by now.

The only American food I can think of is of the McDonalds and Burger King variety.

Americanizing would be to add sweet orange flavors to chili paste poured over a battered poultry dish, or maybe adding a nongooey cheese like proceeded American to make a queso.

Fried chicken.
Some take on deviled egg
And make the rice a take on rice with condensed soup casserole style.

It actually could be good.

Some take on deviled egg

Deviled eggs date back to ancient Rome and are popular in the Americas and Europe. I wouldn’t consider them particularly American.

Condensed soup is an American innovation. I’m not a fan myself (too much salt) but it is “ours.” Cream of nearly anything for casseroles does seem to be American also. Any other places it is common? I know you can find Campbell soup in UK and EU markets - I don’t know if the casserole hack is common.

Some of you are being a little hard on American cuisine. Imo. I’m saying that as a Canadian who seeks out American regional foods whenever I visit. I can’t visit right now due to Covid, so I’ve been making some American foods at home. Cobblers, Country Captain chicken, Detroit style pizza, Sonoran hot dogs, baked wings, oven- fried chicken.

My last visit was to DC in Nov 19, preceded by a trip to NYC in Aug 19, a trip to Canton OH (where we had a wedding with a Pittsburgh cookie table) and Maui/Kauai/Oahu in May 19. I won’t list all the regional foods I tried, but I’d say half of what I ordered was regional.

There is so much good food in America.

The too sweet, too salty processed food is global.

Re: devilled eggs. Many American foods had a beginning elsewhere. Frankfurters. Hamburgers. They became part of the American canon. I associate Devilled Eggs with American cooking, they’re in a lot of American cookbooks. And there are fancy Kimchi devilled eggs at Spinster Sisters in Santa Rosa, which are an American invention. I dislike kimchi, but those kimchi devilled eggs are something my foodie cousin loves. Might be one of her top 3 foods.

Here’s a recipe for the Americanized, Northern Californianized Deviled Eggs. 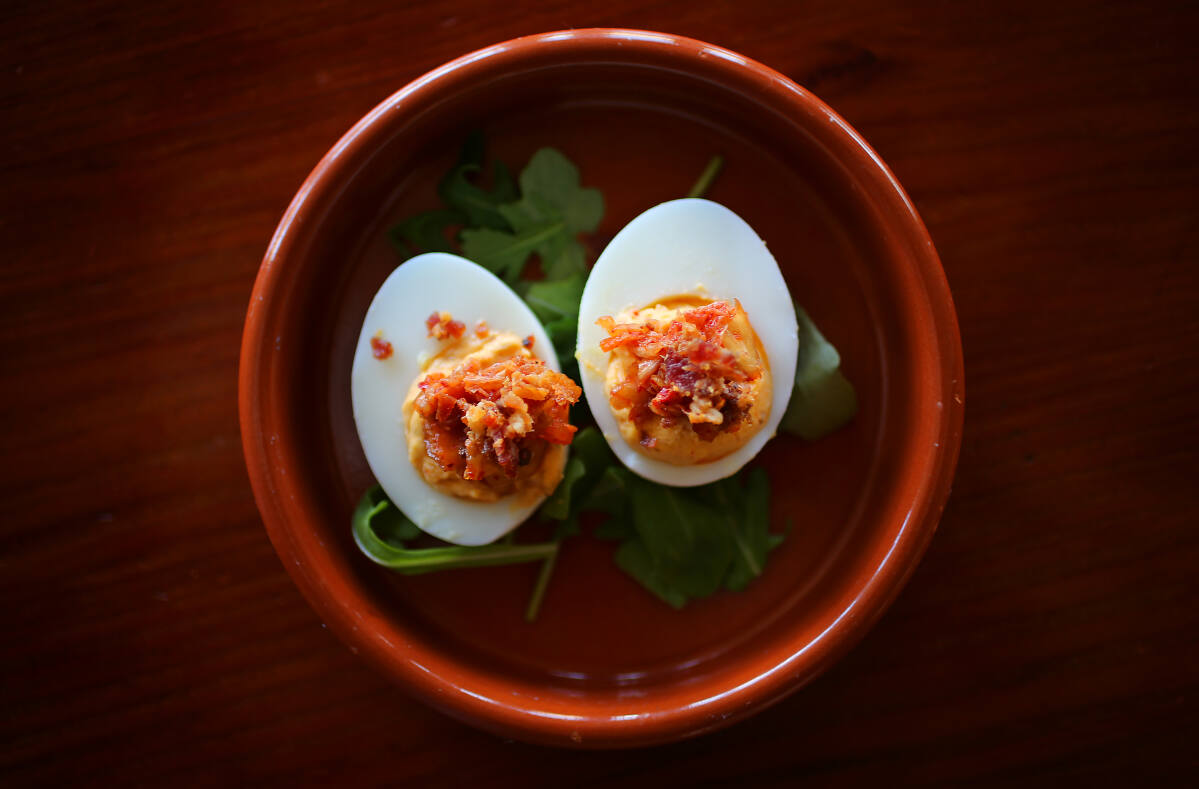