How even does carbon steel pans sear and is it important at all when searing ?

Thick Pork chops were on sale this week, so I bought a dozen to make a highly unscientific test of my Copper pans, Carbon steel pans and PLY pans up against each other.

I also did some strips of bacon in each type pan.

To my surprise the results were all pretty good when it came to searing the pork chops.
I like a good dark crust on my pork chops and to be honest I think the Darto N25 gave the best most even sear of them all, but they were all pretty close.

I then did a bacon test. Cooked 4 pieces of bacon in each pan starting out with a cold pan and tepid bacon in the pan without adding oil or fat to the pan. Then slowly heating the pan up. All pans made perfect evenly cooked bacon EXCEPT TO MY SURPRISE the Darto N25, where the bacon stuck badly and I had to scrape the bacon off with a spatula.

Do you find it’s important to use an evenly heating pan, when you sear steaks ?

The photo is my Darto N25 with two surprisingly evenly seared pork chops. 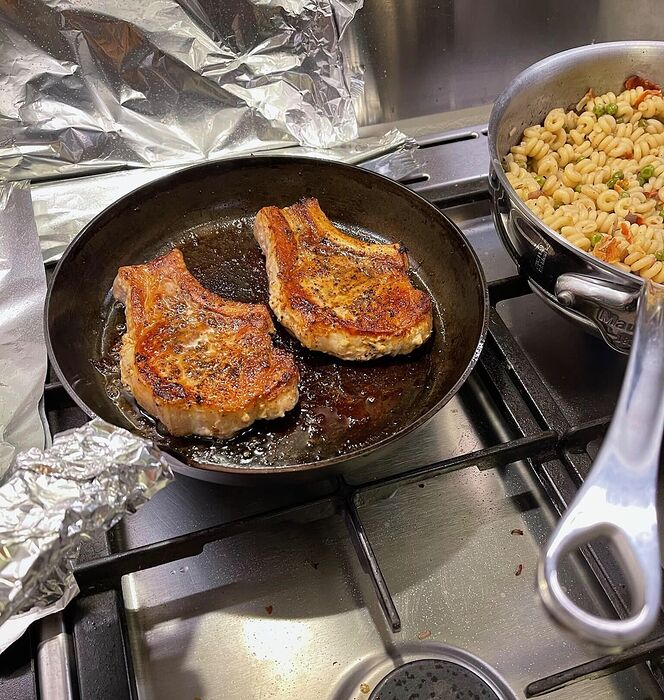 I do not find using an even heating pan necessary. Carbon steel maybe a relatively poor conductor, but it does eventually conduct heat. If you give it time to heat, it will get hot all over. If it has decent mass it will also hold a good bit of that heat when the food hits the pan. It might not rebound as quickly or evenly as other materials, but once you get to know it and the way it pairs with your stove well, it is quite manageable.

Re the original question: well, you know my answer already…

IME evenness is less of an issue with high heat searing. It’s not like you need to cook a steak for 30 minutes before it’s done. It’s usually a quick exercise - chops and steaks do not need long to cook.

Plus you only need evennness the size of the food - typically one or two steaks. And you can always cook the meat to done in the oven. You only need the ‘sear’ that is the browning of the outside.

For a big pan of say chicken pieces or 4 large pork chops I think evenness becomes more important. That’s why I have the Fissler 32 paella pan, and also love the Paderno GG 28 paella I used to have and gave away to a friend who also loved it.

Honest question, why were you surprised by the good results of the carbon steel?

IMO, one (or two small) steak in an appropriately-sized carbon steel pan atop a reasonably powerful, even and matched hob is a good combination that shouldn’t cause worry over pan evenness in searing.

But a 12" CS pan, 4 steaks, a weak, uneven or undersized hob, you would probably notice some unevenness in the sear. But if you’re good, you can move the steaks around within the pan as a partial workaround.

The virtues of CS are: low cost, relative lightness, durability, and near-nonstick in spite of the poor conductivity. Oh, and some people like the restaurant-like appearance.

You are spot on, but I am also glad you referred to moving things around. I actually get decent evenness doing two skirt steaks in a heavy 14.25" carbon steel pan on a hob that is not nearly wide enough. Butter, movement, and a bacon press!

My meat exteriors improved exponentially, no matter what pan I use, when I started adding butter as a final step for searing.

I didn’t get a chance to reply, but yeah, pretty much moving the foods around on the pan will solve the problem.

results were all pretty good when it came to searing the pork chops.

Hi Claus. Given you had quite good/even results with the pork chops (which look lovely, by the way), what do you think was going on once you started the bacon in the cooled pans and had a not-great result with the CS?

I’m curious because I’ve done thick bacon in my (now) seasoned hard anodized aluminum and several times in the 5-clad stainless, but have not as yet cooked bacon in my CS. So I’m wondering if you have insights as to why that one does not do as well.

If it’s something systemic (relating to the pan itself), the I might continue doing bacon in the stainless or etc. rather than risking messing up my (by now, quite great) seasoning on my CS pan.

If you’re moving one steak, it’s easy. Three or four in a full pan isn’t.

Hi Claus. Given you had quite good/even results with the pork chops (which look lovely, by the way), what do you think was going on once you started the bacon in the cooled pans and had a not-great result with the CS?

I’m curious because I’ve done thick bacon in my (now) seasoned hard anodized aluminum and several times in the 5-clad stainless, but have not as yet cooked bacon in my CS. So I’m wondering if you have insights as to why that one does not do as well.

If it’s something systemic (relating to the pan itself), the I might continue doing bacon in the stainless or etc. rather than risking messing up my (by now, quite great) seasoning on my CS pan.

I have no clue why the bacon stuck so badly in the Darto CS pan. I was actually a bit surprised. Maybe it’s the fact, that i started my bacon in a dry cool pan. I honestly don’t know, but it was the worst bacon I’ve cooked in my life.
Since I’m a unitasker person - I belive that different pans excel at different things, I have found carbon steel pans excel for at searing thick pieces of meat, and that’s pretty much all I use my carbon steel pans for.

I know many carbon steel users love their CS pans for bacon, including my father who cooks bacon every day in the De Buyer Mineral B pan I gave him 5 years ago, it was probably user error.
I placed the tepid bacon in a cold carbon steel pan without any oil or fat added and heated it up slowly on low for several minutes before raising it to mid heat and the bacon pretty much immediately stuck to the pan. I normally will wait for meat to release by itself, but this bacon started to turn very dark so I had to take a spatula to scrape it off unless I wanted my bacon to sear totally black.

Let’s just say, that I’m not cooking bacon in my carbon steel pans again - too many other great pans in my arsenal for that

What works for me when frying bacon is to add water to the pan with the bacon.

Cold pan. Add the bacon and enough water to come up 1 cm up the sidewalls. Heat on.

While the water evaporates, the bacon ‘cooks’ to doneness, and then when the water has evaporated completely, the fats of the bacon will fry it beautifully. You’ll end up with crunchy bacon, while still soft inside. Learned it from youtube a long time ago.

By the way, how did you find the Mauviel 250 performing in this experiment of yours?

Sear, finish in the oven:

How To Pan Roast A Steak + Pan Reduction Sauce - YouTube

You don’t get the last exploding water droplets spattering hot oil all over you?

No, there are no exploding water droplets. It’s all a very civilised affair. And one can always turn back the heat a bit.

Added benefit: the water will have helped increase the evenness on the pan floor when the bacon starts frying.

I’m confused. Is this American, i.e. streaky bacon, or back bacon? Water in a frying pan I will use for cooking link sausage; it helps cook the insides so you don’t have to rely solely on the browning that takes place when the water has evaporated. If I pan fry bacon (which I rarely do) I start with a cold pan.

I don’t know what damiano is cooking. I mostly cook streaky bacon

All I know is whenever I’ve been in a hurry and used a partially wet pan for frying, burning oil bomblets get thrown out when the water flashes to steam.

Ah okay. But then you’re mixing oil with water. Yes, that’s a recipe for disaster.

With the bacon in water, once the water has evaporated, only then will the fat on the bacon starts to fry. So they are two distinct - subsequent - processes.

I sometimes also cook fresh sausages in 1-2 cm of water. But because sausages do not have enough fat on their own, I need to take them out, clean the pan, add oil, and then fry the sausages to golden brown.

By the way, how did you find the Mauviel 250 performing in this experiment of yours?

I still don’t like the low sides of the Mauviel M250c frying pan, but steam probably escapes even faster than in other pans because of these low sides - but so does splatter pretty much all over the stovetop.

But, your other pans do not cause a lot of oil splatters everywhere?

Because for me it doesn’t really matter which pan I use - if I’m searing meat, I will get a dirty stove. Even when I’m frying chicken pieces over medium heat in my 30cm Le Creuset with 8cm tall sides.

By the way, what is that dish next to the pork chops? Some pasta dish it seems?