How do you really clean a pot to remove taste in water?

I use a sauce pan to boil water for drinking. But that adds an odd taste to the water. The obvious solution is to boil water in a water pot or stop using that pan for cooking. But if those two aren’t options, how would you really clean the pot so the water tastes like water? The pot doesn’t look dirty to me though I am sure there are residuals that I can’t see.

My current solution is dish soap and a scouring pad like this: 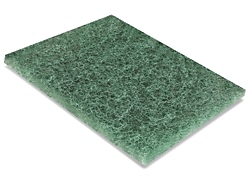 What is the material of your pan?
Maybe to clean it well, use vinegar, bring it to a boil, add baking powder.
You should reserve 1 pot to boil water.

I use a water jar with a carbon filtering system and tap water. Not the best, nor the worst.

Thanks for the idea. I will give it a try. It is stainless steel.

A woman specialised in tea told me that water boiled in different matter has different taste, iron gives a slightly sweeter taste to tea, another metal another taste, clay etc, glass and ceramics (glazed) should give a neutral taste.

Maybe you just don’t like the taste of stainless steel.

There was a bit on the old Mary Tyler Moore show which got laughs - Mary wondered if you need to wash a pot if all you did was boil water in it, the answer being of course not.

Not knowing where you live or whether your water supply is unreliable or you are just worried about it, it’s impossible to pinpoint the problem. If you have very hard water, a chalky residue of minerals would eventually build up in the pan but in general, with a stainless steel pan, I doubt that the pan is the issue. If you take any daily medications orally, that might be it. Many of them affect the taste buds. Or, maybe what you are tasting is the dish soap. You shouldn’t need to be cleaning the pot at all.

If you have a microwave, try boiling water in a glass cup/bowl. If that also tastes odd to you, the stainless pan is not the problem.

As to naf’s suggestion, it would be baking soda, not powder.

As to naf’s suggestion, it would be baking soda, not powder.

Thanks for the correction. I didn’t even see this orthography.
Must be the hot temperature today.

Try boiling in an enameled type pot Those thin enameled pots are cheap .

Viola. Its not an issue of pot cleanliness. Boiling water in glass/ ceramic gives water that taste the same as water boiled in a pot.

Should there be a reason that water changes taste when boiled?

Should there be a reason that water changes taste when boiled?

Boiled water is flat, due to the air being boiled out of it. You could aerate the flat water by transfer back and forth between two containers. May not be your solution, just a thought.

Why do you feel you need to boil your drinking water?

FWIW, be VERY careful boiling water in a microwave. For reasons related to surface tension, water can become superheated. When the tension is broken, boiling water can geyser out, scalding you.

I don’t. Since our water filter broke, another person in the household want the water boiled. I still drink from the tap.

Thanks for the tip- I normally don’t boil water in the microwave. Its for this experiment only.

I think Google Gourmet got it right here. Freshly boiled water will taste different because the air has been boiled out. If you wait or aerate the boiled water, then eventually it will taste the same.

But if those two aren’t options, how would you really clean the pot so the water tastes like water?

I think, it is better to ask professionals to do it for you. The first time of this professional service usage was not easy, as I didn’t believe anybody can do it better then I. But after it I started to work with them all the time.

Google-Gourmet nailed it - no air in the water, same as distilled water if you have ever tasted it. It would probably make good ice cubes IMO.

Think you either need a new water filter installed at the sink, or use something akin to a Brita pitcher.

There was a bit on the old Mary Tyler Moore show which got laughs - Mary wondered if you need to wash a pot if all you did was boil water in it, the answer being of course not.

From people who don’t live with a well that produces hard water.

Since our water filter broke, another person in the household want the water boiled.

Not a scientist, is he or she. Household water filters are generally particulate only and don’t stop bacteria or viruses. In fact that provide a growing media for bacteria.