How do you eat wheat gluten? A2 Kau Fu is quite the tasty wheat gluten appetizer at Gourmet Noodle House - 3751 Geary Blvd. at 2nd Avenue. 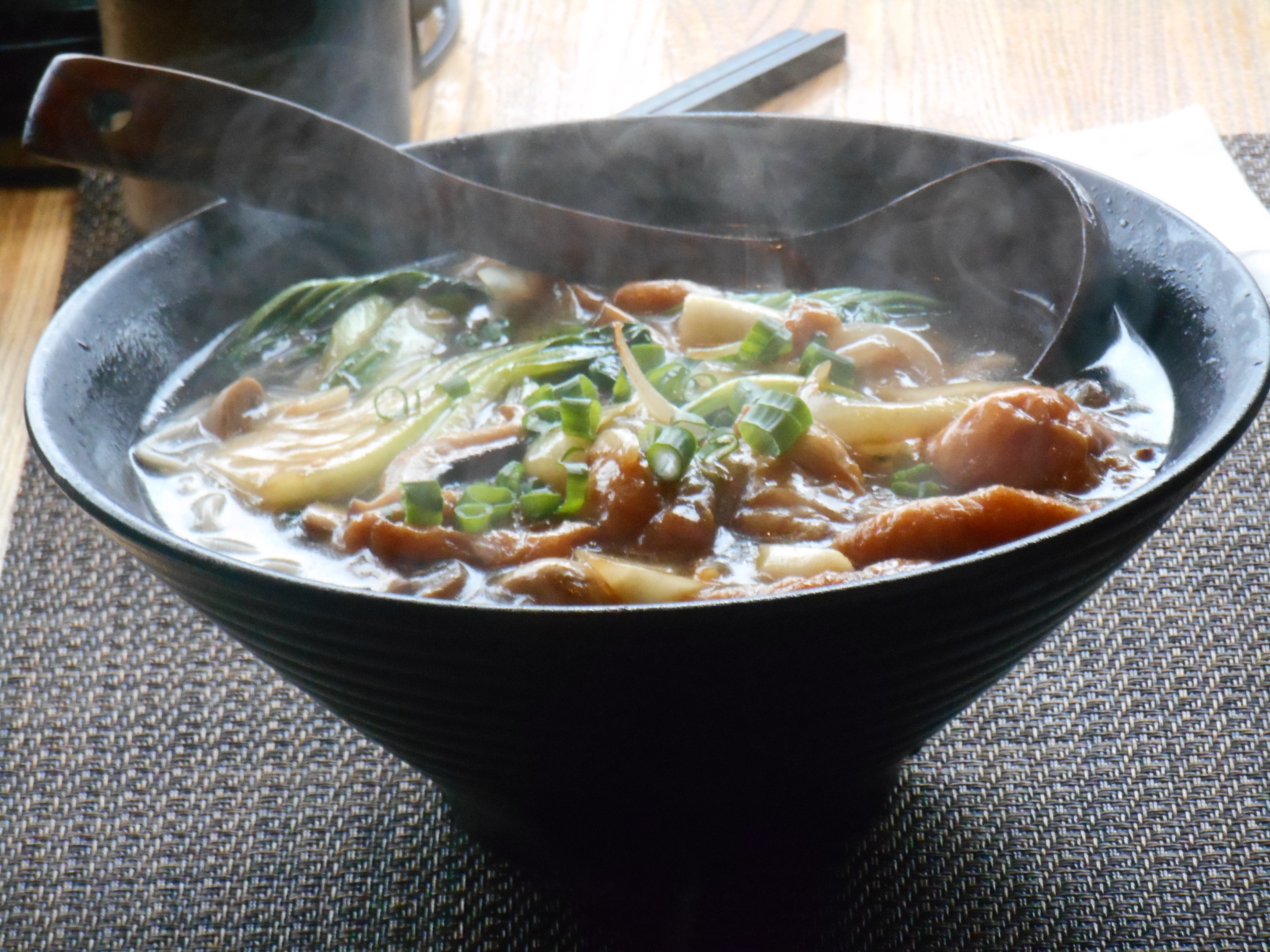 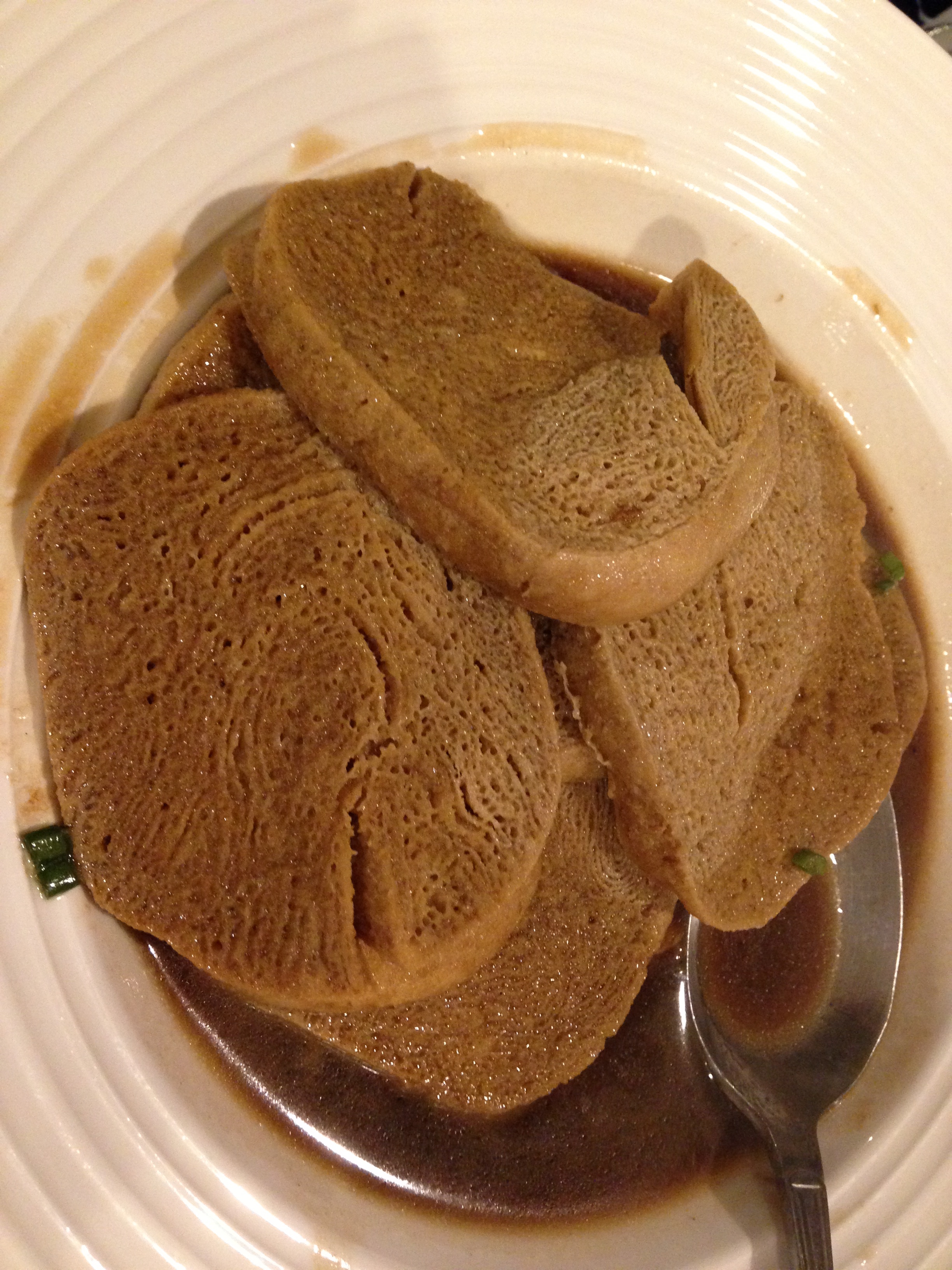 “Steamed bean curd roll” at Taste of Jiangnan tastes like gluten to me.

As Souperman and others have discussed on Chowhound and on SF Gate, the Inner Richmond now has a Jiangnan-style restaurant. Jiangnan refers to the area south of the Yangtze River, and the cuisine is usually lumped together under Shanghainese label. There has been a general decline in Shanghainese restaurants in the Bay Area, so it’s good to see the emergence of a restaurant with both good food and a focus that distinguishes itself from all-purpose Shanghainese restaurants. [image] An appetizer…

Between you and hyperbowler you’ve nailed the three main forms of wheat gluten used in Chinese cuisine, at least in the Jiangnan cuisine I am familiar with.

Kaofu (烤麩, literally “baked bran”) is usually used in a braised vegetarian dishes like the one in your picture from Gourmet Noodle House. I find it interesting that it remains so little known in the US despite that fact that most Americans (including myself) fall in love with it at first bite. The fact that it’s made from bran accounts for its nice nutty flavor.

The “Gluten Double Mushroom Noodles” you had at GNH appears to contain you mianjin (油麵筋, lit. "fried wheat ‘tendon’ "). These start out as hollow balls of puffed-up fried gluten, so light that you’ll see people at the Wuxi train station carrying bags of them that are almost as big as a person, on their way back to Shanghai.

You mianjin most often are used in vegetarian braises or soups. My wife’s version of this dish shows them more clearly: 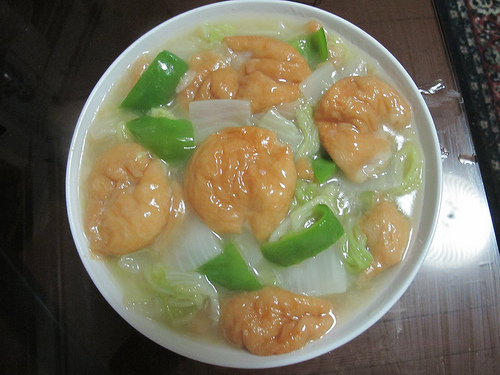 She also makes a carnivore version, were the balls are stuffed with ground pork and braised in soy sauce: 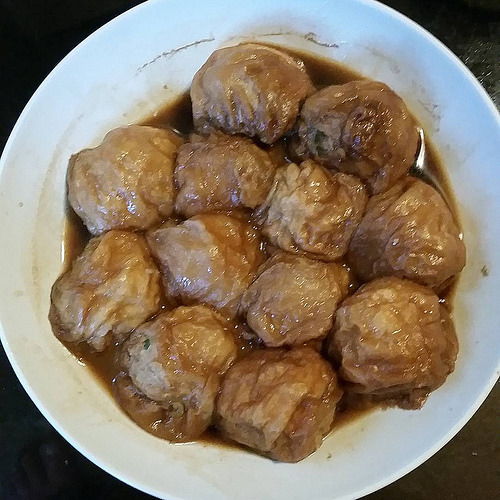 The third form, in the picture posted by hyperbowler, is the steamed version. According to Wikipedia, it’s known as 蒸麵筋 (Steamed mianjin) but my wife usually refers to the product as 素雞 (su ji, “vegetarian chicken.”

It is, in fact wheat gluten. See my followup post to Cynsa’s OP.

you’ve nailed the three main forms of wheat gluten used in Chinese cuisine, at least in the Jiangnan cuisine I am familiar with.

Thank you for the tutorial!

The gluten balls need to be rehydrated before eating. If you get Kau Fu at the supermarket, is it ready to be heated and mixed with a sauce, or does it need to be further cooked in some way?

Does anyone know of a good version on the peninsula? The best I’ve found is the four treasure kaufu at Little Shanghai in San Mateo. It’s not very subtle— it’s saturated in a syrupy sauce, but I’ve not found better.

Lucky Creation in Chinatown sells a bunch of vegetarian gluten preparations by the pound (curry, sweet and sour, etc.). They make a good snack when in the area.

Does anyplace grill gluten? I once had a Thai skewer of gluten that was better than most meat versions, but that restaurant has long since passed.

The smoked gluten (mock duck?) almost squeaks and had a light smoke. I liked this a lot. The cross section looked laminated.

The kau fu with carrots, edamame, and shiitakes was okay. Irregularly torn kau fu was good, but I didnt dig the Mushy carrots.